KKK targets Clemson in a recruitment drive: ‘We are very much still relevant’

There were two other racist incidents on campus

Members of the Ku Klux Klan are posting flyers on Clemson’s campus in an attempt to recruit new members.

The KKK members and students were interviewed after the incident.

The members claimed that they were targeting Clemson’s campus only because we have a large population of students. The flyers were not only placed on Clemson’s campus, but also throughout Occonee County.

According to Rob Locklear, a member of the KKK, said: 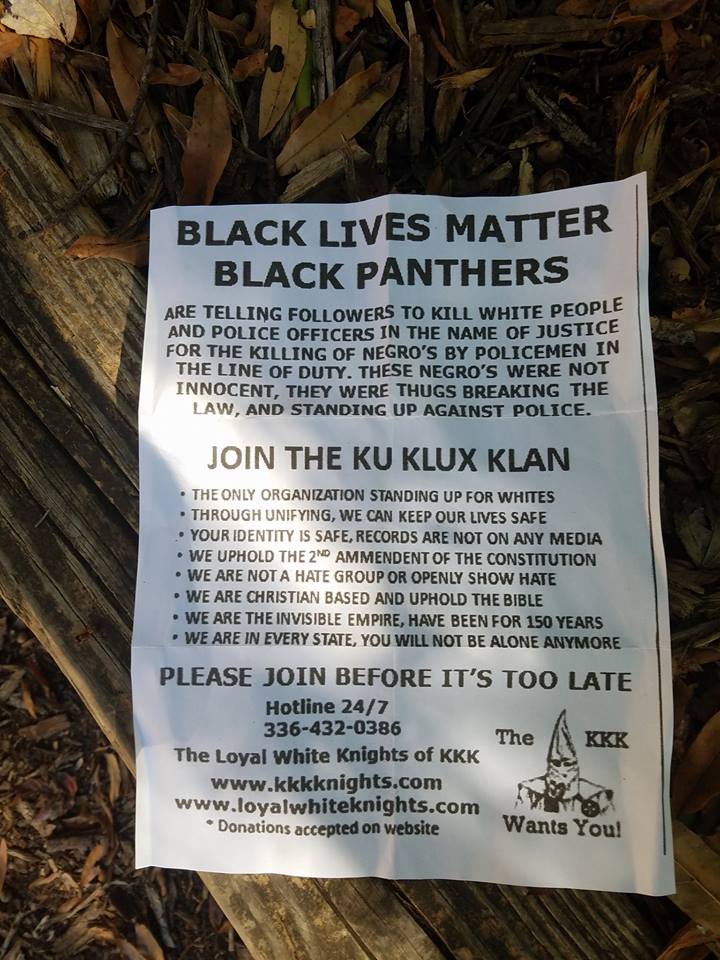 An email to all students from Inside Clemson said:

“On three separate occasions this past week, Clemson students were subjected to racial slurs and other inappropriate conduct while walking on our campus. Due to two of the incidents being reported immediately, Clemson University Police Department (CUPD) officers were able to stop and identify the individuals responsible for this conduct.

“Those individuals are not affiliated with Clemson University. In coordination with the Thirteenth Judicial Circuit Solicitor’s Office, the appropriate action was taken to deter these individuals from repeating conduct of this nature on our campus. We take such racially motivated remarks and/or acts toward our students extremely seriously, and such conduct directed at anyone in our community runs counter to Clemson’s values.

“Additionally, last Friday night, several clear zip lock sandwich bags containing KKK recruitment flyers weighted by small gravel, rice, or dried beans were placed at various roadways and parking lots on our campus. These appear to have been dropped from a moving vehicle. This was not an isolated event on our campus as this type of activity was also reported on that same night in other parts of Oconee County.

“We are in contact with local, state and federal law enforcement partners concerning this matter and it remains an ongoing investigation. CUPD has increased our patrols of campus areas that are heavily used by students and will remain vigilant in our efforts to keep Clemson a safe and secure learning environment.”

“The KKK recruitment flyers that were placed on this campus made me feel imminent fear. I can not say that I feel safe walking around Clemson University nor am I able to focus on my academics.

“It is extremely difficult to hear that our administration and CUPD have decided the only course of action is to increase patrols around what they say are areas heavily used by students, in tandem with keeping an ongoing investigation…this is a long term response to an issue that could/should be prevented in the first place.

“The KKK is a terrorist organization and it is my opinion that their presence is a threat. As of right now there have been no efforts made to comfort students that may fear for their safety, especially with Clemson’s less than favorable political climate regarding issues involving race.”