Almost 7,000 people have signed a petition to keep all student tickets free

Starting this fall, Clemson students may have to pay $225 for lower deck football tickets

For decades, the student section in Death Valley has been one of the best in the nation, in large part due to students getting free entry to the games. Free tickets are awarded on a first-come, first-served basis to IPTAY members, seniors, juniors and so on. The existing system allows most, if not all, seniors to sit in the lower deck for the stadium each game.

But this may change in fall 2016. For the first time ever, the Clemson Athletic Department is considering charging each student $225 for lower deck tickets. In response, a petition (with almost 7,000 signatures and counting) to keep Clemson Football tickets free for all students has been making its rounds online. 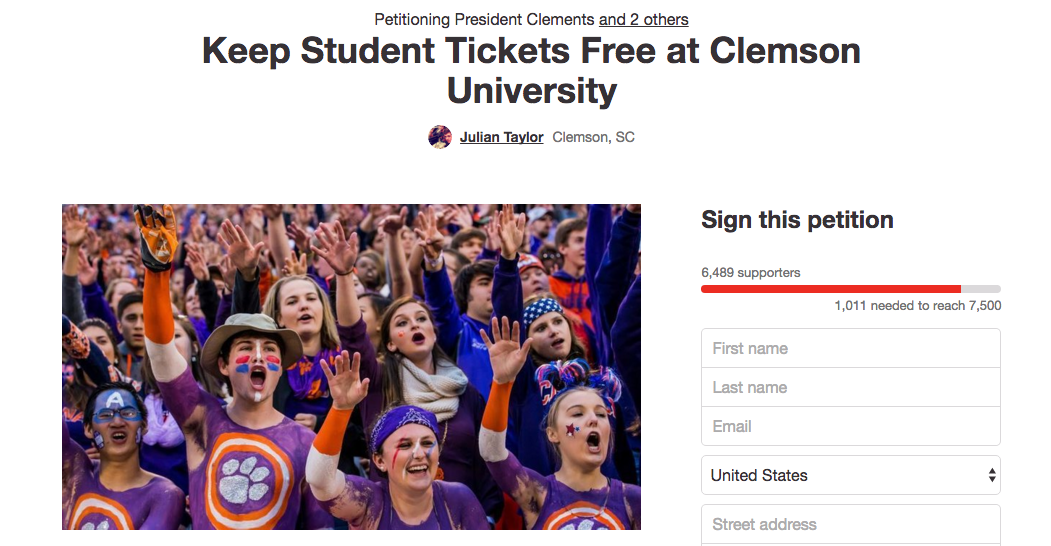 Clemson student Julian Taylor created the petition – addressed to President Clements, Athletic Director Dan Radakovich and the Clemson University Board of Trustees – less than 24 hours ago.

It reads: “Starting this coming football season (Fall 2016), the Clemson University Athletic Department and Athletic Director Dan Radakovich plan to start charging students $225 a year if they wish to sit in the lower deck.

“But the good news is, this plan is not set in stone; please sign this petition and share it on social media with the hashtag #CUwontpayit, so we can make it clear to the Board of Trustees, President Clements, and the Athletic Department that Clemson students cannot afford to be charged for student tickets!”

Your heart is in the wrong place .@ClemsonDRad and your hands are in pockets that have little to begin with. #CUWontPayIt

@ClemsonDRad As an alumnus, I think your transparent attempt to exploit the student body is embarrassing to our university. #CUWontPayIt

The petition then lists the reasons why students shouldn’t have to pay for tickets, including stats on how much of student fees is transferred to the athletic department each year.

Julian concludes by saying: “Last year we won the ACC Championship and the Orange Bowl without charging for tickets or implementing an athletic fee, AKA the Athletic Department doesn’t need the money, they just see student as an untapped revenue source.”

In a Facebook note posted Tuesday morning, the athletic department has responded to the widely-supported petition to explain the potential ticket up-charge and refute some of the claims mentioned in the petition.

“The athletic department does not receive money from tuition or fees. The $106 referenced is a fee for Campus Recreation, which goes to intramurals, Fike and other student affairs operations. This plan would effect only those who wish to attend football games in the lower level. It is not a new imposed fee, nor is it in any way mandatory.”

“Clemson is the only school in either the Atlantic Coast Conference, Big 12 or the Southeastern Conference to not have a student fee or charge for football season tickets.”

I can’t blame the school for looking to generate more revenue. They understand there are students who are willing to pay for these lower deck tickets, so they’ve taken advantage of this market.

But this news doesn’t come at a great time – Clemson is currently building a $55 million football complex that comes with amenities such as laser tag, sand volley courts, a 24-seat movie theater, bowling alley and more. If the athletic department truly needs almost $2 million in revenue, why are they spending so much on the amenities in the new football complex?

This is a football school, but students are starting to feel less like students and more like cash cows for the university. While BYOG (Bring Your Own Guts) has been the motto for Clemson football players, the new motto for students will be BYOW – Bring Your Own Wallet.