In light of recent events, this dinner is now more significant than ever

February 17, In MacDonald Commons, Bucknell’s Jewish and Muslim communities got together for the traditional Jewish Friday night services, welcoming the sabbath. The event was hosted by Hillel, the on-campus Jewish organization. Never before has Bucknell held a solidarity dinner with the two minority religions.

About seventy people attended, and although the event was primarily for Jews and Muslims, there were a few members of other faiths there as well. The sabbath services began at 5:30pm, followed by the Muslim Isha, nighttime, prayer. Soon after, the Hillel board said Kiddush, the blessing over the wine, and dinner was served. 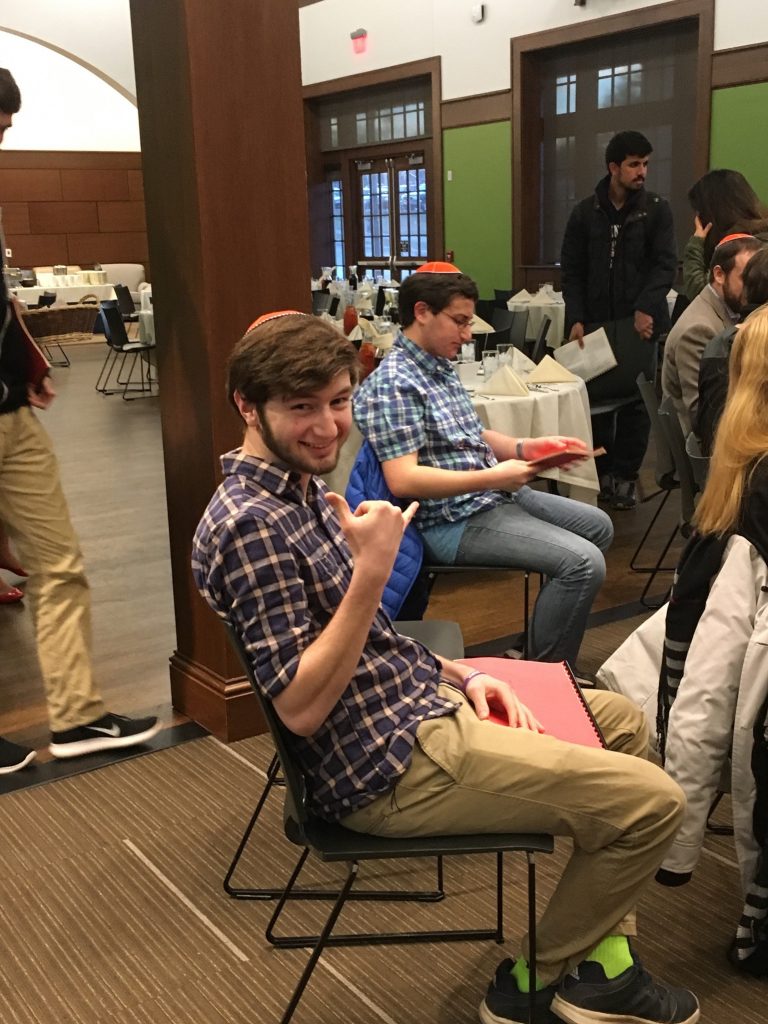 This event has been in the works for over a year, but is now more significant than ever. With the current political climate, minority religions on this campus are being threatened with swastikas and flyers with anti-muslim and white supremacist statements. Through the solidarity dinner, the Jews and Muslims of this campus sat together, prayed together, and ate together.

Although this event was intended to make a social statement, it was not intended to be political. However, in America today, it’s hard to keep politics out of our lives and conversations and not attach a meaning to dinners like this.

In the words of Omar El-Etr, 19, Computer Science major and a Muslim student at Bucknell and member of the MSA, Muslim Students Association:

“I try my best to run away from politics, but it keeps chasing me. Everyday, everything new changes. It’s totally unexpected politics. I’m trying my best to get it out of daily life, but it’s been very hard in the recent events and what’s happened.” 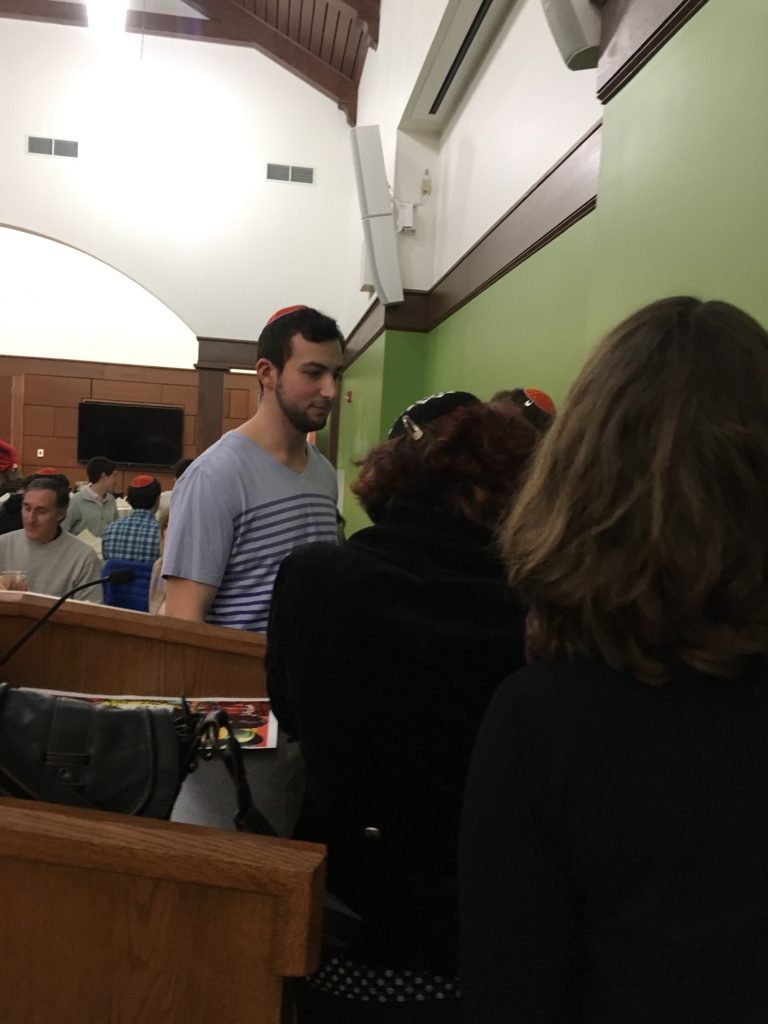 The Hillel board saying the blessing over the wine

With regards to a shift in student hate speech and prejudice since last year, Omar noted, “I have no idea where the hate that people have came from. From what I’ve seen last year to what I’ve seen this year, there’s been a change here and it’s unfortunately to the negative. I think people need to get more educated about both religions, to understand where we actually come from.”

Kabir Uddin, 19, Accounting and Financial Management major, president of the Muslim Student Association and one of the leaders of the Interfaith Council, said:

“It’s not like an overt change, or a tangible kind of change. Besides what Omar noted about the anti-Islamic flyers or the white supremacist flyers. Besides that, I think it’s more on a micro-level in some sense like in people’s perspective and points of view on religion in general or just on the Muslim religion or on Judaism I think those viewpoints manifest itself a little more like in the classroom. I think an ideological shift is very apparent after this political stuff.” 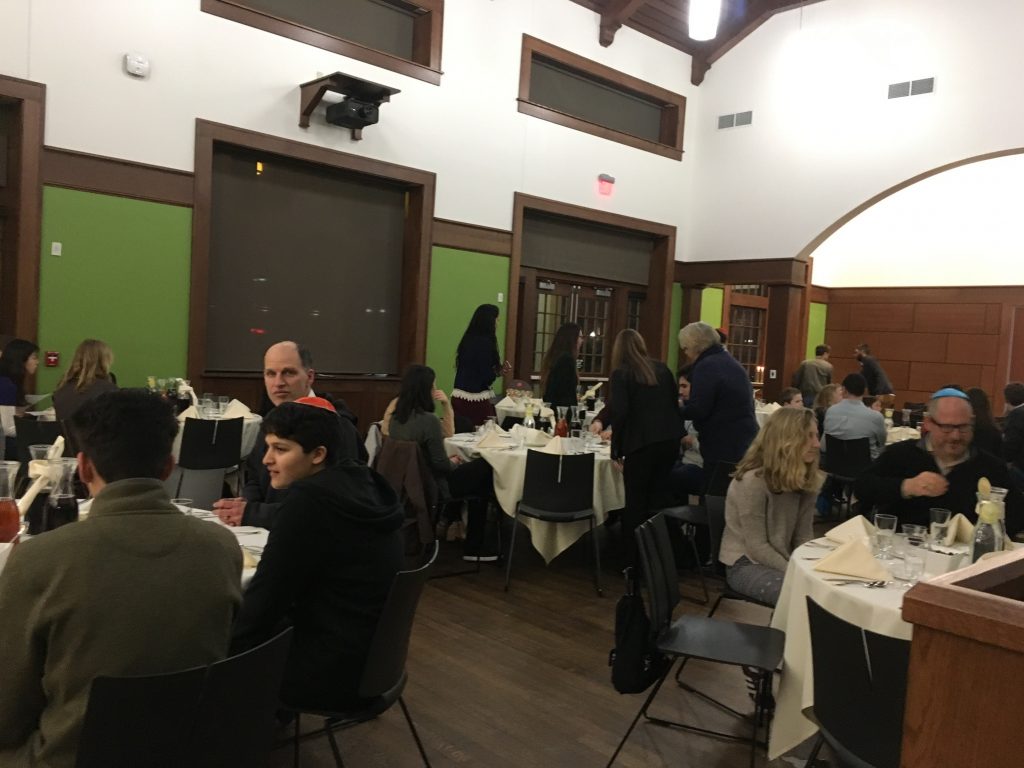 At the start of dinner

During dinner, the attendees talked while eating a traditional Friday night sabbath chicken dinner. There were no activities scheduled or pre-planned discussion topics.

Rabbi Chana Leslie, the Chaplain for the Jewish community, clarified what she believes is important about the dinner:

“A big part of what we’re doing tonight is about that” referring to one of Omar’s previous comments about bridging gaps between religions. “It’s about relationships, it’s about being able to ask questions. It’s just gonna be allowing people to get to know each other.”

This dinner was the first solidarity dinner, but it might not be the last. Throughout the event there was talk of another night like this hosted by the MSA. Hopefully people learned a little more about each other’s religions and hopefully in the future they will learn more.