On October 4th, approximately 630 Bucknell students and staff gathered on the Malesardi Quad as a part of the 18th annual solidarity march for students who have been silenced or marginalized.

The march was organized by the Social Justice Residential College at Bucknell and Bucknell Student Government in collaboration with Lewisburg’s Community Zone and Community Alliance for Respect & Equality (CARE).

Attendees marched in silence from the quad and down 7th and 6th streets to Hufnagle Park in downtown Lewisburg, where Bucknell students preformed poetry readings, dances, and songs. 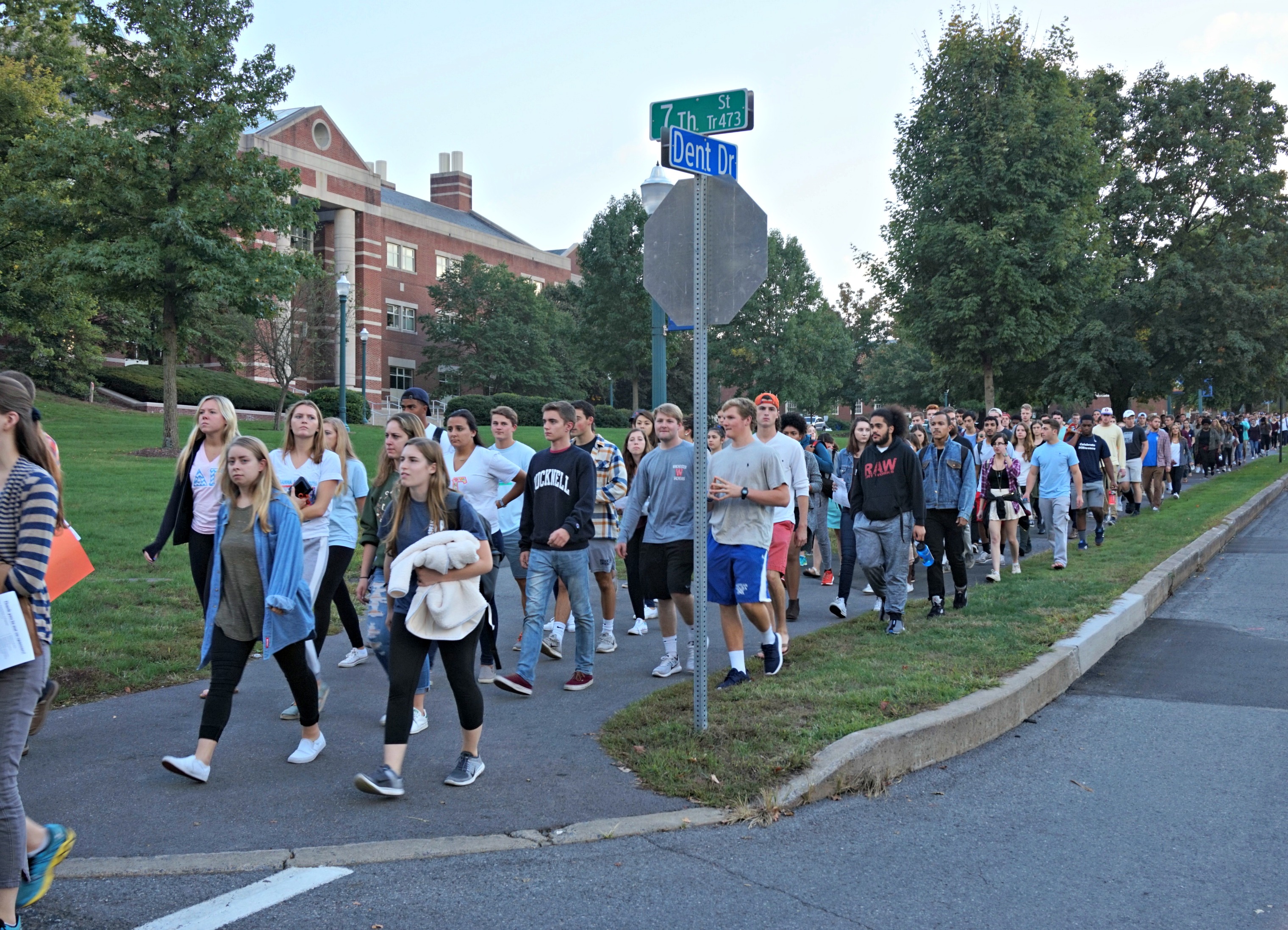 The tradition of the march first began in 1998, with the deaths of Matthew Shepard and James Byrd and has since evolved to respond to current social justice issues. This year, the opening remarks at Hufnagle park were given by Cynthia Peltier, a Lewisburg Community Zone & CARE representative.

Peltier spoke to the march’s current purposes, saying: “[since the deaths of Shepard and Byrd], violence in the world against each other has only escalated…We are told that the causes for such violence are complex, but that cannot be an excuse for our inaction…These tragedies must end.” 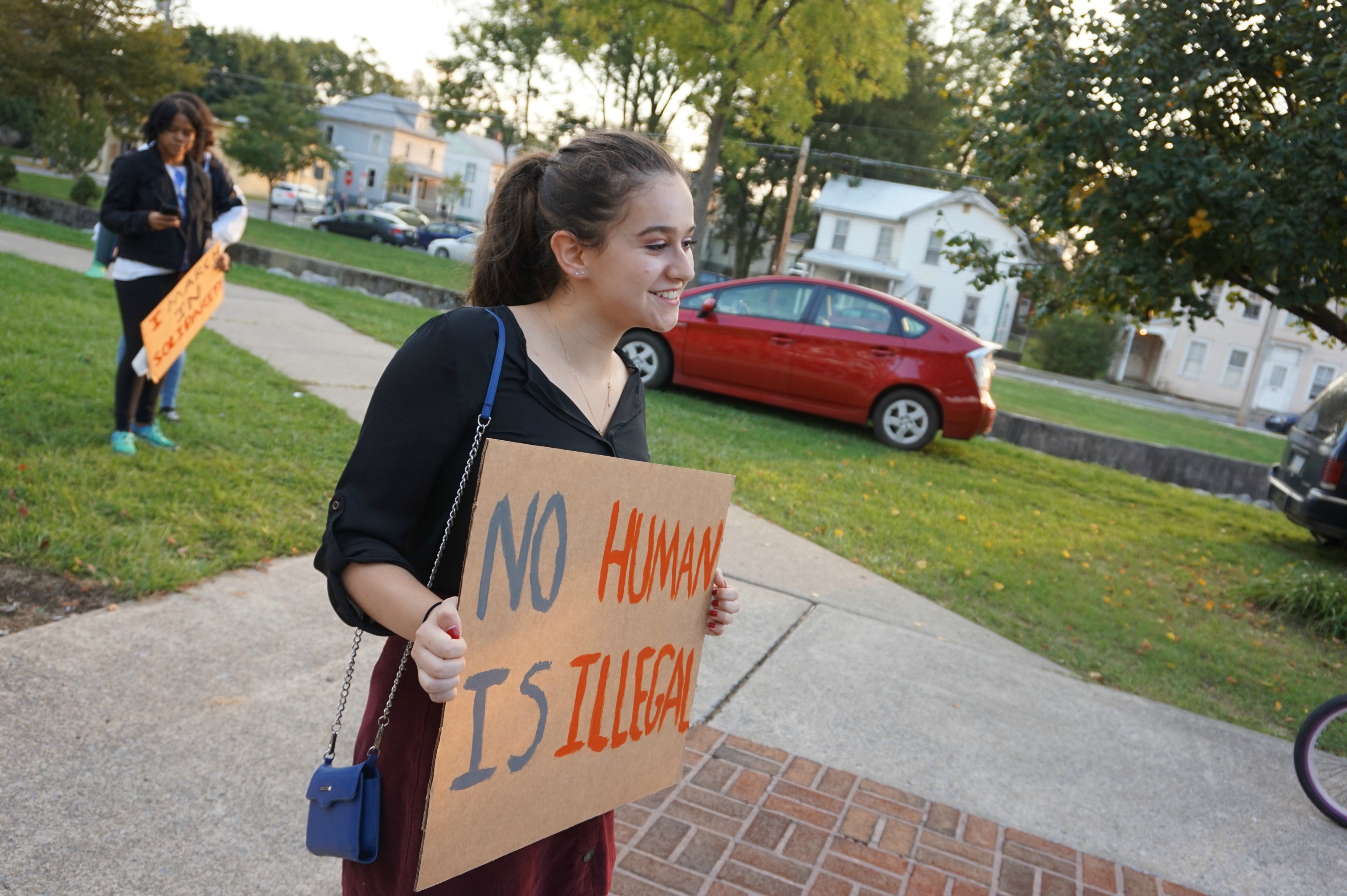 Many student performers, too, expressed their discontent for how race relations are handled both in the U.S. and on Bucknell’s campus. Maddie Galvez, a Bucknell student, addressed all attendees in a powerful poetry reading, including the poignant line:

“I’m mad we still have to hold marches about this shit.” 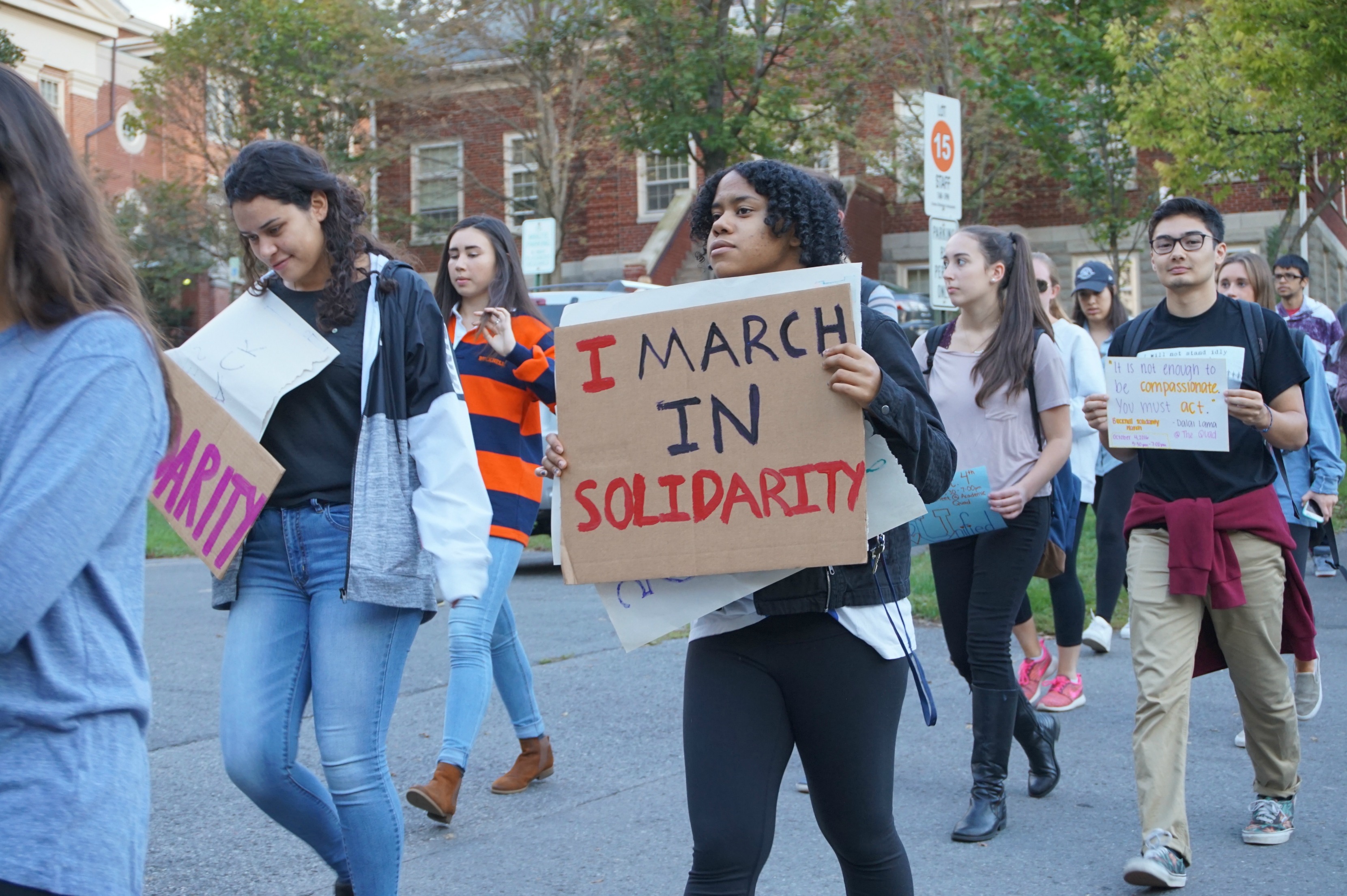 Jackson Pierce, another Bucknell student speaking at the event, said, in arguably the most memorable poetry reading of the evening:

“Last year we were so eager to stop the hate

but how much has actually changed past that date?

We had a few forums, hired some new admins,

and we looking at Bravman like now what happens?

Good manners are not enough of an answer…

Two hundred years might seem far back but I promise you the wound still stings.

Especially when we still have Michael Browns and Rodney Kings.

You can’t kick back, press play, and live stream the revolution.

What we need is a cultural electrocution.

A stark reminder that even though you might think look and act different,

We are all still human. 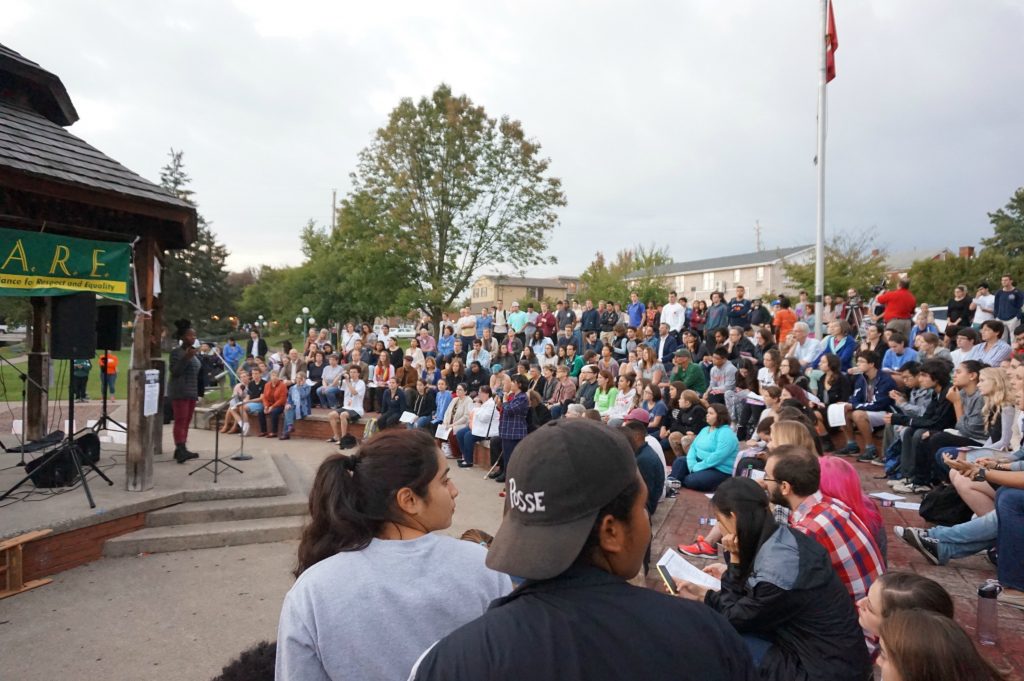 Ella Tazuana Johnson, 21, Linguistics & Arabic Studies, another student performer spoke to what solidarity at Bucknell meant to her.

“Solidarity at Bucknell means to coming together as one, uniting to stand against injustice on different groups that aren’t representative of the majority, and standing up for what you believe in, as well. I think solidarity means, if you don’t necessarily agree with someone else, you should still be understanding and be more empathetic towards other people’s beliefs and ideologies.”

We asked the same question to Favour Unigwe, 18, International Relations & Economics, a Bucknell student attending the event, who said:

“I believe that solidarity at Bucknell is basically all of us recognizing the privilege that each of us has, acknowledging the struggles that our fellow Bucknellians experience due to the systems of oppression that exist in America and at Bucknell, and then taking steps to show that we care and are working to dismantle those systems.” 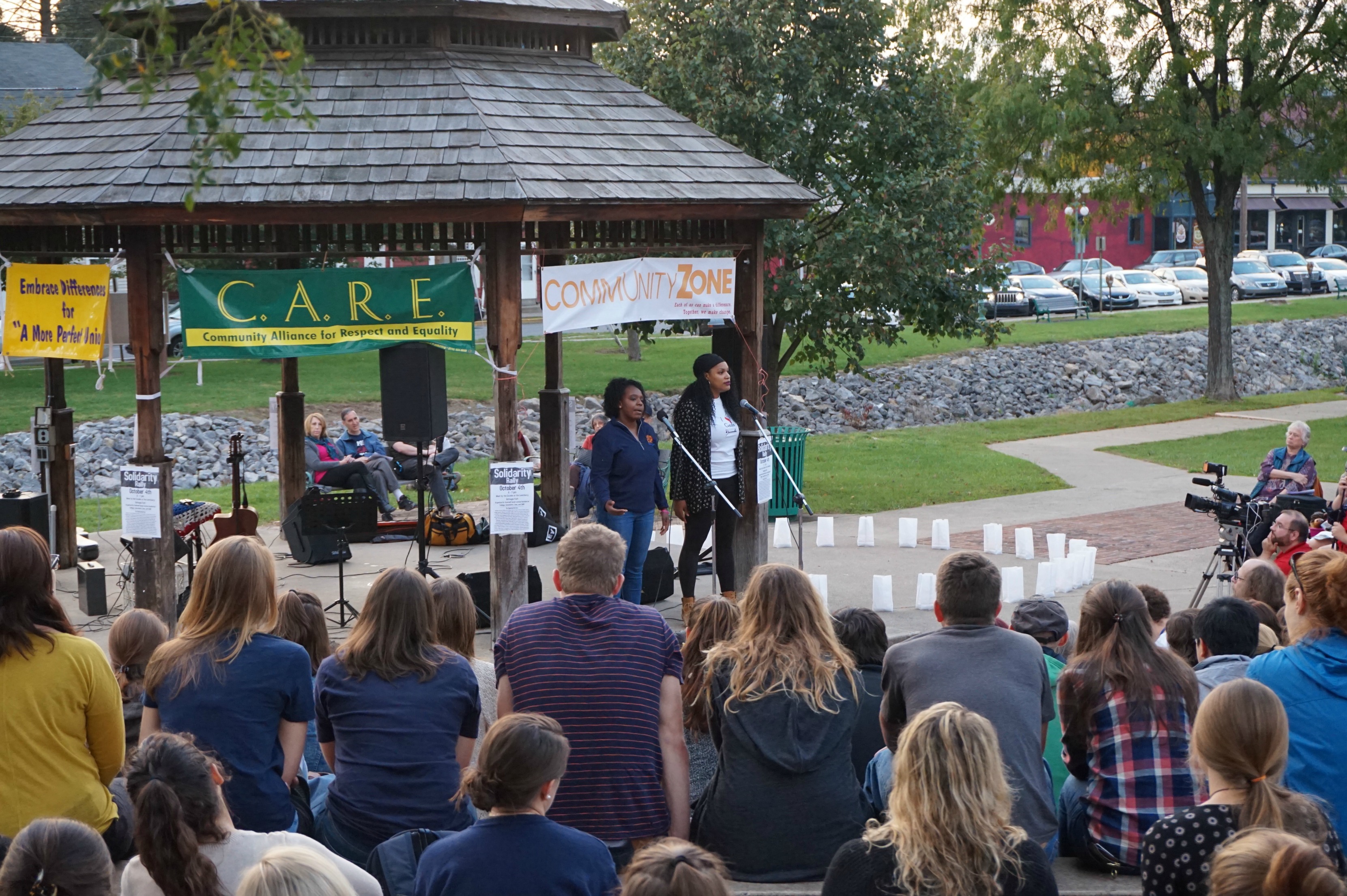 While the event went off fabulously, the feeling on campus still seems to be that we need to do more in the Bucknell community to address issues of race, LGBTQ representation, and other marginalization. It seems marches aren’t enough, and it’s time Bucknell makes some real, tangible change.