EXCLUSIVE: These guys didn’t find a fraternity they wanted to join at BU, so they started their own

“I was really nervous about joining a fraternity… Starting one would allow me to create my own rules,” said Vice President of Phi Kappa Tau’s Boston Colony.

A rising senior from Montauk, Benjamin Newbery, currently studies Mechanical Engineering at BU, and on the side? He's president of an upcoming chapter of the fraternity Phi Kappa Tau – or perhaps it's better to say he studies ENG on the side.

Bringing a chapter of any fraternity to a new school, let alone the entire Northeast region, is not easy work. The Tab spoke with Newbery, alongside the other Founding Brothers of the Phi Kappa Tau Boston Colony, on how they got started. 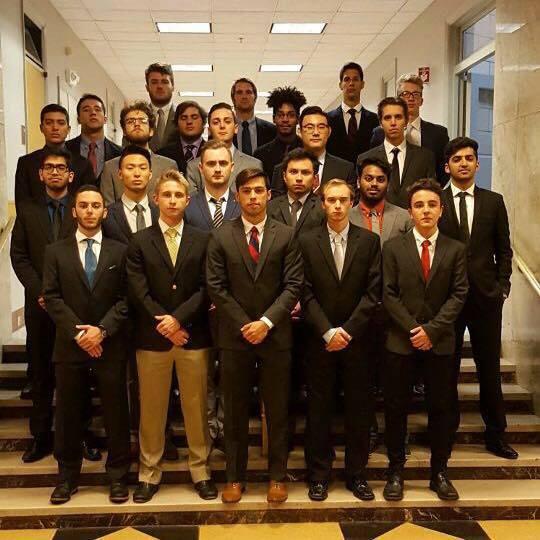 A bathroom conversation starts a vision

According to the first edition newsletter, the story began when Newbery met the current Vice President of the colony Michael Goodkind, in December of 2015. They discovered they both "shared a vision of changing the current landscape of Greek life at BU" during a conversation in the bathroom of the sorority Gamma Phi Beta's formal.

Goodkind said it had been his dream to start Phi Kappa Tau at a university he attended, ever since a high school trip to visit his brother at Franklin and Marshall college. His brother had been a part of PKT and Goodkind "loved their sense of brotherhood."

During his sophomore year, as Goodkind "struggled to have a really tight knit friend group," him and Newbery reached out to Phi Kappa Tau and expressed their interest in starting a chapter in Boston.

"To be completely honest, I've never been a really big Greek life person," said Goodkind. "I was really nervous about joining a fraternity and going through all of the traditional things that those organizations are about. Starting one would allow me to create my own rules. I could start my own legacy." 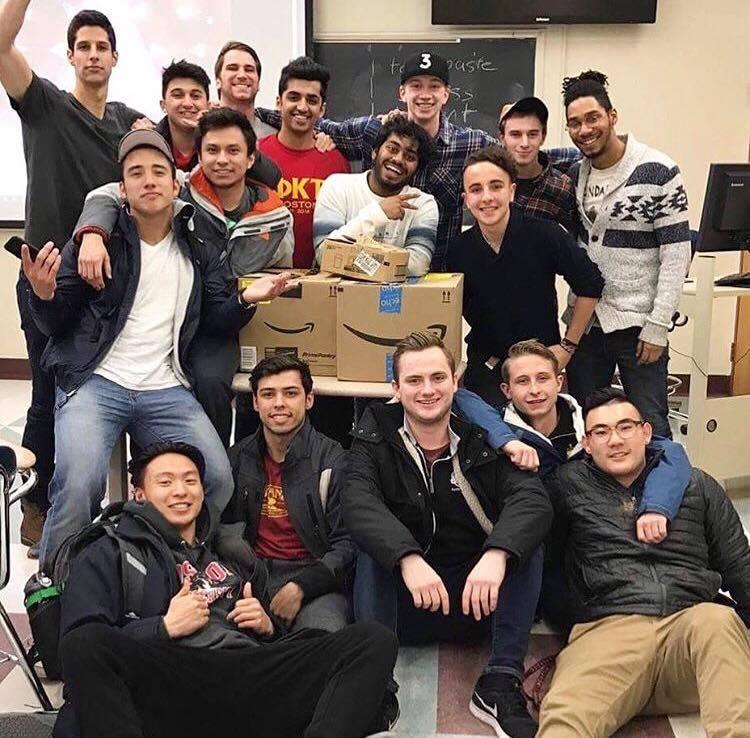 “When we began the fall semester of 2016, we were a modest but committed 14 members," said Newbery in the fraternity's first newsletter on July 4th, 2017.

During the spring of 2016, as Newbery studied abroad in Germany, Goodkind took over leadership and recruited a team of brothers to help start the chapter, including an E-board.

Anyone wanting to join a new group on campus that wasn't affiliated with any national fraternity and didn't have a house, came as "a complete shock" to Goodkind. But after creating a Facebook group, "people from all over who were generally tired of the usual Greek life scene and reputation" began to join.

Secretary Vinamre Kasanaa, listed other ways the boys gathered interest in PKT, including handing out business cards with slogans that read 'Creativity. Diversity. Brotherhood,' or just standing outside colleges like CFA and COM to chat with creative people.

"Ultimately, the reason for the wonderful diversity and creativity in our fraternity is that we all understand social dynamics very well and go out of our way to ensure that there are no cliques or that no silly stereotypes are being adhered to," said Kasanaa.

Trouble in the hierarchy

The journey to becoming a colony consisted of many bumps in the road, significantly was the fall-out of the original E-Board President Newbery and VP Goodkind had formed.

"Starting something like this… from absolute scratch, takes a lot of time," said Newbery. "It's a lot of recruiting…you're trying to sell something to someone that you're not entirely sure is going to succeed. But more importantly, it was selling ourselves to Phi Kappa Tau.

There's nothing someone hates more than putting a lot of time into something that has a pretty high rate of failure. I think some members of the previous E-Board were discouraged that there wasn't a concrete timeline about when things would happen."

A new E-board was formed shortly after and their efforts were recognized on November 6th 2016, when they became an official colony of Phi Kappa Tau. Soon they were attending alumni events, welcoming the members of the beta class, and holding their first philanthropy event: "a benefit concert for SeriousFun Network and Planned Parenthood."

Welcoming a new class of pledges 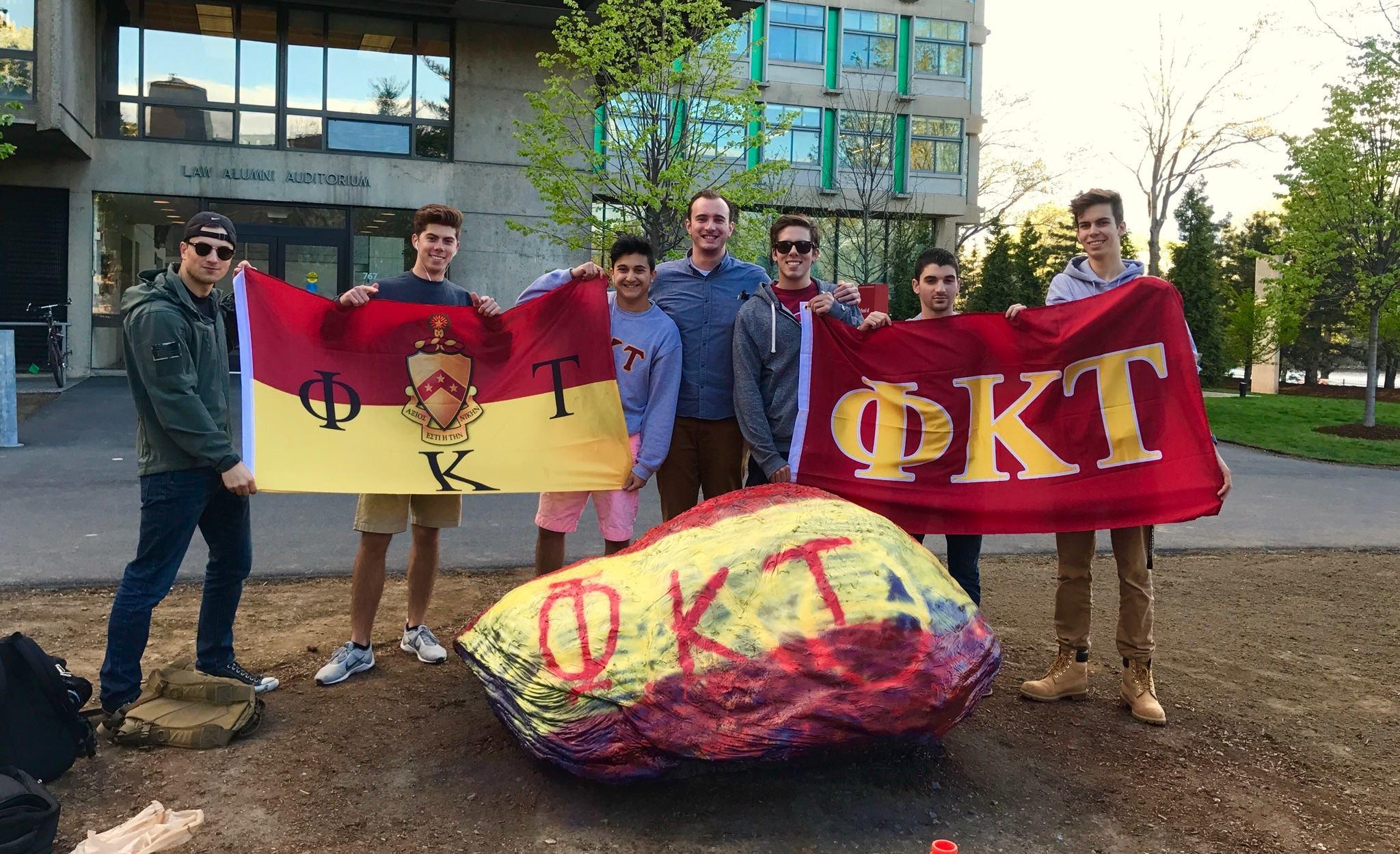 A member of the recently initiated beta class, Adam Lazarchik, was recruited during an informal rush season. Initially, Lazarchik said he wanted to avoid the stigma around fraternities, however, soon began to "crave a new life experience shortly after the rush window had closed."

After running into a brother of PKT, Lazarchik was recruited to a rush event where he and the brothers played basketball and spent an evening at Sunset Cantina. "Since then, PKT has been more than a brotherhood," said Lazarchik. "I've found opportunities to express my creativity, optimism, and skills that that weren't available anywhere else in my college experience. PKT truly enhanced my day-to-day experience while fostering growth towards my ideal self."

Another new member, John Mulligan, was approached by Goodkind at the gym and went through the formal rush period. But he too was hesitant to join at first.

"Freshman year my grades were pretty bad and I thought joining a fraternity they would go down even more due to all the time I thought I'd spend rushing," said Mulligan. "Eventually they convinced me to give it a try and this last semester I got the highest GPA I've received yet so I guess it all worked out.

According Martin Conrad PKT's Scholarship Chair, Mulligan is right as the "fraternity obtained a 3.15 GPA average, which is 15% higher than the campus average." 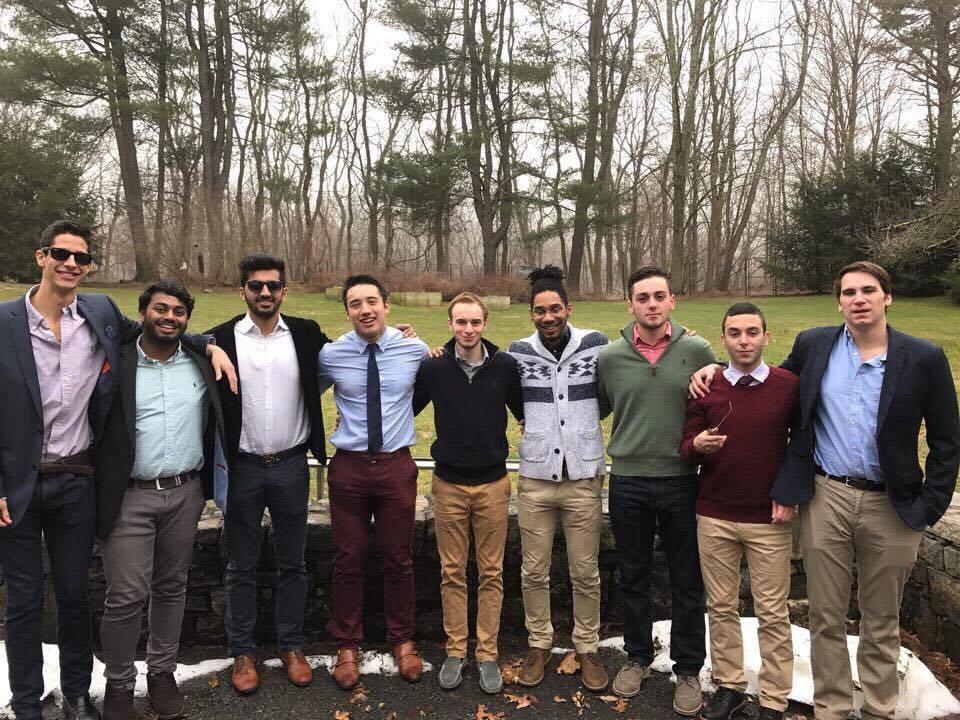 In order to become BU affiliated, Pranav Ramineni, Vice President of Alumni Relations, said the colony is in work with the IFC and the University's Student Activities Office.

According to Ramineni, the national network of PKT set the boys up with very eager alumni which have given them "a lot of advice on recruitment, how to complete certain chartering metrics, and how to be men of distinction."

"What made Phi Tau so special to us was that it was ours," said Ramineni on the long winded process of building their Boston Colony from the ground. "We found a place that our own individual ideas could come together to create something new, without stifling anyone. We step out of our comfort zone to try something new."