Nicholas Fuentes on his time at BU: ‘I lived rent free in the minds of the phony people who derided me most’

His thoughts on Charlottesville, Boston University, and the ‘Alt-Left’

Nicholas Fuentes, the now-infamous BU Trump kid, will not be returning to Boston University this coming year. Instead, he will continue college in the South, surrounded by what he describes as “wholesome people".

We talked to Fuentes about his transfer and his recent trip to Charlottesville, where he participated in part of the Unite the Right rally.

What factors led to your decision to transfer?

As much as some of my more vocal “fans” will delight in believing that I transferred out because of my infamy on campus, in actuality there were a variety of reasons I chose to depart BU. For starters, most of the classes I took at CAS were unchallenging and uninteresting. As the year went on however, it became clear that quite a few ideas of mine were so uncomfortable that they couldn’t be shared.

Other simple things such as the oppressive, brutalistic architecture of the campus, the dilapidated library, rampant degeneracy, outrageous cost of living, and the 10 month abominable winter just made it a poor fit for someone like myself. On top of all that, it became clear as the year went on that I was no longer physically safe on campus due to my political activism.

When you say it was physically unsafe for you on campus, were there other instances of physical attacks or threats?

There were many more instances of threats against my life or physical safety, and in fact I just got a fresh batch this weekend following the anti-white crackdown in Charlottesville — but beyond this, there just existed an environment of open hostility towards myself and fellow conservatives. Perhaps this sounds paranoid but I could always feel a set of glaring eyes no matter where I was, I could always sense a tension of people waiting for me to go out of earshot, always catch a snicker or a dirty look. When I wore my MAGA hat, it was as though you could cut the contempt in the air with a knife. While it never got me down, as I get a kick out of that, at a certain point it becomes a hazard to my health to walk around as public enemy number one. 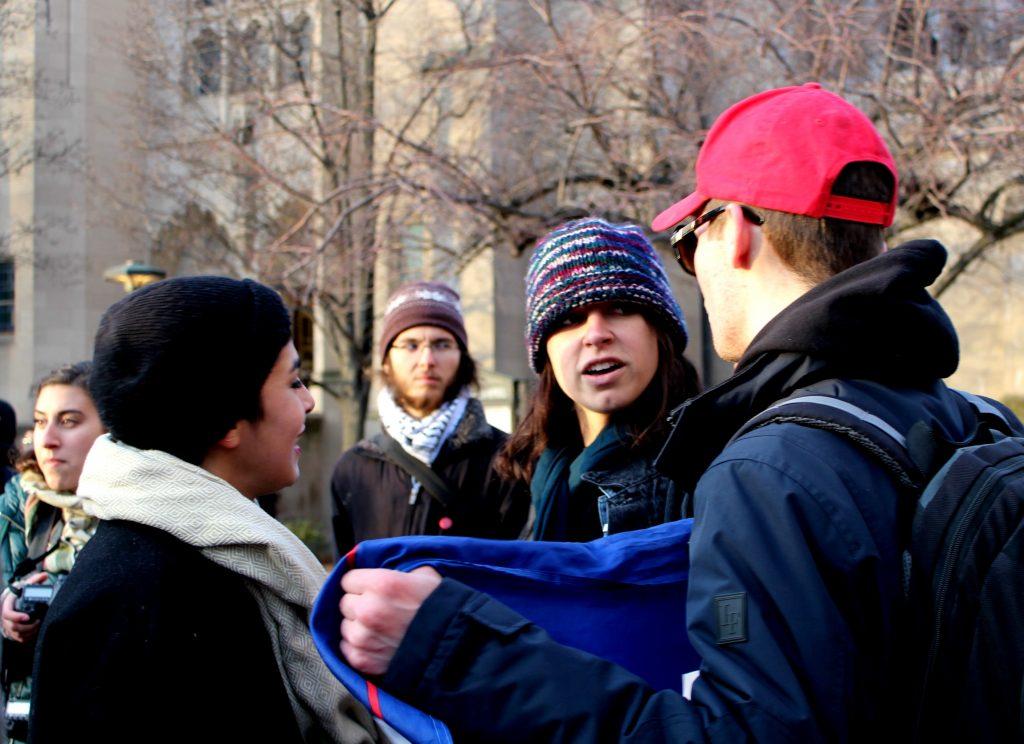 Fuentes at the January 30 anti-Islamophobia rally, where two girls (pictured) attacked him twice, despite organizers' wishes. Photo by Gabrielle Turi

What helped make your decision to transfer to a southern school?

The weather, the architecture, and the wholesome people!

You say the students at your new school are more wholesome. I'm assuming you're referring to them being more Republican or right leaning, at least?

No, I don’t mean that at all. I’ve actually drifted much further to the Right than most of my Republican classmates during my time at Boston University and would prefer to go to a school where the majority of the student body doesn’t agree with me. That said, Boston is a very liberal city, Boston University a very liberal campus. This postmodern, strain of leftism so prevalent on campus inspires a really degenerate and vulgar spirit of hedonism, particularly in young people, which I just found to be viscerally upsetting. The South takes a lot of abuse from the East Coast elite — but I believe that there really is something special and wholesome about their way of life.

Do you have any regrets about BU?

My time at Boston University was really something special. In a way, I owe my growing notoriety in the Right Wing movement to the masses of liberals on campus who supported me by coming to my debate and getting my name out there. In truth, I have always enjoyed conflict, I think it’s real and I think it’s interesting. I knew full well what I was getting into when I first stepped onto Commonwealth Avenue in my Make America Great Again hat; and simply by telling the truth and being myself, I became friends with some of the greatest people I’ve ever met and at the same time I lived rent free in the minds of the phony people who derided me most. I learned a lot about myself, and more importantly I had a great time. 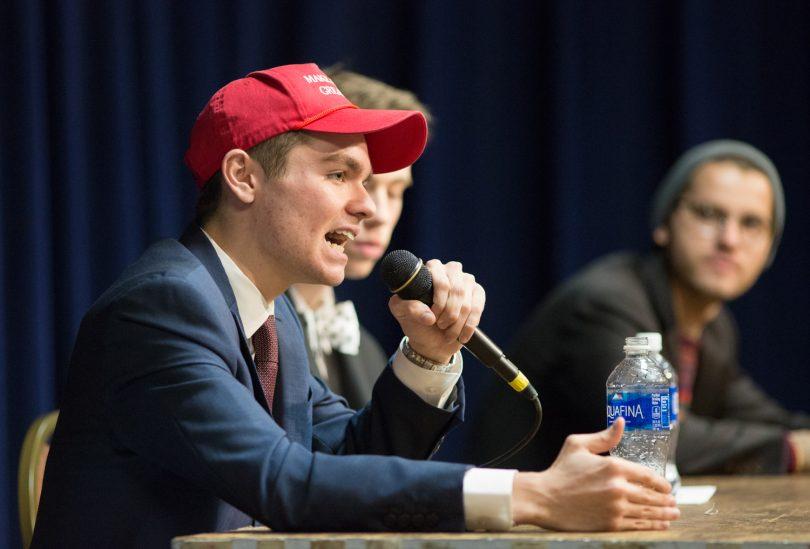 How long were you in Charlottesville?

I was in Charlottesville for less than 24 hours.

What was your reasoning to attend protest?

I understand that the purpose of the protest was to “unite the right” by assembling in person for the first time rather than online. I thought it was an important moment for this segment of the Right Wing, which is far more concerned with culture and heritage than tax policy, to come together in a show of solidarity for our cause.

In one of your Facebook posts you said you “took mace, pepper spray, feces." Did you get hit with any of that or end up in any fights?

If you read the post, I actually said “we” took all of those things. And actually by the time I arrived to the protest shortly before it was set to start at noon, it had already been dispersed by the police, so fortunately I avoided the worst of it on our end. My friend, Baked Alaska, however, was not so lucky. He was targeted by a member of the Alt-Left, who sprayed hydrochloric acid into his eyes at point blank range, and he may permanently lose his vision as a result.

Were you one of the people who carried a tiki torch? To follow that, who made the decision that people should carry tiki torches?

I personally was not at the tiki torch rally and I’m not sure whose idea it was to use those as opposed to home made torches or whatever. To be honest, those sorts of demonstrations are a little bit too LARPy for me, and generally I think it’s bad optics for the movement.

What about the rally was productive?

It was productive for paleoconservatives to make our presence known in the country and in the world. Although the mainstream media smeared the rally as a gathering of “white supremacists,” anyone who cares about the truth understands exactly what happened over the weekend. For so long the alt-left pushed around and intimidated the Right Wing and the demonstration at Charlottesville was an answer to that. 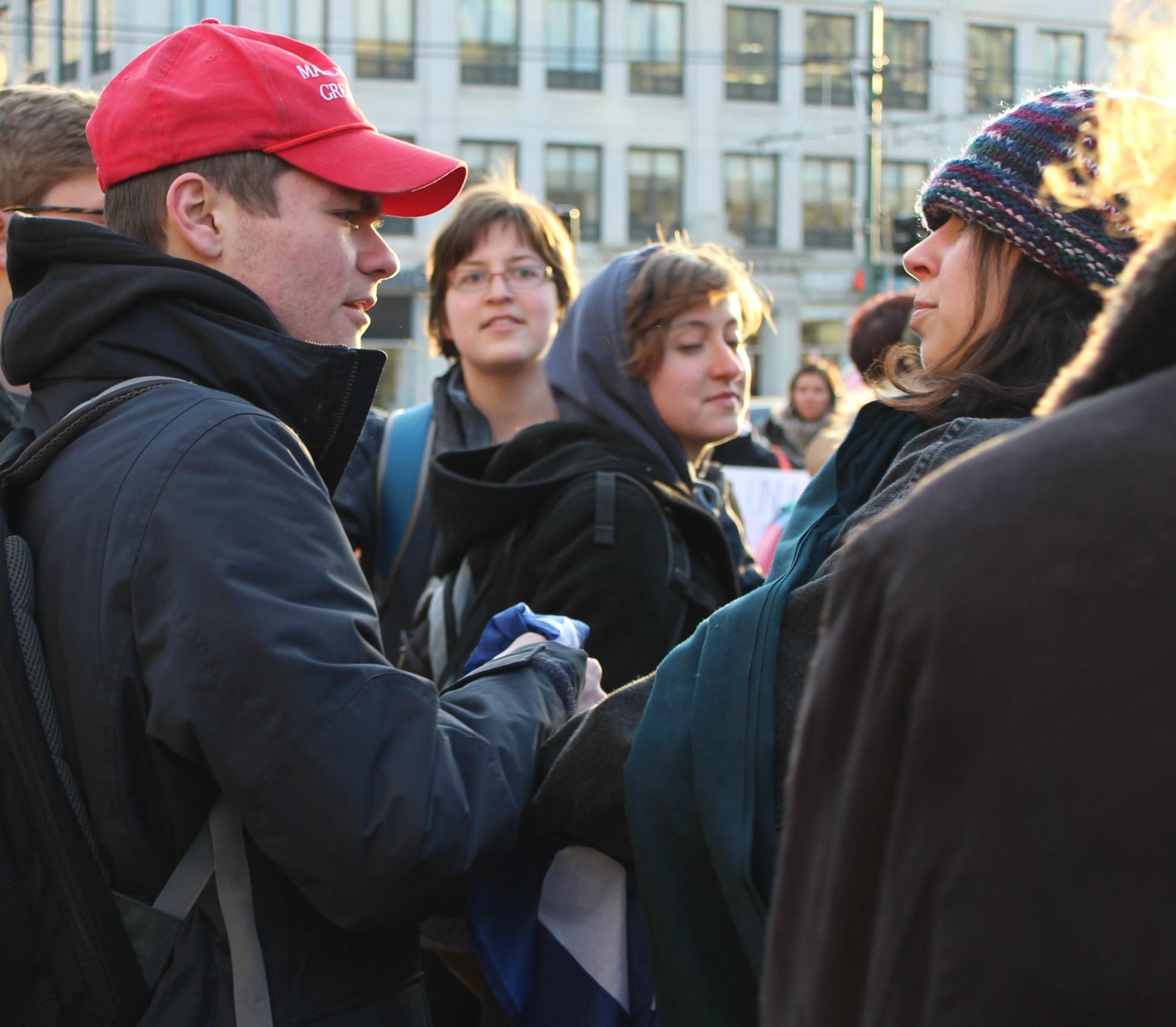 From the January 30th anti-Islamophobia rally. Photo by Gabrielle Turi

I know what kind of reaction people on social media have been having about your being there, but in your own words, how would you describe it?

It was a peaceful protest. The people that showed up for United the Right came to hear speeches. They had a permit, they had a legal and a Constitutional right to be there. Our people came and protested peacefully, yet the government and the alt-left colluded to create an atmosphere of chaos and violence, ultimately in order to stamp out free speech. If you care about the Constitution, if you care about ideas, what happened at Charlottesville was a disgrace, and not for the reasons the MSM espouses. People came to hear speeches and we were crushed by the government and violently attacked by the alt left.

Has anyone approached you in person about the rally, whether because they support your being there or wanted to call you out?

Unsurprisingly, nobody approached me in person about the rally, although I have gotten a number of direct messages on Facebook attacking me for attending the rally.

There was supposed to be (and still may be) another rally in Boston. Are you planning on attending that?

Probably not. At this point, it has become dangerous to express certain opinions in public, and although it may be in vogue to cheer about that and celebrate it, if the normalization of political violence against the alt right continues, everyone will lose. It is popular these days to talk about “punching Nazis;” but mark my words: if the Alt Left continues to brand anybody who opposes the radical transformation of this country by globalist intellectuals as “Nazis,” in short order they will get the Nazis they’re looking for; and nobody wants that.