We spoke to Nicholas Fuentes, BU’s Trump supporter everyone is talking about

‘I’m not a white supremacist’

A video of BU student, Nicholas Fuentes, went viral last week after he showed his support for Donald Trump.

You’ve heard the name, you’ve seen the BU Today video, and you’re probably wondering why this keeps coming up. Fuentes was a part of the YouSpeak “Who I’ll Be Voting For” series that caused an uproar on Facebook and Twitter. With over 25,000 views on YouTube, Fuentes talked about how “romantic,” and, “inspiring,” the “cultural transformation” Trump wants to bring.

The Tab sat down with the self-proclaimed Republican of seven years to offer a chance at explaining his comments on social media this past week.

Why do you favor Trump as a candidate?

At first it was because of the the tactical advantage he would bring to the Republican party, and really to anybody who was trying to affect change outside of the globalist orthodoxy. Additionally, I think specific reforms that he would implement, that I like Trump for, are his America first positions on immigration, on trade and on foreign policy. Non-intervention on foreign policy, strong border control, and extreme vetting, making great trade deals, fighting globalism, fighting the three big Ts: TPP, TISA, and TTIP, and other deals like NAFTA.

On Twitter you’ve all but said you are Hispanic, so how can you still defend Trump after his comments about Hispanic people, like calling Hispanics (specifically Mexicans) rapists and criminals, and with his views on immigration?

25 percent Mexican. I see no contradiction, and this is because I was raised by my parents as an American first, and everything else second. That’s number one. When I see these protestors flying the Mexican flag, and speaking Spanish and cussing out Trump in Spanish, I think to myself, my ancestors left Mexico to become Americans, not to bring Mexico to America, and to make America more like Mexico. Obviously they left Mexico for a reason. So I’ve always seen that as being totally not incompatible with being Hispanic. 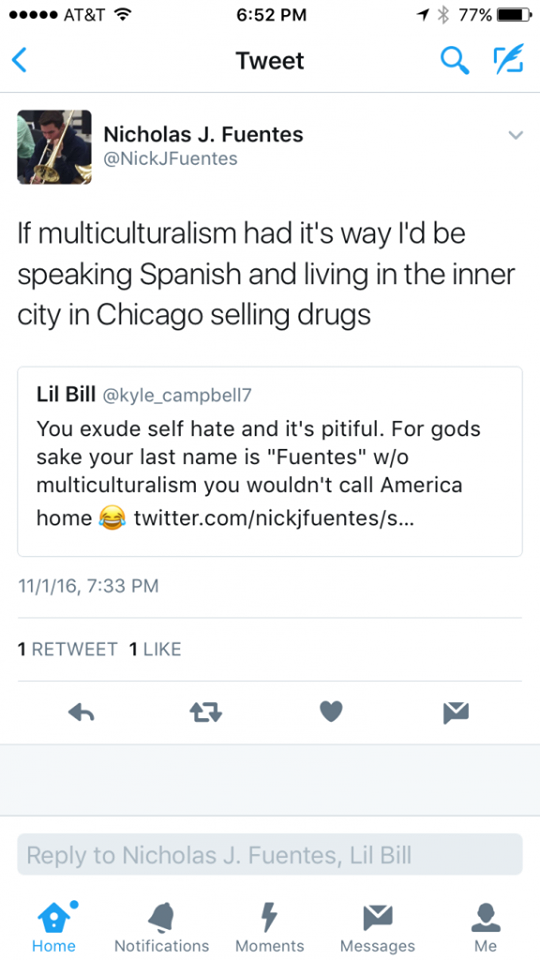 Following up with that, on Twitter you said, “all Hispanics must be Democrats because all Hispanics are the same. Totally un-racist logic,” in response to someone asking why you support Trump, but then you said, “If multiculturalism had it’s way I’d be living in the inner city in Chicago selling drugs.” Is this not racist?

Not at all, no. One, Hispanic is not a race. Specifically Mexican is an ethnicity, and Hispanic is also an ethnicity, so no I don’t think it’s racist just on a technical level. On a more broad level, is it bigotry? No, because multiculturalism has it that all cultures are equal and that no one should be assimilating. When Mexicans come into America, they should be practicing their own culture, their own values. I grew up in Chicago, my father grew up in Chicago, his father grew up in Chicago. To say that the Hispanic community specifically, specifically in the inner city, specifically in Chicago is completely divorced from drugs, I don’t think it’s a racist proposition to say that that’s not true. 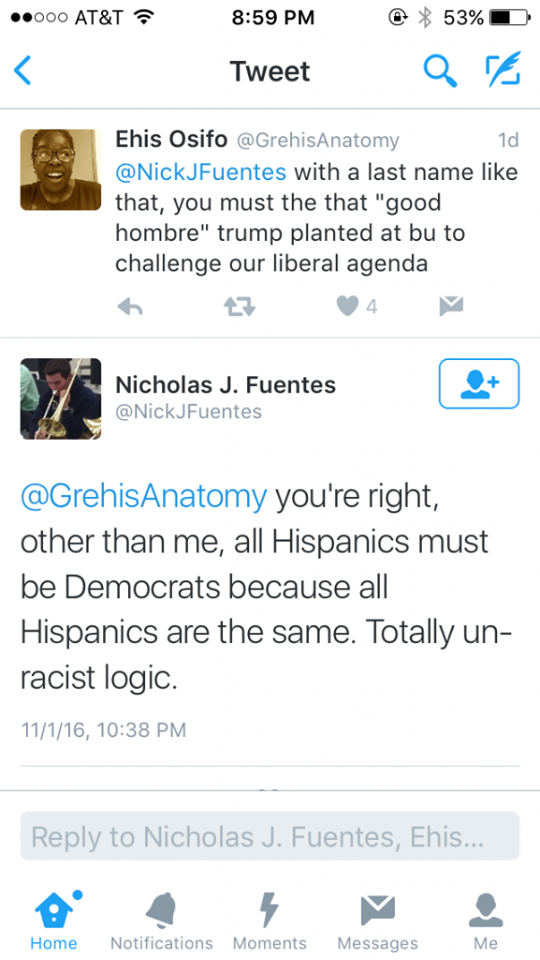 Not at all, no. Like I said in the video, now is not the time for political correctness or politeness. It really goes to the very visceral nature of this election, and Trump’s campaign, which is that we are taking back our country. I know a lot of liberals like to say that’s ‘Make America White Again,’ that’s the white man coming to take his country back from the black president, it’s nothing of the sort. If someone goes off the rails, if someone is too expressive, if someone says something that is not in the politically approved lexicon of what is polite or appropriate, they are given the axe job, they are harassed, they are fired from their jobs.

You made a video with BU Today endorsing Trump, and there’s been a negative backlash since then on both Facebook and Twitter. What do you have to say about the responses you’ve gotten?

It’s unsurprising, but it is disappointing. I always saw this sort of thing on conservative networks, people like Milo, Breitbart, Ben Shapiro, who cover this sort of thing where you go to a liberal campus, you express something that goes against the progressive orthodoxy, and they come down on you like a pack of wolves, the mob descends upon you. If you express something as simple as being against multiculturalism , you are instantly branded as a white supremacist, a self-hating Hispanic, someone that’s a bigot, an Islamophobe, a Homophobe, you hate Hispanics, you’re a Xenophobe, a misogynist- you’re all of the things. 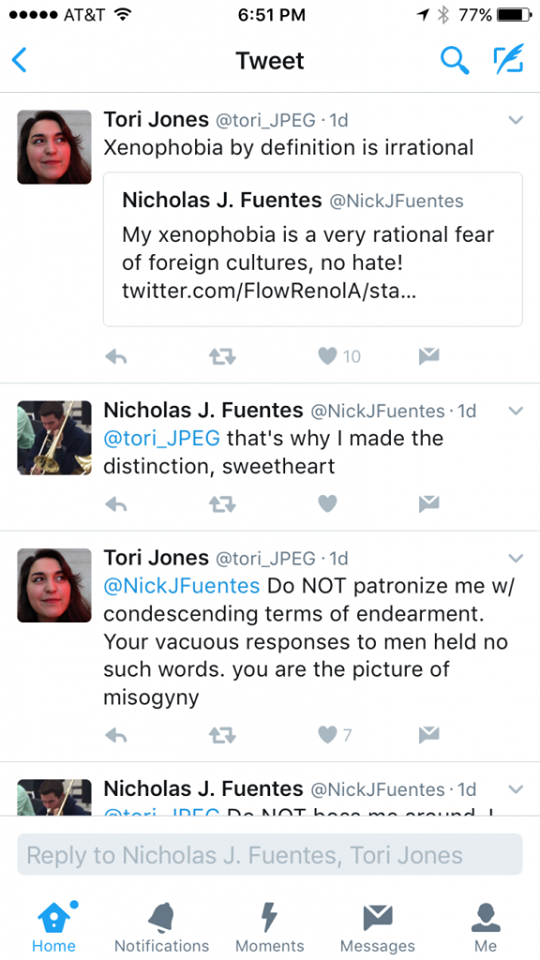 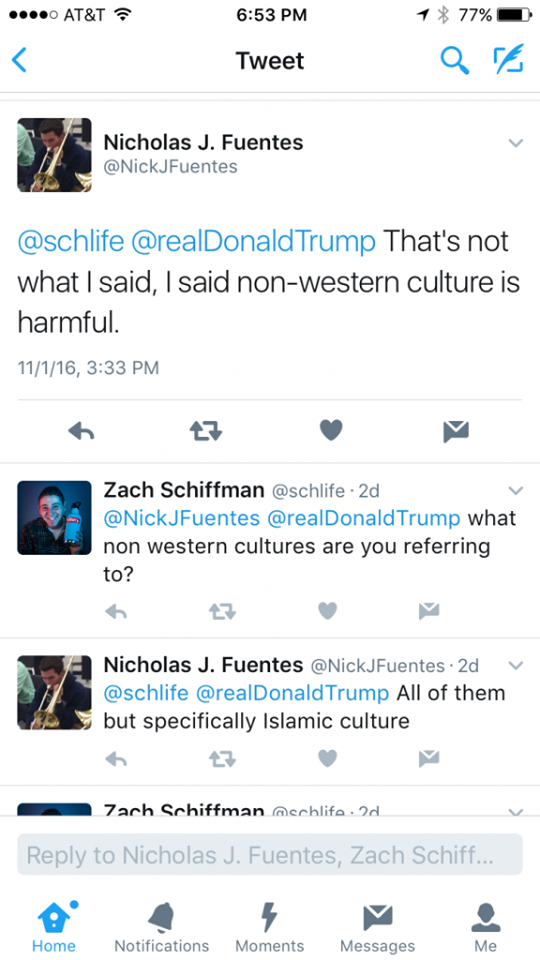 You mentioned on Twitter that “non-western culture is harmful,” specifically Islamic culture. Does this mean you agree with Trump when he says he wants to ban Muslims from entering the country?

Well his view on the Muslim ban has evolved over the course of the election. The Muslim ban was an immediate response to the Paris terror attacks, and admittedly maybe that was a little bit of a reactionary approach, however it was also I don’t think you can view it outside of the perspective of what he was trying to achieve at the time, which was coverage in a 17 person presidential primary, so I think it was important for him to do something outrageous tactically. I think it was more of a political move than it was an ideological move. As he’s moved towards extreme vetting, I’ve started to agree more and more with him. 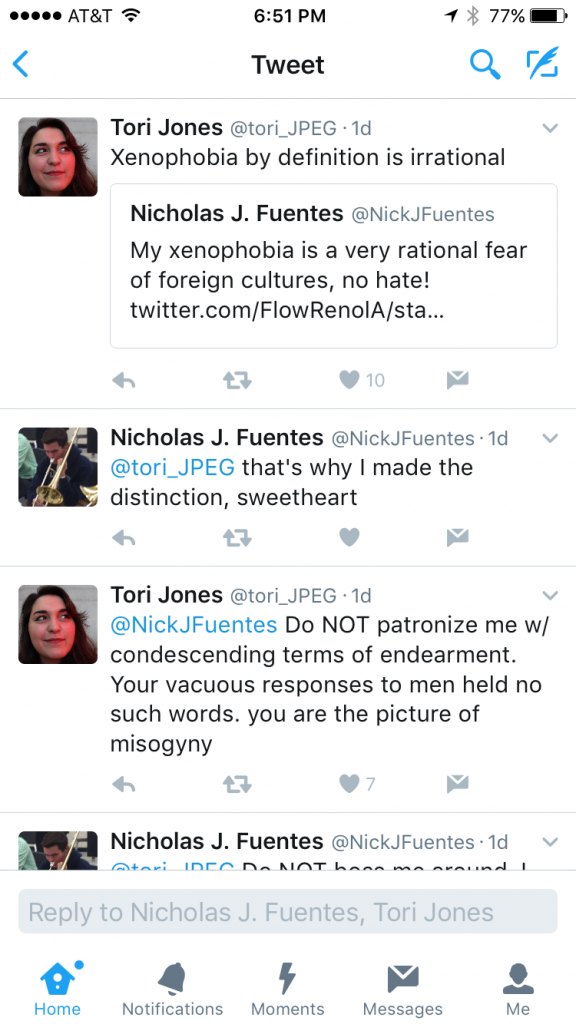 Let’s stay on Twitter, you got into a bit of an argument with a young woman and you were using terms like “sweetheart” and “babe,” what do you have to say about Trump’s similar, and worse even, way of speaking to/about women?

I think it’s a non-issue really. It’s a semantic debate to have, but if we’re going to have it, I would say, problems that face our country are that we are hurdling towards a nuclear confrontation with Russia. That’s a problem. The debt is $20 trillion, and is projected to grow by many more trillion dollars over the next 50 years. You break down all the issues that are plaguing the country, and Trump saying a few things that are a little bit crude or crass towards women, I think is peanuts compared to what we actually should be talking about.

Do you have anything to say about Trump’s alleged sexual assaults, and when he said, “grab them by the p***y?”

Every accusation of sexual assault has been disproven. Every single one was politically motivated. This is a man who put a woman in charge of a skyscraper in the 1980s when no one else was doing that. He’s given women tremendous opportunities, and like his own daughter, Ivanka, said, you couldn’t be a smart, strong, successful woman like herself and have a father who is a chauvinist, sexist pig. 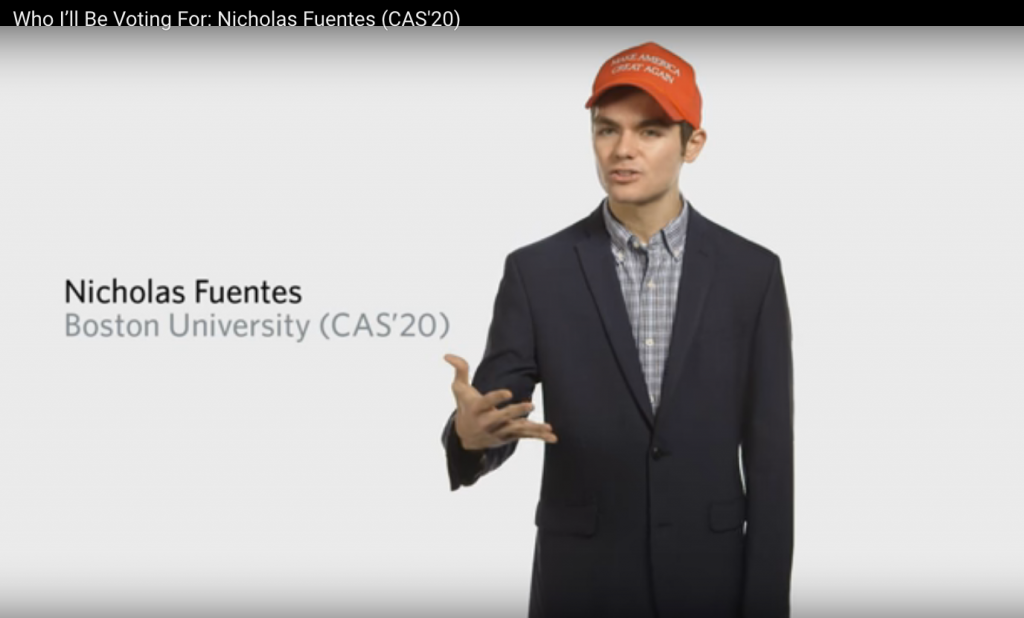 How have people responded to your “Make America Great Again” hat on campus?

I get a lot of glares, a lot of people shaking their heads, I get a lot of people laughing at me, scoffing at me. A few people every now and again will say, ‘hey cool, nice hat, right on, Make America Great Again,’ but for the most part, it’s a lot of derision, it’s a lot of hate. I find it so ironic, because could you imagine if it were another feature about me that people could judge me on. I’m wearing a MAGA (Make America Great Again) hat, and people are making a snap judgement about my character and who I am. Could you imagine if that feature was my Hispanic heritage, if I were wearing a hijab, a yarmulke, if I had black skin, if I was dressed like Trayvon Martin?

Do you have any closing thoughts, or anything you want to put out there?

I guess the only closing thought I’d like to clarify is that, when I’m against multiculturalism, I’m against culture not people. I’m against ideas that are harmful, not the people who hold them. I’m not a white supremacist, I don’t hold any views about race or anything of the sort. It’s all about ideas with me, I’m an individualist at heart.