Deciding who gets to see you prance around in your pajamas (or lack of them) and deal with your lovely morning self each day can be a tricky arrangement. Some people are annoyingly lucky and find their perfect match through a freshman Facebook group or simply by being a risk taker and going the daunting route of ‘random pick.’ Regardless of what your approach is, if the lifestyles you and your roommate live is significantly different, you might find yourself stuck in some uncomfortable situations.

From the neighbor’s boyfriend who stumbles in and pees on your bed, to that eco-friendly roommate that orders 500 worms online, we have collected some of BU’s best dorm life horror stories for your morbid entertainment.

Disclaimer: To protect the privacy of the roommates and neighbors mentioned in the submissions, many terriers chose to remain anonymous in recounting their experiences.

The WORST neighbors ever

“My next door neighbor’s boyfriend drunkenly went into my room thinking it was the bathroom, peed on my bed, peed in a box next to my bed full of letters from my mom and boyfriend, then climbed in bed naked next to my former roommate.” – Anonymous 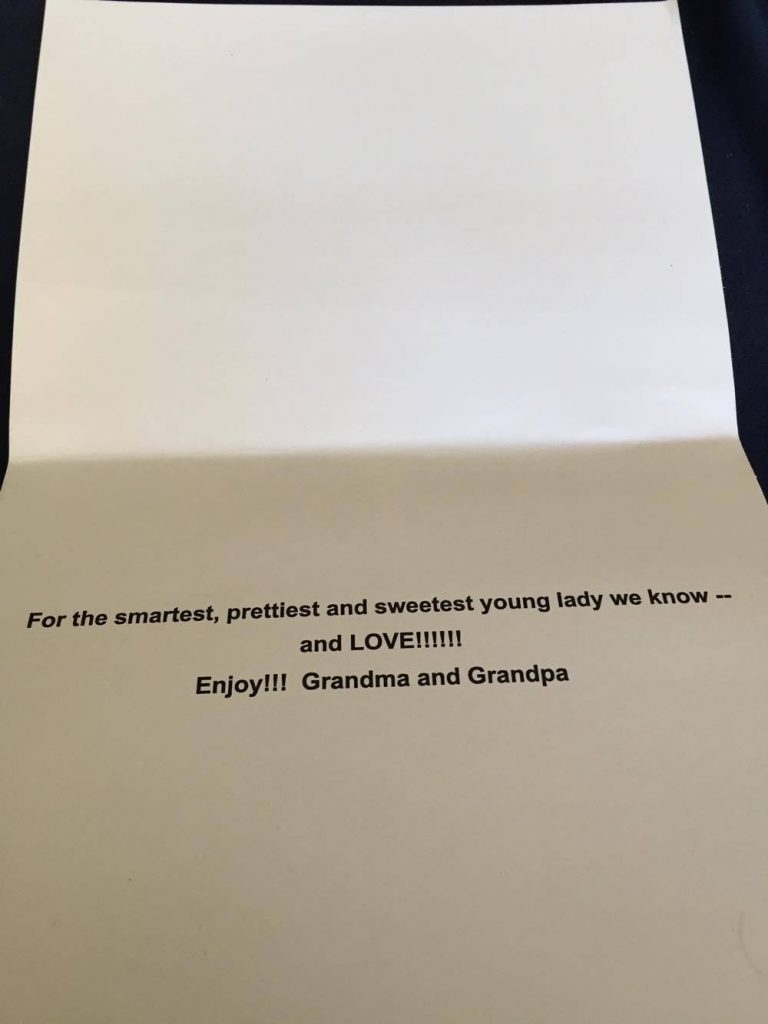 Note from grandparents before it was drenched in pee

A warm welcome for the new roommate

“I puked on my roommate’s $300 bean bag. My other roommate and I both puked our guts out that night and it was my new roommate’s first night rooming with us. Great first impression. He went on a ski trip in the morning so he didn’t talk to us about it. I just threw the bean bag out. Then he got back and told me I could have just taken the cover off and washed it but it was already gone. Also it was his little sister’s bean bag.”   – Mitchel Fernandez (’19)

The neighbors with no regard for time

“At least once a week one of my neighbors would sob uncontrollably in her room, in the bathroom, in the hallway… and like scream – absolutely scream – at like four in the morning. It would wake me up all the time. It was the loudest thing I have ever heard in my entire life, then all of a sudden it would stop and she would be fine. Now the second loudest thing I ever heard was her roommate masturbating. She would moan and scream so loud I could hear it over the music on my computer. I thought she was having like wild sex but it was just her. I mean, do you girl but it’s 3pm on a Monday.” – Jessica Petro (’19)

“So, this girl wasn’t my roommate but she might as well have been. She lived on my floor right next to me. She could never stop singing. At all hours of the morning and night she would be singing! 12 in the afternoon? No problem. 8pm? Sure. But 3am? That’s when I draw the line. When she started singing at 7am, I couldn’t take it anymore and the tears started flowing. These brownstones man, walls are paper thin, like my patience. You’d think I’d be used to it because it was a daily thing, but no. I never want to see her again.” – Anonymous

“My roommate once sat on me at 3am. I came back really late one night and she really wanted to have a ‘fun’ conversation and I couldn’t deal with talking to someone at 3am. So she threw herself at me and sat on my back for a solid five minutes until I heard her out. We weren’t very close. Also she was a lot heavier than I am, so it was an uncomfortable experience.” – Anonymous 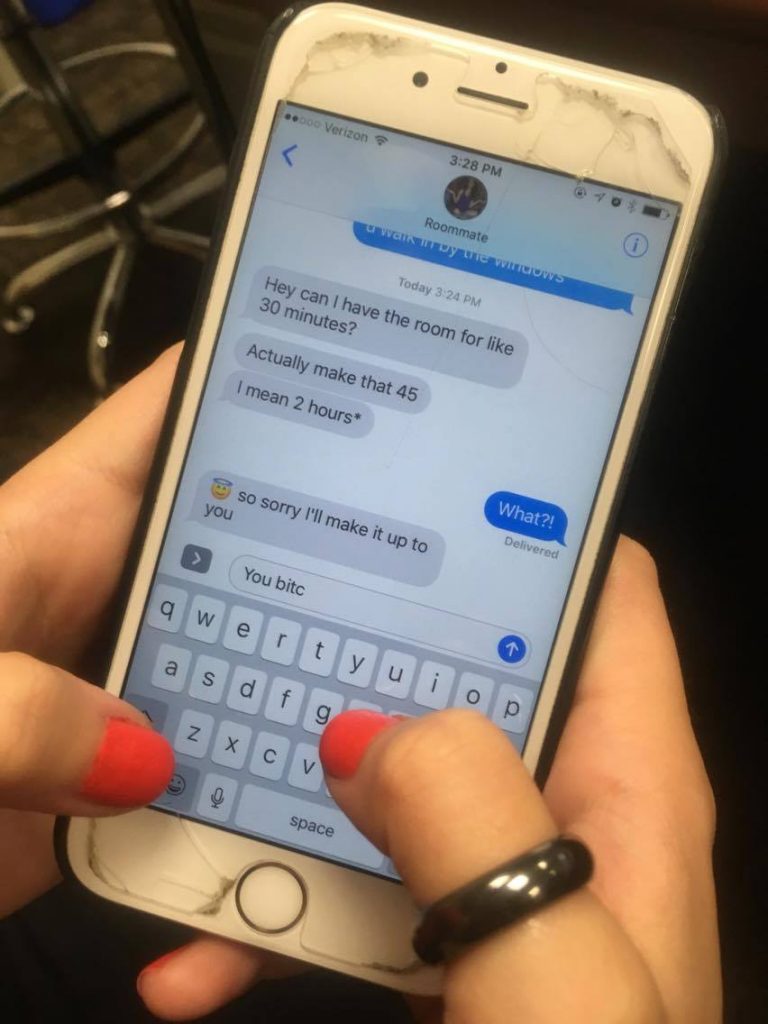 “I’ve been kicked out of the room when I had strep throat so my roommate could have sex. I was wrapped in a blanket watching Netflix and he made me leave.” – Mitchel Fernandez (’19)

“One Friday night they told me they were in the room. I texted them saying I’d be back around 2am. They said okay. I decided to be nice and came back at 3. When I was about to unlock the door I could hear them from inside. I sat awkwardly in the stairwell for 20 minutes texting them “please be finished soon” cause it was three in the morning. After a while I just pounded on the door to get them to stop and they let me in very apologetically. I was sexiled four nights in a row after.” – Anonymous

“It’s around 1am on a Saturday night. I’m extremely high and looking forward to getting into bed and watching Netflix. I get a text from my roommate notifying me of my sexile. My phone’s at 10 percent and I’m freaking out. I text basically everyone I know to try to find someone to go to Insomnia with me and bring me a phone charger to borrow. I wasn’t allowed back into my room until 3am and I ate 12 cookies.” – Anonymous

Having to live with 500 worms

“So our one roommate is trying to imitate our OTHER roommate by being super eco friendly/vegan, and so she started a compost bag–which she left open on our countertop. Then she decided to start a worm farm to put the compost in. So she bought a big plastic box, drilled holes in it, and ordered 500 worms online. When the worms got here, she put them in the plastic box with leaves and shit, and then just left it open on the kitchen table for a full day. Now she has finally put the worms in the cabinet under the kitchen sink.” – Johanna Gruber (’17)

“There’s a guy who removes his flip flops before going into the shower and one who showers with the doors/curtains open.” – Anonymous

“There was always this unidentifiable grey gross gunk in the sink and it had a horrible smell – must have been someone’s face wash. It would always make me gag when I went to brush my teeth.” – Claudia Quadrino (’19)

“I was in a friends room while group sex was happening next door. Three distinct voices. Only guys.”– Anonymous

Five guys and one girl in a very awkward situation

“I had one of my best friends visit me for the weekend and he was suppose to sleep on the floor in between two beds. So it was 1-1:30 in the morning and I was getting ready to go to bed. So I text my roommate that me and my buddy are going to bed already. It’s 2:30, he comes back and he brings a girl back. But he leaves the door open and he’s talking really loudly for a while. Then they go to bed but he wakes me up because he doesn’t know how to whisper. He gets a call – two other guys from his hometown are visiting and they’re like ‘yo can I sleep on your floor, I need a place to stay.’ He says sure why not and so there’s 5 guys in a room and one girl. It’s like 3am and you hear lips kissing and you understand the steps of hooking up. I heard it all. From what I heard I’m pretty sure she just blew him in front of all of us.” – Julian (’18)

And finally the kid that just couldn’t catch a break

“When I first told a friend which room I was assigned, he quickly panicked and commanded that I switch out of it immediately. He told me that that was where he had been living the first month of Fall semester. I remembered all the times he texted me complaining about this roommate. He was a foreign kid who spent his nights naked in the room, apparently masturbated under his sheets, snored like a fighter jet and occasionally stole his belongings. So I sent an email to housing. After almost an entire week of class I was finally reassigned to a new dorm but had to leave due to bad maintenance. They told me another room in the dorm I was first assigned to was almost the last thing available. I knocked on the door to find my roommate. His side was a pigsty hidden beneath the aftermath of a tornado. Things were piled all on top of the bed with things falling out of his closet and overflowing from his drawers to the floor. Boxes from Amazon were the new tiles of the bedroom. He treated his bed as another closet and said ‘oh I sleep in my chair. It’s comfy though so I don’t mind it.’ The man was a legitimate hoarder, so I sent housing an email and they give me my FINAL option: The room I was assigned the FIRST day of the semester.” – Eduardo Caballero (’19)
Share on Facebook
More
BU