“Why are policemen killing people?”

In a room filled with people college-aged and older, eight-year-old Jayden took to the microphone during the Q&A session of “Imprisonment of a People.”

The atmosphere in the auditorium turned somber as the echo settled. Sniffles could be heard as he brought some of the audience to tears.

It’s never a question you want to hear a child ask, but it is a continuing reality for minorities, especially black people, in America. 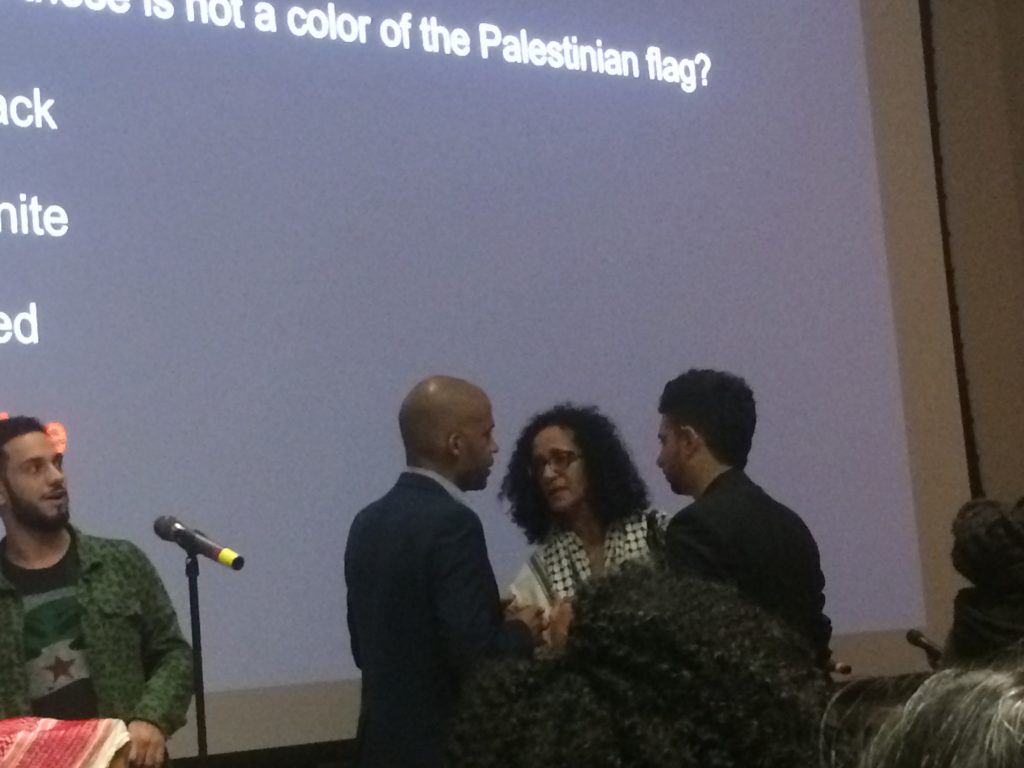 Where is Shaun King??

The panelists: Yamila Hussein, a recent PhD Harvard Graduate who is a Clinical Teacher Educator, Oren Nimni, a founding partner of Community Law Office, and a member of the board of the National Lawyers Guild, Carl Williams, an ACLU Staff Attorney and member of the National Lawyers Guild, and, Shaun King, a Senior Justice Writer for the New York Daily News, wasted no time in answering Jayden.

“I’ve seen kids all over the country asking that question this week. Jayden, we live in a country where a lot of people do a lot of very bad things. People have created this fear in police, but also police shoot people because they’re allowed to. They should not be allowed to shoot people the way they are. Whenever we allow people to do horrible things, they do them,” said Shaun King.

As parting consolation, King told her, “It does not have to be this way. There are things that we can do to make it better, and those of us here, we want to fight to make it better, so that when you get old, you’ll look back and say, ‘I cannot believe when I was a kid police used to do so many horrible things.’”

Last week, the Boston University Students for Justice in Palestine promised that the panelists would, “explore the connections between the Black Lives Matter movement in the U.S. and the Palestinian Liberation Movement in Israel and Palestine,” and, “delve deeper into the military, financial, and moral support given to the state of Israel by the U.S.” They delivered.

With nearly 500 people trying to get a view of the speakers by the time doors opened at 6:30pm, organizers had to usher standees to an “overflow room” that had a livestream of the panel. 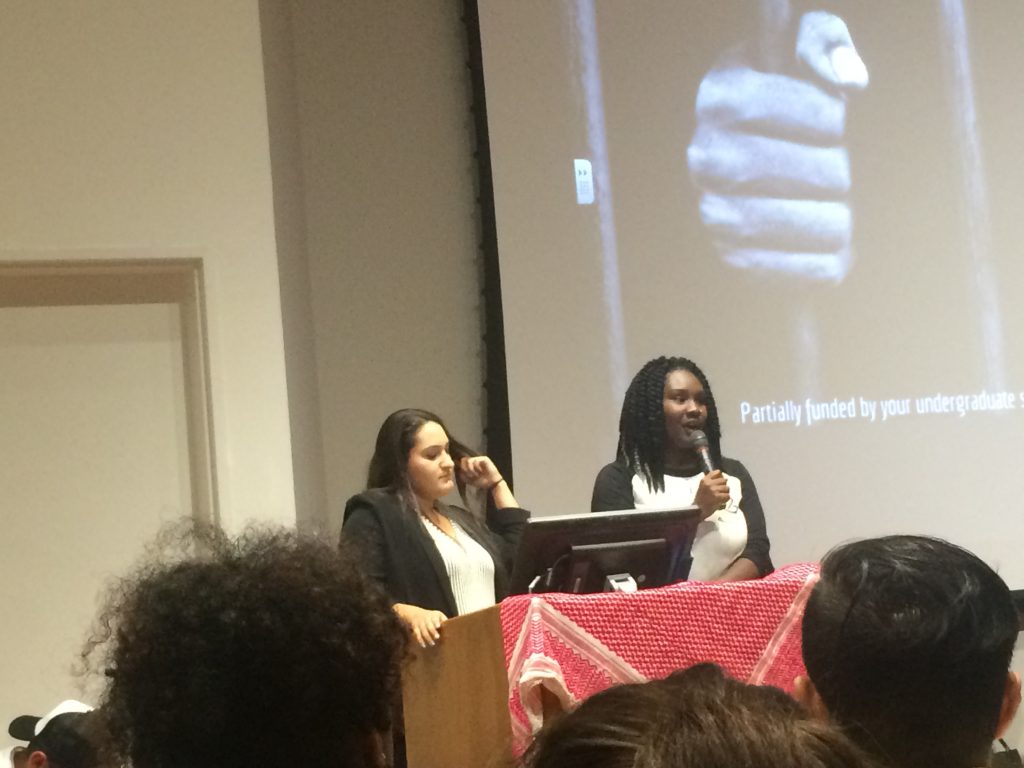 The event lasted over two hours, so we picked the highlights of the panel:

What are the mechanisms of mass incarceration in the U.S. and Palestine, and what are their effects on Black and Palestinian communities?

Yamila Hussein: “You cannot have a settler-colonial state without incarceration. You just can’t. Both the U.S. and the Isreali regime are exactly that. These are settler-colonial states. They are predicated on the elimination of the native. It’s making them invisible in public imagination. Quite often we talk about oppression and we all act as if we are not a part of a settler-colonial project. We are here in a land that was inhabited by nations.”

“If we are not killed, we are thrown in jail.”

Carl Williams: “A settler-colonial project, my words for that are, a system of white supremacy. Whiteness was created. The idea of whiteness is the most deadly thing that has ever been created in the United States of America.”

How did the alliance between the Black Lives Matter movement and Palestinians come to be, and why is it important?

Oren Nimni: “Black-Palestinian solidarity, which has existed across movements, across history. I think Black liberation movements in the U.S. have always had an internationalist bent. One reason for that is it’s the unification of people that don’t belong. It’s the unification of people who are in a state that tells you that you are worthless and you are expendable, and that this is not your place.”

What specific mechanisms, or tools, or policies do you think that both the U.S. and Israeli government use together in order to support and sustain each other?

Yamila Hussein: “Financial aid that the U.S. provides to Israel. Part of that financial aid is weapons. It tests its weapons on Palestinians, and the way it sells them is saying, ‘these weapons have been tested,’ and that’s part of financial packages.

“When we stand up for our rights, it’s called riots, and there’s the whole critique about it being chaotic, whether or not it’s violent. But when kids go out in the streets in Boston because the Red Sox lost…”

What is the role of media in activism; especially in the way it presents protestors and those who resist oppression? 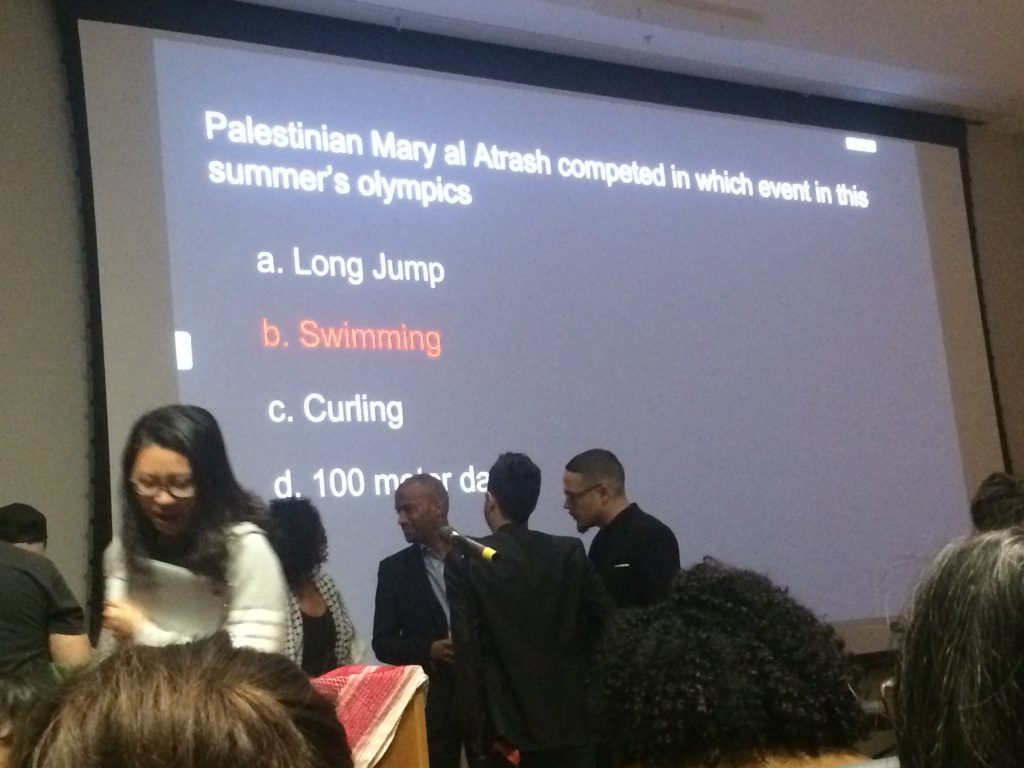 After the event, I spoke with Shaun King about why it is important to be in a setting where this type of conversation can be facilitated.

“Part of why I was excited to be here, I know something about the struggles of Palestine, but not enough, so I just wanted to be here and learn. I learned a lot myself tonight, and so people always have to push their limits,” he said of the event.

King added, “I found it very liberating to also fight for people other than myself and other than my own cause. There is something really empowering about that. Everyday I’m fighting for the struggles for the people I love and represent, but sometimes you have to pivot and find new ways to support other people.”

“College is a great place to be able to kind of learn about what’s going on in the world,” King concluded.