A friendly conversation with the anti-abortion protestors on West Campus

On any given day you can find a crowd of bold lettered, sign-bearing people protesting the Planned Parenthood by West Campus.

The normal student response is to either ignore the situation, or to scream the casual, “Fuck you!” or “Mind your own business!”

This time I decided to take a moment and talk to the priest leading the protest, Mike McNamara, about what he was preaching. 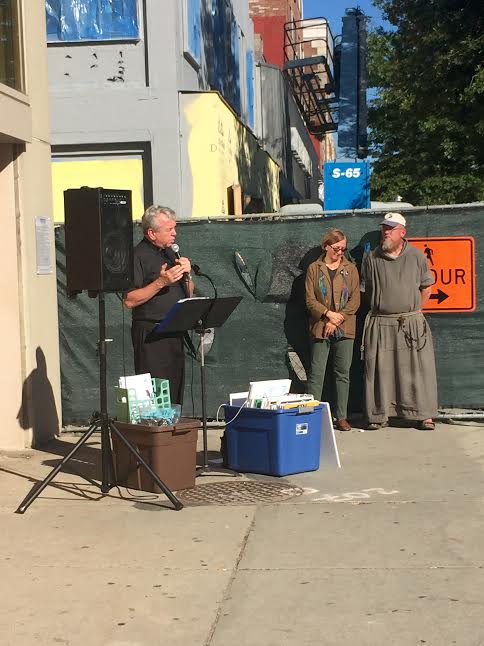 The priest, Mike McNamara, at his make-shift podium

What is your stance on rape?
We’ve seen girls as young as thirteen raped, and all the psychologists say that if they are given a positive environment, then the young girl will rise to the occasion.

What if they don’t want to have a child?
Then they shouldn’t be having sex.

But what if they were raped?
They can’t have that choice. If you were raped and had an abortion, you would suffer more.

Why?
There is something innate about protecting the life within you, even if the child isn’t your own.

Even if they were violently raped?
Imagine a 12-year-old who experienced incest rape –

I’m not talking about a 12-year-old who experienced incestual rape.
Then in the end, we disagree. The grief that would be brought into your life by the destruction of a child would make you suffer more. If you went through the rape then you need to be healed and you wont bring about healing by destroying the child.

But why would a woman want to keep the child of her violent rape experience?
It’s half her.

Where is this counseling?
We have our own counseling.

And what is your organization?
The Catholic Church, we’ve been doing this for thousands of years. We have some of the biggest counseling organizations around. 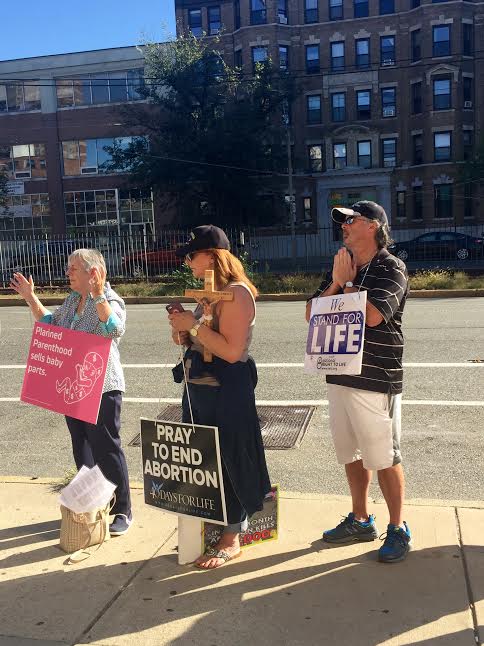 So you’re completely against birth control?
Yeah, we would say no to birth control, but there is a natural form of birth control… Temperature, rising the cervix, mucus count – natural family planning they call it. The woman is able to determine her fertility within five days. It’s OK because it’s natural.

So you’re against birth control because it’s unnatural, not because it prevents pregnancy?
Well, no. You can’t use natural family planning just because you want to. Say you came to me for counseling, I can’t tell you whether to use it or not, I can only present it to you. You have to make that decision with your spouse when it’s necessary, maybe sometimes there’s a struggle in the marriage, whatever it is, but at least it’s natural, and it’s as effective as The Pill, look it up on the internet.

Do you believe The Pill is dangerous?
Oh yeah, there’s side effects, terrible side effects, look it up on the internet. Look up the long-term effects… You have to understand, did you know the effectiveness of the birth control pill decreases? They don’t tell girls that.

And how do you know that?
Science has told us that. The ability to stop the conception decreases.

Aren’t the users still receiving the same amount of hormones in every pill?
I don’t know, just look at the studies. Also, we have a lot of woman now who are in their 30s who’ve been taking the pill since they were 17, 18, 16, whatever it is and now they can’t get pregnant when they’re 30 and they want to have a child, and they do trace that to the pill. 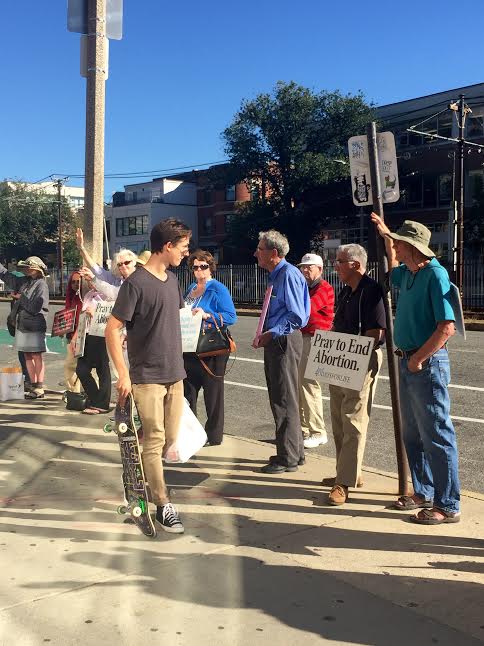 BU student staring down the protestors

I still think it should be someone’s decision to take The Pill or not. This subject shouldn’t be put on a church, or a religion for that matter, it should be personal.

Disclaimer: what he said next didn’t make any sense to me either.

Just for the sake of discussion, think about this. There’s a golfer, he’s a terrible golfer because no one ever gave him a lesson. And one day a golf pro comes up to him and asks him, “do you want a lesson?” and the golfer says, “yes”. But what if he said no? Trying to play golf without a lesson and all, he’s going to hit the balls, but they’re going to go nowhere. You wouldn’t go into any job or life situation without already established norms, you know? Even your college has norms to a certain degree. Same thing when it comes to life, we’ve been doing this for 2000 years, and I’m not saying we’ve done it all right –

Wait, I’m sorry, for how many years?

Two thousand. Cause that’s how long we’ve been around.

I still don’t understand your stance on saying that if a girl is raped, she is psychologically better off having her baby than having an abortion.
The mother is still half of that child. They say we make mistakes, but God doesn’t make mistakes. It is a terrible thing to experience rape, it is a terrible thing to experience incest, but no matter what, two wrongs don’t make a right. And I see this constantly as a priest because I have them [woman who have had an abortion] coming to me in confession. Usually if I say, “do you think it was a boy or girl?” They’ll say right away, usually, if they think it was a boy or girl, they have this sense – this identification. And because they’ve come to confession and Jesus had snatched the child away just as the child was being killed, ’cause it’s innocent, God would never let innocence be destroyed, so the child who is with the Lord in heaven knows completely mercy and forgiveness and compassion…There is fear, confusion and horror in rape, all this stuff, it’s all very valid, and it’s why we have counselors.

What church are you the priest of?
I have a ministry in Scituate, but I am from Boston originally.

I’m Jackie.
I think this is good for us.

I completely agree, it’s always good to hear both sides.