In final Agape Latte, Brad Bates speaks of the afterlife and his ‘aha’ moments

‘Afterlife. Every day’s an afterlife.’

You all know him. He’s one of the most, if not the most, well-known Boston College names. He’s our Director of Athletics, Brad Bates.

Last night, BC had the honor of getting to sit down and listen to him—not in the usual press conference context, but instead in the context of him talking about his own life and his own faith—at the final Agape Latte talk of the year.

Brad began his story by speaking about his upbringing. With educators as parents, Brad said: “So from the earliest I can remember, I had this high value for education and the doors it opened for you, the keys that it handed you for the rest of your life.”

Both of his maternal grandparents were deaf, “And so, through my parents as educators, through my grandparents who were hearing impaired, I was really open from the beginning to engaging difference and trying to use that as a way to grow and learn from.” 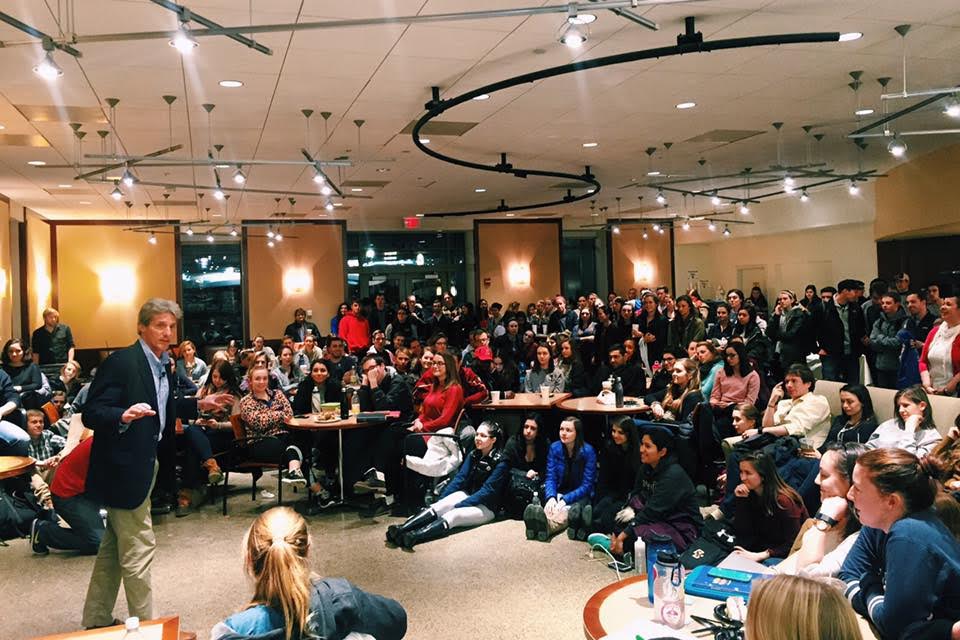 Bates also discussed his multi-faceted faith background. He was baptized Methodist, grew up First Congregationalist, and then got married in a Catholic church and has been regularly going to mass ever since. In the church he attended growing up, services were given by not only his own minister, but also by the local rabbi and the local priest. Bates added: “Needless to say, I was exposed to a broad way of viewing the world, particularly from a religious standpoint. For me, that validated my faith. And it was reinforced because I’d been exposed to other ways of viewing the world.”

He said: “Never in my life did I ever doubt that there was a God, that Jesus was his son, that there is an afterlife. I was very convicted in those beliefs and in my faith—until Mr. Miller’s tenth grade English class.”

Bates spoke of a specific book he read in that one high school class that completely shook him and his entire belief system as a young adult. The book was No. 44, The Mysterious Stranger by Mark Twain, which is about a character named 44 who is the Devil’s nephew. At the close of the book, 44 makes a statement about there being no afterlife.

Regarding this ending statement in the book, Bates said:, “I’d never, ever experienced doubt in my faith until I read that line.”

Immediately upon finishing No. 44, The Mysterious Stranger and his disorientation by 44’s ending statement, Bates said that he did as much research that he could on the afterlife. He read about the views of doctors, all different religions, etc., then ended up taking a class entitled “Cadaver Anatomy” in his sophomore year of college. Ultimately, through this class, Bates came to a conclusion. 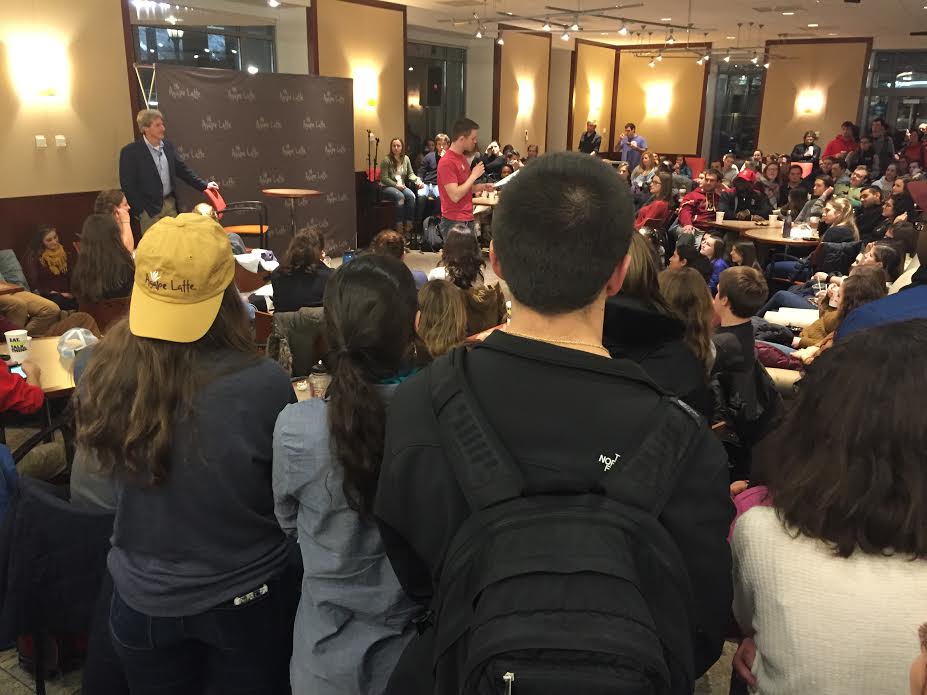 He said: “I’ll tell you, one of the most powerful ‘aha’ moments I’ve had in my life was when I walked into that room, and I saw that body, and I realized that this [pointing to the body] is not soul—that this is just a container. It’s a way we visually and optically relate to one another and envision one another. But once this doesn’t serve that soul anymore, there’s no use for it.

“And I had this presence. It was interpreted by me at the time as, ‘Quit worrying about the afterlife. Worry about your current life.’

“And so I really think of life now as a series of afterlives. How many of you are seniors? So you’re about to embark on your after-BC life right? And you’re probably nervous… You were probably anxious and nervous about your after-high school life when you were coming to BC. And your after-April 5th life tomorrow.

Speaking on relationships, Brad then told the story of how he met his wife.

They both went to the same college and lived in the same dorm for both their freshman and sophomore years. They had never once met or spoken to each other, until one day, in the last week of their sophomore year when Bates was headed to class, they ran into each other with a mutual friend and met. He went on, “I spent the next 15 or 20 minutes with Michelle. And I made a huge mistake. I didn’t get her number. But there really wasn’t a sense of urgency at the time…I figured we’d find each other next year.”

Fast forward three months. Bates’ wife got in a car crash with a drunk driver, fractured her neck, had to get pried out of her car with the Jaws of Life, was rushed to the hospital, and was in such a condition that she was given her last rites by a priest. She was in a coma for four days and then woke up, had to get two of her vertebrae fused together, and then she had to spend the next two years learning how to walk and speak again.

After those two years, she went to return back to school and classes and received an unexpected surprise.

Bates recounted with a laugh, “So she’s nervous; it’s her first day of classes. And all of a sudden comes this idiot on a bike and he almost hits her. That might be me. I was on my way to class, but once again, I forgot I had class. And I got her number that time. 33 years later, here we are.”

Bates concluded this: “I never would have met her again if she hadn’t experienced that. 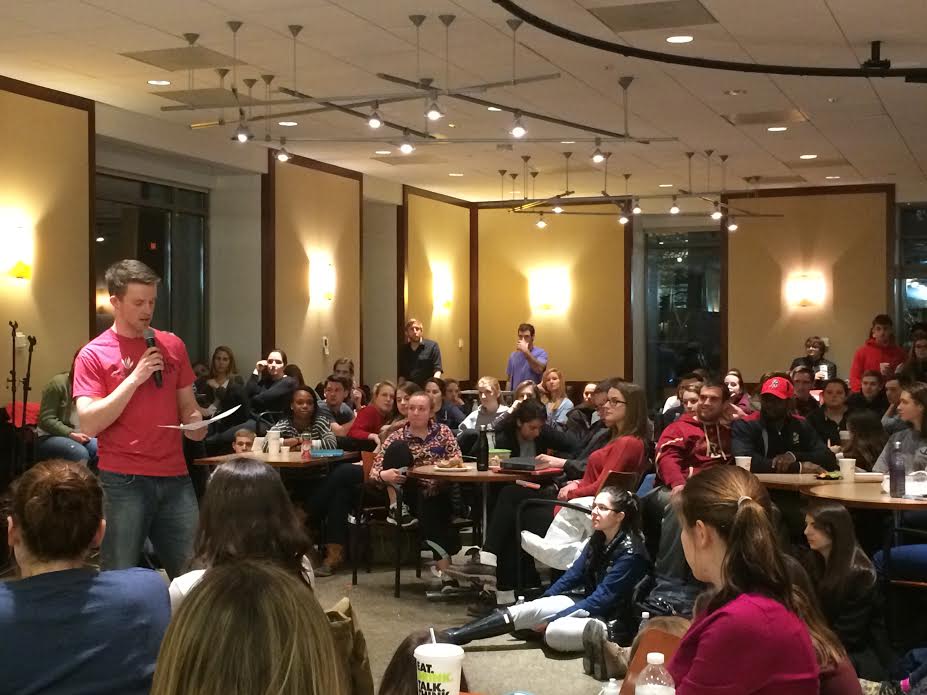 The last story Bates told was that of a life-changing experience he had in his junior year of college, when his friends convinced him to go to a Noam Chomsky talk which he said he never would have decided to go to on his own.

He recalled, “As I’m sitting in that room, this world opened up to me: that all these authors, politicians, musicians—people from throughout the world—are coming to these campuses. And I have access to this? In four years—that’s it? And so this is the brag-about-BC part.

“BC has unbelievable resources. And you only get four years. Don’t miss a moment.

“Your commitment to this place is to maximize your development and formation and leave this place to make the world better, and whatever endeavors you engage in better than you find them. But take advantage of the people here, the resources, the people they bring to campus, and your BC experience.

“Afterlife. Every day’s an afterlife.”