We spoke to the only guy at Arizona State protesting Trump

Armed with a deep conscience and a microphone, Martin is ready to defend against injustice

While other students were racing to grab something to eat before hustling to their next class, Johnny Martin, 24, stood alone to occupy Hayden Lawn following what he perceived as injustice in the wake of the Charlottesville riot in Virginia.

Martin, a religious studies major at Arizona State, has launched a one-person war against racism and intolerance on Hayden Lawn between classes. He currently has his sights set on fighting against the intolerance he believes exist in the Trump Administration.

The Tab spoke to Martin concerning his views about the president’s response to the riot and why he felt pushed to protest.

“I’m angry,” said Martin. “Less than a week ago, we had a terrorist attack in Charlottesville and we are now watching Nazis take to the streets of America. And, I hold Donald Trump directly responsible for empowering White Supremacist.” 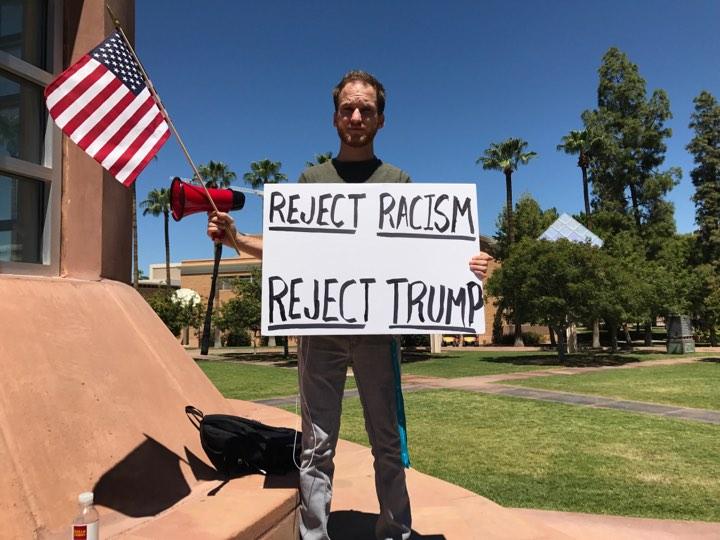 Martin also addresses the president’s inflammatory campaigning style as a key element in stoking the flames of racism across the nation.

Martin has been attending ASU for several years and even gained reputation as “the blue hat guy” after continuously counter protesting Brother Dean, a well-known Trump supporter and hate preacher.

Although he protest alone, Martin believes addressing racism not only nationally but on ASU’s campus is important. When he found out about the alt-right posters a freshman student’s mom found on campus, he was energized to protest again.

“I’ve directly seen the impact of racism and hate. I think we–and I mean especially white people–need to actively reject that because White Silence equals violence,” he said. “When white people don’t speak up about stuff that is happening they are complicit with white supremacy.”

Many ASU students have shown their support by providing him with water and even engaging in positive conversation with him while he is protesting.

ASU football player, Rene, took to Twitter to show his support by sharing a video with the caption “My man here at ASU”. When asked about his reaction to the one man protest the Rene senior told The Tab, “I think there should be more of it, I understand why people aren’t because of class, school, and work. I love the first amendment and I’m happy to see him expressing it.”

Martin is currently running for office in Mesa for Arizona’s house of representatives for district 25. He also plans to continue his protest between classes and organization meetings.

Martin believes "that people who are Republican or conservative are not inherently racist or complicit but they are if they continue to support this dangerous agenda.”