The Arizona State student who revealed she was undocumented on Facebook has spoken out about the abuse she received because of her post.

Belén Sisa, 23, posted to say she was undocumented and paid taxes last week, and while she received positive responses, she also faced criticism for being an undocumented immigrant.

We spoke to Belén, who is a Political Science major about how she feels about the criticism she received.

“The responses show that even if immigrants are doing the right thing it doesn’t matter to these people,” she told The Tab.

“It’s not about being a good immigrant or a bad immigrant — it’s about the fact that they don’t want us here.”

She was born in Argentina and moved to the United States aged six on a visitor visa. Through President Barack Obama’s Deferred Action for Childhood Arrivals programs, she is allowed to study, work, and live in U.S. without the fear of being deported. 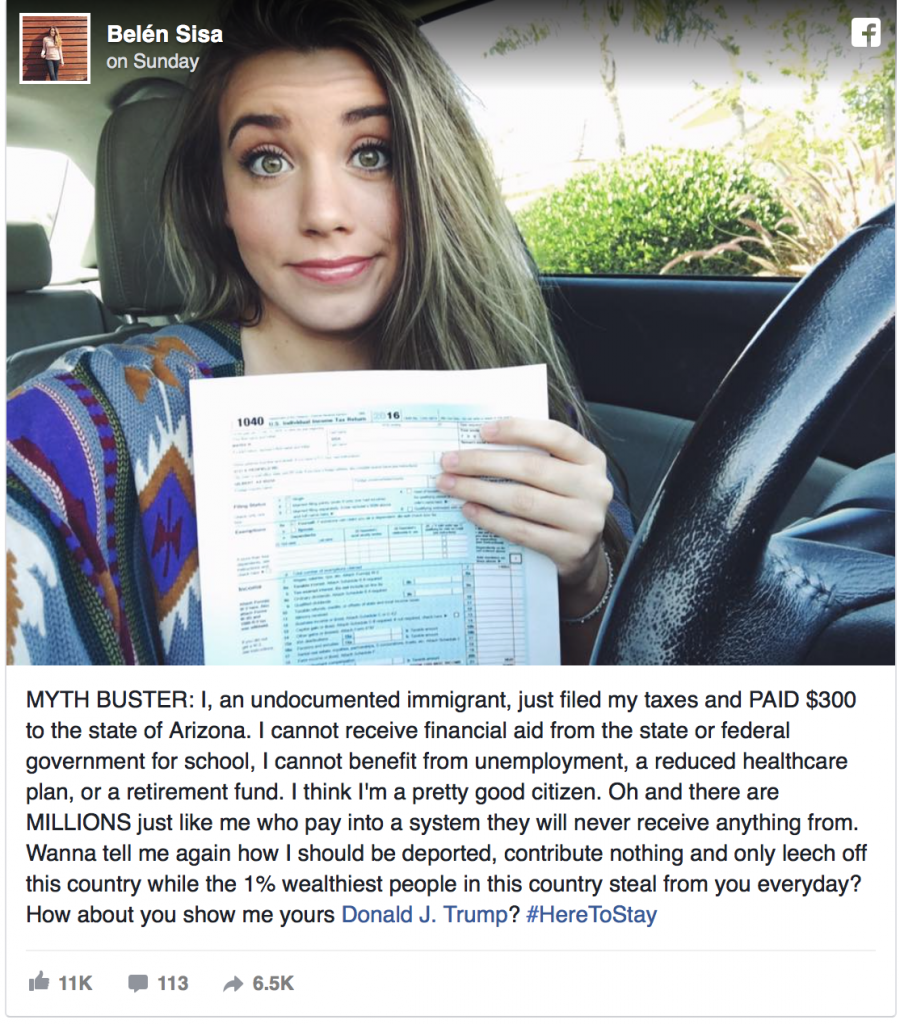 She has been working for four years and this year she decided to share her tax form on Facebook to debunk the myth of immigrants taking from the U.S.

MYTH BUSTER: I, an undocumented immigrant, just filed my taxes and PAID $300 to the state of Arizona. I cannot receive financial aid from the state or federal government for school, I cannot benefit from unemployment, a reduced healthcare plan, or a retirement fund. I think I’m a pretty good citizen.

Oh and there are MILLIONS just like me who pay into a system they will never receive anything from. Wanna tell me again how I should be deported, contribute nothing and only leech off this country while the 1% wealthiest people in this country steal from you everyday? How about you show me yours Donald J. Trump? #HereToStay

Belén has been consistently paying taxes ever since she started working four years ago through DACA.

“The whole reason for the post was to bust the myth that immigrants don’t contribute to this country and that we don’t file our taxes,” she said.

“In some cases, we pay taxes to the state and federally…I think it’s about $11.6 billion that we contribute in state and local taxes. We contribute a lot of money that we will never be able to claim.”

Since March 26, the post has been shared thousands of times with mixed responses. “Sunday night after I posted that morning, I started getting really negative hate mail to my Facebook. Then later in the week it continued to all my other social media.

“It was anti-immigrant, right-wing, Trump supporters who were attacking me.”

Belén’s hate mail left comments on her appearance and calling her “so cute but so stupid.” Many of the commenters screenshotted her post saying that they were reporting her to the FBI and ICE-Immigration and Customs Enforcement. Some people even made violent memes of her “They used Photoshop to put my head on a cartoon so that it looked like Donald Trump was throwing my head over the wall.”

Despite the attacks of the Trump supports, Belén took pride in all the positive comments and support. 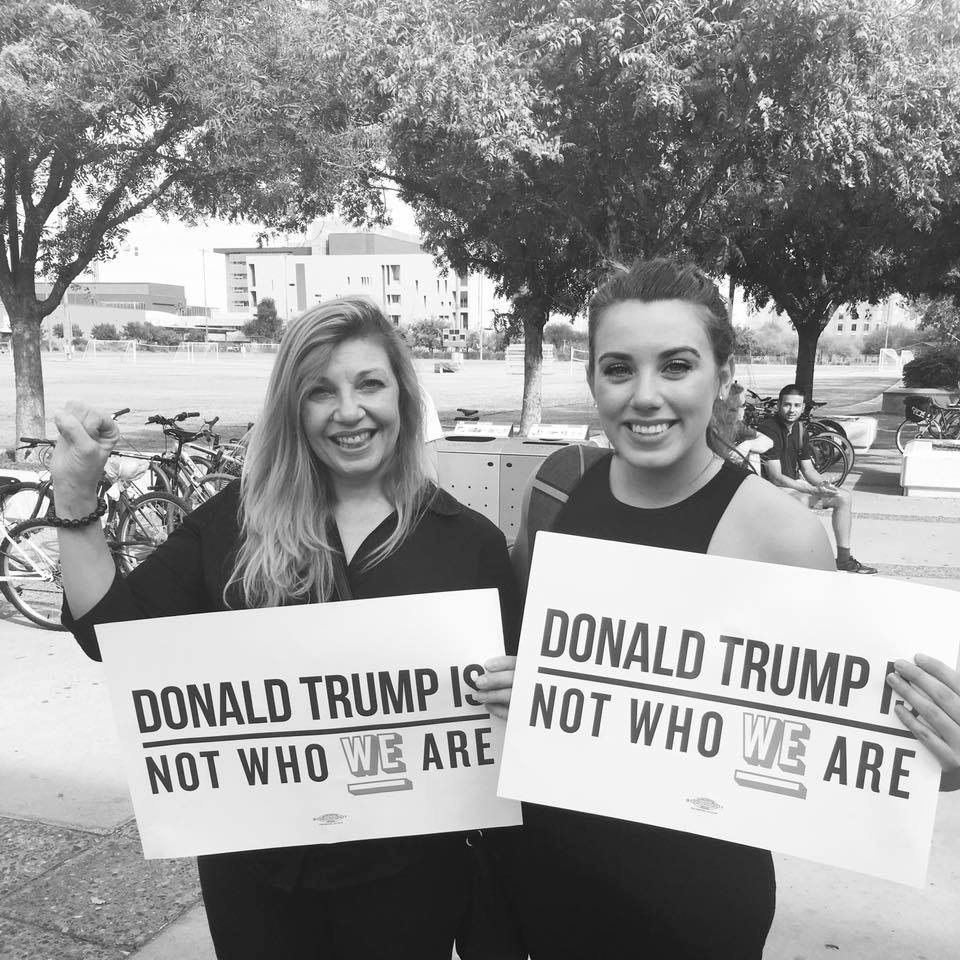 “It was great to have people come together. The point of the post was for people to open their minds and eyes to the reality that undocumented people are going through in this country,” she explained.

It was not her intention to go viral but it was her intention to start a conversation about what the lives of immigrants really look like and bring awareness to their reality. “I want them to see that post and educate themselves and that everything you’ve ever known or every stereotype that you’ve ever heard isn’t really what’s real.”

Belén felt confident in speaking out without hesitancy, which she says is a byproduct of her being an activist since high school.

“Whenever I graduated from high school in 2012 is when I got involved with the immigrant rights movement here in Arizona, she said.

“Right after the deferred action program was announced by President Obama. That is when I met up with people who were like me they were young and undocumented who wanted to go to school and be able to be successful. We want to fight for our families not to be deported and for us to stay together. That is what started my involvement in everything.”

She’s wanted people to understand that being an undocumented student means something different from being a student with citizenship.

“It’s been hard to basically be a normal student, we’re not. There are special needs that we have that need to be addressed and provided for.”

ASU has only provided a general public statement from Michael Crow, the president of ASU. Belén, however, has received emails from ASU police and the counseling department offering support and safety advice after the negative responses to the post. “They are taking it very seriously, ASU police offered to connect me with police in my jurisdiction,” she said.

“ASU counseling called me and emailed me and with all the hate mail they weren’t sure how I was doing so that was really good that they reached out.” 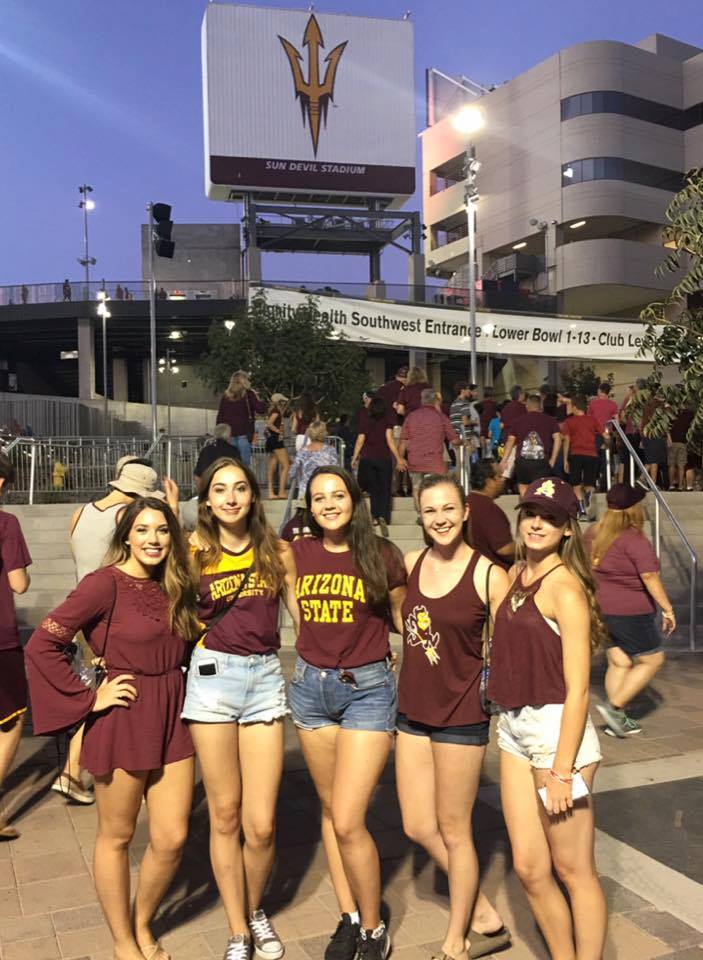 Belén is the co-founder of a club on ASU’s campus called Undocumented Students for Education Equity. It is founded by students and they are currently working to get resources and safe space for undocumented students to get support. “The students are currently the ones who are spear heading in creating support for the students and their families. They are making sure they have the information and resources that they need things because things could happen quickly, they or their families could be detained. So right now we are working on that and making sure that students have access and equitable education.”