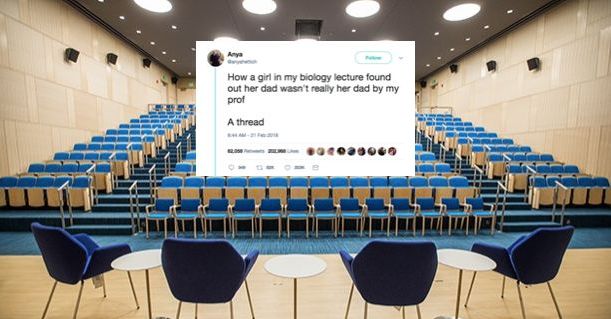 Now her parents are getting a divorce

We've all gotten bad news from a professor before, but nothing like this. Imagine finding out your entire life is a lie during a biology class — that's what seemingly happened to a girl who found out her dad isn't really her dad in front of 200 students in a biology lecture.

Anya, a student at California State University, documented a play-by-play of the affair in a Twitter thread.

It begins, 'How a girl in my biology lecture found out her dad wasn't really her dad by my prof'.

It all started when a biology class was discussing different blood types, and one girl couldn't figure out why her blood type didn't make sense on her punnet square.

She told her professor that her dad was O and her mom was A, but she was AB. The professor, Lisa Anderson, explained that outcome isn't possible, and even drew the different punnet squares to demonstrate why it didn't quite match up.

But the girl in question was confident she had the correct blood types for her mom and dad, and insistent the professor was making some sort of error.

My prof explained that that’s impossible, that she’s confused on the blood types or something – she even drew out the different Punnett squares to show her

So after class, the girl talked to her mom to double check her parent's blood types. When she returned, the professor asked if she had been mistaken or confused.

As it turns out, her mother had an affair with her husband's step-brother and kept it a secret from both of them for 21 years.

"So technically, she's been raised by her uncle and not her dad for her entire life," Anya points out.

TURNS OUT, her mom had an affair with her husbands brother which is his step brother

Because her professor told her she was incorrect, and asked her to double check her parent's blood types, she figured out the truth: her uncle is her dad, and the man she believed to be her dad is her uncle.

According to Anya, the girl's parents are now getting a divorce.

Now they're getting a divorce

By far, this is the best tea to have ever been spilled in a biology class.

Some Twitter users have said the story seems a bit unbelievable, but even more have said they've witnessed similar occurrences at the hands of science.

My sister found out that the father that raised her wasn’t her dad based on my 7th grade science homework. It was dealing with eye color and hereditary traits.

The story has split the internet into two sects: those who believe in the power of science, and those who think it's a menace to society that needs to be stopped at all costs.

Biology ruins homes. We must stop science at all costs.

The Tab has reached out to Anya for comment.