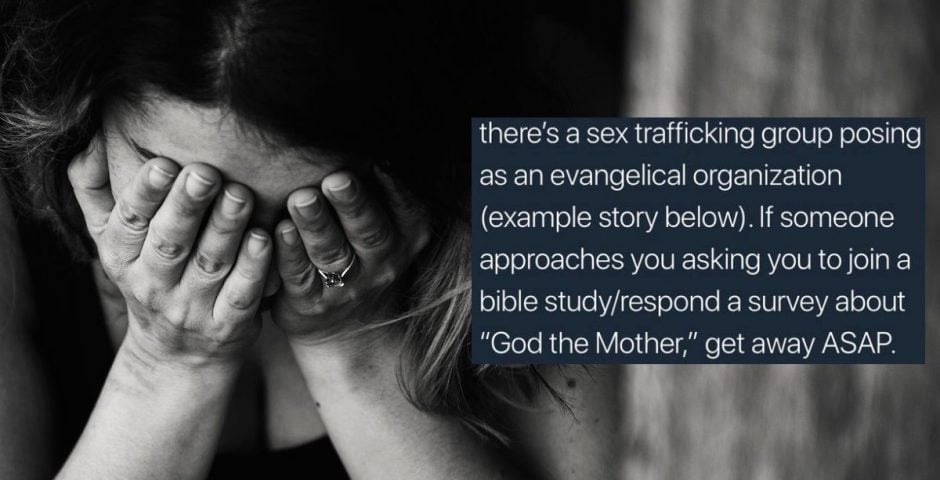 The PSAs circulated are completely untrue

The rumors you've been hearing about a "sex trafficking Bible group" operating on your campus are false, The Tab can confirm.

False PSAs are circulating across the country with the same variant of a bogus story involving a religious group called "God the Mother."

The reports all involve details along the lines of: a group tries to invite you a Bible study, but they actually want to kidnap you for sex trafficking. The same rumor has made its frantic way through college campuses throughout America.

A typical post reads: "My friend's sister got approached on campus Yesterday. There were two ladies asking her about her beliefs on god and they tried to get her to 'hang out' with her. THEY WERE ABDUCTORS FOR SEX TRAFFICKING."

‼️LADIES THIS IS NOT A DRILL‼️
I just got approached by two ladies at Fashion Show mall asking about God The Mother and if I wanted to join the Bible study… luckily they weren’t aggressive, but this is real so be aware!! Stay safe ? pic.twitter.com/d1j9qPGbzm

APPARENTLY THERE IS A “RELIGIOUS” GROUP IN THE KENT AREA THAT TRIES TO GET YOU TO GO TO A “BIBLE CLASS” BUT THEY ARE REALLY TRYING TO KIDNAP YOU FOR SEX TRAFFICKING. RETWEET TO SAVE A LIFE. 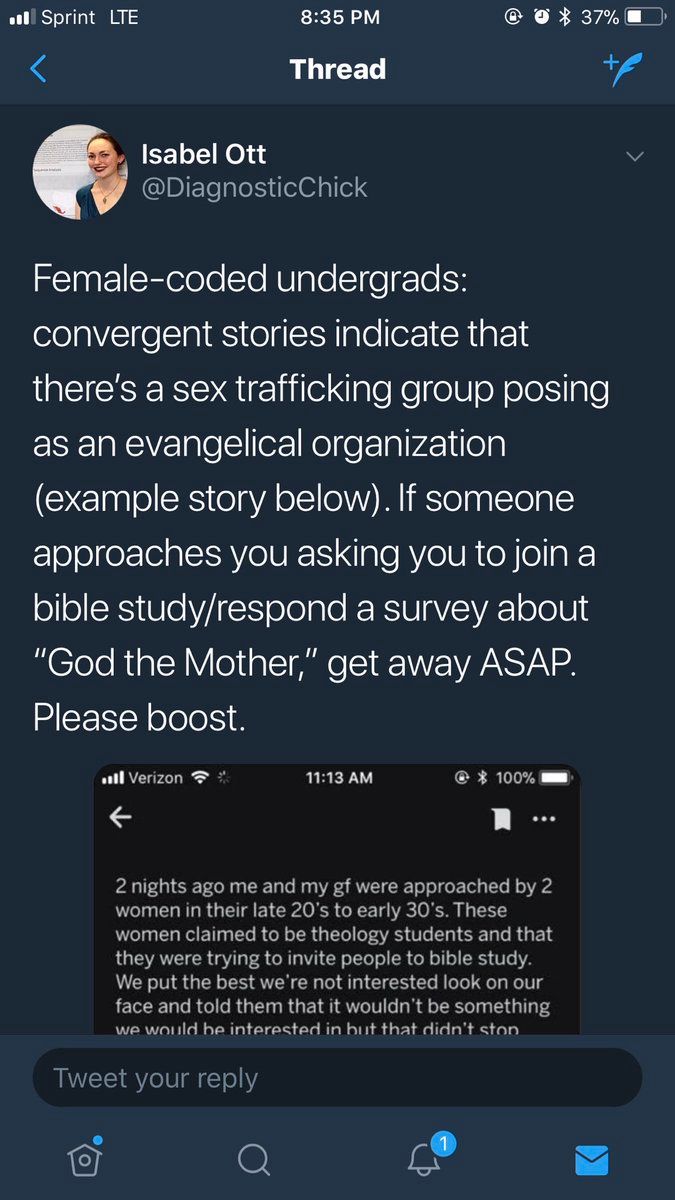 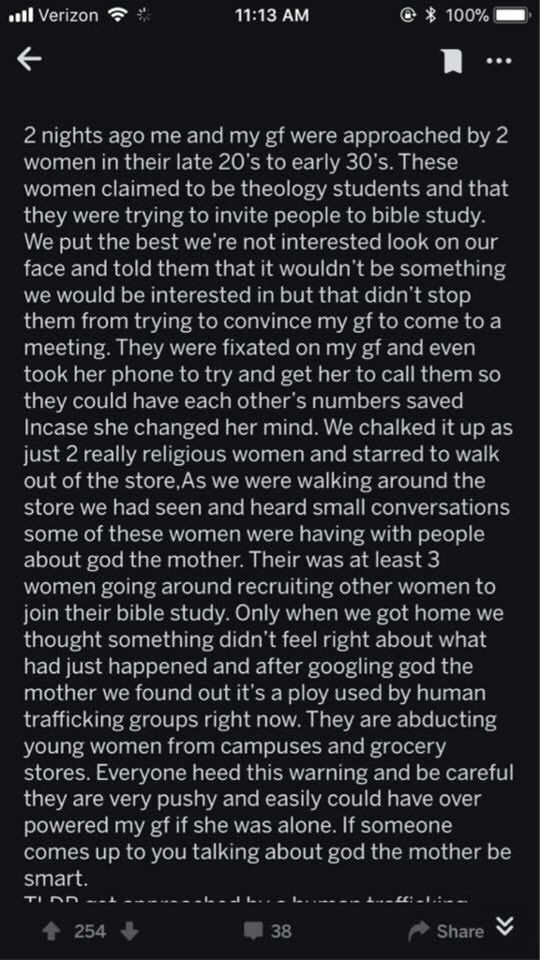 Please be cautious and walk in groups on and off campus. There are rumors of mischievous women approaching people about a fake bible study session in order to lure them into a sex trafficking scam. If approached, find safety and call the Kent Police non-emergency line. 3306737732

TECH STUDENTS!!!
There are two men walking around campus trying to get into dorms. They are connected to sex trafficking. They came to our dorm in the middle of the day and tried to open it, luckily it was locked. Be safe!!!

LADIES!! I’ve heard multiple stories of girls on campus being approached for a “bible study” and have been missing and linked to sex trafficking. Please remember to be careful who you talk to. As sad as it is, be careful of walking alone and talking to strangers

@OleMissPolice Rumor around campus is that there's a sex trafficking ring talking about "God the Mother" and asking students to attend a Bible Study. Have y'all heard about this?!?

all my GSU ladies stay safe!! there’s been reports of two women coming up to girls on campus talking about bible studies at night & getting their contact info. but it’s all a scheme for sex trafficking opportunities (happened at KSU too) #gsu #georgiastateuniversity

This would be terrifying, if it were true. But it's not. There is no sinister sex trafficking group going from college to college – it's just a religious organization called the World Mission Society Church of God. They're originally Korean, and have branches across the US.

Given how the PSAs from terrified students are all identical, there is no way of verifying that these scam encounters even took place, let alone involved sex trafficking.

Police have confirmed the rumors were false – there is no credible threat that this church is involved in human trafficking.

“We have investigated this complaint and have found nothing to substantiate that this group is or has been involved in any criminal activity,” cops in Lexington, Kentucky said.

The church even released a statement to deny that they were involved in the illegal sex trade, announcing:

"Recently, we were made aware of a social media post in which someone appears to accuse the Church and its members of being linked to a ring of sex/human trafficking. Nothing could be further from the truth. We are a church of Christian love and denounce any such activities wherever they may be carried out."

They're definitely less sinister than your regular campus preacher weirdos trying to convince you jacking off is going to send you to hell.

– We tried the weirdest Japanese and Korean beauty products

– 'Mass Shagging Of Eachother' at the Bombed out Church