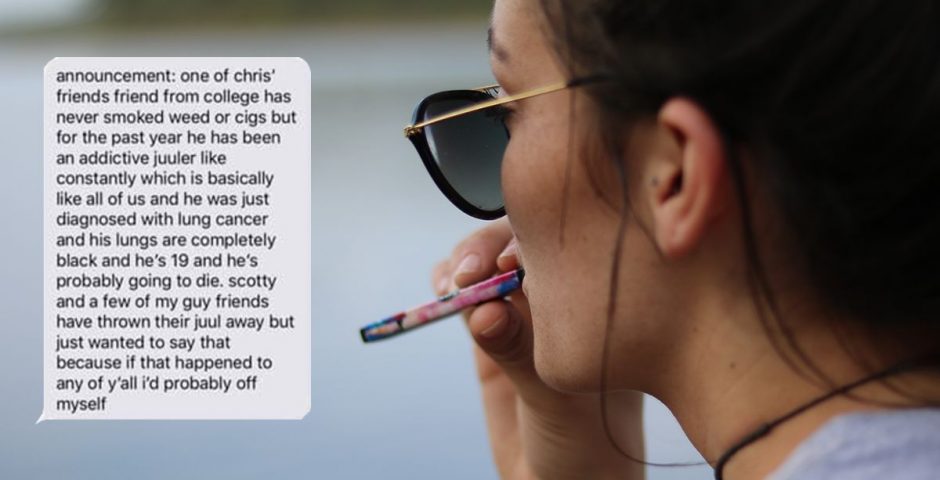 Groupchats up and down the country have been ablaze today, with rumors about " kids getting lung cancer only from Juuling."

The messages have been circulating at NYU, to Iowa, to as far away as USC.

There's only one problem – there is no way that it's true, as experts clarify that lung cancer takes "years to develop."

Rumors have appeared in various incarnations. One of the most widely shared reads as follows:

"announcement: one of chris' friends friends from college has never smoked weed or cigs but for the past year he has been an addictive juuler like constantly which is basically like all of us and he was just diagnosed with lung cancer and his lungs are completely black and he's 19 and he's probably going to die. scotty and a few of my guy friends have thrown their juul away but just wanted to say because if that happened to any of y'all i'd probably off myself"

If you believed this I feel bad for you

You would think that common sense would prevail, and that the first reaction to hearing someone's lungs going black in 12 months only from Juul use would be the same as mine: "nah dude, that's so obviously bullshit."

More like this – Ranked: The most sleep-deprived majors in America

Despite the dubious chain-mail nature of the story, students across America have taken action, with some throwing their Juuls out into the street, or smashing them with hammers.

…throwing them out in the snow… pic.twitter.com/SV614UVhG6

We asked Dr Kien Vuu, clinical professor of medicine at UCLA-David Geffen School of Medicine, about whether the diagnosis described in the texts was in any way possible. He said: "It is unlikely that 'Juuling' has a short term carcinogenic effect which would cause cancer so early in these young people. It usually takes a lag time from an exposure of a carcinogen before cancer ensues.

"The contents within the Juul capsules are unknown in many cases, so it is possible for people to develop bronchitis, bronchiolitis, or forms of acute lung injury which can be severe. The carcinogenic effects of these additional substances long term are unknown at this point; so to say that the contents of Juul has no carcinogenic effects would be unjustified – we just don't know."

The route of the rumors is unclear at this point — though it may have something to do with an NYU study released last month, which indicates vaping can result in an increased risk of heart disease and cancer.

Dr Moon-Shong Tang, who conducted the study, was somewhat baffled when we asked him whether lung cancer could develop after only one year of vaping.

"I am not a medical doctor, but it is well known that tobacco smoke-induced lung cancer takes years to develop," he told The Tab.

"I am not aware of any publications that establish the relationship between E-cig smoke and lung cancer. Our results raise the possibility that E-cig smoke may cause lung cancer. therefore, it is wise to quit smoking."

Unsurprisingly, the spokesperson for Juul denied the allegations vehemently.

She told The Tab: "The claim circulating on social media that individuals' friends 'have been diagnosed with cancer as a direct result of the JUUL' is unsubstantiated and reckless. For all our customers, partners and employees that are on our important mission with us to improve public health, know that we will protect the company and our customers and take legal action as appropriate.

"At JUUL Labs, we care deeply about our customers. Many people in the company and their friends use JUUL as well, so we include ourselves as our customers. We are a mission driven company seeking to eliminate cigarettes by providing a true alternative for adult smokers.

"JUUL incorporates important technological advances and best practices which include the following; First, JUUL is temperature regulated to minimize the emissions of combustion-related degradation products. Second, we do not add chemicals of concern on key FDA lists such as formaldehyde as ingredients. (Note that nicotine, while on these lists, is included in our product to facilitate switching for adult smokers.) Third, independent third-party laboratories have conducted validated analytical tests on the aerosol contents of JUUL and we are excited to present these results within the SRNT scientific forum at the end of this month.

"The best decision is to never start smoking or initiate nicotine-containing products. We stand by our mission to serve as a true alternative to combusted cigarettes for adult smokers. We will continue to respond as necessary to unfounded allegations."

More articles recommended by this author:

– Revealed: Which uni smokes the most cigarettes?

– A ranking of cigarette packet pictures, based on their artistic merit