He posed topless with a rifle and spoke about confronting students

Ken Parker, best known as the former Grand Dragon of the KKK, a current neo-Nazi and a Political Science major at the University of North Florida, has been suspended after threatening his classmates.

Parker, who we exposed as a junior at UNF, told other students: "I am WHITE and PROUD, and these queer balls have yet to confront me on campus."

When asked if that was a threat, he said: "That is not a threat. It is a fucking PROMISE!!!!"

He then posted a topless selfie in front of the mirror, holding up a rifle. His swastika tattoo is visible on his chest. 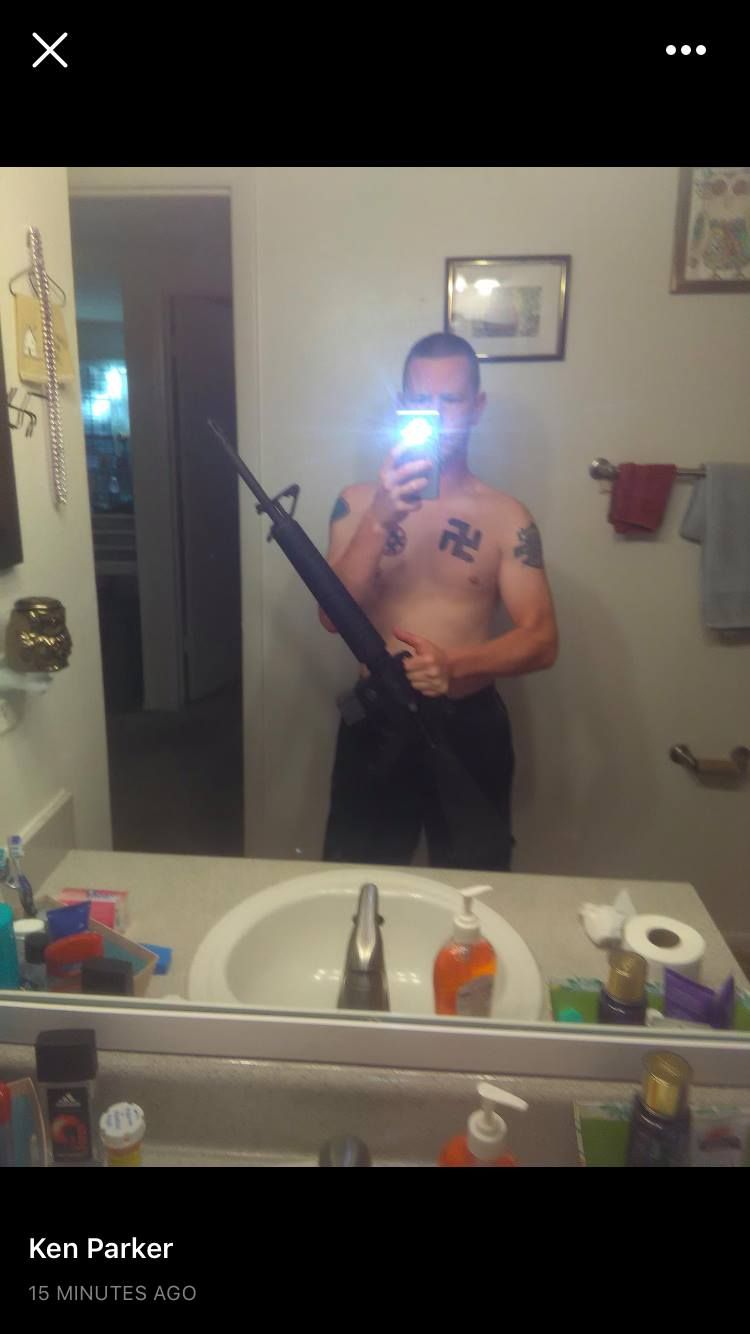 He has since deleted these comments 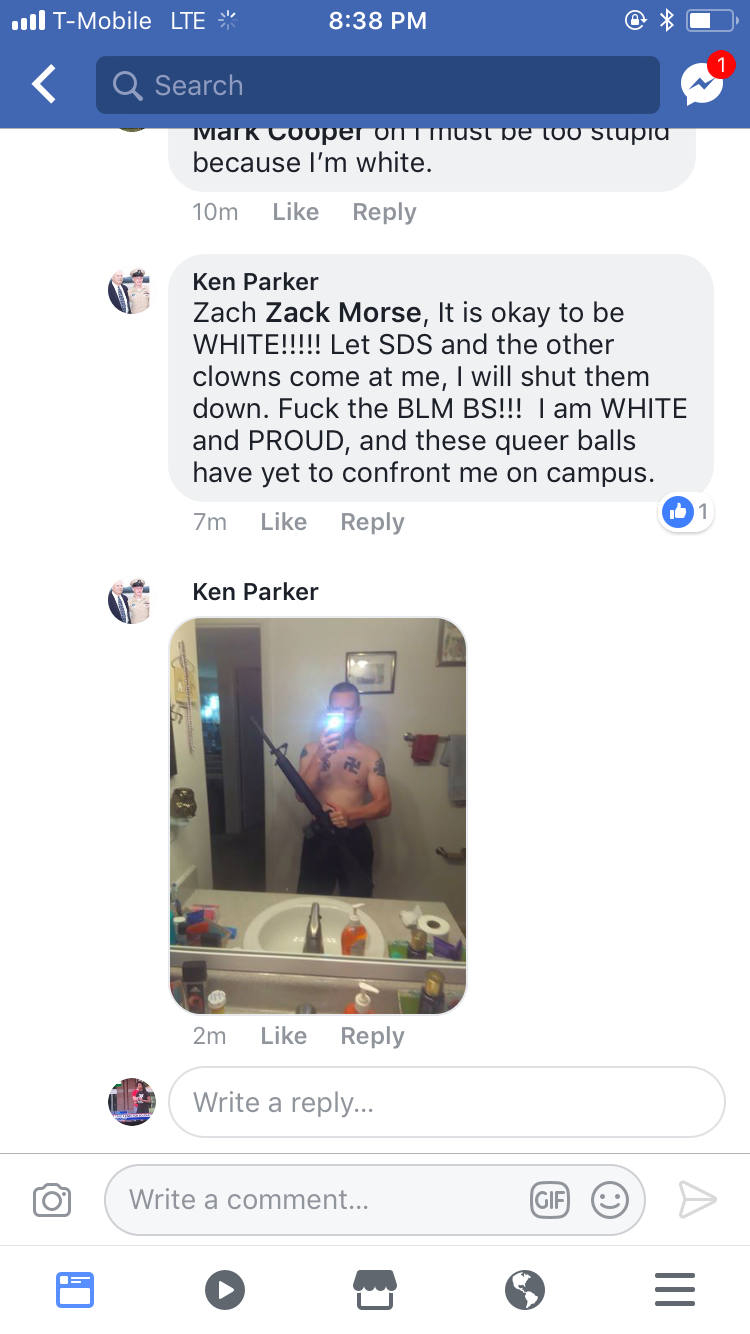 Writing to a student on a Facebook comment thread, he said: "It is okay to be WHITE!!!!! Let SDS [Students for a Democratic Society] and the other clowns come at me, I will shut them down. Fuck the BLM BS!!!"

He also called someone a "pole smoking queer, and your WHITE guilt seeps through your pores." 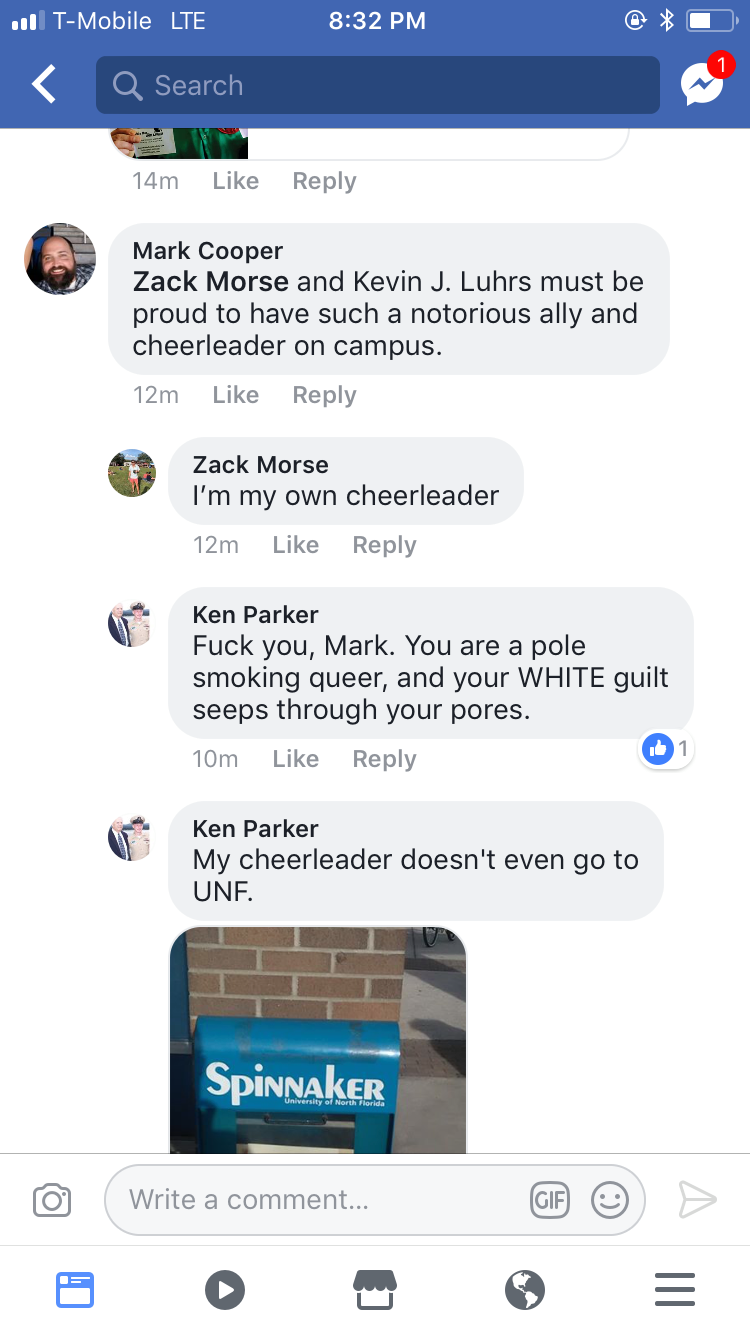 Ryan McClure, a senior at UNF and local activist, told The Tab: "It's not a vague threat – it is a threat. He's posing with a gun and telling us 'come at me'. That's a threat. It creates a toxic environment, it creates a place where people can't learn and feel safe."

"If the university refuses to do anything about this, it really shows UNF does not care about black students," he added. 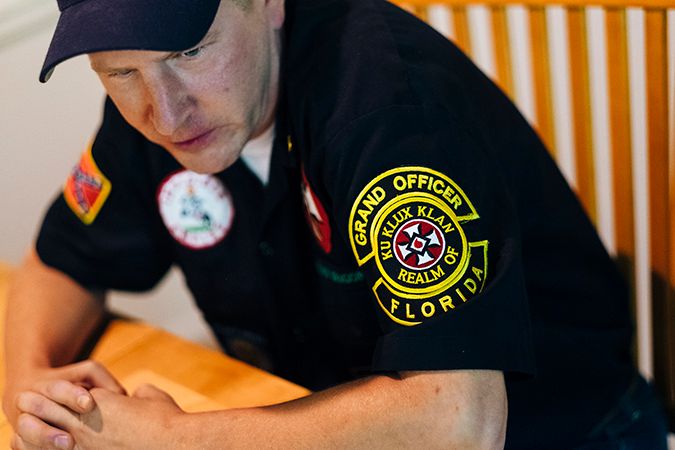 A rep from Students for a Democratic Society said because UNF failed to punish the student who mocked black students by pretending to be a monkey earlier this semester, they have "emboldened" Neo-Nazis.

"UNF set a clear line as an institution to keep students safe by creating this culture of hate," they said. "By saying you can call black people monkeys and get away with it. Because they didn't take action, people have felt emboldened to do this and take it up a notch."

Speaking to The Tab, UNF acknowledged they had seen "a threatening message and a disturbing image."

"I want to let the campus community know that we have taken immediate action based upon what we have seen," added a message from UNF President John Delaney. "The safety of our campus is a top priority. FERPA privacy laws prohibit us from indicating whether or not a student has been suspended and truly limit our ability to communicate as broadly as we would like to do." 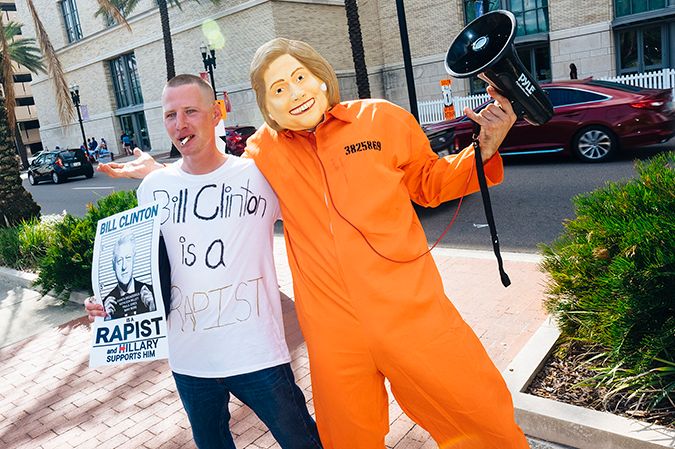 Since publishing this article, Ken Parker confirmed to The Tab that he had been suspended.

He said UNF administrators contacted him to explain his posts were "viewed as threatening" and that his actions "caused concern and fear to a number of students and faculty."

"Last time I checked, it wasn't against the law to post a picture online with a gun," Parker told The Tab. "I don't have it on campus."

He denied that he had been disciplined by the university, and said those accusing him of posing a threat were "snowflakes and they should go crawl into their safe spaces."

Parker added that he has a meeting with UNF President Delaney to appeal.