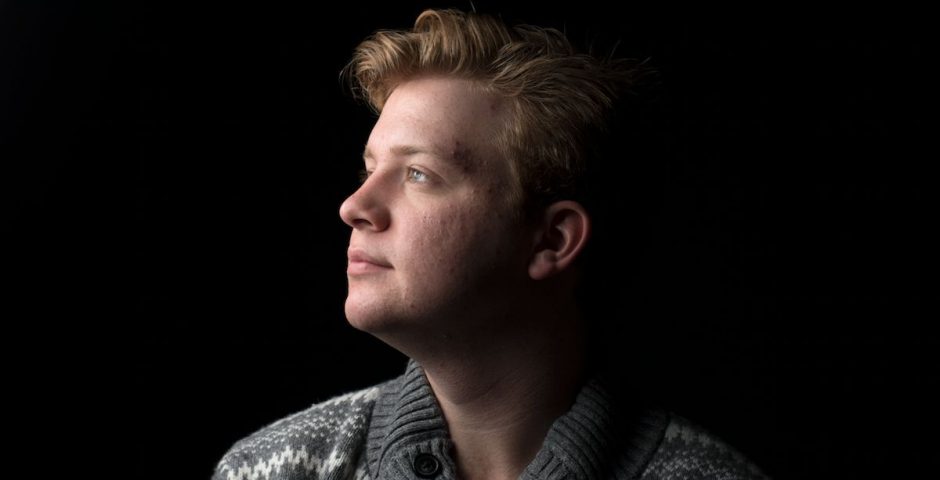 They met as junior foot soldiers in the Hillary Clinton campaign. Both were gay students at major public universities in the South.

They spoke for months about the election. It was when they met in person that things went wrong.

According to Blake Kitterman, 20, a student at the University of Tennessee in Chattanooga, when he woke up on November 12, 2016, he was being raped.

His assailant, who we are calling Ethan, was a fellow Hillary campaigner traveling back from a crucial swing state in the Midwest. He had asked Blake to stay over to break up his return trip to Alabama. He bought vodka and got Blake drunk for the first time before assaulting him.

The Tab has chosen not to identify the student by his real name as he is the subject of an active Title IX complaint against the University of Alabama at Birmingham (UAB), where he studies.

Earlier this year, the university found Ethan responsible for the assault, but this summer reversed its judgement on a technicality. They said because the assault had not taken place on campus, they could not investigate it – a policy brought in 10 days after Blake’s assault. 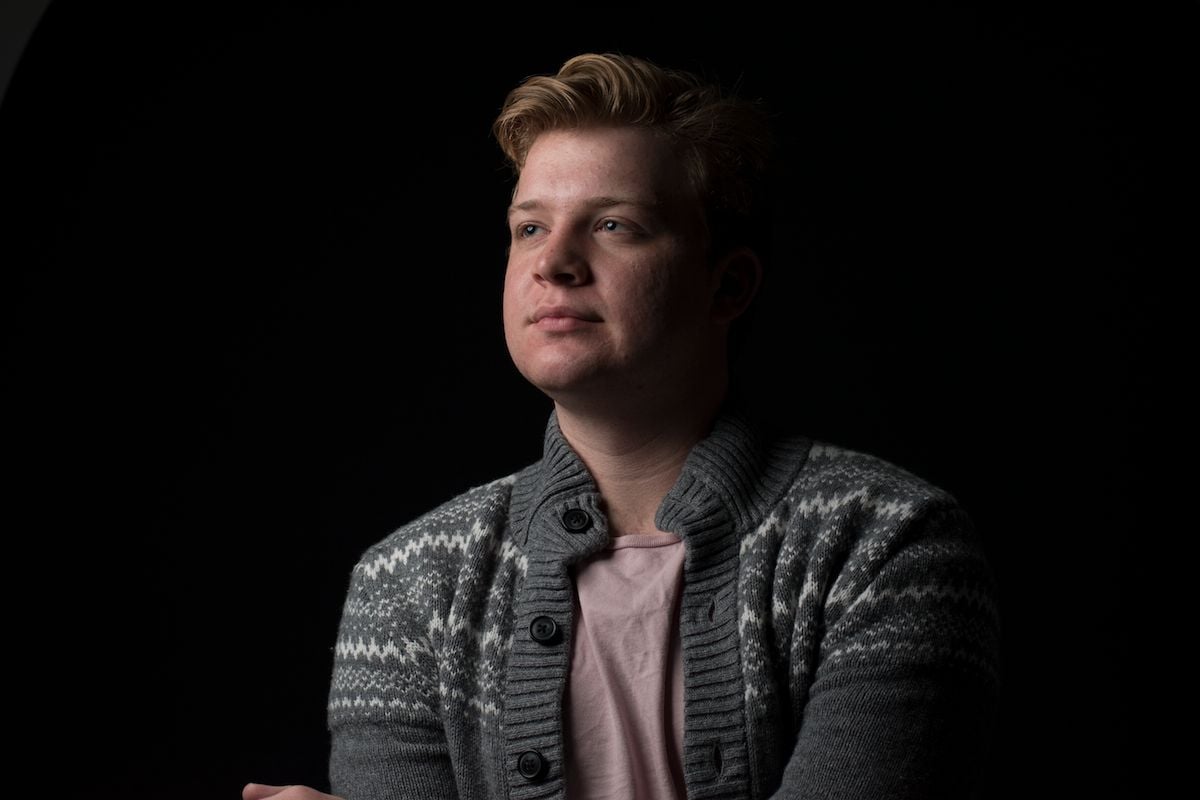 Blake added Ethan on Facebook in the summer of 2016 as he networked with young Democrats across the country, fired up for the election in November.

Ethan messaged Blake to tell him about his work on the Hillary campaign – he was going door to door in a key swing state, organizing community canvassing and get out the vote events. Within minutes of being added, he had invited Blake on a dinner date.

He apologized if that was too eager, writing: “Was that too much? I'm sorry. I'm a little over friendly.” 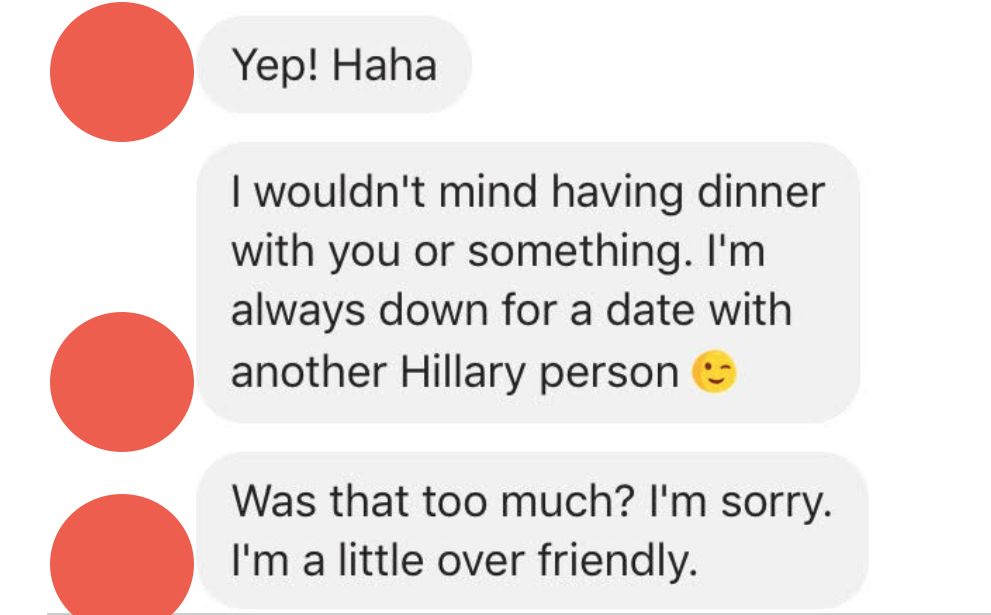 One of the Facebook messages that Ethan sent Blake

Ethan had been campaigning for Clinton in the Midwest since August. His Facebook posts attest to a busy schedule – waking up at the crack of dawn and going to bed “after midnight each evening.”

They also suggest a high-minded young Democrat. Writing in his local campaign Facebook group for the county he was working in, Ethan urged other volunteers to sign up for shifts, saying the election was something “we cannot afford to lose.” He added that the campaign needed more help “in order to rest easy on November 8!”

By the evening of November 11, with the election lost, Ethan was back in the South, visiting Blake on his way home. Ethan asked if he could break up his long journey by staying the night in Blake’s student apartment.

This was the first time they had met in person, and the alcohol for the night was provided by Ethan, who purchased two bottles of Smirnoff vodka from a local liquor store as Blake waited in the car.

They talked about the election loss and commiserated together about the impending Trump administration. Blake remembers how they spoke mostly about politics and the Hillary campaign and later on, personal talk about Ethan’s relationships.

Around 11.30pm, just after picking up the vodka, they began drinking. Blake told investigators how Ethan poured him a mixed drink, and told him not to drink water or it would “distill the alcohol” he had already consumed. Blake says over an hour later, he was drunk, confused and tired, so he crashed out on his bed to fall asleep.

“I expressed to him I was feeling dizzy and lightheaded,” Blake said. “Finally I decided I was going to go to bed. He kept brushing up against me and making moves. I thought ‘I don't really want this to happen,’ I had a boyfriend at the time. ‘If we just go to sleep,’ I thought, ‘that would be the end of it.’"

“We were going to sleep and he lay down next to me and started making moves on me. After a while of him making moves and coming onto me, he began kissing me. I went to the bathroom and hid for a while, texting my boyfriend what happened. I was incredibly drunk and I don't remember half the texts that I sent.”

Texts from that night reveal just how drunk Blake was – misspelling words, repeating himself and writing incoherently. About 40 minutes later, he returned to the room, and fell asleep in his bed, next to Ethan. 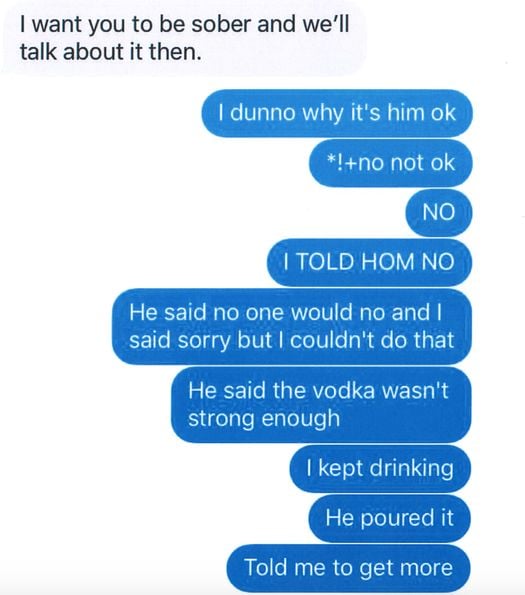 Texts Blake sent his boyfriend from the night of November 11, 2016

The next thing he knew, he was being assaulted. “On that morning on November 12, I woke up and he was on me.”

University investigators would later rule that based on the preponderance of evidence, the following events “more likely than not” happened. "I was raped," Blake told The Tab.

“Blake woke up the next morning and felt Ethan touching him ‘everywhere,’” a UAB administrator heard. Scared and unsure what to do, Blake didn’t move.

“I wish I could say that I fought him off or I got up and walked away or immediately did something,” he told The Tab. “But in that moment I felt the only thing I could do was freeze up. If I acted as though I was unconscious, there was no way he could think any of that was OK.”

Ethan continued to touch Blake, according to the report, pressing his lips up against Blake’s, despite him not responding and keeping his eyes closed.

“But Ethan did not stop,” university investigators heard. “Blake remembers that the bed creaked and Blake thought Ethan was getting out of bed, but instead Ethan started to perform oral sex on Blake. Blake then stopped pretending to be asleep and moved away from Ethan.”

“Finally I snapped out and sat quietly for a moment. He didn't say anything and I didn't say anything. I told him that I had to be somewhere within the hour. Without saying anything, he got up and left. I broke down and texted my roommate.” 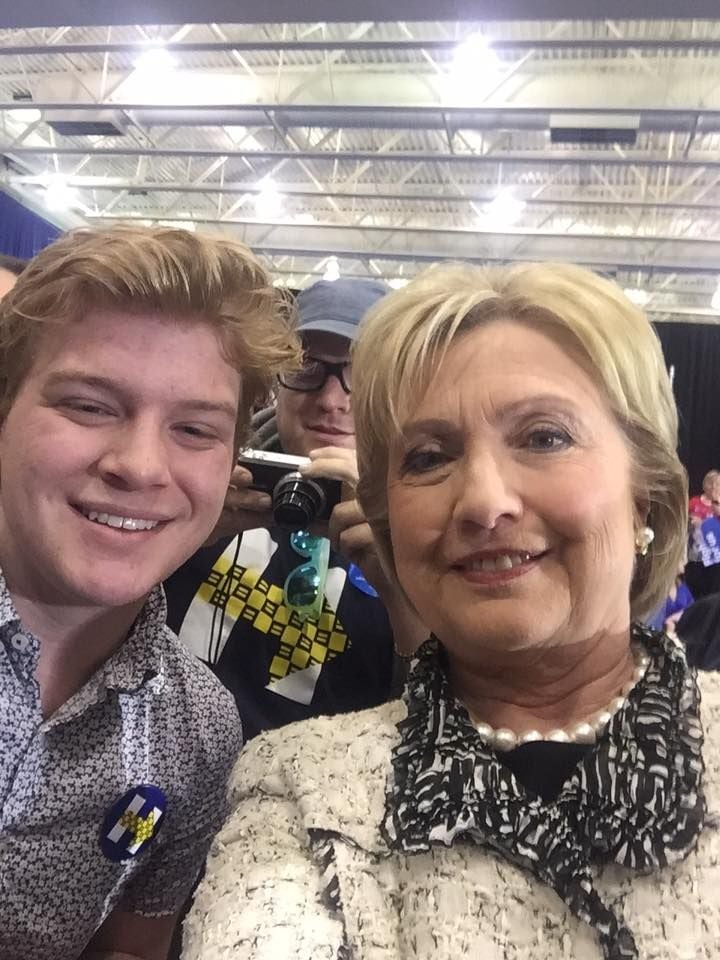 Blake reported his assault to the University of Tennessee at Chattanooga administrators and campus police that same day. With UAB, they began investigating, and told Blake in April 2017 that Ethan had been found responsible of non-consensual sexual contact, non-consensual sexual intercourse, and sexual harassment.

He was sentenced to two years’ suspension and a ban from campus.

After an ordeal that began six months before, Blake thought that would be the end of it.

“I tried not to cry,” he said, remembering the moment he heard the verdict. “When they found him responsible, it felt as there were people who listened to me, believed me and recognized the impact this had on me. After months of having to litigate every single detail – ‘you were drunk’, ‘he was another gay male’, ‘he sent you flirtatious messages’ – the floodgates opened. I cried for hours.”

But then Ethan appealed. The first hearing panel, scheduled to meet in May 2017, consisted of two Facebook friends and colleagues of Ethan – Blake protested and had the panel replaced. Ethan, for reasons which have yet to be disclosed, protested their replacements, leading to a third panel which sat at the start of June. They found Ethan responsible, again.

And yet it still wasn’t over – Ethan appealed a second time.

Then came a curt email from UAB’s Vice President of Student Affairs, John Jones. He told Blake that because of a new policy, UAB did not have jurisdiction over his case after all, and that the findings of the investigation had been “vacated”. Ethan would face no punishment. “This decision is final,” Jones wrote.

“It felt like I had been thrown away,” said Blake. “I read the letter for several minutes and thought there’s no possible way, after every single shred of evidence and every month that passed, that he would be let off like this.”

It emerged UAB had brought in a policy change 10 days after Blake’s assault – and four days after his college reported it to UAB – which prevented them from investigating off-campus crime.

In a statement to The Tab, UAB’s Title IX Coordinator Kasey Robinson said federal privacy laws prohibit her from discussing the case in detail, and told us how UAB works to “ensure an appropriate resolution to any incident.”

She did not respond to our question about UAB changing their policy to say Blake’s case no longer fell under their jurisdiction.

Since coming forward, Blake has heard from two other young Democrats, both gay men, who say Ethan sent them sexually aggressive texts and unsolicited, explicit photographs. Both confirmed their account to The Tab, but neither said they had screenshots of the messages. 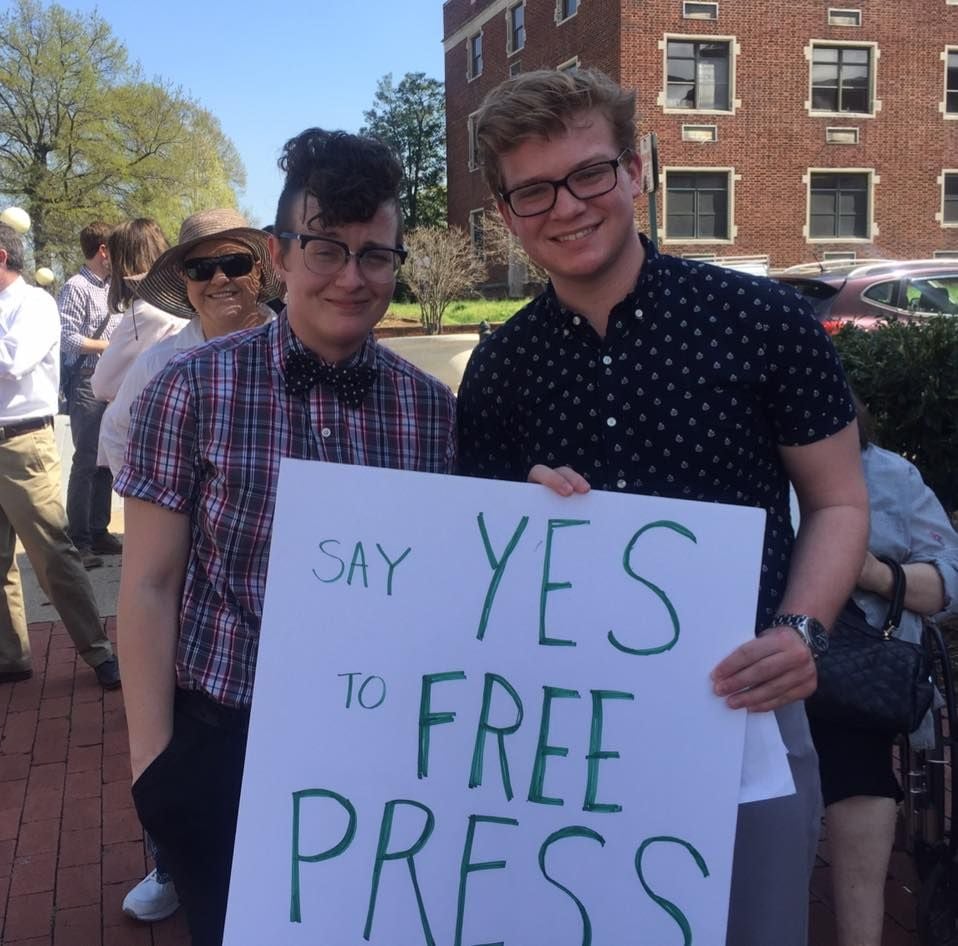 Now Blake is taking UAB to court for violating sex discrimination law, claiming the university made a “hostile environment” for their students. He has also accused UAB of denying him access to his own records – they have asked Blake to pay out of his own pocket for his case to be transcribed, and even then they said he wouldn’t be allowed to keep a copy or take photos, but only read it in a room at UAB.

Teaming up with a nationwide Title IX activist group, End Rape on Campus, he has filed his case to the Office for Civil Rights.

Speaking to The Tab, Annie Clark, the Executive Director and Co-Founder of End Rape on Campus, said:

“At least three individuals have experienced sexual harassment and/or assault by the perpetrator, and UAB has already found the perpetrator responsible for multiple counts of sexual misconduct. The fact that the school has decided to welcome this assailant back on campus after finding him responsible means that UAB is knowingly contributing to a hostile environment.

“The fact that UAB is ex-post facto applying a new policy and allowing students they found responsible for sexual misconduct back on campus is cause for explanation and concern.”

Blake explained he wants UAB to change their policy, even though he remains doubtful about seeing justice in his case.

“I thought it was never going to happen to me,” said Blake. “No matter your positions, no matter what you’re involved in on campus, you’re not immune to rape. Colleges have the ability to handle these things better. UAB had every opportunity to make sure this person wasn’t on a campus, posing a threat to other students.”

Ethan did not respond to The Tab’s repeated requests for comment.