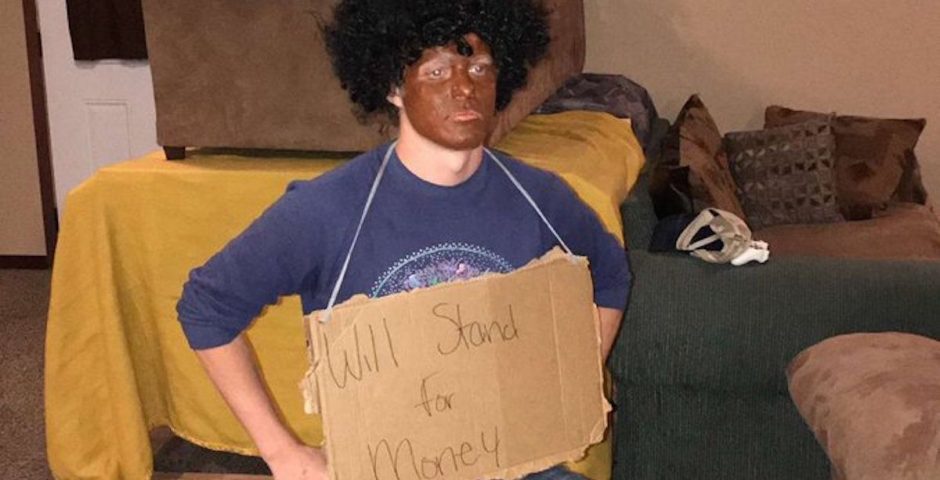 How could he not know blackface is racist?

At what point did Cole Paulson, the student who wore blackface to Halloween and pretended to be Colin Kaepernick, realize his costume was racist?

Do you think it was before or after he smeared brown paint on his face? Or when he put on an oversize black wig? Or maybe when he stepped down on one knee for a photo, with a cardboard sign around his neck that said "will stand for money"?

Because Cole, who claims to be student at South Dakota State University (a rep from the school explained he is not currently enrolled), will have you believe he only realized his costume was racist after he was exposed online.

IT'S TIME TO GET PPL KICKED OUT OF SCHOOL. FUCK THIS BULLSHIT pic.twitter.com/22OFlfHDfF

"I will be completely honest and tell you I was ignorant to the fact as to painting my face like that was racist," Cole told the Argus Leader newspaper last night. "It was in no way my intention to offend the African American community, and I have read many articles and documents since to educate myself on why it was wrong of me to do what I did."

Sure thing, Cole. He then goes on to claim that his costume wasn't that bad because he never left the house.

"I also never left the confines of my home with that paint on my face," he said, oblivious to the fact you don't need to leave your home to be an offensive dickhole.

"I was contacted almost immediately about how it was wrong and proceeded to wash it off before I went anywhere. I wholeheartedly apologize as I feel horrible about my ignorance and offending many people I respect."

Is it normal to have racist students like @32Paulson32 attend your college? Blackface in 2017 pic.twitter.com/cPldW1PWOR

I want to know how you and your friend who took this picture didn’t think this was gone be a problem before y’all posted it?? @32Paulson32 pic.twitter.com/n47aobeT1y

By now, it's really a boring cliché to say "It's [insert year] and people are still doing [insert shitty thing]." But in this instance it's hard not to think –  how is it possible that in 2017 there are still people out there who don't know that blackface is extremely racist and dumb as hell?

Surely by this point, after instances of blackface regularly appearing in the news, everyone knows the very simple lesson of "do not wear blackface because that is a racist thing to do."

Legit didn't know that was a big issue until someone sent me an article about it. I'll agree i was ignorant to the fact I was being racist.

How fucking long and how many articles need to be produced to show white people that BLACK FACE IS INHERENTLY RACIST.

In an age where people like Cole can, and probably will, be called out for racism and then exposed on the internet for millions to see, saying "I genuinely didn't know about this but now I have read the Wikipedia on blackface and understand that it's A Bad Thing" is no longer a legitimate defense.

If you're a student at university and don't know that covering yourself in black paint and pretending to be black athlete isn't racist, you're not being accidentally ignorant – you're being willfully ignorant. Sorry Cole, I call bullshit.