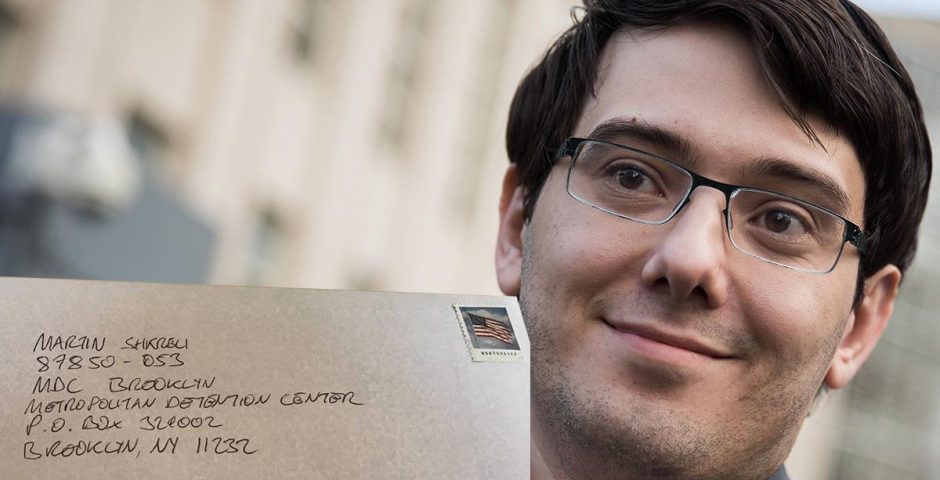 Martin Shkreli sends a jailhouse letter to The Tab: ‘Avoid this place’

‘I almost slugged someone for cutting me in the computer line’

Martin Shkreli wrote a letter to The Tab to say "avoid jail" if you can, because a college education will not help you succeed in a prison environment.

Shkreli, who is currently incarcerated in a Brooklyn jail as he awaits sentencing for securities fraud, replied to a letter we sent him to ask about how he's doing.

MDC Brooklyn, known for housing terrorists and mafia bosses, has a reputation for its "unspeakably harsh conditions."

But Shkreli, 34, told us: "Jail has some redeeming qualities. It's probably the most social environment I've been in."

He explains: "It has this feature where inmates are necessarily bonded by common purpose. Sometimes it backfires, but there is camaraderie akin to a military setting. You learn just how lucky you are, you help others out, learn cool slang, watch BET all day. Great times!" 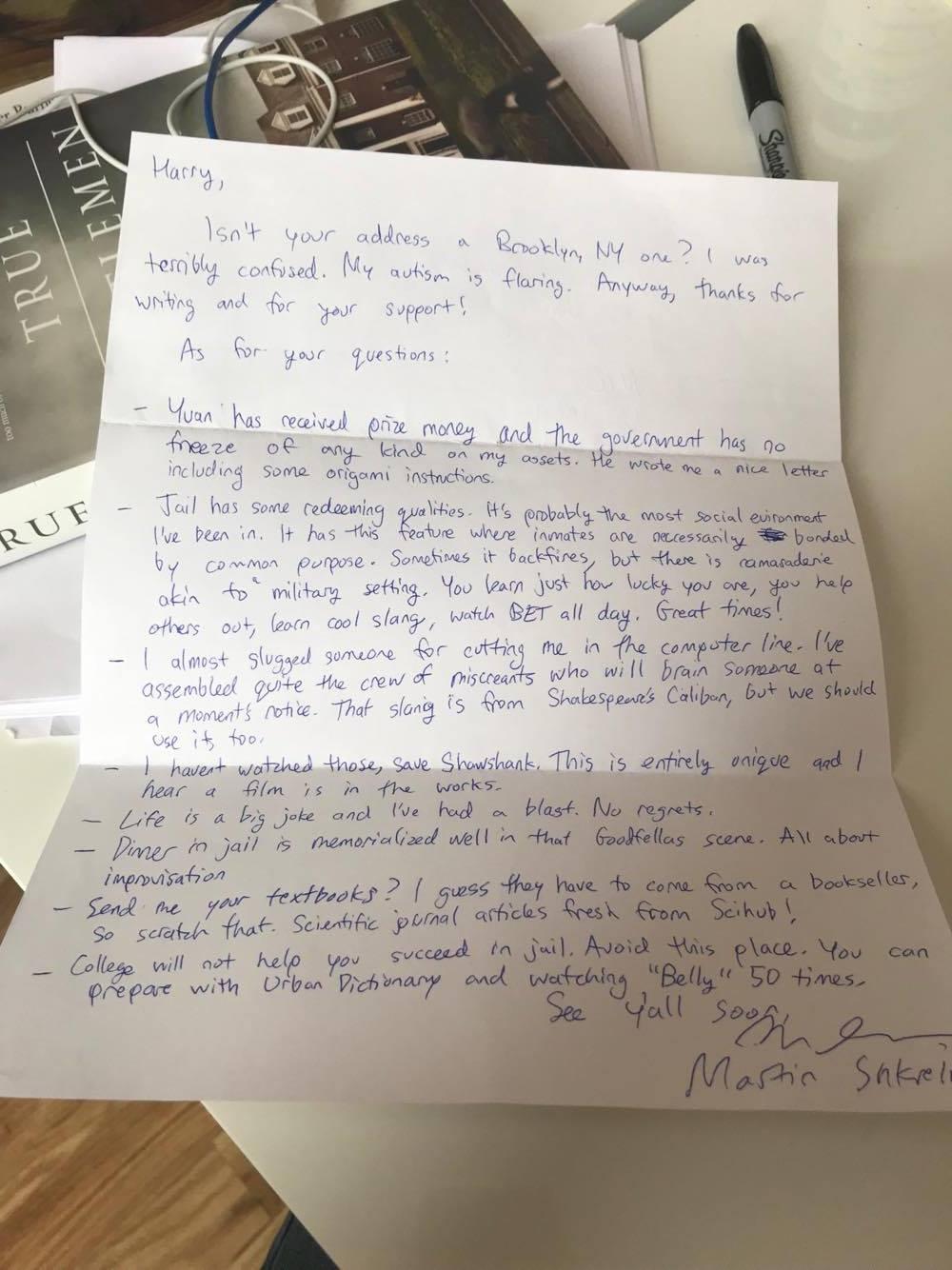 The letter Martin Shkreli sent us

When the Pharma Bro was jailed for violating the terms of his bail (he offered his followers $5,000 for a strand of Hillary Clinton’s hair, so a judge locked him up), many assumed he would be in for a rough time. After all, he spent most of his time before jail on the internet, posting shit in college meme groups and livestreaming alone in his apartment for hours at a time.

So we asked him if he had to throw any hands, to which he said:

"I almost slugged someone for cutting me in the computer line. I've assembled quite the crew of miscreants who will brain someone at a moment's notice. That slang is from Shakespeare's Caliban, but we should use it too."

(My guess is he means this bit from The Tempest, but if you have a better idea please lmk.) 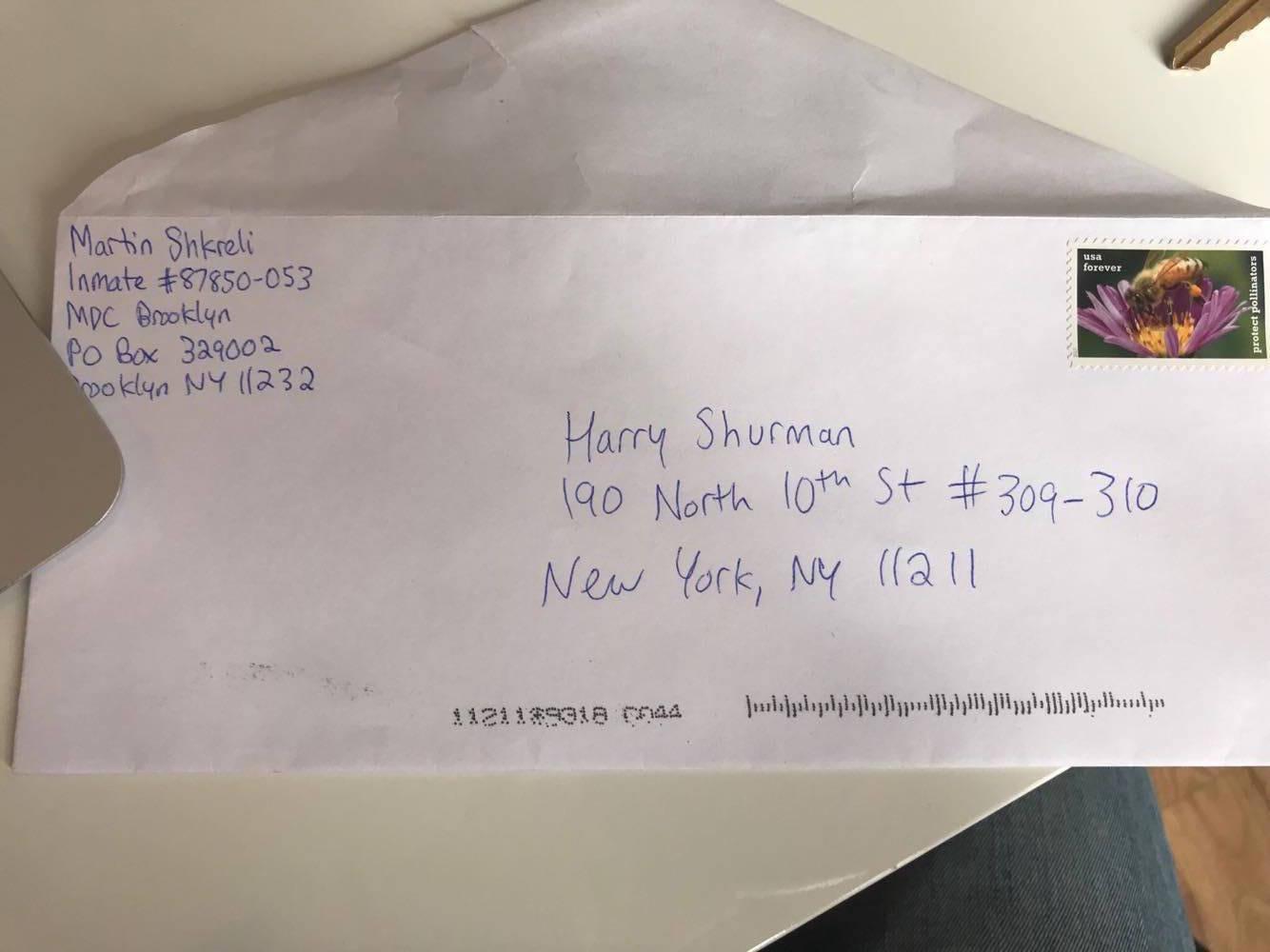 He spelled my name wrong ffs

We questioned Shkreli, who is a former student of Baruch (but claimed to investors that he went to Columbia), if his time in college helped him in any way for being in jail.

"College will not help you succeed in jail," he told us. "Avoid this place. You can prepare with Urban Dictionary and watching 'Belly' 50 times."

In crowdsourcing questions for Shkreli, we were asked to find out about Yuan Wang, the Princeton student who won $40,000 from him for solving a geometry proof during a guest lecture. We had heard that Shkreli had yet to send Wang his winnings because the government had frozen his assets.

"Yuan has received prize money," Shkreli confirmed, "and the government has no freeze of any kind on my assets. He wrote me a nice letter including some origami instructions." 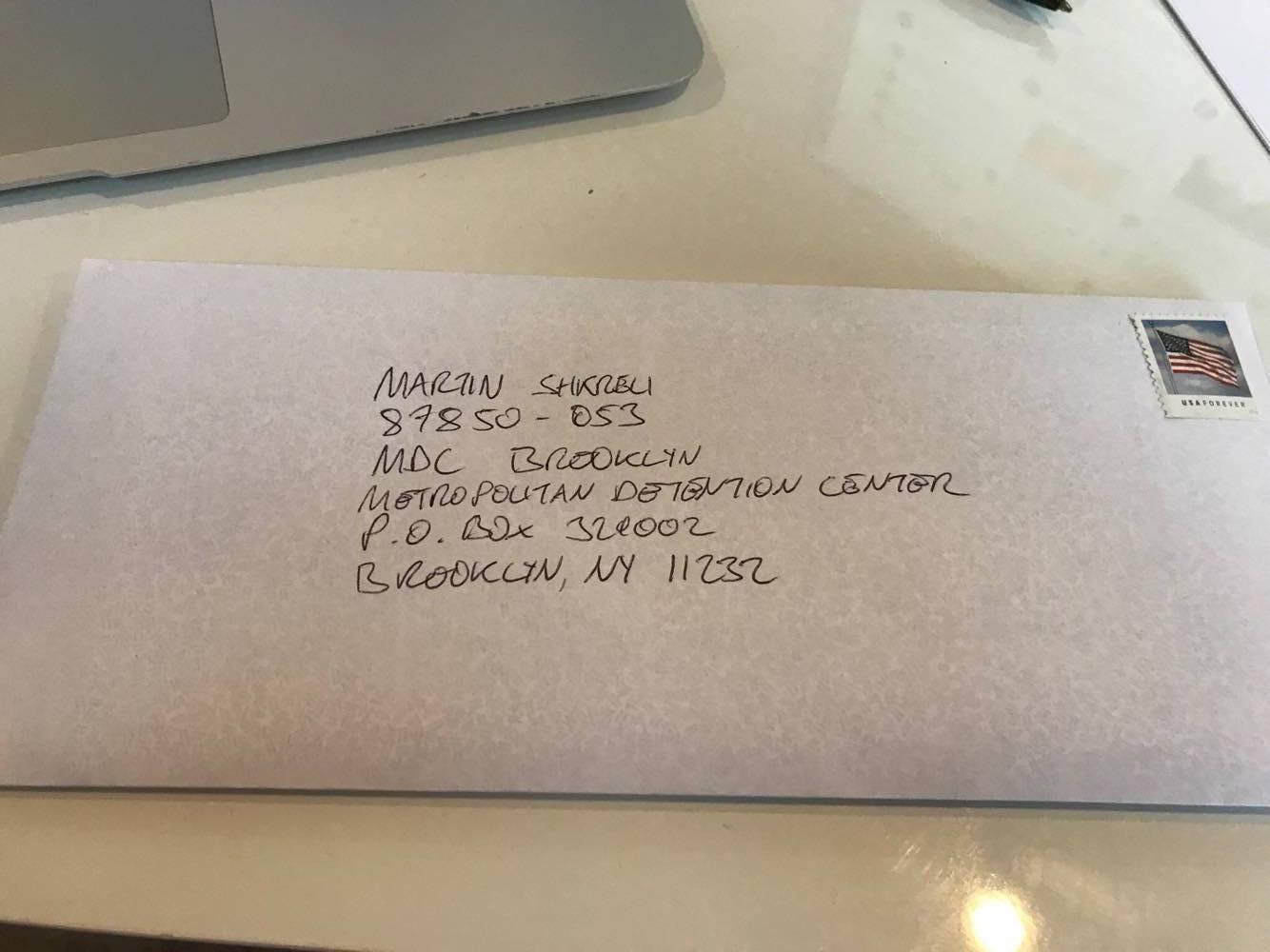 The letter we sent him a couple weeks back

When asked which fictional prison experience most closely resembled his own, Orange Is The New Black, The Night Of, or The Shawshank Redemption, he wrote:

"I haven't watch those, save Shawshank. This is entirely unique and I hear a film is in the works."

On the subject of prison movies, we asked if dinner was anything like that famous scene in Goodfellas.

"Dinner in jail is memorialized well in that Goodfellas scene. All about improvisation."

And would he do it all again?

"Life is a big joke and I've had a blast. No regrets."

Shkreli faces sentencing this January for three of his eight charges relating to fraud and was acquitted of the other five. He faces a max sentence of 20 years in prison, but is likely to receive a less severe punishment.

If you want to send a letter to Shkreli, his address is:

"Send me your textbooks? I guess they have to come from a bookseller, so scratch that. Scientific journal articles fresh from Scihub!"