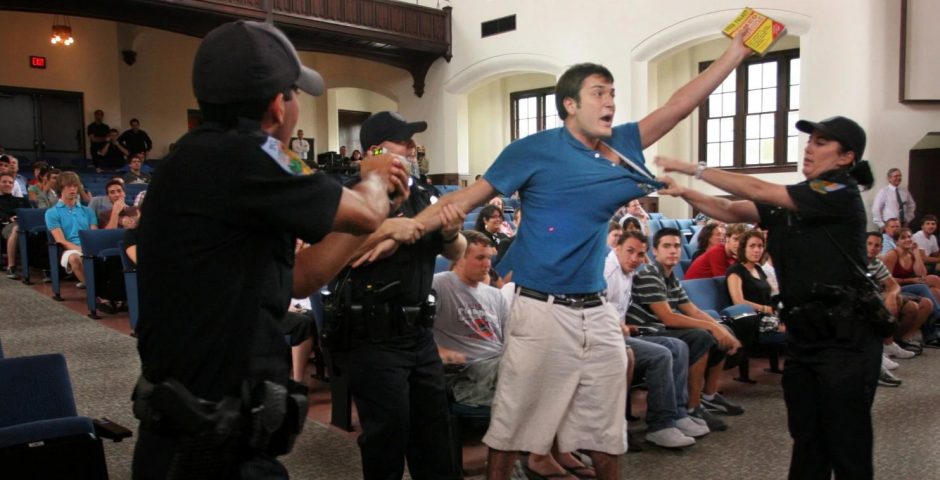 Whatever happened to the ‘Don’t Tase Me Bro’ guy?

It’s been 10 years since he first went viral

On the day he was tased, Andrew Meyer could never have predicted that he would become a viral sensation, but "don't tase me bro!" became a cry heard around the world.

A decade in internet years amounts to several lifetimes – countless shares of innumerable items of digital content; success kids growing up to become naïve college freshmen, then aging into sad papaws. So 10 years on, what became of Andrew Meyer? 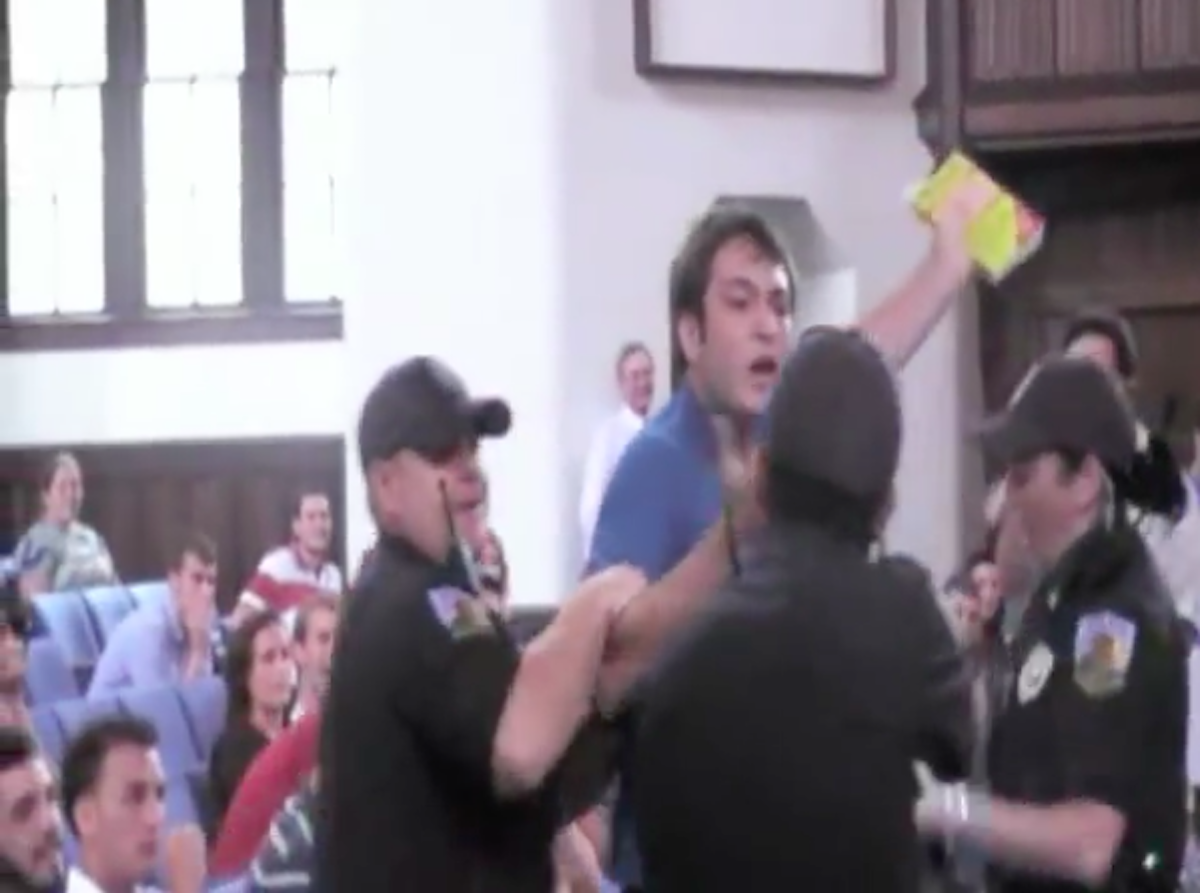 To understand what he is now, it's worth rewinding to 2007.

Watch the original Don't Tase Me Bro clip above, which Andrew sent to me, and you'll be disturbed by how violent it is. The video is brutal – it's something that doesn't match up with the memes, song lyrics, cartoon references and comic book gags that it inspired.

The incident begins when Andrew, a student at UF attending Senator John Kerry's talk, steps up to the mic during the Q&A session. A reporter at the time dismissed his questions about Kerry conceding the 2004 election, Iran and Yale's Skull and Bones Society as "an increasingly agitated three-parter" that made no sense. But compared to 2017's Pizzagate, revisionist history of the Zodiac Killer and flat earth trutherism, it's tame stuff.

That still didn't stop campus police from cutting off his mic and hauling him away mid-speech. "Get off me!" Andrew shouts. "What the fuck are you doing! Help! Help! Help!" There's a wild struggle and before long, five officers have him handcuffed on the ground.

"Put your hands behind your back!" the officers shout, as John Kerry can be heard off-camera and on-stage, not trying too hard to intervene. The fight continues as Andrew yells: "Get off me, man! I didn't do anything! Don't tase me bro! Don't tase me!"

The police ignore him and one of them uses their Taser. You can hear the tick tick tick noise of the weapon in action, and Andrew starts screaming. It's agonizing to watch.

"I don't go out of my way to watch it, but it comes up sometimes," Andrew told reporters a few years ago. "Every time I see it, it’s still painful. People talk about the Taser as if it were nothing. Maybe some people have been tased, and they didn’t feel it. When I felt it, it was excruciating."

By zeroing in on the phrase "don't tase me bro" and ignoring its context, the memes sanitized the incident and it became funny. It then spawned what passed for viral content in 2007. Remember these? 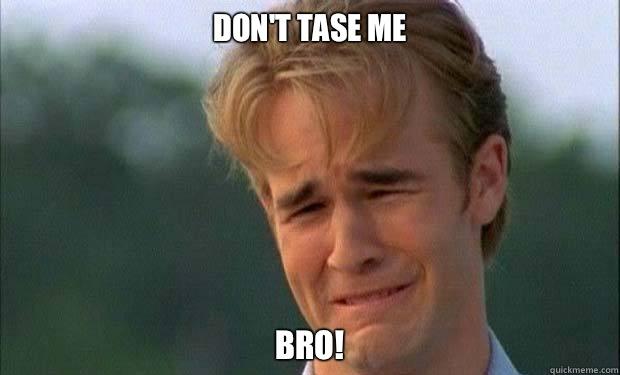 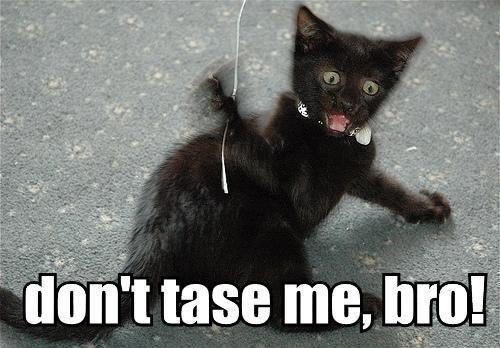 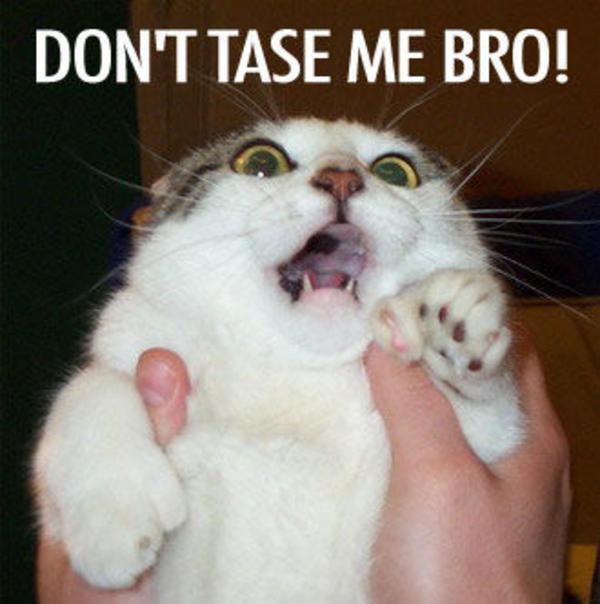 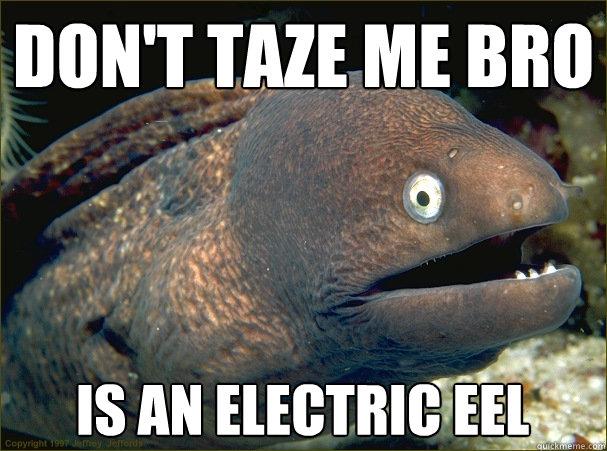 It's worth pausing at this point to reflect on the saccharine wasteland that was Being Online in 2007. The barrier for funny seems higher now. 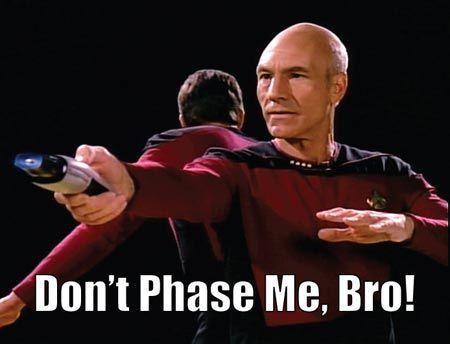 Andrew was arrested for inciting a riot and charged with disturbing the peace and resisting an officer. He spent the night in jail and agreed to a period of probation in exchange for the charges being dropped. Two officers involved were placed on paid leave.

Kerry would later make a cack-handed statement that pre-empted Trump's "all-sides" response to Charlottesville, and claimed to not know that Andrew shouting "don't tase me bro" didn't refer to being tased, bro:

"I was not aware that a Taser was used until after I left the building. I hope that neither the student nor any of the police were injured. I regret enormously that a good healthy discussion was interrupted."

After finishing his time at UF, Andrew went on to law school and then different projects – among them, a media blog called Photography Is Not A Crime and his own site. 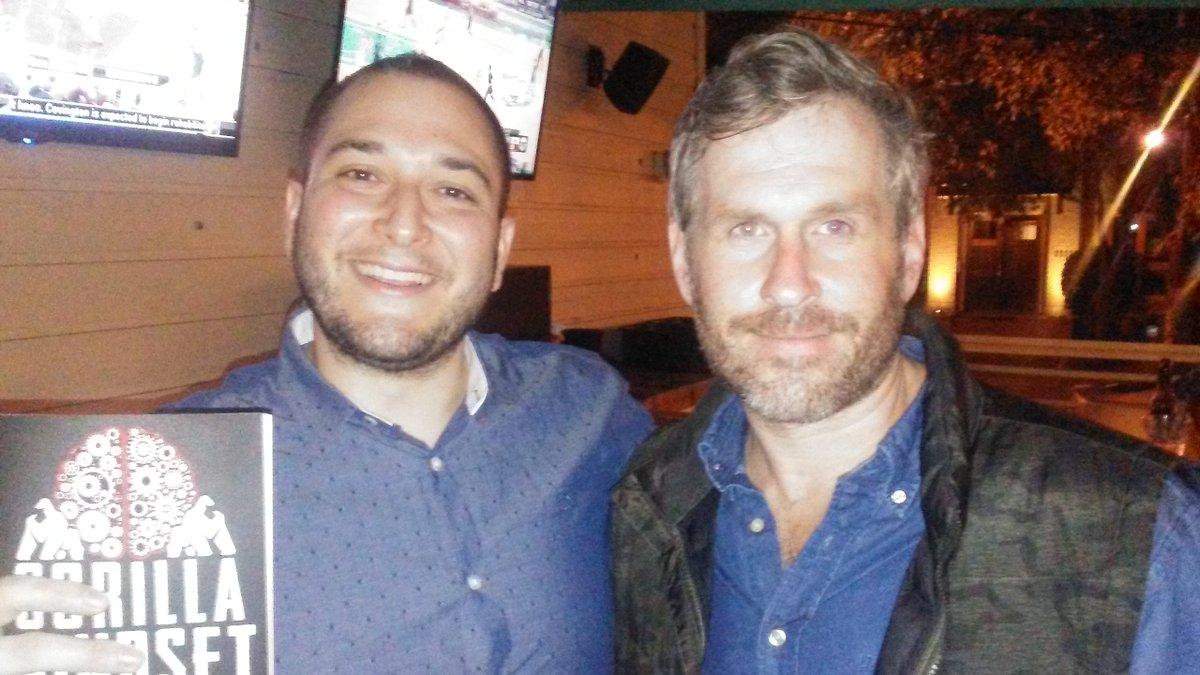 If you've heard of Cernovich – a professional livestreamer – it could be from him peddling Pizzagate, from appearing on Infowars or from calling his detractors pedophiles online. He's also known for having a huge following of the sort of MAGA ultras who think Benghazi, George Soros and chemtrails are the cause of the world's problems.

In a brief interview with The Tab, Meyer said: "My political views are similar to my views in 2007 – I want peace in the world and prosecution for criminals in Wall Street and the military industrial complex."

Now he writes for cernovich.com about stories with breathless headlines like:

Journalist Asks Hillary Clinton “What Happened” to Her Emails

"Would you trust Goldman Sachs to deliver your morning news with no bias?" he told us. "And yet, millions of Americans have been doing exactly that, reading 'news' like the New York Times that is owned by Wall Street consortiums. The same people that caused the financial collapse in 2008 are telling people how to think about the news, while politicians on both sides of the aisle cater to bankers that rigged the system and set Americans up to fail." 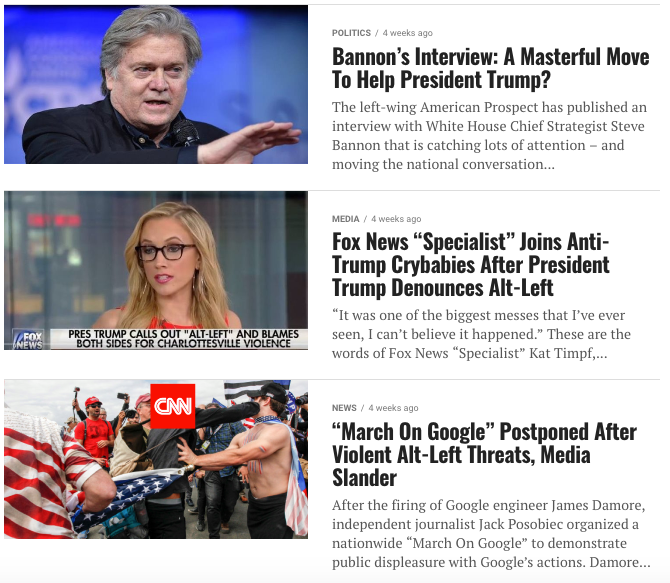 Meyer refused to answer questions about how the tasing incident changed me, or the celebrity he found as Don't Tase Me Bro guy.

But if there was ever a moment to radicalize you from a student holding John Kerry to account with a gag question to writing bilge about DNC murder conspiracies and billionaire pederasts, it would be getting held down and tased by a mob of officers in front of your peers.

Still, he told us: "If I could change one thing in the U.S., it would be how we talk to each other. People should treat each other with human dignity and earnestly seek the truth, rather than defend their point of view as if it were their home football team and they can never be mistaken.

"I encourage people to follow me on Twitter @TheAndrewMeyer. I've been working behind the scenes with some famous journalists on a project you won't want to miss."

He ended with a quote from Joseph Stalin, of all people.

Then he stopped answering our messages.