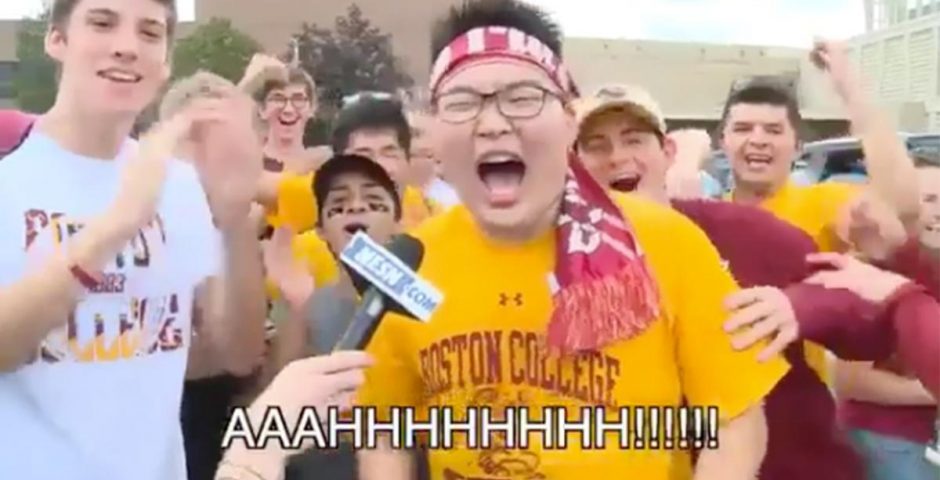 Meet Young Seok Kim, the tailgate hero we do not deserve

We must protect him at all costs

You may have seen a viral video over the weekend. It contained an off-camera reporter asking a Boston College freshman about his tailgate technique. A seemingly mundane piece of video that happens hundreds of times a week. But in this simple, short exchange with an NESN reporter, Mr. Young Seok Kim changed the game.

We don't know a lot about Young Seok. What we do know is that he's a BC freshman. He doesn't know what a Demon Deacon is. He loves tailgating. He believes in the importance of staying hydrated. He will get super hyped up in exchange for a BC cap. He has a big head.

Based on this, we can assume a few things. Based on his enthuiasm, energy and pure joie de vivre, we can tell that he's not like many other students at the straight-laced, buttoned up Boston College. In fact he may well be the most college person that the Jesuits at BC have ever seen.

I don't care that he doesn't know what a Demon Deacon is, it sounds stupid. I respect the fact that when asked about his tailgating style, he doesn't have the words to describe the pure power of what he brings to the table. He tries, but words fail him. He begins, he starts to form a sentence, but the energy, the pure raw mastery of the tailgate comes out as the crowd swarms around him.

Young Seok also has a magnificent emotional range, from pure excitement to child-like glee when he is gifted the precious BC hat. His eyes light up, he proudly displays his prize to his subjects. It's a glorious moment.

I reached out to Young Seok for this article, but at the time of writing he hasn't replied, presumably busy dealing with his new found fame. Wherever you are Young Seok, whatever you're doing, I salute you sir.