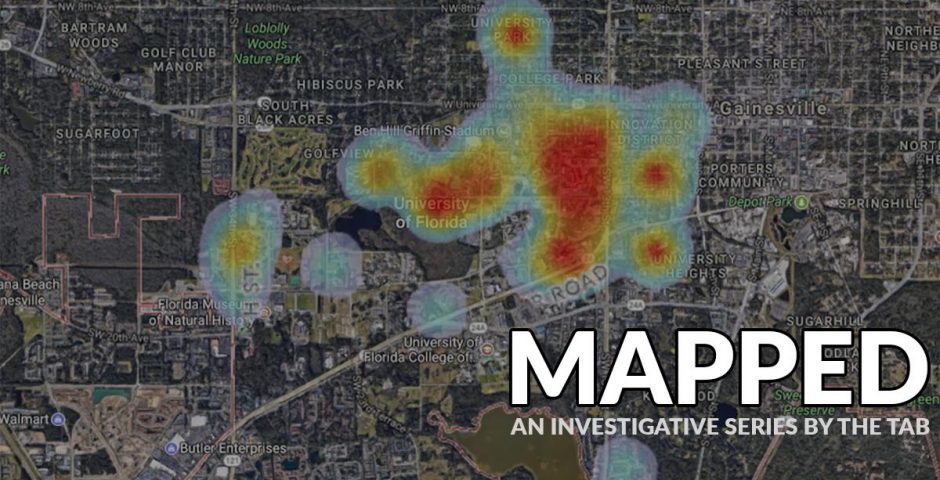 Freshman dorms are the epicenter of campus sex crimes, according to a new analysis of reported rapes and other incidents.

Just under half of all sexual assaults reported on campus take place in freshman housing, ahead of Greek life premises and other on-campus locations.

The detail emerged as a part of Mapped, the first project to analyze where reported sexual assaults and other crimes occur across a range of college campuses. It was undertaken by Tab reporters across the country to give students a better understanding of sexual assault at their schools.

By accessing publicly available crime logs from campus police, we logged over 800 reports of rape and sexual assault at Arizona State, Auburn, Cornell, Georgia Tech, Florida State, JMU, Ohio State, Princeton, UMich, UVA, the University of Florida and Virginia Tech. In the coming months, we will be extending the Mapped project by demanding data for more campuses.

A striking detail from our analysis is the number of incidents reported from freshman dorms, accounting for 46.9 percent of reports. The data about freshman dorms is based on a subset of five schools where the campus police identified the specific type of dorm where offenses were reported. 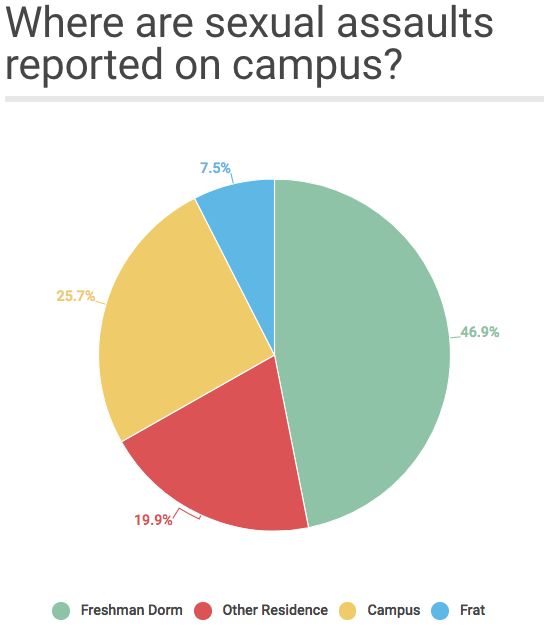 A fifth of reports come from upperclassman dorms or dorms that are not specifically for freshmen, while a quarter of reports come from inside campus buildings or outside them. Of the schools we looked into, Ohio State has the highest percentage of sexual assaults and rapes reported from freshman dorms, at 55 percent.

Sexual assault awareness campaigner Grace Breitenfeld said: "It's important for people to be aware of these statistics. If colleges were open about releasing this data, those numbers might start going down. How can you prevent a problem if you don't know it exists?"

Because the data all comes from campus police departments, it is hard to discern what the rates of sexual assault reports are like around fraternities and sororities, which are sometimes off-campus. In our research, fraternities make up 7.5 percent of incidents reported on campus. Sororities account for a negligible number of reports.

There are, however, schools we examined where the percentage of incidents reported at frats was noticeably high. Nearly half of all reports of sexual assault at Georgia Tech came from fraternities and a quarter at the University of Florida.

Mapped provides an unusual insight into the dynamics of campus sexual assault, but at this stage it represents a small sample of schools. Bear in mind that many sexual assaults go unreported and that some are reported to other law enforcement authorities.

Some campus police departments also refuse to provide the full details of some reports, which means not every crime can be broken down by location or date. In those cases, our teams are pushing for disclosure via the Freedom of Information Act.

One surprising outcome of our research came at UVA, UF, Ohio State and the University of Michigan, where police reports frequently note the local hospital as the location of sexual assault and rape. For example, at UVA, they account for 28 percent of all reported incidents, at UMich, 36 percent and at UF, 31 percent.

We contacted each of the hospitals to ask if this was because sexual assaults were actually taking place there, or if the crimes were merely reported to police from the hospital. The response was neither.

UVA told us the majority of incidents reported from their hospital were either patients receiving mental health treatment or patients waking up from anesthesia.

A spokesperson there said: “Many of these calls are reported by consumers of mental health care. UPD always responds, interviews complainants, files reports and investigate the offenses reported. Many reports could be generated by remembering past events while undergoing treatment in our facility.

“We have also received calls of past sexual assaults when patients are coming out of anesthesia from a procedure and are unable to recall or are unclear what medical procedure they underwent, and confuse the physical contact with health care providers as inappropriate contact." 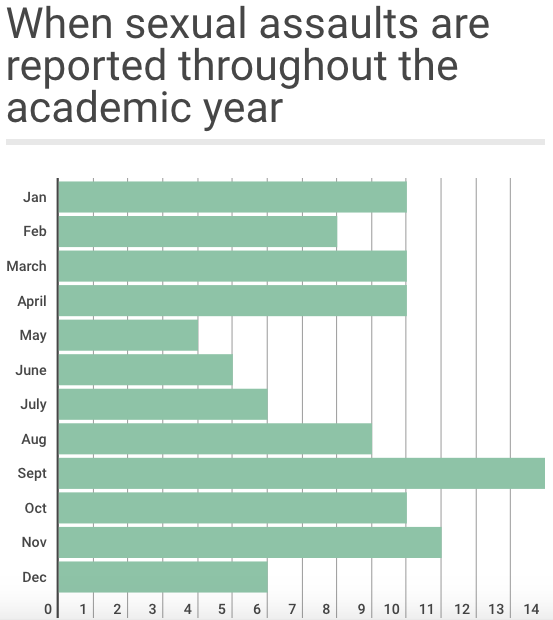 The data shows sexual assaults being reported fairly evenly through the year, with no surprising spikes in any given month.

Of the variation that does exist, September emerges as the month with the most reports, accounting for 14 percent. In general terms the data supports the existence of what some have called the "Red Zone" – the period early on in the fall semester when students are at greater risk of being sexually assaulted. The first three months of the semester in the run up to Thanksgiving add up to over 32 percent of the year's reports.

Assaults are more likely to be reported on the weekend, with 58 percent of reports referring to incidents committed in the period between Friday and Sunday.

View our reports for this series so far at: 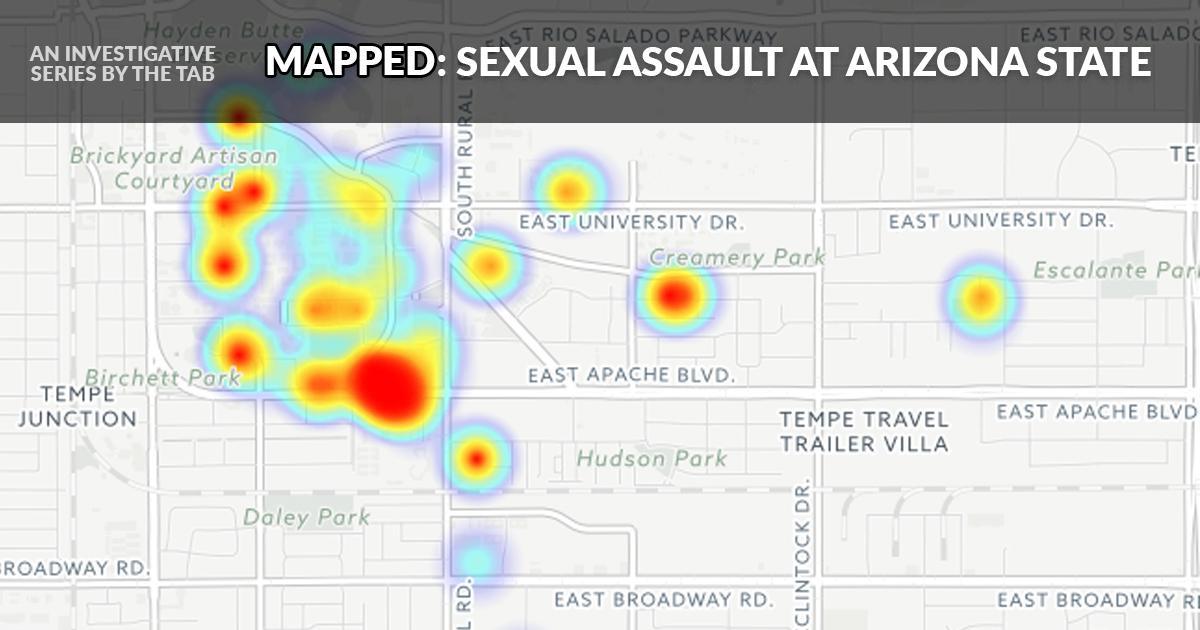 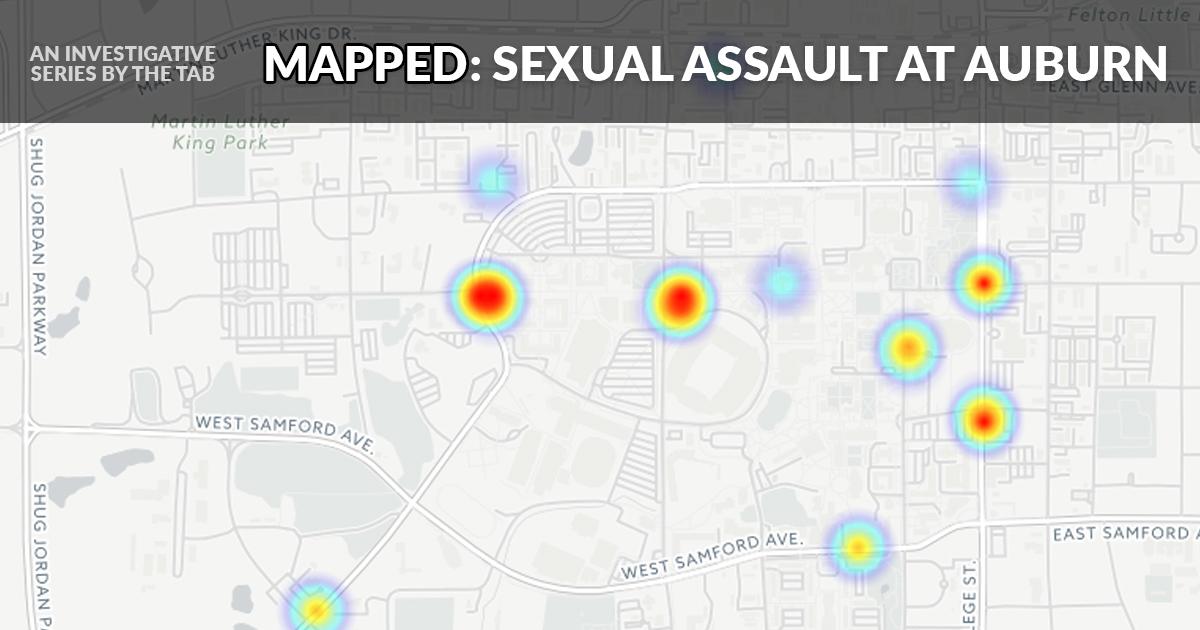 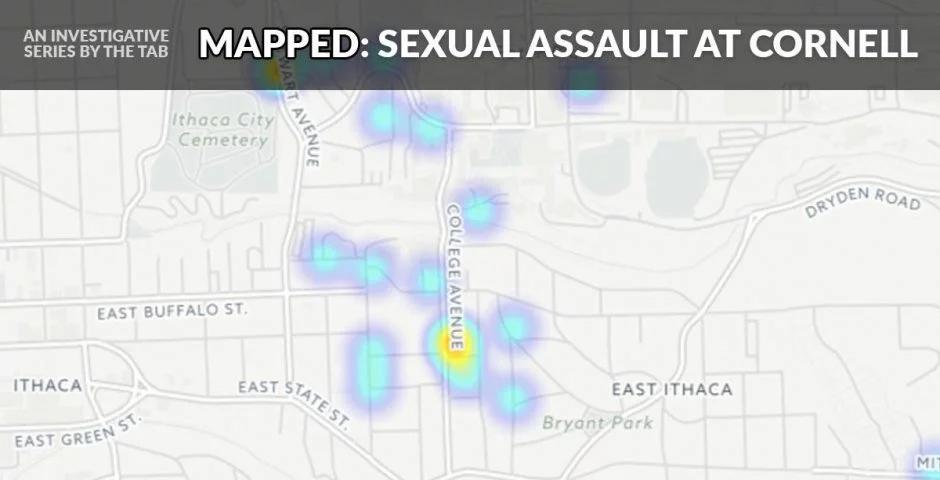 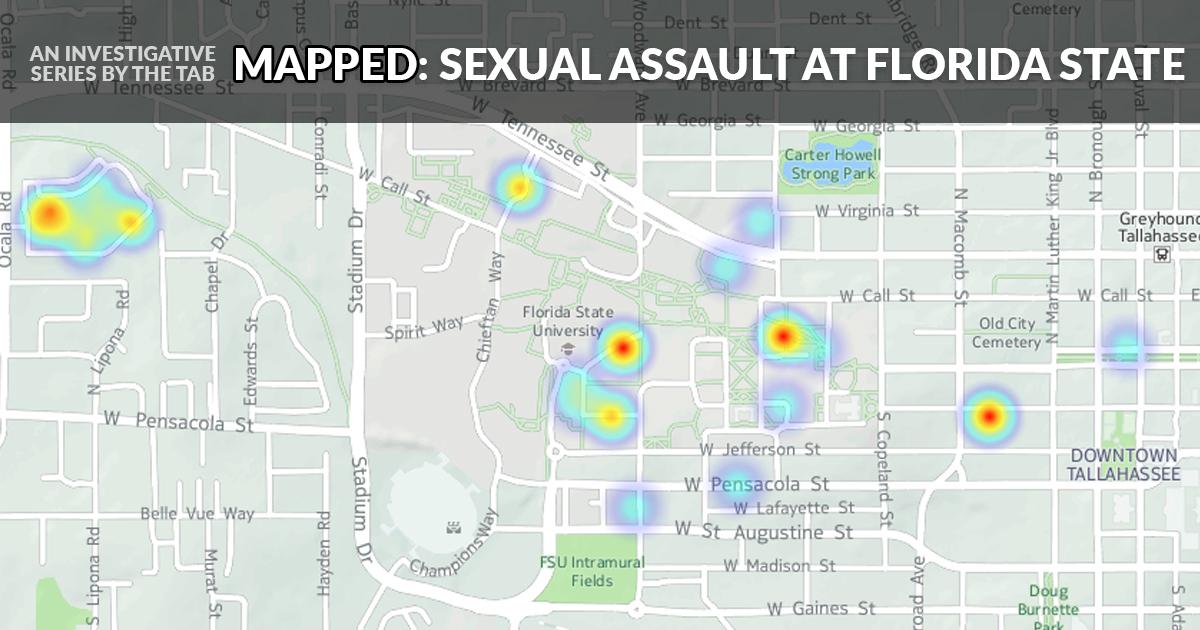 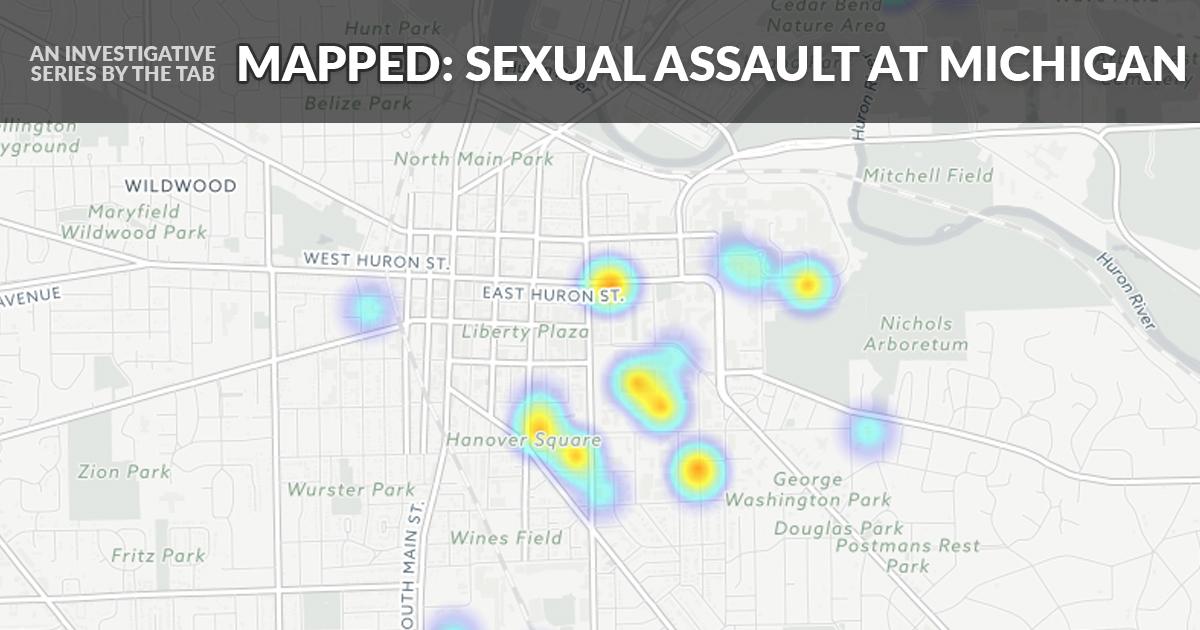 The University of Florida 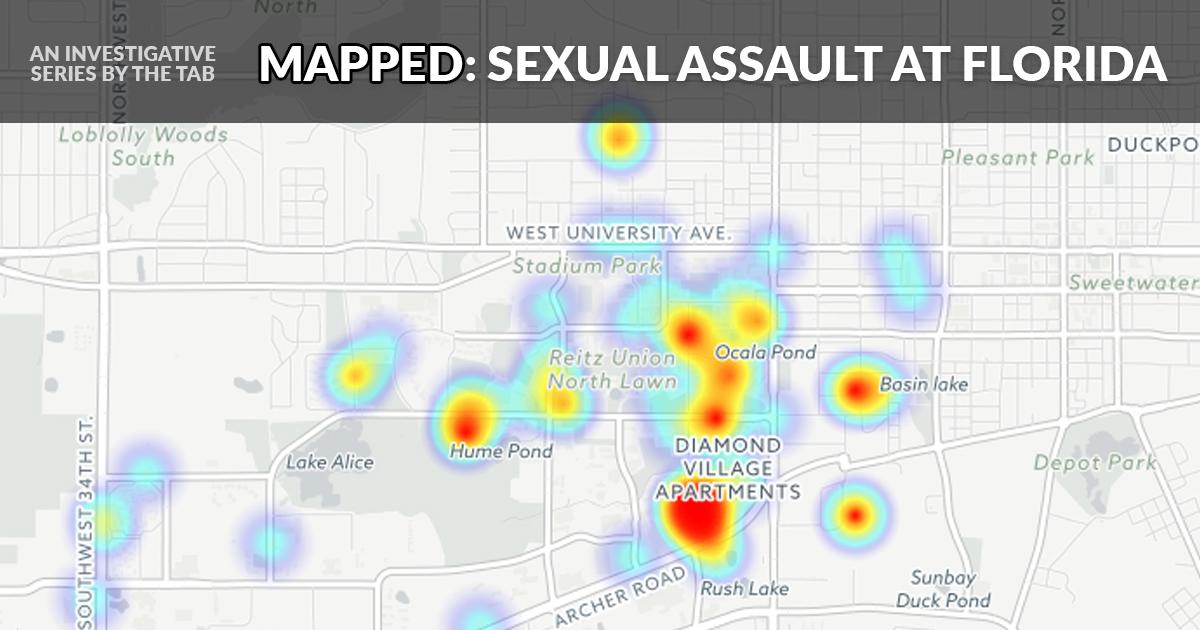 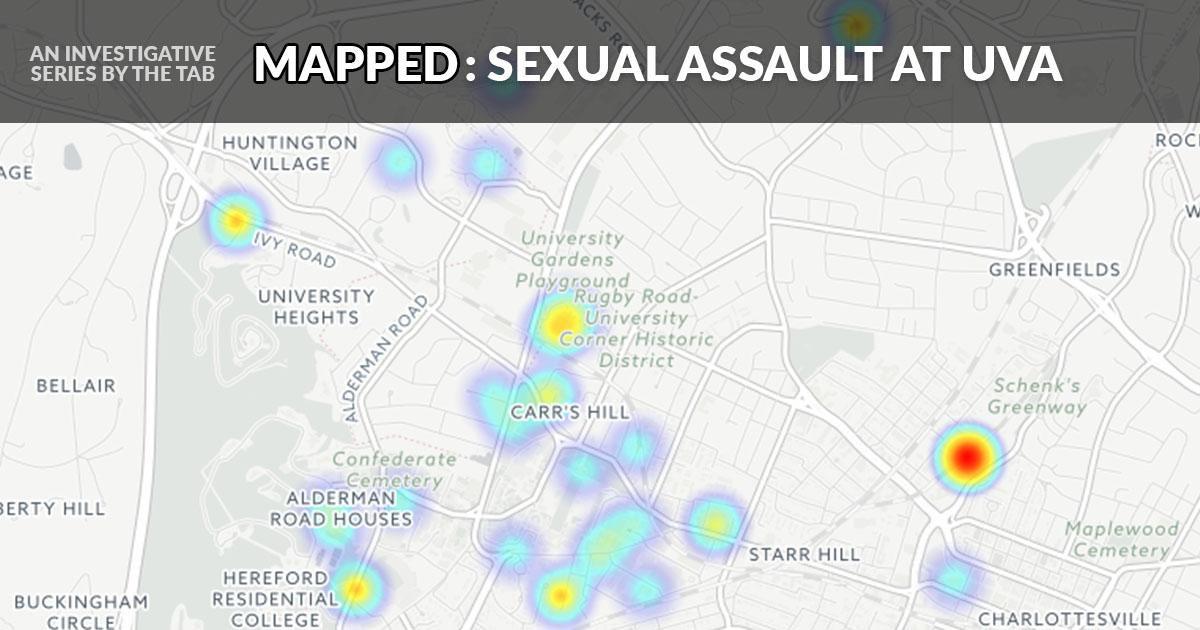 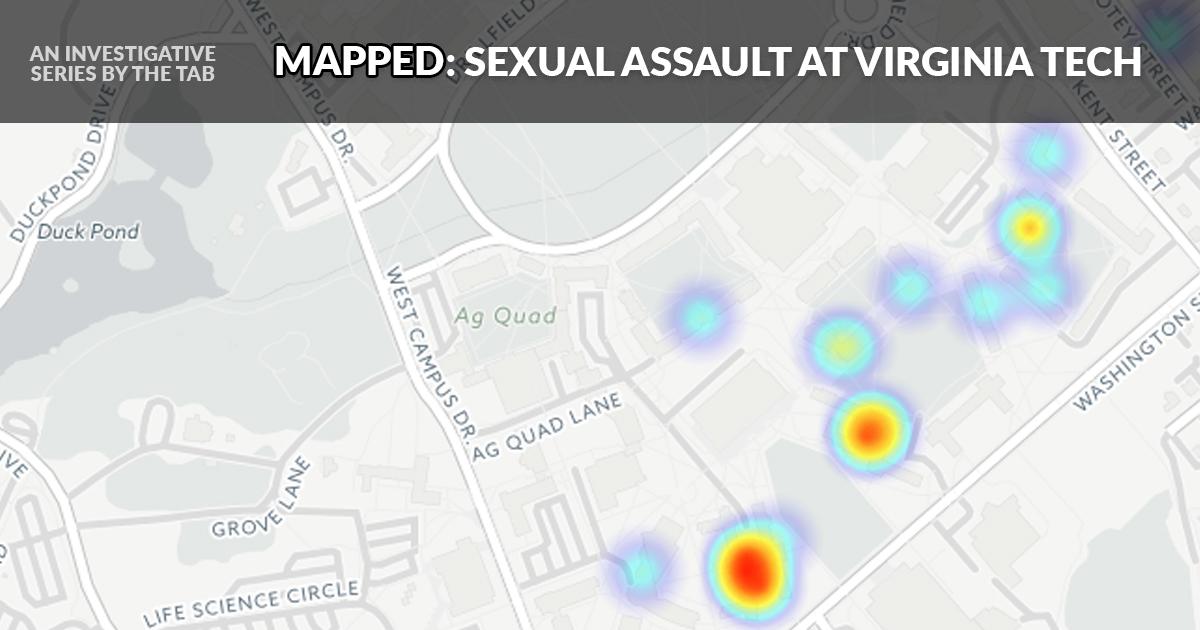