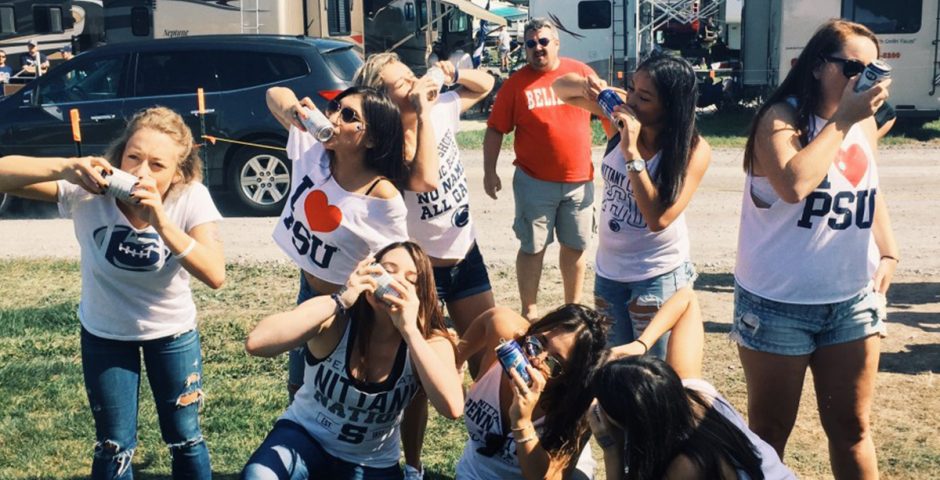 Everything to expect on game day at a Big Ten school

Sleep is for the weak, so are chasers

Game days are an essential part of the college experience and no one does it better than the Big Ten. From cracking open your first beer before the sun is even up to trying not to fall into the trap of the post-game nap, here’s everything you’ll experience before, during and after a big game in the Big Ten.

You can expect to not only be getting up at the crack ass of dawn but to loud house music and a beer to chase down (read: shotgun) your eggs with. You can’t be bothered to get to your 9am on time or even show up for your 8am, but this isn’t school, this is football, and there’s no way you’re wasting any time getting to the fields.

It’s 8am, your mouth is dry and still tastes of toothpaste. You can’t face shots yet, it’s too early. If you go too hard too fast, you’ll pass out and not even make the game. You start with beer, maybe power through a shotgun and you think it’s all gonna be fine. But then someone comes through with a handle of Svedka and before you know it, you’re two or three deep and the chances of you making it past 1pm have dropped through the floor. 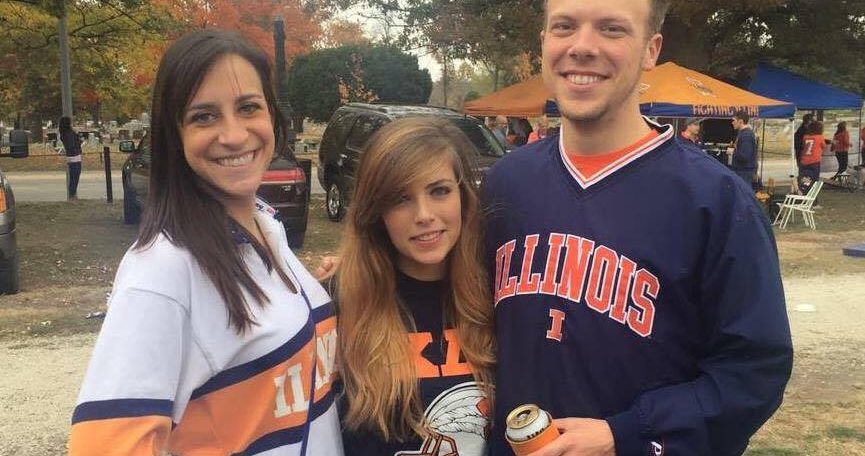 Only on game day can you get away with that sort of fashion that is no longer socially acceptable literally the day you walk across that stage and get your diploma. From jerseys that have definitely not been washed recently enough for the guys to oversized tshirts used as an excuse for a dress for girls, it’s all about looking just spirited enough and pretending you didn’t go out to the bookstore that morning to grab a shirt. And of course there’s nothing better than the face tattoos you’ll don made of some sort of adhesive engineered by NASA no doubt that will remain on your face through Sunday after multiple scrubbings and leave a super attractive tan line. 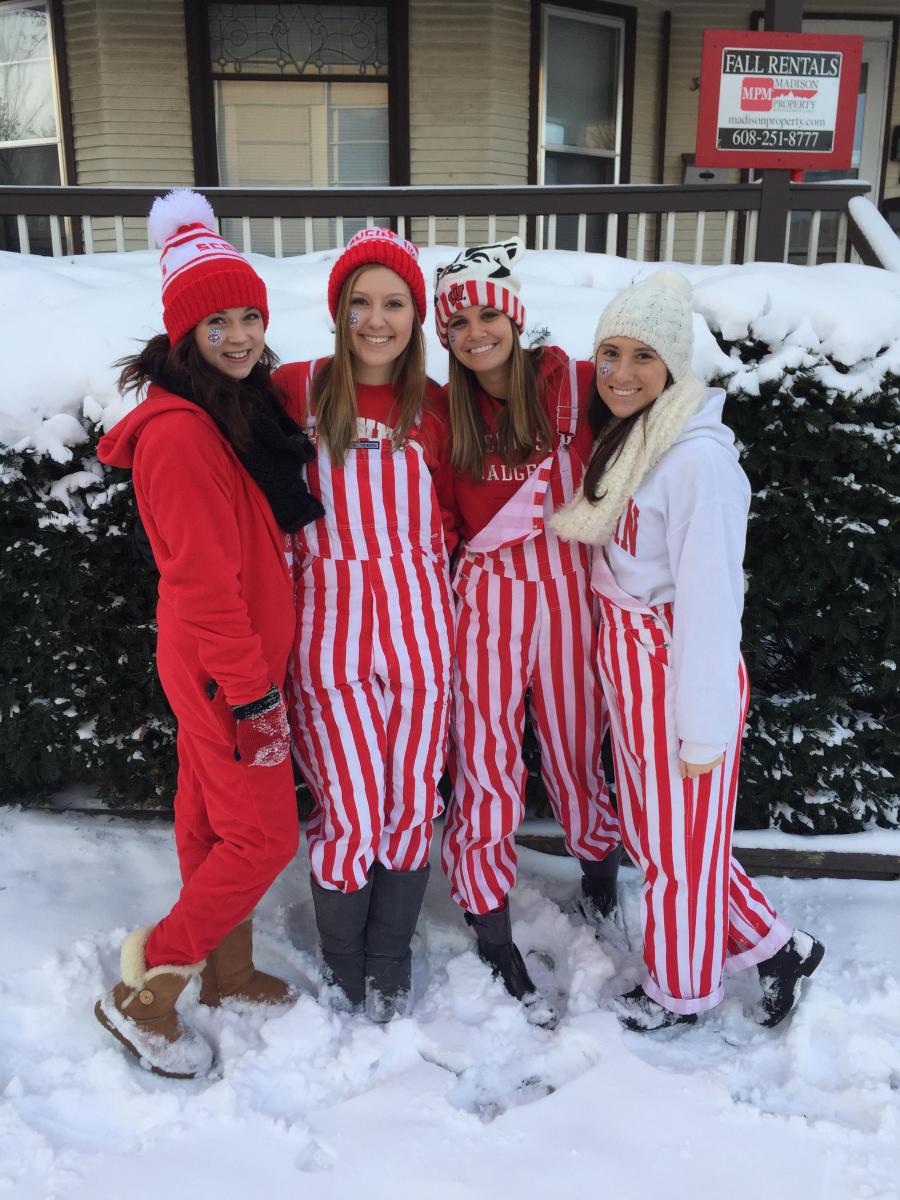 Making the trek to the tailgate

If you’re the one charitable soul who’s offered to throw the tailgate, you get the fun job of sitting in a line hundreds of pickup trucks deep. You regret your decision.The free bus from campus is an option, but you have no idea how long it will take, how rowdy it’ll be or whether your stomach can handle the terrible driving and stopping and starting. You avoid checking your phone, you know the Uber surge will be at least 3x and your 9% battery probably won’t last long enough for him to get close. For half a second you think about walking, but who walks when they’re this fucked up? 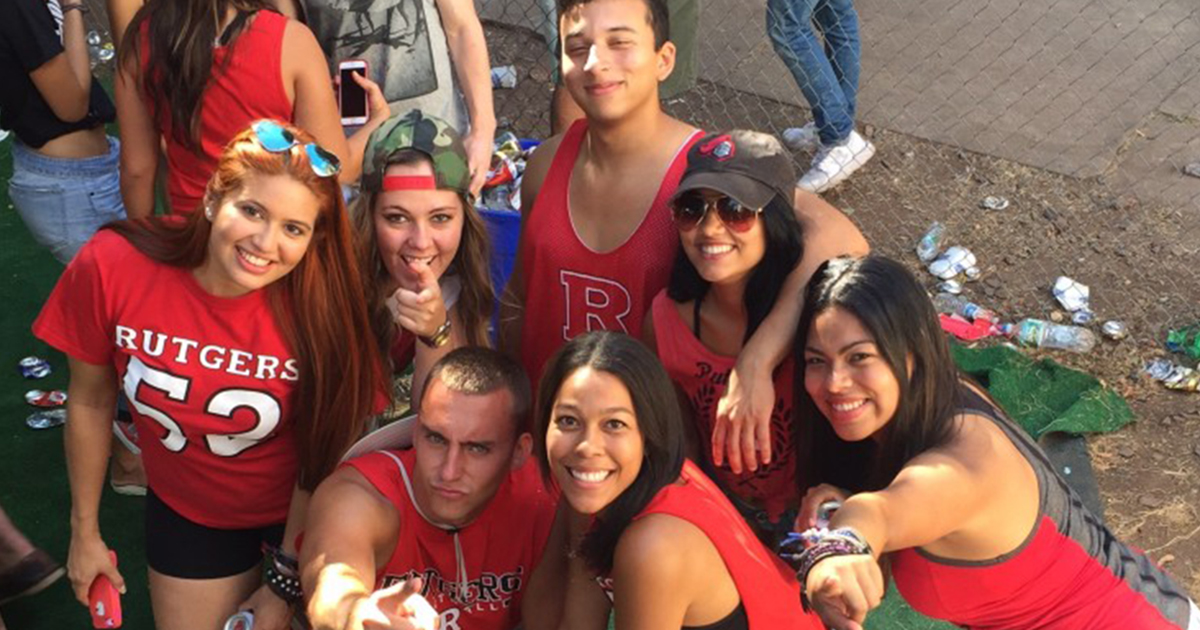 Alumni are like the manna from heaven raining down on friendly fans on game day. They quite admirably (and a little concerningly) love their alma mater more than the current students – why else would they drive all the way back in an RV to watch their team lose? They have great stories and even better food and all they’re looking for is an impressionable youngen’ to share it with. That’s why suffering through a “back in the day” rant is your in for a shot of something better than Fireball and some actual sustenance that will get you through the day.

It’s worth it, even as Uncle Rick (as he insisted you call him) breathes his Jack Daniels breath a little too close to your face, eyes glazed over with tears and intoxication, telling you about that big win in ‘78 when they stormed the field. Just remember the buff chick dip on the table behind him. Worth. It. 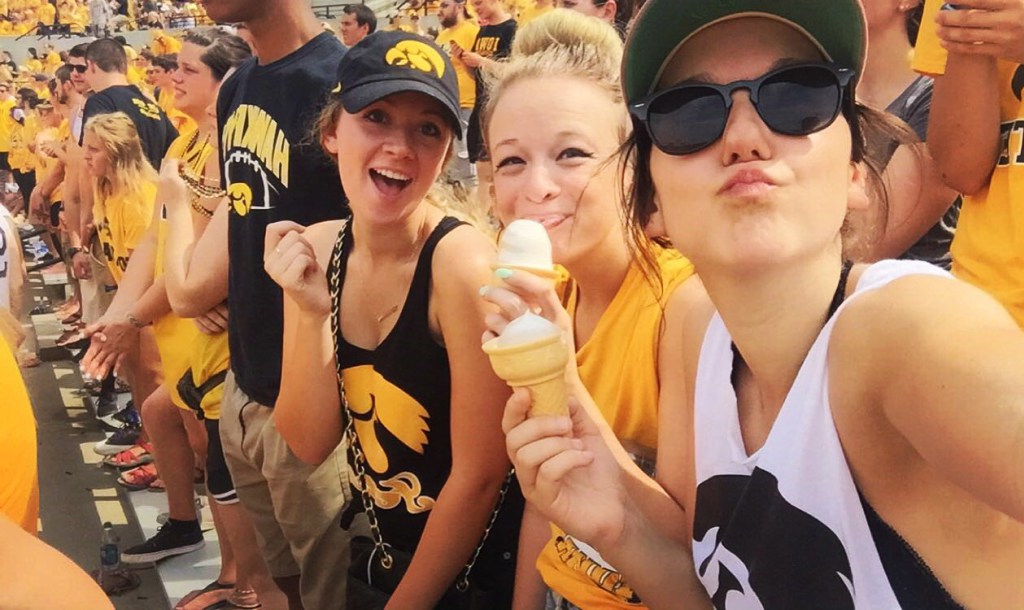 The Big Ten is a pretty complex conference, the midwest block fight for supremacy while little fish like Rutgers fight to stay relevant. One year you’re supposed to hate Michigan State, the next year Michigan, the year after, Ohio State. No-one knows why these fickle relationships flicker more than your average casual hookup, but you know you can never keep up. There’ll be a school you think you’re overstretching by call them your rival and another that you don’t think is worth your time, but chances are you’ll be too blackout to even think about why you’re chanting “Fuck Penn State.” 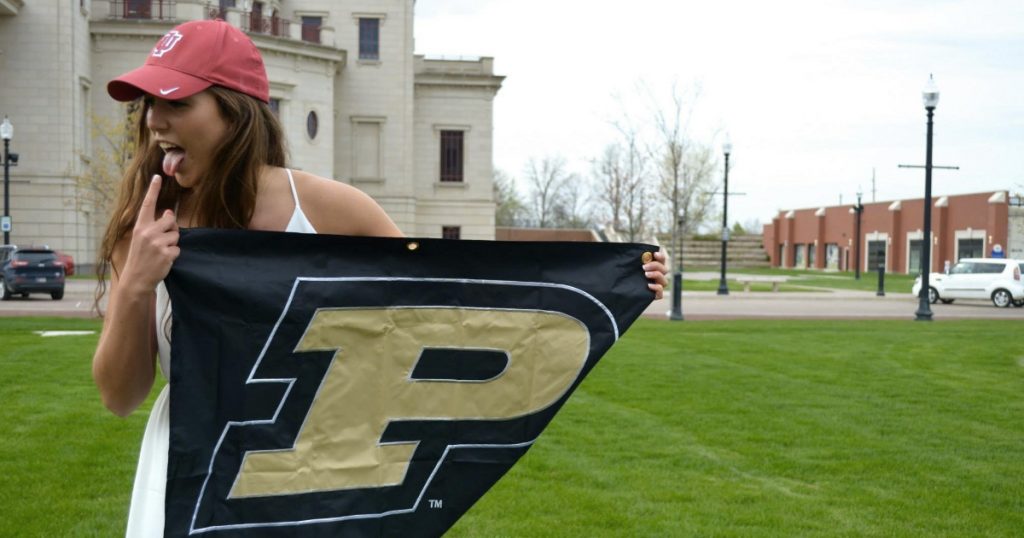 It’s inspiring that someone woke up one day and said, “You know what would make a great game? Getting a bunch of belligerently drunk people to attempt to strategically throw a hammer into the air, flip it and slam it down on a stump!” And everyone else cheered in encouragement “yes, a grand idea indeed!” Tailgating games are all about showing off your skills at doing the most random tasks like throwing a frisbee at a can or a bag of beans into a hole. Adding some alcohol in the mix makes games like dizzy bat the staple at any self-respecting tailgate and the perfect entertainment for those smart enough to just watch. 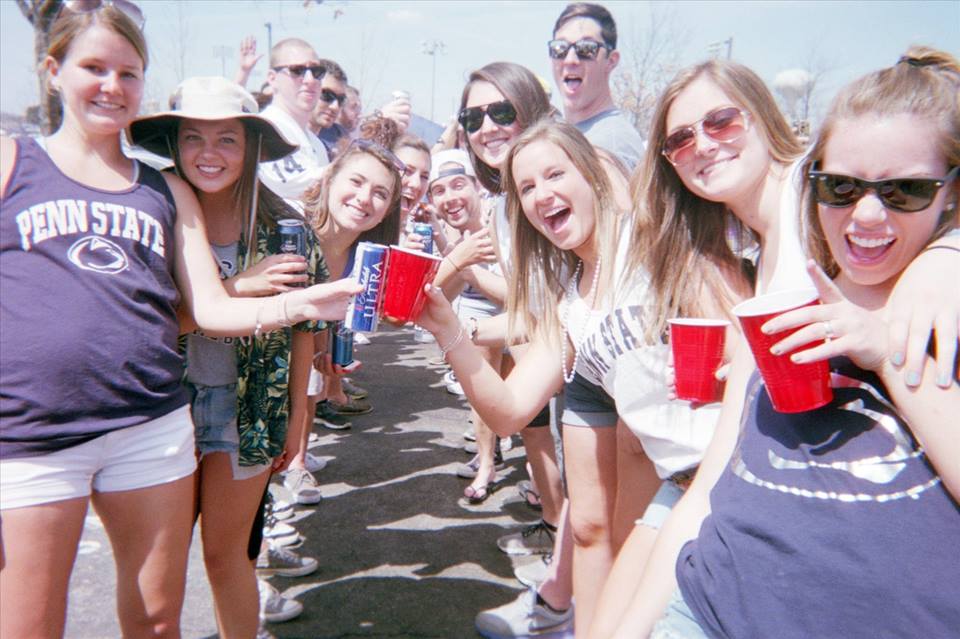 Getting to the game in “just enough time”

This may mean you’re camping out the whole week so you can be front row. Or you’re leaving the tailgates a little too close to kick off attempting to meet up with all your friends by that “landmark” you all agreed upon that you’ve now realized is pretty unhelpful. But “let’s meet by that one boulder” seemed like a good idea earlier in the day. Whether in the stadium, or downtown because you missed ticket sales again this year (still too soon?) you’re making sure you’ve got a solid spot to watch the game with your friends. 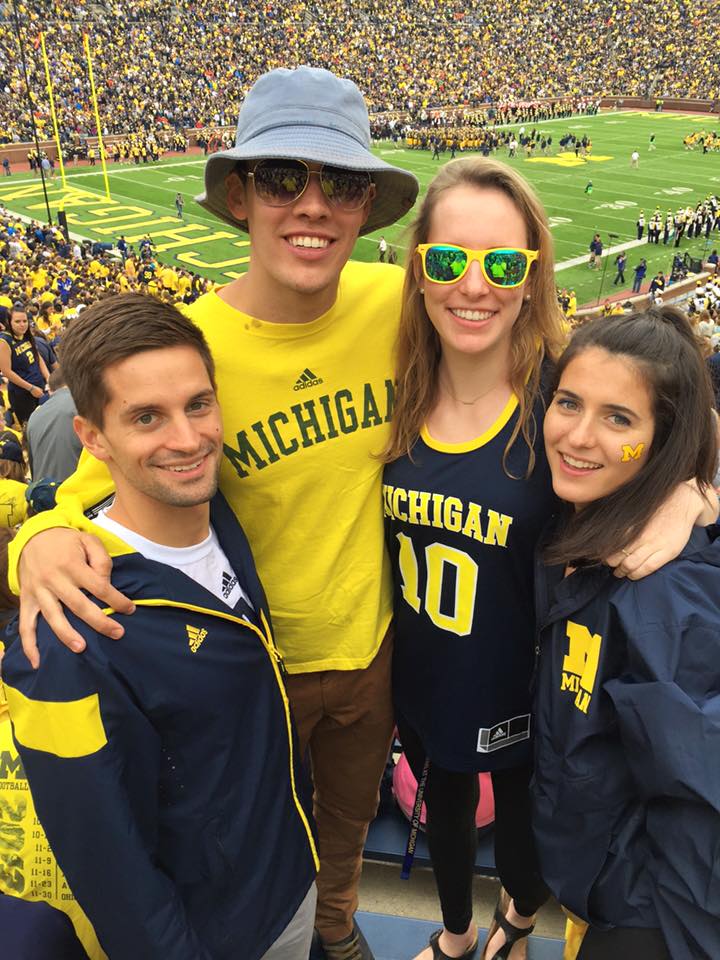 Making it into the stadium (with or without your alcohol)

By this point in the day, life is a blurry haze. You’re running all over the place, trying to find a spare seat, maybe get some nachos because you threw up the dope alumni food, and stick with your friends who have melted into the crowd. You watch the opening show, see the fireworks, try and avoid the security who’ll definitely take away your Poland Spring bottle full of vodka. You realize at this point that it’s actually a White out/Black out/Stripe out/Whatever out game, you’re wearing the wrong color and you stick out in a sea of people that did get the memo. 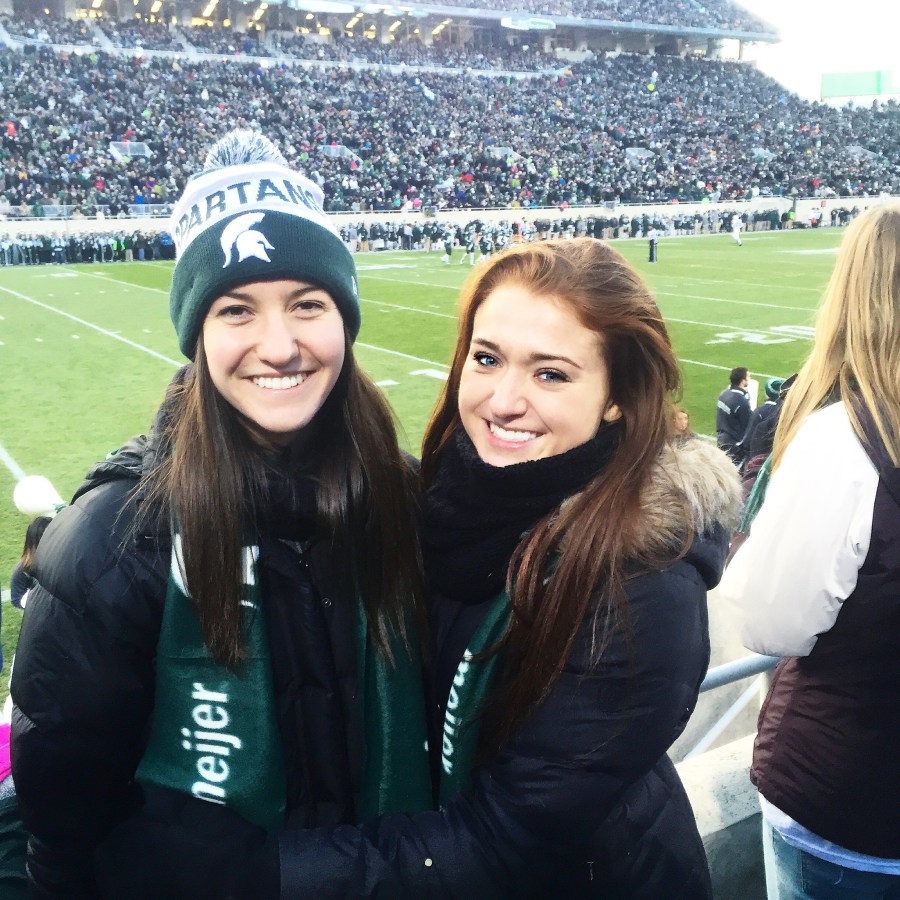 Win or lose, it’s been a long day, but it’s not over yet. There are the invincible greats who are able to just keep on trekking through the day and to those brave few, we commend you. As for the rest of us, a nap is crucial. Just a quick one though. And so you fall into the trap of the post-game nap. You set your alarm for an hour later and swear you’ll get up for it this time, still beating yourself up for never making it out after last week. And yet it goes off, you snooze it and next thing you know it’s Sunday. Or you attempt to rally and make it out downtown half zombie, half something still not quite human. It’s not for the brave of heart, but you were never a quitter.

Last Saturday of the year spending it the only way we know how to. Go Bucks, beat Clemson! #saturdaysareforthebucks

Waking up in a bit of a haze, still in your clothes from the day before, you go to social media to find out what actually happened at the game and update your Insta with a #gameday pic. Of course you were there to watch, but if you’re being honest you may have left early or were probably talking through some of the big plays, so it’s just worth the update if not reliving the glory. The crew meets up for brunch before you all prepare to be slugs for the day and MAYBE get that writing assignment done finally and you see some seriously dedicated fans who apparently woke up post-game day and decided to keep the school spirit going – throwing on a suspiciously grass-stained jersey, some high socks and Converse and worn-in face tat! But more likely, they’re just the poor souls who slept in a little too late and are now doing the walk of shame home. Don’t worry, it happens to the best of us.