‘The media gives a very negative and false perception of our faith’: A Muslim student on prejudice in America

‘I am a living, walking, breathing example of my faith, and I want to be a proper representation of that’

Growing up in the suburbs of Philadelphia, Lamis certainly stood out. The 20-year-old openly Muslim woman has received more than her fair share of rude comments, insensitive questions and outright stares, facing a type of prejudice that occurs in many people’s daily lives.

Despite the ignorance she has faced, she remains steadfast in and vocal about her identity as a Muslim. The Tab spoke with Lamis about her story and experiences with prejudice and the negative perceptions that people often have of Muslims.

What is your family’s background? How did you first come to the US?

I came when I was three months old. My dad was already a citizen, so when I came I was a naturalized citizen. I’ve essentially been born and raised here, but not technically, that’s how I like to classify it. My dad’s originally Egyptian, and my mom’s originally Syrian. We always lived in Pennsylvania, but I think I moved to suburban Philadelphia around kindergarten, first grade.

When did you first start becoming more involved and open about your faith?

I went to Islamic school up to fifth grade, so I was used to everyone around me being Muslim. And then when I went to middle school–public school–it was a huge adjustment for me. I had also just recently started wearing my scarf. My first day of school I think was the first day of Ramadan…I remember I was fasting. So like, think about it this way, you’re a new student at a new school, just started wearing my scarf a few months back, first day of school I can’t eat. [laughs] It was a lot all at once. I prayed every day at school, but I wasn’t very vocal about it to people around me. So, a lot of times, I’d be like, ‘I have to go to the bathroom’ and then I’d go pray.

Then, as I got older, maybe around eighth grade, freshman year of high school, I was a lot more vocal about it. I think that was also me being like why am I hiding it, it’s not necessary. I think I became a lot more vocal and religious after entering public school because I had to make that decision to practice my religion.”

Did you experience any significant prejudice growing up in suburban Philadelphia?

A lot of times these people had never met an outwardly Muslim person before. I think a lot of people had ignorant parents who didn’t really know…so here’s me coming in, the only hijabi in the grade, and people started asking me all these questions. I think most of the comments I would get were in middle school. I remember in seventh grade I used to carry a bag around, and some of the girls were like, “oh, do you have a weapon in your bag?”And then another time we were at an event and one of them yelled out, “Osama bin Laden!” But I think in high school people realized I had a mouth and that I was going to say something to you, so people stopped saying stuff to me. I ended up founding the Muslim Student Cultural Association. At that point, I was a lot more vocal.

Do you feel like you experienced the same kind of comments or questions outside of school?

I didn’t, but my mom has. I remember once we were in the grocery store, and one person just yelled out to her and called her a terrorist. I get a lot of stares, for sure, which I’ve kind of gotten used to at this point. I think it’s more questions, too. Sometimes, people will assume where I’m from or that I’m not from here. When they ask me where I’m from, they automatically assume I’m gonna say my ethnicity. I was raised here my whole life, this is all I know, so it’s kind of like people are stripping my identity away from me by choice. That’s just something that a lot of first generation kids deal with or people who have different ethnicities.

Making a shift from the suburbs to an Ivy League school, do you feel people are been more tolerant on your campus?

My campus is pretty liberal. Thankfully, I don’t think I’ve really endured much racism or prejudice. But, you know, the stares happen a lot. I remember going into the dining halls and people looking at me funny, but that’s about it. I think my school brings such a diverse group of people…there’s really no room to be prejudiced and people will call you out for it.

Have you experienced anything different as a result of the current political climate?

Leading up to the election, I think all of us didn’t think was going to happen. I realized how much of a bubble I’m in. The day after the election, there was like a mourning on campus because no one could believe it happened. People were crying, it was bad. I couldn’t sleep that night. I think what it opened my eyes up to was that there are a lot of closet racists…like this guy literally wanted Muslims out of the country. I can’t believe that people who I’ve known, who know me, who have been in school with me for years, actually decided to elect this guy when he wants me out of the country, wants people like me out of the country. I know people taking off their scarves because of this. Obviously, it’s multi-faceted as to why people take it off, but I think a large factor is not feeling comfortable.

I saw someone posting on Facebook like, “anyone know places to study abroad, if it’s a hijab-friendly place that’d be great.” You have to think about that. I’m very aware of my scarf sometimes and where I am. I know my mom always gets nervous in the airport. I remember once we were going to London, and I got stopped. I was wearing lotion on my hand or something…and they took me to a room, did hours upon hours of testing. We go through this ‘random’ checking, it’s not random, and it makes a lot of things that you would think that would be easy a little bit harder for us to do. You constantly have to be aware of what you’re doing, like not speaking Arabic in the airport. 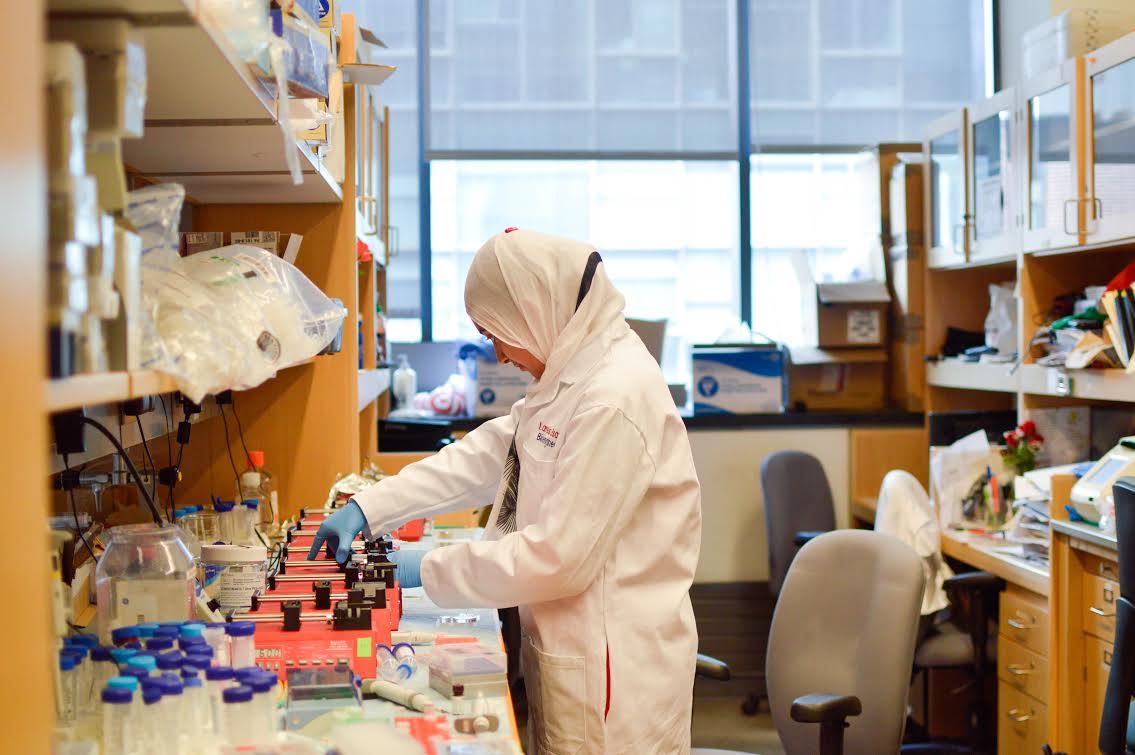 So, has the current political climate made you feel more unsafe or more confident in your identity?

I think I’m more confident in it, I’m more vocal about it. I’m more cautious of my surroundings, I’m more aware, but I wear my hijab more proudly. I realize that I might be one of the only Muslims that some of my friends meet…I’m constantly aware of it. I have to be careful of what I say, what I do, because I am a living, walking, breathing example of my faith, and I want to be a proper representation of that. It’s pressure, but I’m willing to take it on.

What are some of the most common misconceptions that people have about your faith?

That I was forced to wear my scarf, that’s a big one. I wore it pretty young, and I went up to my mom and said, ‘I want to start wearing my scarf,’ and she was like, ‘are you sure?’ I remember my dad was also apprehensive. But I was like, I’m going to wear it, this is what I want to do. I was determined. Obviously, the whole 9/11 thing is always been in the back of our heads, and media perception of Muslims since then hasn’t been very positive, so this is a lot for an eleven-year-old to carry on her shoulders. But honestly, I think it’s the best decision I ever made. Other misconceptions…I feel like a lot of people think that Islam is a ‘strict religion,’ but if you look at all the Abrahamic religions, we all have common tenets. It’s not like what we do is foreign.

Going forward, do you have any advice for people on how we can be more tolerant and open-minded towards people of other faiths, ethnicities, races, etc.?

I think the first thing is ask questions, but ask them in the right way. I love it when people ask me questions, but sometimes people can come up to ask questions in a negative way and come in attack mode. I think some people just don’t know, a lot of people are just ignorant and all they know is the media. The media gives a very negative and false perception of our faith. When people see ‘terrorist,’ a lot of people automatically assume a brown person who’s Muslim. Islam is one of the largest religions in the world…I think it’s a matter of knowing it’s a very small percentage of people who are in the media, but they’re the ones who get the most airtime. The KKK is not the picture of Christianity, so then why are you saying the same thing about other religions? I just want people to educate themselves. Knowledge is power. Change the rhetoric and try to soak in as much knowledge as you can.