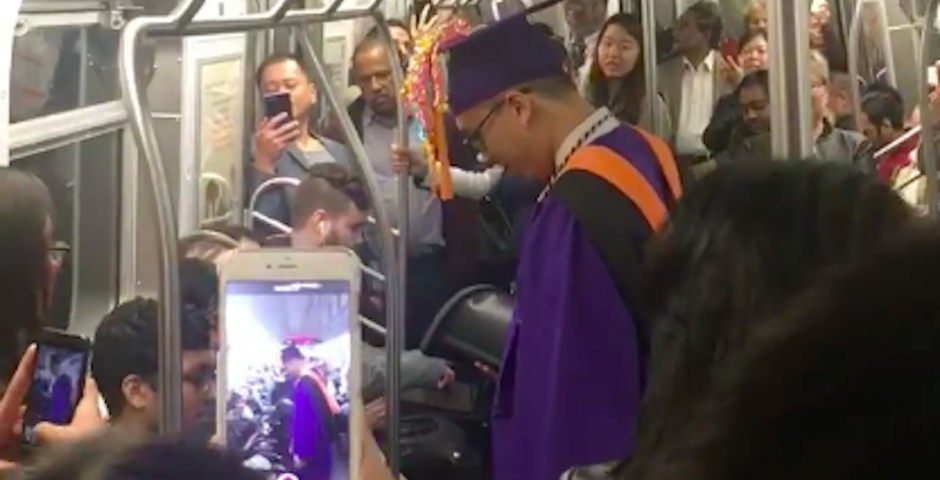 When student Jerich Alcantara missed his college graduation due to train delays, his fellow subway riders put together a ceremony for him on the spot to make sure his achievements were celebrated.

Poor kid missed his graduation because of the train delay this morning….so we threw him a graduation on the train.

Fox reports CUNY student Jerich was on the Queens-bound E train in his cap and gown when the train got stuck for over three hours, due to accidental use of the train’s emergency brakes. By the time rescue trains arrived, Jerich was already too late to walk across the stage at his graduation.

“I announced to the whole train, I said, ‘Hey guys, thanks for coming out today to see me walk and graduate,'” Jerich told Fox 5 NY.

People in his train car then came together to create an impromptu ceremony for him. 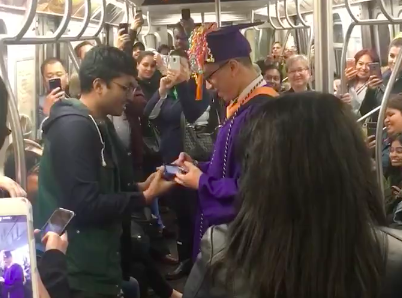 “We got my buddy to hand me the diploma that he drew up on his phone and he handed it to me and shook my hand like he was the dean. It was great,” Jerich said. He even offered to Airdrop the “diploma” to anyone on the subway who wanted a copy.

Another rider played Green Day’s “Goodriddance (Time of Your Life)” on a speaker he happened to have on him. Most just cheered in support and filmed the ceremony on their phones.

Once Jerich reached the graduation venue, his friends threw him another ceremony where he was able to walk across the stage.

The president of the college he attended told Fox that she looks forward to giving Jerich his diploma in person.