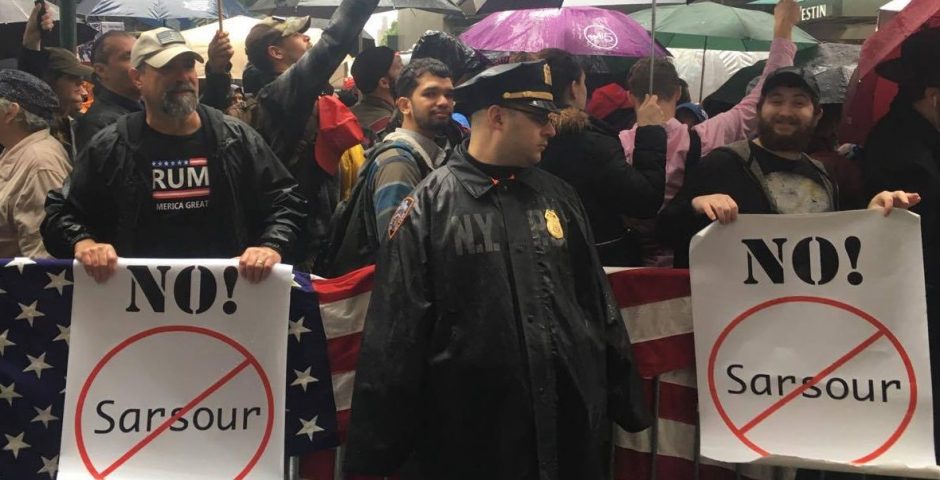 ‘Go back to Syria’

A group of far-right figureheads gathered this afternoon in Midtown Manhattan for a protest against Muslim activist Linda Sarsour.

The sidewalks leading up to the event were hectic, as supporters and protesters attempted to make their way to the event.

Chants of “Milo and your internet trolls, we’re gonna stop your fascist goals” could be heard from opponents, and around 500 people curved around the block. From young people to baby boomers, Make America Great Again hats decorated the crowd.

The speakers, including Assemblyman Dov Hiking, Milo Yiannopoulos and Pamela Geller, gathered in the rain on the back of a pick-up truck to address the audience. 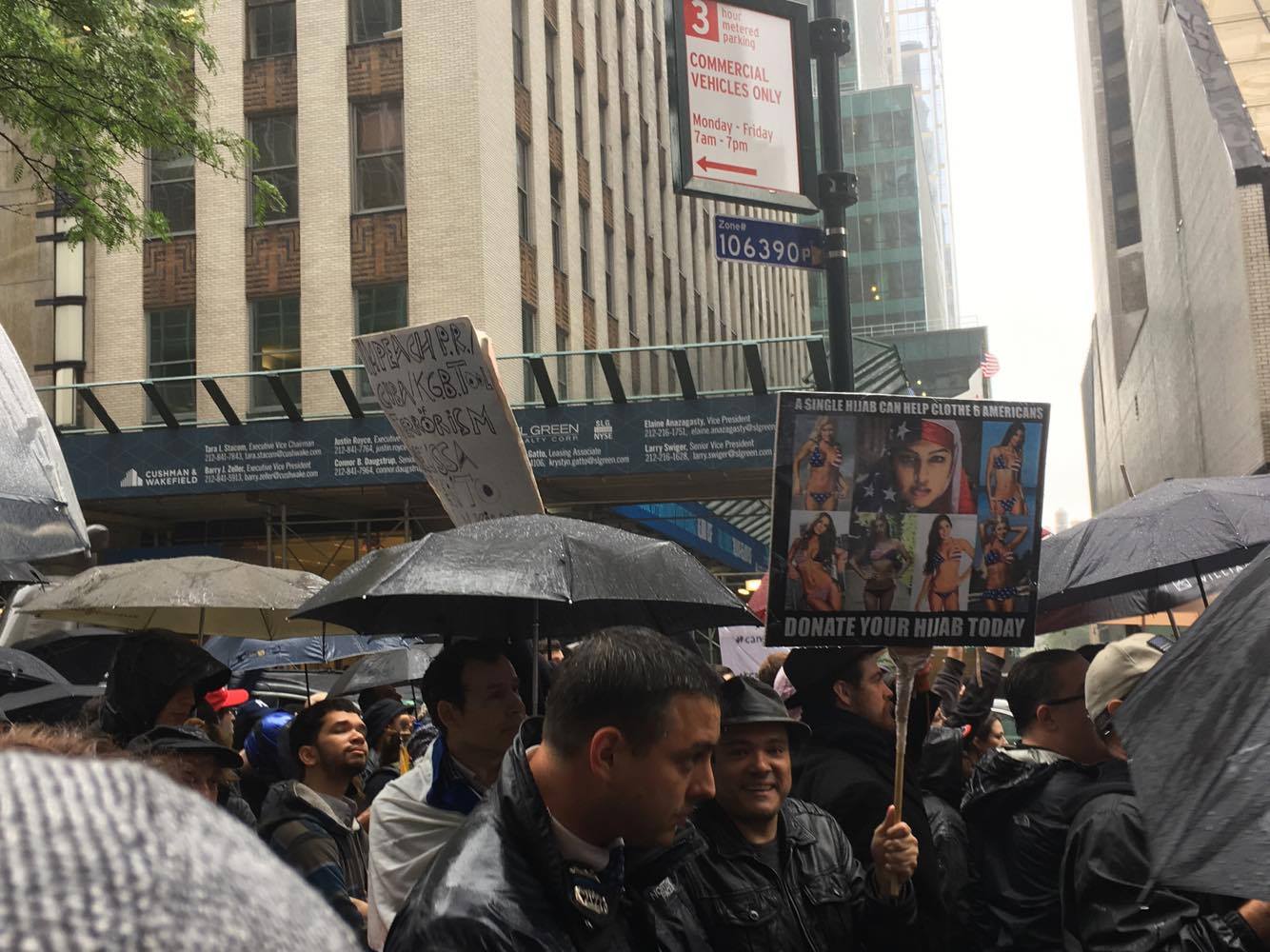 Geller, the host of the event, decried her protesters as “little white girls who ought to have their vajayjays cut in solidarity [with Linda Sarsour].”

While addressing the crowd, Geller made remarks about the hijab being a “cloth coffin.”

“We speak for the girls who wear the hijab and are forced to,” she told her audience.

Assemblyman Dov Hiking was up next, calling the decision for Sarsour as CUNY’s commencement speaker “outrageous.” Hiking then yelled “Shame on CUNY” for allowing her to spake. “Shame on CUNY” was the chant that rang out after.

A young, bearded man started chanting the word “shame,” Game of Thrones style continuously across the center aisle. Members of Bearcats, a white supremacist group, were in the crowd – three of them clad in helmets, dressed like soldiers.

Speaker Lauri Regan expressed disgust over CUNY “supporting Jew hatred,” while Assemblyman Dov Hiking asked why CUNY would have a commencement speaker “who supports terrorism openly.” Noni Darwish asked: “How can they represent the future of our children in America” if Sarsour supports Sharia (as they alleged).

The next speaker up was Dr David Wood, who told the crowd: “Students are brainwashed for years. Their minds are wiped clean.”

He went on to say: “The final marching orders from the university are go with Sharia,” and for those who supported Sarsour to “Go to Manchester. Go back to Syria.”

Protesters started to thin out before Milo, who most of them were there for, showed up to the event.

Geller got back on stage momentarily to state “Every Jewish donor to CUNY should pull their money.” But it seemed Geller was stalling for Milo at this point. “The best Jews sometimes are the Christians that stand with us,” she said. This statement lead into: “They say no pussy grabbing, how about no clit cutting?”

Milo then entered, and the crowd got what they’ve been waiting for. He wore sunglasses in the rain and a silk floral bomber jacket. “What is this weather about? Maybe God is Muslim after all,” he said to applause. 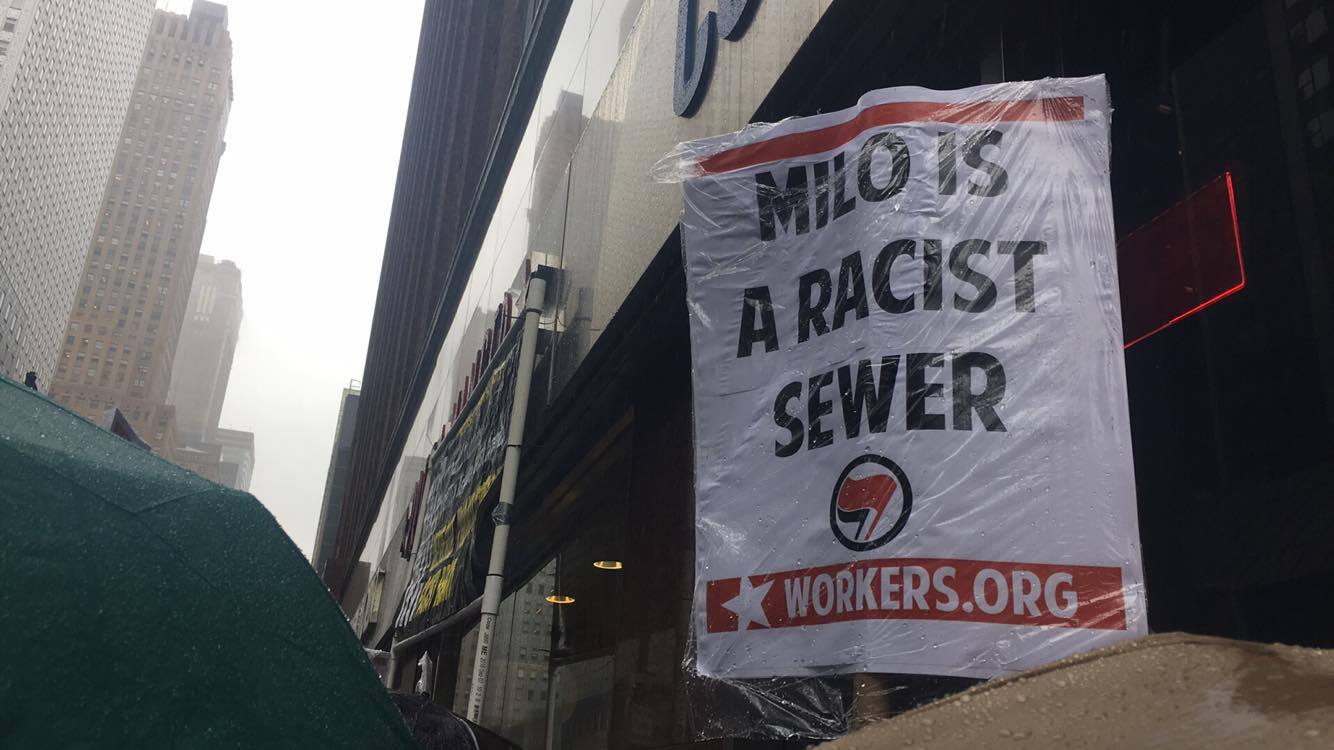 “I would suggest CUNY’s yarmulke wearing population stay home just in case Linda comes,” he said. “You should not allow university professors like the spineless cunts at CUNY to let this happen.”

He ended his speech saying: “I would have paid her fee, no matter how many goats she asked for.”