UMD doesn’t even have a valedictorian

A Linkedin article from a University of Maryland student claiming to be a valedictorian who dropped out of school went viral over the weekend, capturing the imaginations of wannabe entrepreneurs looking to pursue their dreams. But it was full of factual errors and glaring inaccuracies.

Gio Managadze, a Maryland student, published a LinkedIn post declaring (in no fewer than 3000 words) why he was dropping out of school two weeks before gradation, rejecting his position as valedictorian.

The post quickly went viral and was shared thousands of times, accruing praise from over the world. “Positive and inspiring,” said one fan, “wonderful” gushed another, and incredibly: “He has the right gumption for entrepreneurship.”

But sharp-eyed commenters have already poked holes in his story. The most glaring fault is his claim of being UMD’s valedictorian – no such position exists at the college.

The closest accolade they have is the “University Medalist,” and this year, he’s not Gio Managadze but a Physics major called Gregory Ridgway. 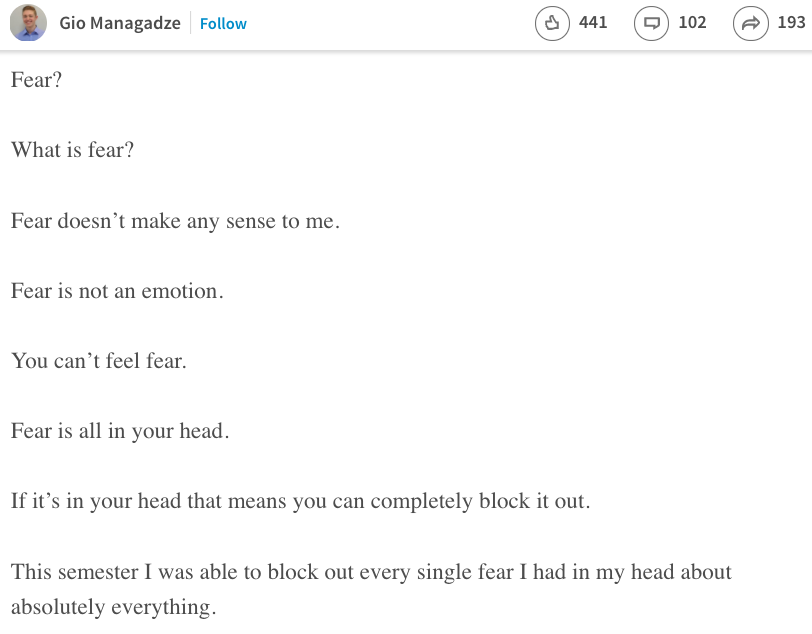 A real screenshot from a real post about a fake position

Also, the position of University Medalist isn’t known months in advance. The application for the position wasn’t due until March this year so the claim that “I was your valedictorian until about a month ago” doesn’t ring true.

Next up is the fact that according to his own LinkedIn profile, Managadze says he has a degree from Maryland. “If it is just a piece of paper,” asks a commenter, “why do you lie about it in profile?”

Managadze has dismissed those who doubt him as haters: 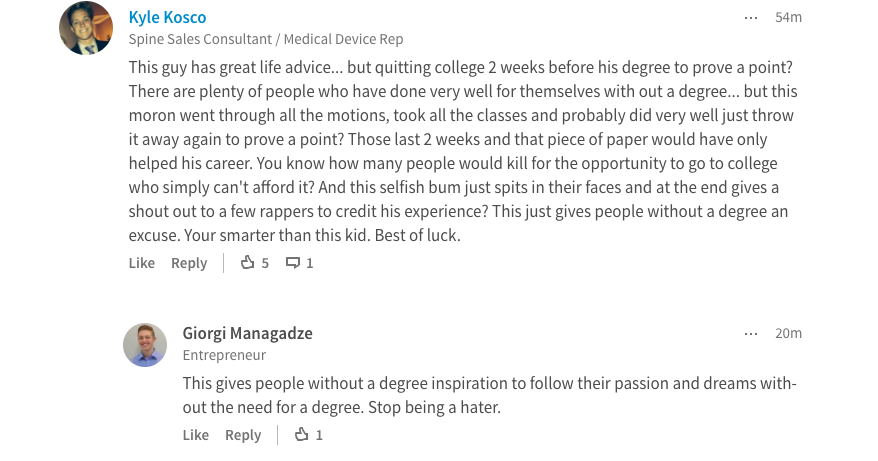 Let’s also take a minute to appreciate the way this post is written, a style that combines the worst elements of Silicon Valley brogrammer and the trash vortex of self-help literature:

Also, you guys, he works out every single day. And despite being super busy he was able to play sports, go out three times a week and pledge a frat (did you even get a bid?).

We’ve contacted Managadze to ask what’s going on and have yet to hear back.

Meanwhile the university itself is still trying to get to the bottom of the post. “There’s still some information we need to discover,” a university spokesperson told The Tab.

“You need to get rid of fake friends immediately. They’re only slowing you down,” writes Managadze in his post. Truer words have never been spoken.

A source in the university administration has confirmed to us that Managadze did in fact withdraw from UMD this month, a couple weeks before he was due to graduate.