‘They called him the next Mayor of Newark, perhaps, one day’

Set to graduate this week, Mujahid Henry, of Rutgers Newark, was killed in a hit and run car crash early Friday morning according to CBS2. 33-year-old, Eduardo Perez of Elizabeth, is being charged in his death.

Perez proceeded to drive to Elizabeth and crashed into several parked vehicles before he ditched the SUV on Liderwood Avenue, sccording to police. It was not long until he was taken into custody and charged with death by auto and leaving the scene of a fatal accident, reported CBS2.

Mujahid was a resident of Newark who attended Essex County College before transferring to Rutgers University. The Chancellor at Rutgers-Newark, Nancy Cantor, sent a message out following the Henry’s death commenting that he was, “A star on the rise, he was characteristically hard-working, aspiring to earn a graduate degree and go into politics, amazing all around him with the energy that enabled him to be such a success in college while holding down two jobs and volunteering in support of local public officials.”

Mujahid was set to receive his diploma from Rutgers University’s School of Public Affairs and Administration.

Henry politically active and was volunteering with Phil Murphy for the upcoming gubernatorial election. Early Saturday morning Murphy’s Facebook page was updated with this statement that referred to Mujahid as “bright” and an “outstanding worker.”

Murphy also referred to Henry’s faith, stating,”There is a Muslim saying, “Inna Lillahi wa inna ilayhi raji’un,” which means “From Him we come, and to Him we will return.” Mu, we will miss you every day. We will always remember your infectious joy, and your passion to make the world a better place.”

Darryl, Mujahid’s father, said that the family will be relying on their faith to get through this difficult time. 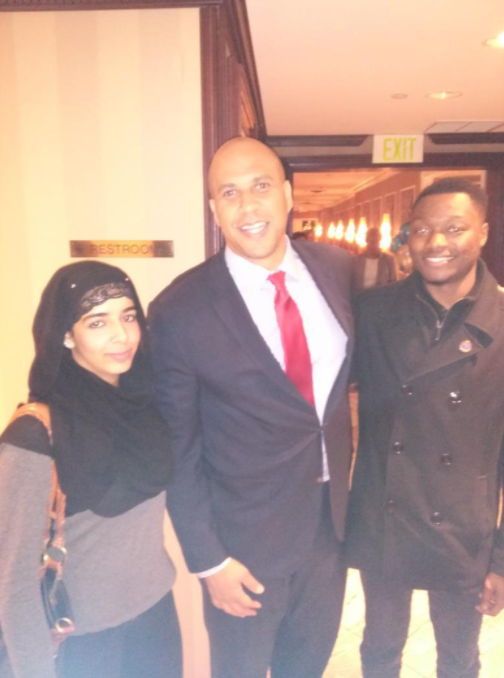 “@CoryBooker has yet o turn down a selfie with me ? #Democrats #MAH” via Mujahid Henry’s Twitter

He also commented that,  “They called him the next Mayor of Newark, perhaps, one day.”

Mujahid also posted a picture of himself with Cory Booker on his Twitter from when he attended the Chairman’s party.

Mujahids sister Maryam also attends the University and is a first-year student in the Rutgers-Newark College of Arts & Sciences.

Mujahid Henry’s degree will still be granted at commencement on Wednesday at Prudential Center and will be received by a member of his family.