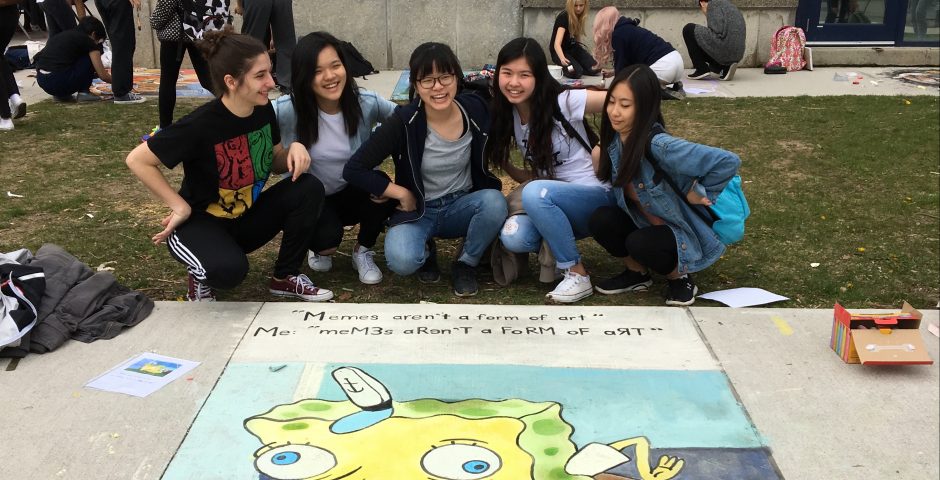 These high school students were told memes weren’t art, so they entered an art contest using one

I simply can not imagine living in a world without memes. They bring us together, and shine a light in a cold. dark world.

The cultural phenomenon is inspiring others to do great things like submit artwork of a meme in a chalk drawing contest at their high school.

Yes, you heard right. A group of students from Unionville High School in Markham, Ontario entered an art contest with the now-infamous Spongebob mocking meme.

The art school i go to had a sidewalk chalk drawing contest pic.twitter.com/GW6xHgPPOW

They told The Tab one of their teachers said “memes aren’t a form of art” so like any teenager would, they decided to do it anyway. 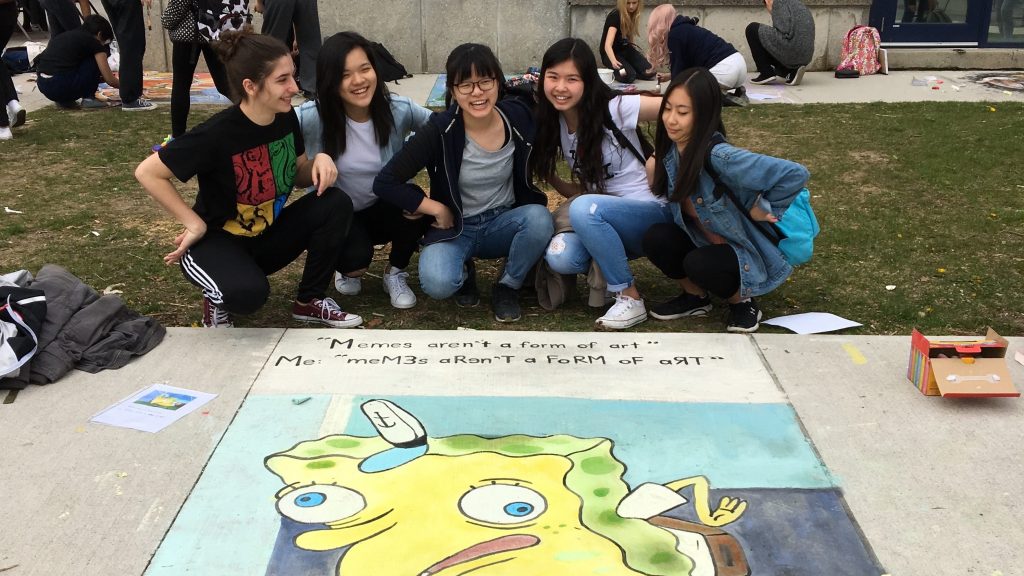 The Tab spoke to the ambitious high school students about their reasons behind this now-classic memery and the attention it got.

Why did you guys draw this?

Katerina: We honestly just wanted to do something fun. We weren’t trying to do some artistic masterpiece since this was just something fun to do with our friends. We also did a meme for last year’s chalk-off too. We’re all in the Visual Arts program so sometimes it’s fun just to relax and not try that hard. 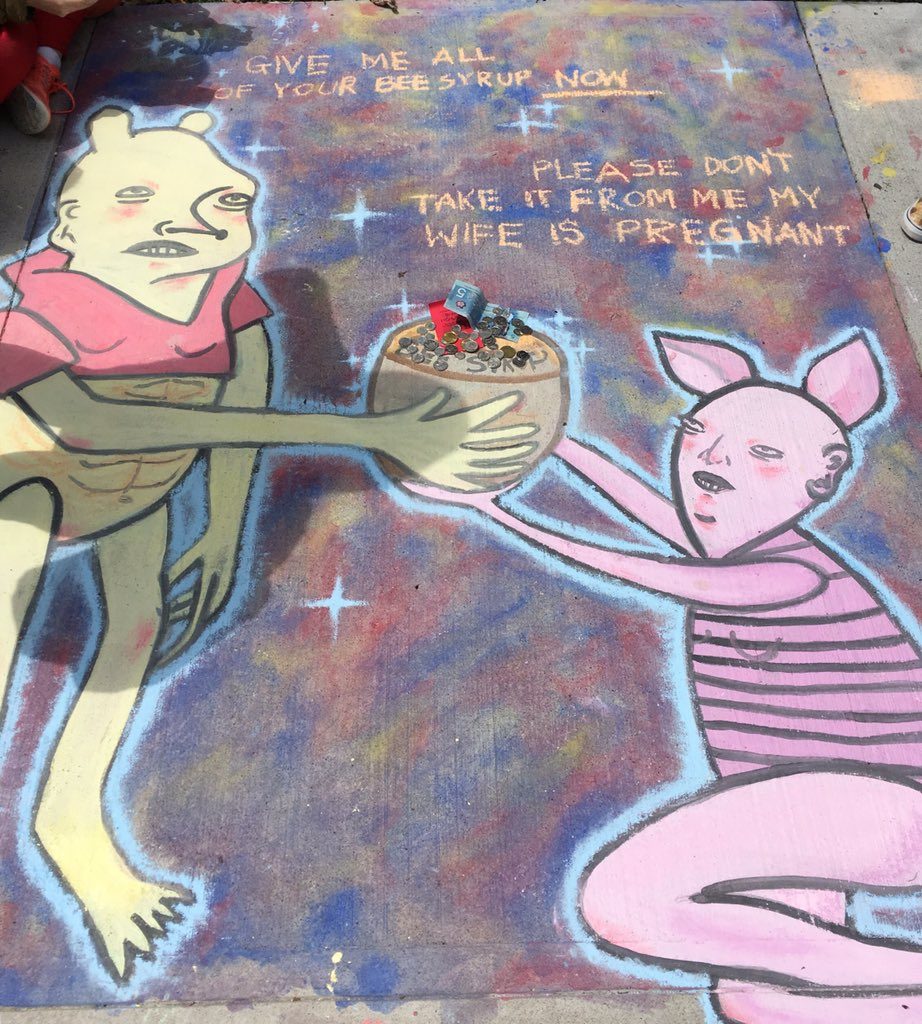 Their art submission from last year

Hayley: We drew it cause it’s an inside joke with one of our teachers and us. We wanted to do a Harambe one but he said memes aren’t a form of art and they die off quickly — I agree — but still.

Annie: We didn’t want to do something too serious, the point was just to have some fun with friends.

Why did you choose this meme specifically?

Hayley: OK first off, we got some people being like “>:0 this meme is dead!!! Stop!!!” But we all agreed that everyone has different meme preferences and other memes didn’t fit school criteria. So it was hard to choose. I thought it was kind of funny and it’s much better than Fred in the begone thot meme.

Katerina: The meme is trending a lot right now and like Hayley said, several people think that internet jokes like this will die off quickly. We all enjoy memes and since the Spongebob meme was making fun of something, we thought it would work if we did it.

How long did it take to draw?

Katerina: Everyone competing took morning classes off to work on it.

Hayley: It took us like a few hours but ours was the quickest because everyone else’s looked so good.

Annie: It took us about 2 hours to draw. 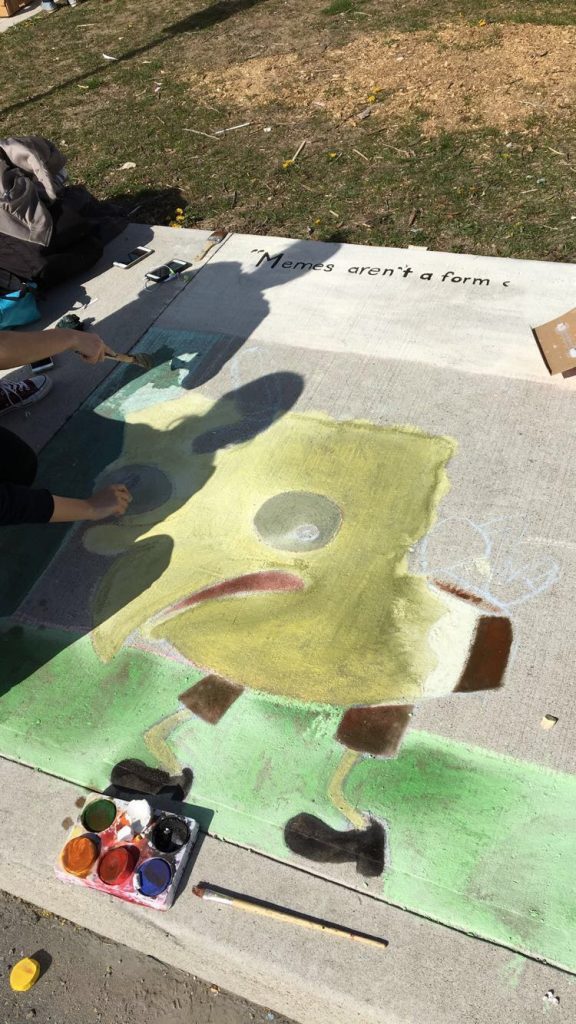 Did you guys win this contest?

Katerina: The results aren’t in yet, but I doubt it. There were other groups who took it more seriously than we did, and they did an incredible job. Like I said, we were just doing it for fun, not really trying for perfection. 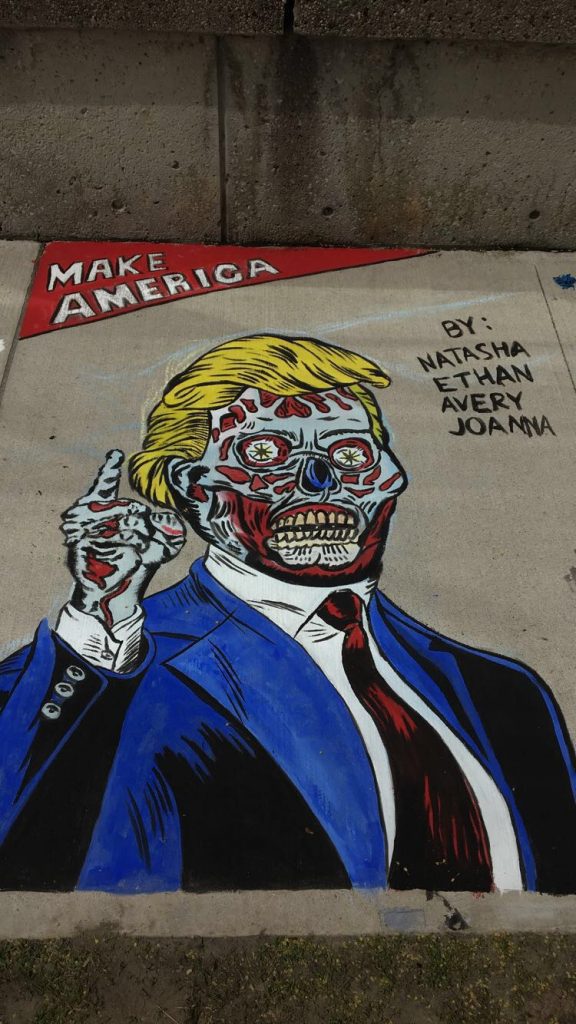 One of the chalk arts they’re competing against

Annie: The results for the contest hasn’t been posted yet. We might know sometime next week.

Hayley: We’re never gonna win it, especially not this year cause there’s no principles or elements of art in it at all. We really don’t deserve it when you look at the other groups we are competing against.

Now that it’s trending on social media, these high school students from Unionville are happy to bring some attention to their school and to be celebrities for a day.

“People were walking by and laughing a bit, but nothing crazy,” they said. “Then when it started popping up on Instagram everyone was like ‘THATS MY SCHOOL!!! UHS!!! WE’RE FAMOUS!! REPPING UHS!!!'”