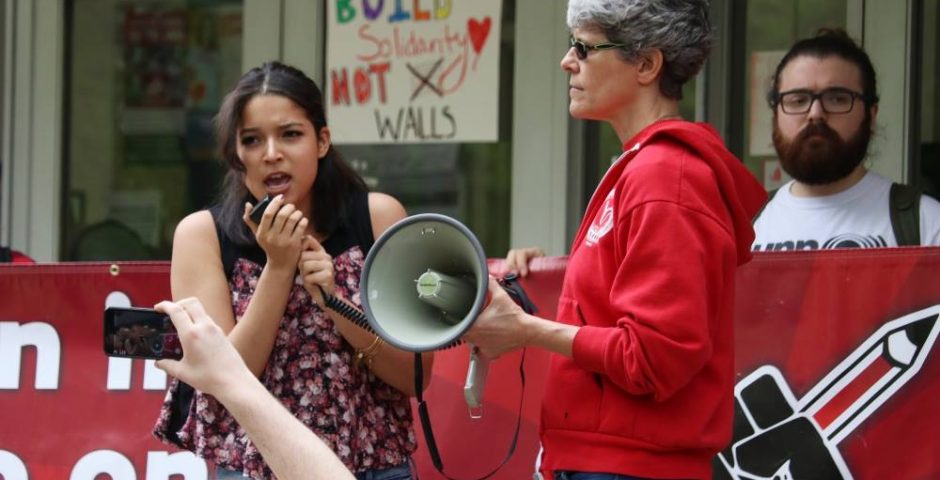 Early Tuesday morning, Carimer Andujar, an Engineering student at Rutgers University, UndocuRutgers President and student activist, met with an ICE official. She’s in America thanks to Obama’s DACA policy. DACA is a policy created vis 2012 executive order under the Obama administration that defers an undocumented immigrants from being deported for two years. 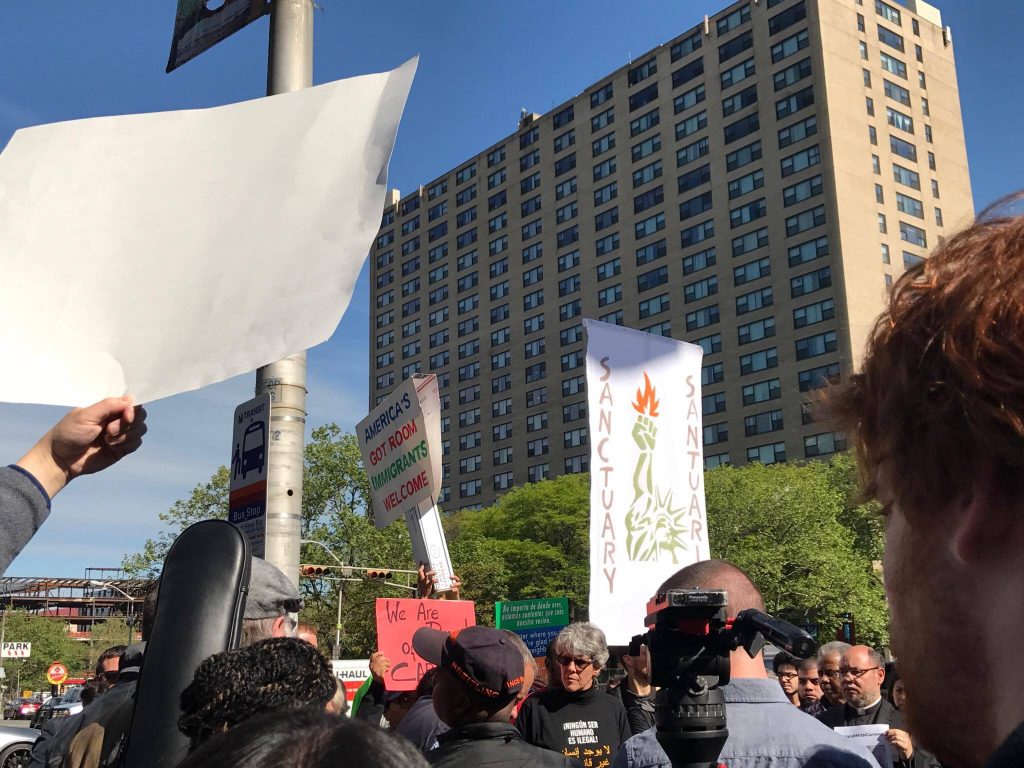 ‘Stand with Carimer’ rally on Tuesday May 9th. || Image courtesy of Talyah Basit.

However, while waiting for her DACA to be renewed, she received a letter stating that she would have to meet with a deportation officer on Tuesday, May 9th. The community’s response to this was an outpouring of support at an emergency meeting on April 27th and on May 1st at the he ‘A Day Without Immigrants’ protest that took place at Rutgers University and the later that day in Newark.

So it was no surprise when the Rutgers community, staff and students, came out to support Carimer for her meeting with the ICE official Tuesday in a ‘Stand with Carimer’ rally. The rally consisted of a number of speeches, many of which were from people who knew Carimer and spoke in support of her. University students from a plethora of different student organizations were also in attendance. As well as Clergy members, representatives and members of unions that gave speeches. 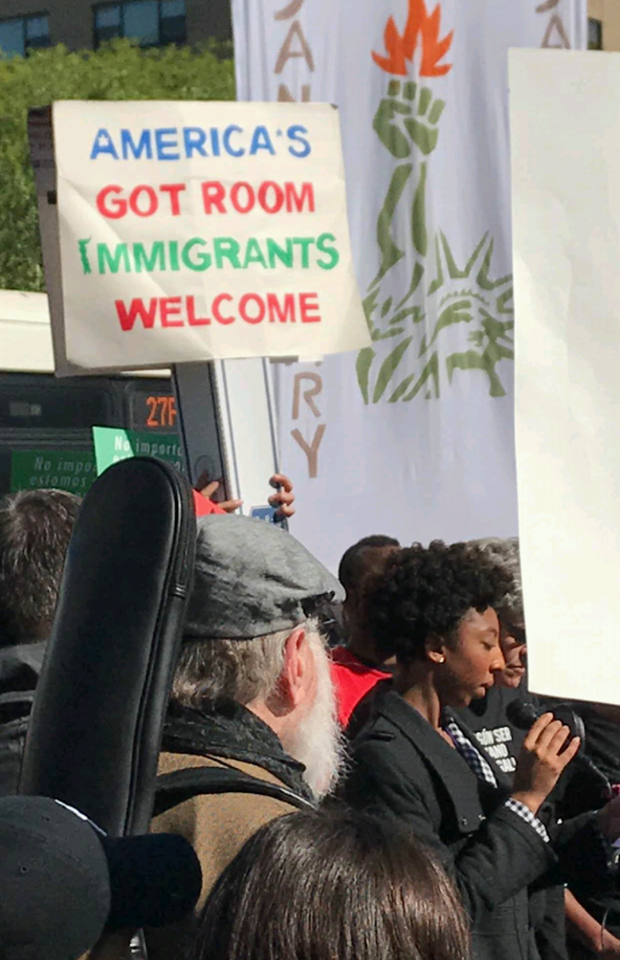 “To be able to see so many people come together on such short notice to defend a friend or member of the community around an issue that is unfortunately considered controversial is incredibly hopeful,” remarked Mackenzie Miller, a junior studying Political Science and Journalism and Media studies and a member of United Students Against Sweatshops as well as the Rutgers One Coalition.

One student, Adeel Ahmed, Co-President of RU Progressive at Rutgers University and treasurer of the Muslim Public Relations Council and someone who knows Carimer personally, gave a heartfelt speech in which he spoke to the similarities between his struggles as a Muslim American and how the meaning of solidarity is, “…The oppressed coming together to fight the oppressors,” noting that this is precisely what the Trump Administration and alt-right fear. That minorities will become a strong voice and fight for their American dream, an d as Ahmed noted, “To chase the American dream..that’s what [Carimer] wants.” Ahmed, also announced that the rally would continue and wait for Carimer no matter how long it took. 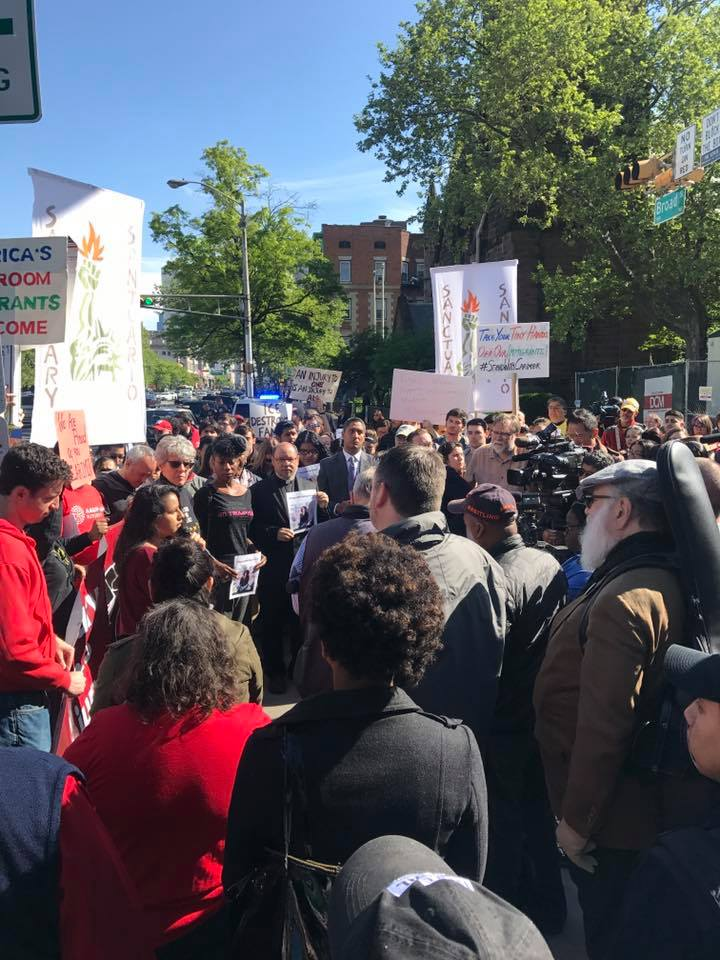 “We were strong, we were large, and we couldn’t be ignored,” April Nicklaus, a student activist majoring in environmental policy commented. Nicklaus described the overall vibe at the rally one of, “constant energy and activity,” albeit with some “emotional tension in the mix. But she made a point of how the positive energy dropped as the crowd waited for Carimer to come down. For a while she did not appear. After around an hour, Carimer texted Sherry Wolf, senior Organizer of the Rutgers Council of AAUP Chapters, that she was on her way down.

“A sense of dread began to spread through the crowd, but we compensated by chanting, ” even louder than before.” Nicklaus explained. The chanting of “‘Ho ho, Hey Hey Carimer is here to stay,” died down as Carimer came out briefly recounted what went on during the meeting with the ICE official and announced that she was headed home to spend a peaceful Mother’s Day with her mom. 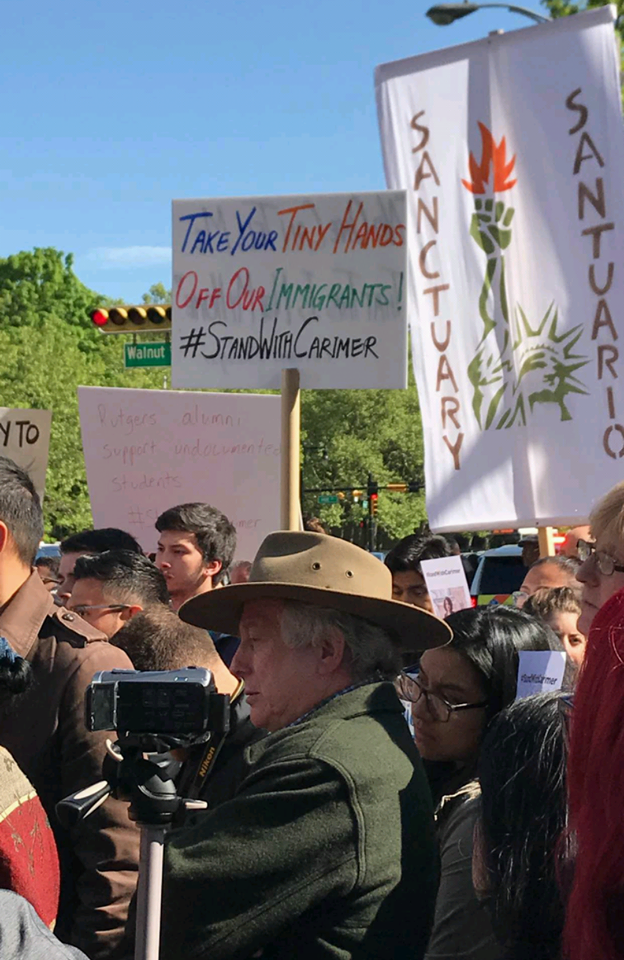 According to Marisa Jiminez,coordinator of the Rutgers One Student-Faculty Coalition, and someone who has done activist work with Carimer in the past,”The details of what specifically happened during Carimer’s interview with the deportation officer are unclear, but we know that she was able to walk out of the building, with the expectation that her DACA will be renewed in a few weeks.”

What we know about the meeting is from what Carimer recounted: that fingerprints were taken, and questions were asked. But, that for the moment, she is not being detained.

“Carimer’s interview with ICE hit close to home because I know her personally, but there are people in New Brunswick who have been detained in appalling numbers over the past several weeks,” Jiminez lamented. Andujar’s lawyers have speculated that she was targeted due to her activism. While there is no hard evidence to back up that speculation, there is hard evidence that ICE raids are happening in New Brunswick and all over America. Most deportations and detention going unnoticed and unaddressed until after the fact. 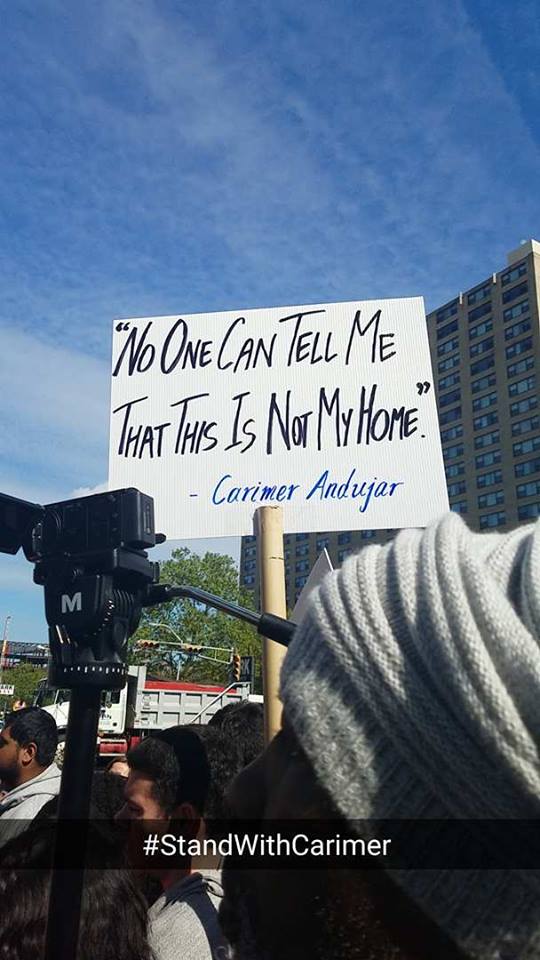 Many took to using the #HandsOffCarimer hashtag to spread word of the rally and Carimer’s situation. || Image courtesy of Marisa Jiminez, coordinator at Rutgers One.

As Carimer said at her original emergency meeting, “We always need to stay proactive before it’s too late.”

Andujar plans to finish her degree in Chemical Engineering and continue to her activism in her role as the President of UndocuRutgers by working to ensure that DACA recipients like herself have access to higher education and have ample opportunities at Rutgers University.