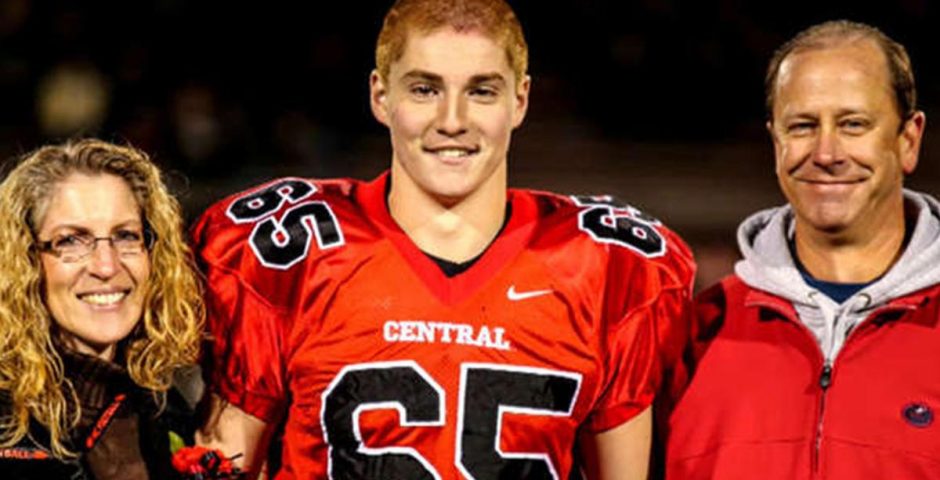 The tragic lesson from Penn State: Human life is worth more than Greek life

No one should die to protect letters on a house

It's unclear when Timothy Piazza suffered the final injury that led to his death on the morning of February 3rd.

At sometime around 10:40pm the night before, he fell down the 15-foot staircase in the Beta Theta Pi basement for the first time. He was placed on a couch and ignored.

At 11:25pm, he was slapped across the face three times by his pledge master.

Two hours later, while the rituals of bid acceptance night raged around him, he lay twitching and vomiting. The only help he was given other than cold water to his face was a backpack to stop him choking on his own vomit.

His final few hours were spent repeatedly falling. Onto the hardwood floor, against a railing, back down the stairs into the basement. His morning was a blur of struggling, stumbling and repeated injury.

Nearly 12 hours after his first fall, after he'd been Snapchatted, ignored, slapped, stepped over and neglected by those he hoped to call his brothers, Tim Piazza got help.

Perhaps most sickeningly, according to the grand jury report, a fellow pledge said in a group chat: “If need be, just tell them what I told you guys, found [Piazza] behind an away bar the next morning around 10 a.m., and he was freezing-cold, but we decided to call 911 instantly, because the kid’s health was paramount."

FULL COVERAGE: Ten former members of BTP received their charges today for their alleged role in the death of Piazza https://t.co/8anNJkZolg pic.twitter.com/68R632bjIB

Despite what official frat websites and most universities say, hazing is alive and well in American universities. These events happen all over the country – state schools, private schools, military schools, wherever there is Greek life, there is hazing.

And the vast majority of these initiations take place largely without incident. Egos may be bruised, skin grazed, hangovers incurred. Not innocent by a long shot, but a far cry from what happened to Tim Piazza.

But Piazza's death demands serious reflection. At least once a year, a fraternity member or pledge at an American university dies for absolutely no reason performing the rituals of Greek life.

In 2011, Cornell student George Desdunes was blindfolded and duct-taped, had vodka poured down his throat till he passed out and left in a room to die.

In 2013, Chun Deng, a pledge at Baruch College was delayed medical assistance for two hours after a head injury during pledging.

In 2014, Tucker Hipps from Clemson died after falling from a bridge his family alleges he was forced to walk across by his pledge master.

In these and in countless other cases, vital medical assistance was denied to those who needed it. It was denied for no other reason than to protect the fraternities where these incidents occurred. Scared of cops, of the university, of anyone who could shut them down, they lied and covered up to protect their own backs.

It's easy to brush what happened at Penn State off as another classic case of “frats being frats" dumbassery. But that would be a disservice to his memory.

As a friend of mine in Greek life said this weekend: “Sometimes just because something is done time and time again people forget that actual harm can come of it."

I'm sure no-one in Beta Theta Pi woke up that day hoping the night would end in tragedy – that an innocent kid would lose his life as a result of the callous actions of others. I daresay there had been years of the same hazing rituals without incident.

Accidents happen, people get hurt. But when your first, second, third responses aren't to get help, but to leave someone dying on your couch, then Greek life or not, you're a bad person.

Yes, they would have been in trouble even if they'd called 911 as soon as Tim fell down the stairs. They would've have faced punishments, maybe even got suspended. But at what point does this become bigger than getting kicked off campus?

Greek life happens. Hazing exists. These facts won't change overnight. But until human lives are valued more than a place in a campus house or letters on a house, there will always be another Tim Piazza.