A student’s status has gone viral explaining white privilege after a black student caused a campus lockdown for bringing a glue gun to school for a class project.

Jenny Lundt, a sophomore at Colgate, wrote about how she was able to regularly carry a sword around school without attracting police attention, while a black student had police dogs track him down for holding art equipment.

“That is the reality of the institutionalized racism in the United States,” she wrote. “If you think for even a second this wasn’t profiling, ask yourself why this sword is still in my room and has not ONCE made anyone uncomfortable.”

We spoke to her about what happened.

How did this start?

I’m sitting in my dorm with three other people and all of a sudden everyone gets a text saying “Due to the dangerous situation in the Coop, you are advised not to leave your rooms.” We were thinking: “What dangerous things happen at Colgate?” Nothing happens here. Then we get an emergency text, and an email and a call. We thought: “What the hell is going on?” All of a sudden everyone was on their phone, texting on GroupMe asking what’s going on. Someone said: “I have a friend who works for the EMT and there’s an armed person in the Coop.” Everyone was freaking out. I can’t remember how long it was till we got an email from Colgate saying “Active shooter, there is an armed person on campus.” The library went on lockdown, my roommate had to hide in the closet for five hours in an academic building. There was panic and rumors were flying like crazy. One person said they heard two shots fired. Another said there were two shooters. One said it was a suicide: someone ran down the hill and killed themselves.

Turns out it was a guy running in the rain. He had to go to from his car to the school building, a 30 second walk. It was raining so much he took off his shirt to keep dry, and he was holding a glue gun for an art project. That set off the campus lockdown for nearly four hours. 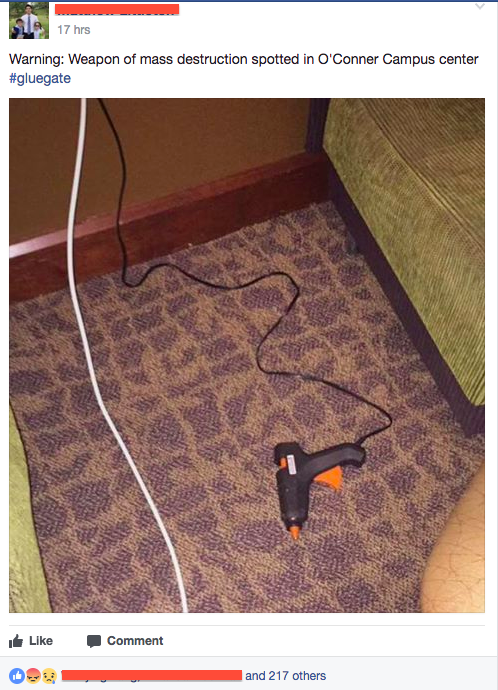 What’s the link with your sword?

I had this sword throughout my freshman year, from a friend. Every time we would have a dorm party, we would get the sword out and run around with it. Nobody ever saw that sword and said: “Hey Jenny, that looks dangerous.” Nobody has called the cops or looked at me with fear in their eyes. But it’s a legit weapon. Even when a white woman has a weapon in her hands, I’m not a threat. Because of my race, I’m not expected to harm anyone.

This student was doing a project for school with a glue gun. He’s here to go to school. I had the choice to have the sword. He’s just trying to be a student and he was profiled. The thing is, he didn’t even know he was the person in question. He gets all the texts about an active shooter like everyone else. He runs up to his car and goes back down the hill to a friend’s. He’s sitting there and doesn’t realize until police dogs come and find him, with the glue gun plugged in. 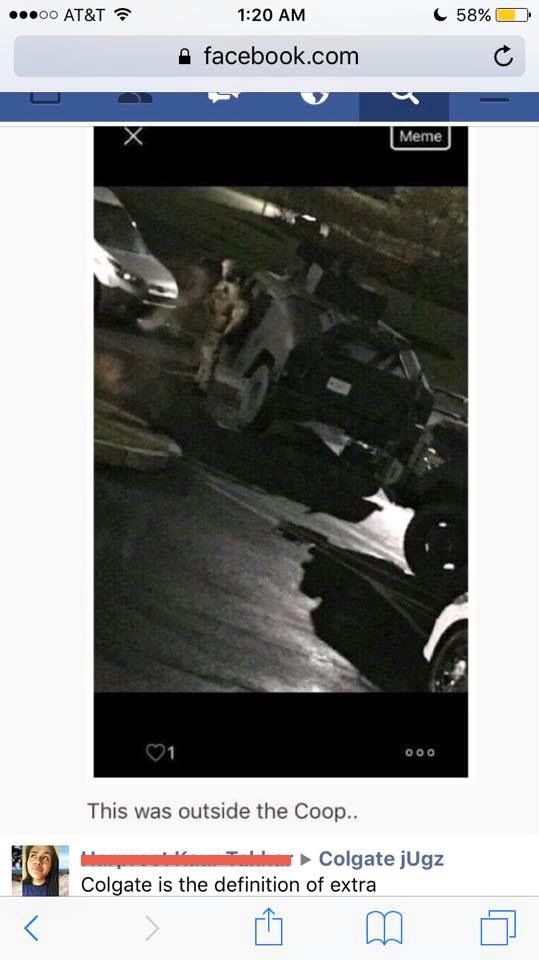 From Asians in Solidarity

What’s your take on this?

White people need to step up their game and talk about their privilege. This is such a white school where racial profiling happens every day, it’s a very racist place. This is a call on white people to acknowledge your privilege then do something about it. You have to call it out where you see it. White people need to be better and do more and stop taking up so much space.