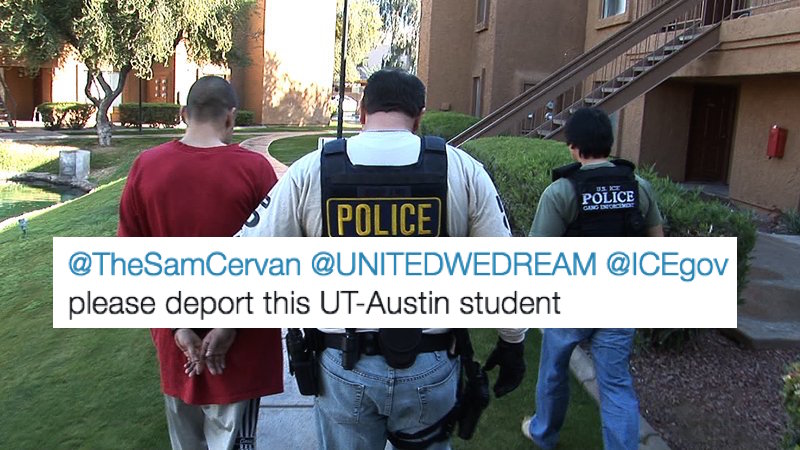 Trump fans are snitching on undocumented students to immigration officials

Fans of President Trump are now snitching on undocumented students to get them deported.

Over the past few months, undocumented students have been celebrating their early acceptances to colleges across the States, posting their results online. And in the comments, The Tab has seen numerous instances of Trump supporters commenting on their posts on Twitter, tagging the ICE handle, and uploading photos of how they reported them.

Posts by students celebrating their achievements – getting into college and succeeding in school – are being trolled by Trump voters who wish to see “these scum illegals going back.”

Undocumented SMU student to share his story at graduation @GovAbbott please send @ICEgov and a bill for this illegal https://t.co/9UxyNMWXrB

This comes after controversial far-right speaker Milo Yiannopoulos encouraged students at the University of New Mexico to report anyone they suspected of being undocumented to “purge your local illegals.” He provided the ICE hotline during his speech.

It was rumored that his canceled event at UC Berkeley would have involved publicly naming undocumented students, although he denied these reports and said they were “a total fabrication.”

Here’s the rest of what Trump supporters are doing to deport DREAMers.

.@ICEgov My cousin's dad's girlfriend says Navient is living here on an expired student visa and that they sell pills to white teens.

@TDennis17 send this to @ice re: Naeemah's student visa. Oops, wait, think I just did!

My niece was threatened by one of these scum illegals last month. 18 yrs old and a FRESHMAN! I called @ICE! He's going back! #RockvilleRape pic.twitter.com/DmXhaH8atS

.@JackPosobiec If I was @ICEgov, I would infiltrate these universities to be that student coordinator.

@FBI @ICEgov These students, likely on student Visas, are in violation of the Law. https://t.co/Ip4OOfBnp6

@ICEgov @dianizboni17 Why don't you tell me how getting rid of rule of law is beneficial? Reported.

@Lunaaa_L Just reported u to @ICEgov enjoy your deportation

I bet that @ICEgov would be interested to know you're here illegally. @ciriacisbeth

@maricelaguilar Reported to ICE. Still unafraid? Adios puta, don't let the door hit you on the way out. @icegov

Hi, @ErikaAndiola I'm just letting you know that I already reported you to @ICEgov. Have a nice trip when you go back to Mexico #Deported

@FlStuPwr @ICEgov reported. You are going back.