The fast-food giant just tweeted their disgust at Donald Trump, calling him out for his “tiny hands.”

@realDonaldTrump You are actually a disgusting excuse of a President and we would love to have @BarackObama back, also you have tiny hands.

It is not clear at this time what provoked the outburst from the corporation.

It was tweeted at 9.15 a.m EST, pinned, and has since been deleted. Luckily here is a screenshot I took of it so we can bask in this glorious moment for all eternity. 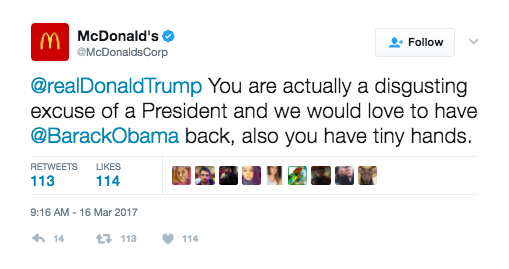 Several Trump supporters have since sworn off McDonald’s for the tweet, with one dubbing it “CuckDonalds”.

.@McDonaldsCorp @McDonalds You seriously want to go this route? Great!! You are now officially on the #BoycottMcDonalds list!

@McDonaldsCorp Never eating at McDonalds again. I support our President 1000%