These girls from Chicago’s toughest area raised $2,000 to join the Women’s March on Washington

‘This is our country, we have to take it back’

Saturday’s Women’s March on Washington promises to be an epic moment of protest at Donald Trump’s presidency from the ladies and girls of America.

Alongside seasoned activists and women’s groups will be a party of schoolgirls from Chicago who have raised more than $2,000 from their friends and families to make the trip.

Lakisha, Shekinah and Aisat – 17, 17 and 18 – go to school deep in the city’s South Side. On the morning we visited a thick coat of snow had covered the city, prettifying streets that for most of last year seethed with gang violence which made Chicago – by a huge margin – the murder capital of the country.

One of the most surprising and inspiring interviews we have done started with the girls telling us about the colleges they have applied for (right from NYU to UCLA) and why Women’s Studies is their favorite class. They said Trump’s victory and the conversations it started among their friends inspired them to book their tickets to attend the march.

We met them by chance. We were visiting their school, the Perspectives Leadership Academy, on the invitation of a friend who teaches there. It is situated a few blocks away from a section of streets that is statistically one of the most dangerous neighborhoods in America. As we drove south from Chicago’s wealthy business district the buildings kept shrinking and the roads became more and more desolate.

One of the girls’ classmates – Stephen – told us he stays indoors during the Summer months to stay out of trouble. “It’s scary now – the violence has got so bad,” he said. A few months before our visit, an English teacher was carjacked at rifle-point when she turned up to work in the morning.

From the moment we sat down together in the cavernous assembly hall, the girls gave us their brilliant, clear-eyed and often angry assessment of Trump, racism, and how they see their future in America.

This is what Lakisha, Shekinah and Aisat told us in their own words.

First we asked them about election night, and the moment they realized Trump had won

I called my grandma and told her what happened, and she said ‘Are you for real?’ And I was like, ‘Yeah he won’. She just said, you’ve got to be positive, you’ve got this.

Lakisha: When I woke up, some people were making jokes about it, saying ‘I’m going to pack my bags and go back to Africa.’ It was sad, I was like ‘Y’all taking this as a joke and this is real man. He used used this to down us and you are all trying to make it a joke. You’re all acting like he wants to portray us.’ 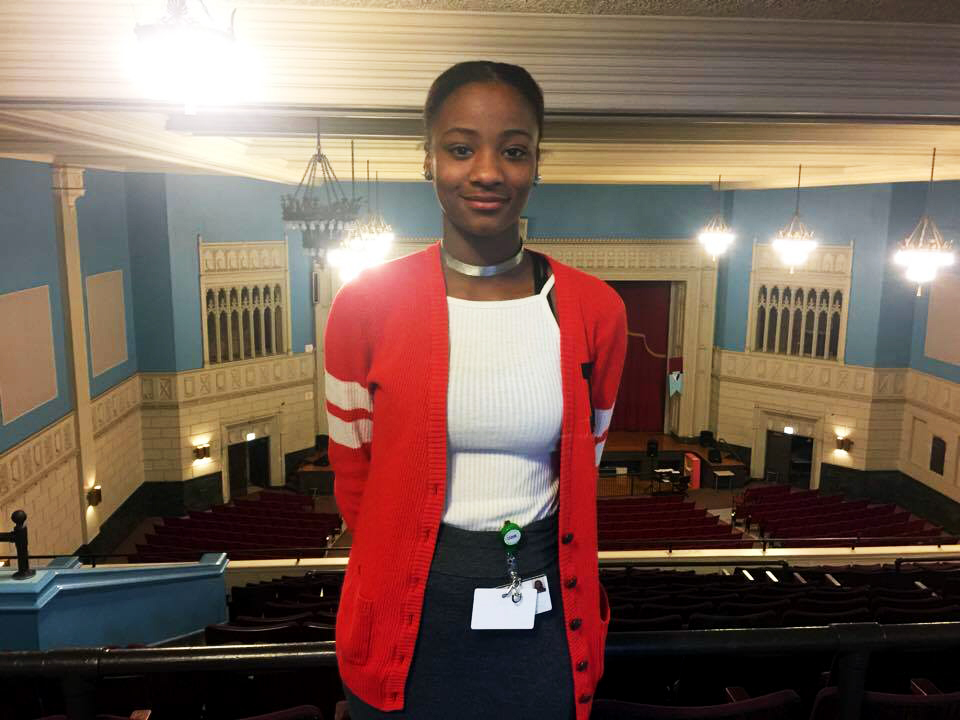 Aisat: Everyone at school was crying; the teachers were crying. I’m really reconsidering my future right now. I’m thinking of applying for colleges in Australia. I’m scared for my family – my dad is a Muslim, I have friends in the LGBT community and my friends recently found out their parents are not legal.

Shekinah: She wanted to be the female president, and that’s what I want to be one day, the first female black president. For her not to win, it was like ‘Man I don’t even have a chance’, plus I’m black. I feel now now my future in American gonna be a lot harder. I’m gonna have to prove myself to everybody now.’

Aisat: The day after the election, my robotics class all decided to spend the session talking about what had happened. We all said ‘This is our country, we have to take it back. We’ve started a GoFundMe to go to the Million Woman March in Washington. Five of us are going – we’ve raised $2000. 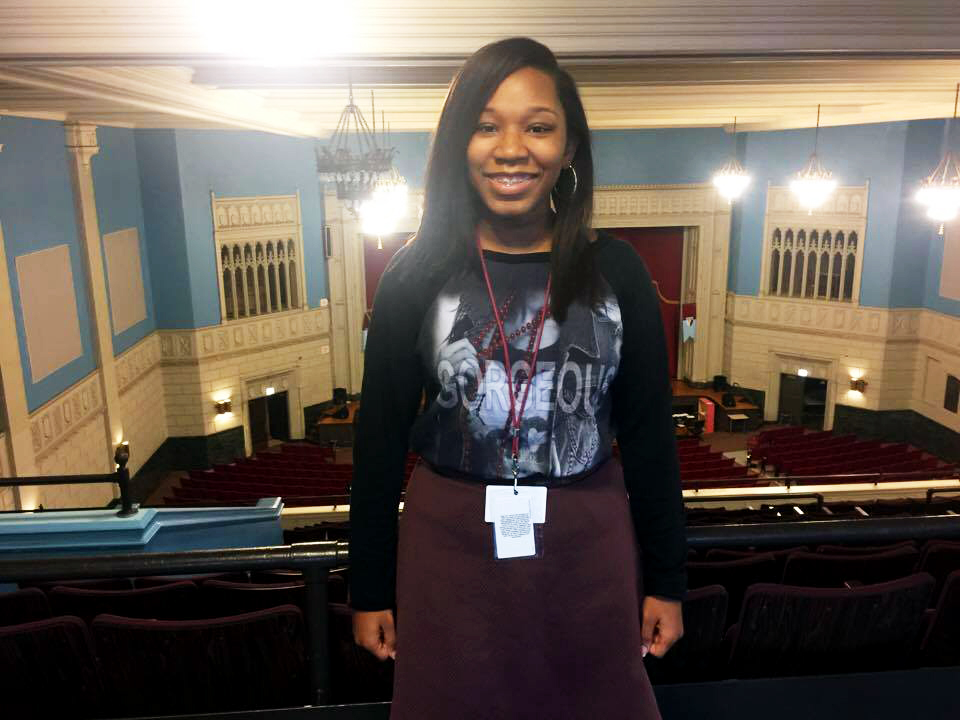 She works at a bank. She’s been working so hard at that job for 17 years and a man just got promoted ahead of her. And when she told me that I just thought, that’s not fair. She wakes up at three in the morning to get to that job and finishes at 5pm, and the fact that she works that hard and still hasn’t got ahead. And now Trump has been elected president, I feel like there’s going to be a lot of unfairness, not just for blacks but also for women too.

And they responded to Trump’s much-quoted remark about Chicago’s crime problem – that the  police need to be left to “do their jobs.”

Shekinah: We’ve had many problems [on the South Side] but that’s because of poverty. And they don’t understand how hard we’re trying but we just can’t get ahead. People always think we’re lazy, that’s what Trump believes, but we’re not, we’re trying. People sell drugs because they can’t get a job and they do it to support their family. They’re trying to live. 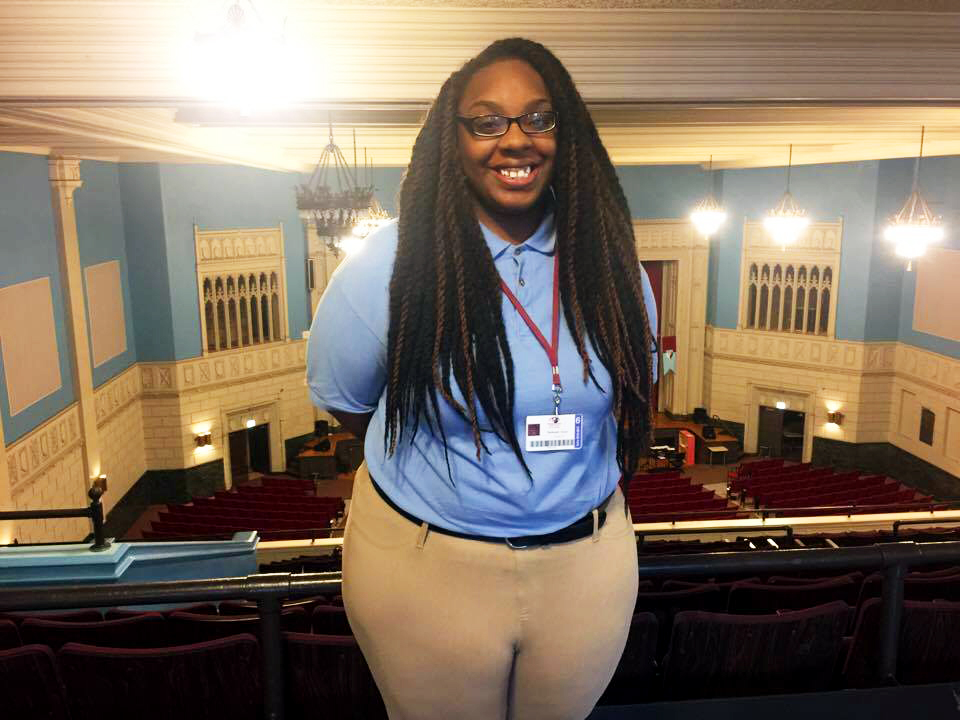 Aisat: Our school started this annual ‘I AM for Peace’ march and we march every year on the last day of school to say to our friends and family that we want the violence to stop and we want to see our friends when school resumes the following school year. Over ten of our school’s alumni, past students, and current students have been shot. I just want everyone to know what really happens. We are scared, and we want to better ourselves.

Aisat and Shekinah are going to DC for the march and you can help them, and their school friends who are also trying to pay for their DC trips, by donating to their GoFundMe page here.

If you know any girls attending the Women’s March on Washington who need help with their last-minute fundraising, please message us on the babe Facebook page so we can post their link.