75 percent of you would dump someone for supporting Trump

They’re fired from your heart, apparently

Nearly 1,000 of you voted in our poll on whether or not supporting Donald Trump was a dating deal breaker and the results are in. An overwhelming majority said that yes, supporting Trump in any capacity would be reason to break up with someone, or to not seek a relationship with them in the first place. 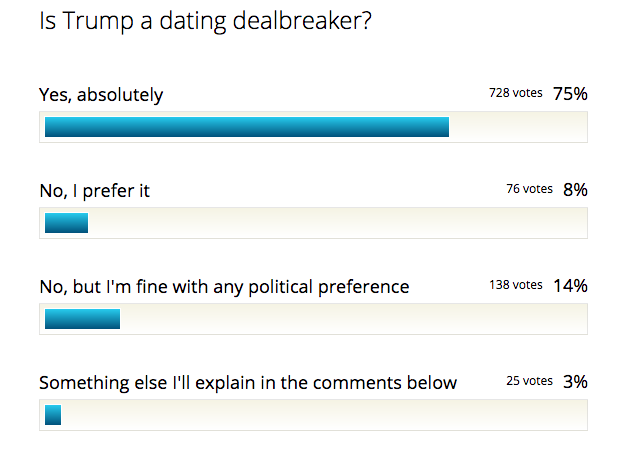 Over 75 percent of poll participants said Trump was an absolute deal breaker while just over 14 percent reported that they didn’t care either way. Only 8 percent of responses supported Trump.

The overwhelming responses on Facebook and in the comments section discussed Trump’s stance on social issues and personal beliefs and actions that would render a relationship with a supporter a nonstarter.

The idea of shared beliefs was discussed frequently in the comments, equating Trump support to a cosign on things like his admitted sexual assault.

While very few voiced support for the new president themselves, some said it wouldn’t necessarily be the end of their relationship.

Either way, maybe we should all save ourselves some time and ask everyone who they voted for immediately after swiping right.