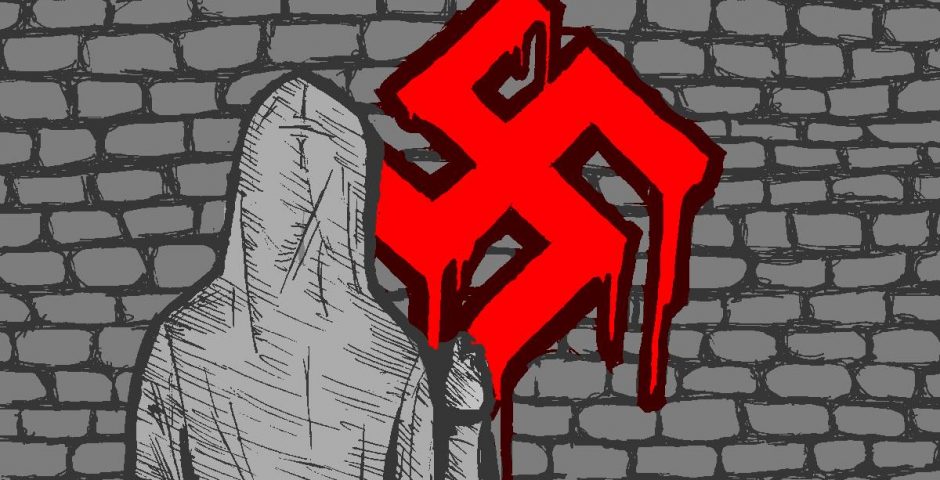 Swastikas are appearing at colleges across America – but how worried should we be?

Scrawled on walls, marked in fresh snow, taped to a ceiling. On bathroom walls in Virginia, on the gates of a frat house in Florida, a dorm in Wisconsin and in countless other places, swastikas have been appearing on campuses across America. Sometimes the rooms vandalized belong to Jewish students, sparking fear and confusion. Other times the targets have nothing to do with Judaism, picked almost at random.

Since the start of the year, there have been over 100 recorded incidents of swastikas appearing at colleges. From schools with huge populations like Rutgers in New Jersey, to those with barely a handful of Jewish students like Swarthmore College in Pennsylvania.

With the most divisive election in a hundred years rumbling on behind the shitshow of 2016, it’s almost too easy to see this as part of the rise of racist, sexist, angry white men touted by places like Mic or The Daily Beast as part of “the chaotic wake of Donald Trump’s election.” Emboldened by the victory of their racist champion, these bigots must be crawling out from beneath their rocks to tell Mexicans to go home, to roll back 60 years of civil rights progress and to draw swastikas to remind Jewish students of their place. 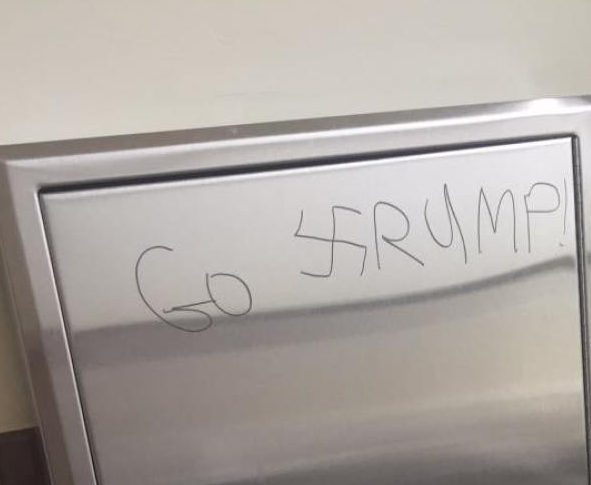 Should Jewish students be worried? Are these swastikas a sign of a legitimized anti-Semitism rearing its ugly head in the wake of a Trump presidency — or just dumb college kids doing dumb college pranks designed to get a reaction? In a lot of cases it’s hard to nail down exactly what’s happened. With vague headlines like “Jewish students unsettled,” you can understand why some people could be forgiven for thinking it’s not a return to 1930s Germany.  But is it a dog-whistle for worse things to come? 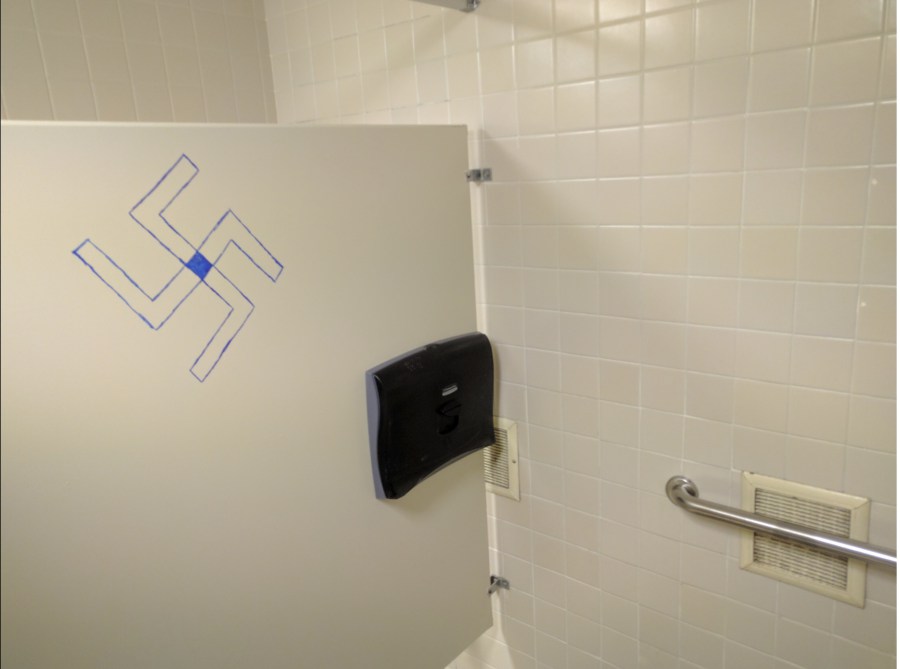 A swastika on a cubicle wall at Swarthmore College, Pennsylvania

Speaking to Jewish students, it seems like they’re not really sure either.

Aviv Khavich, a Sophomore at Rutgers university in New Jersey, has seen his fair share of incidents. As an Israeli, he’s especially sensitive to both anti-Semitism and anti-Zionism and he feels that the latter is embedded in campus culture. In his experience, anti-Semitic sentiment is much more likely to come from left-leaning social justice protesters than right-wing neo-Nazis. He told me: “Students for Justice for Palestine is pretty big on campus. And at virtually every left-wing protest Israel manages to get mentioned somehow.

“I think they see Jews as both benefiting from white privilege and as complicit in so-called Palestinian ‘suffering.’ Most of this is based on misinformation and lies, though, and they have no issue supporting groups like Hamas that expressly call for extermination of Jews.

“People like to pretend they’re just ‘anti-Zionist’ and not ‘anti-Semitic,’ but Israel is a Jewish state and Zionism is the effort to have a Jewish state in their ancestral homeland. So you end up with professors like Jasbir Puar, a Rutgers Women and Gender Studies professor, giving lectures about how Israel harvests Palestinian organs.

And it’s this form of anti-Semitism that Aviv feels is more of a threat, seeing swastika drawing as nothing to worry about. While at Rutgers, he hasn’t experienced an uptake, but feels the media are reporting on it more frequently.

He said: “I don’t really get offended by things like this, because there are very few unironic Nazis running around drawing swastikas.

“The few people that are actually doing that are usually just trying to provoke the left.”

And this phenomenon of over-reporting seems to hold at least partially true.

Oren Segal, Director of the Center on Extremism at the Anti-Defamation League, has definitely noticed a spike in reported incidents.

He said: “There seems to be a clear uptake in the reporting of hate incidents around the country, and in particular on campus. But we also are contacted directly by people with complaints of hate incidents through our website and to our regional offices. And we’ve noticed we’re receiving more than the usual number of complaints and incident reports.”

But whether this is translating into more actual incidents of violence is yet to be seen. The coverage of these events largely focuses on the emotional reactions, the feelings of hurt, confusion. Students quoted describe how they feel that “a student should never be exposed to symbolism of hate.” A valid concern, but a very different matter to acts of violence and anti-Semitic attacks.

Is it possible then, that a divisive election has given rise not to genuine bigotry, but a malicious strain of trolls? Students tired of safe spaces and tone policing hit out by scrawling symbols that they’re taught are evil from as long as they can remember. Kids on college campuses make poor, stupid decisions everyday. Often the symbols are backwards, missing branches, drawn almost completely incoherently. Are they just the Bud Light-fueled decisions of drunken sophomores at 3am? 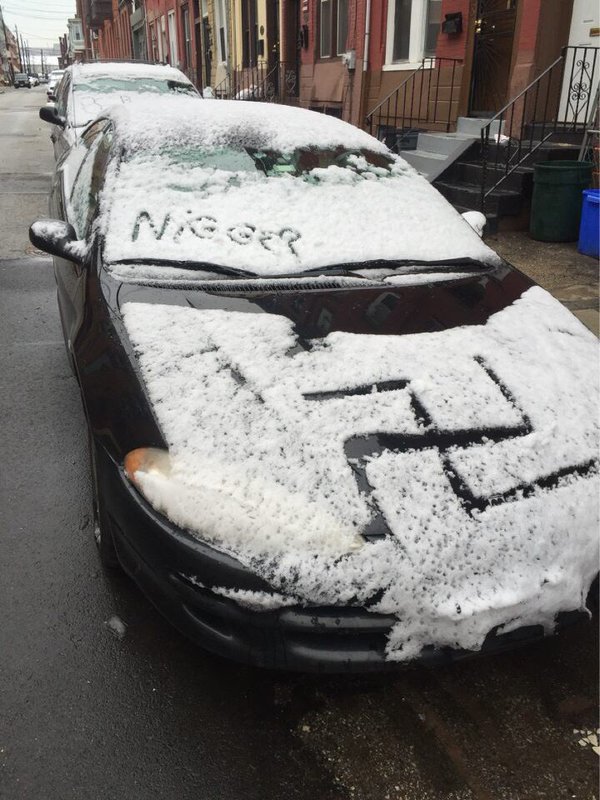 Swastika written on a parked car in Philadelphia, February 2016

A man who might know is the University of Wisconsin’s Marc Lovicott. As a member of the University Police Department, he deals with students and their poor choices on a regular basis. He said: “I’m probably an optimist, but I think the majority of the incidents we deal with on a day to day basis are students making poor choices based on alcohol.

“I don’t believe that a lot of cases are malicious, I don’t think they’re trying to cause harm.”

Asked what he thinks of the uptick in racial incidents reported at colleges across America, he paints a complicated picture. “We’ve definitely had more reports this year, but I wouldn’t see there’s been a real rise in intolerance or bigotry since the election or even the campaign.

“A lot of these things we hear about, but we can’t properly investigate. They’re either not reported to us as police incidents or the individual chooses not to pursue it.

“All we can do is make sure we use every available channel to make sure our students feel safe, and to hold those responsible to account. We always encourage our students to report everything they know or hear about.”

A few weeks ago, a student at UConn found a note with a racial slur towards Chinese people accompanied with a backwards swastika. Obviously not the most coherent racism ever seen. But despite the perpetrator’s garbled message, it still sent a worrying message to Jewish students there.

Hayley Gola, a Jewish senior studying in Stamford told me that although nothing had happened to her, the last year has made her uncomfortable in her own skin. She said: “You can’t look at someone and work out how they feel about you as a Jew, so you question everyone.

“These incidents make you withdraw into your religion.” But despite admitting she feels threatened, she concedes that many of the incidents might just be idiots trying to provoke something.

“These people have a veil of ignorance over them, they don’t understand what it means, they just want to get a reaction. And these people are almost more annoying than the racists, they’re not doing it for any reason they’re drunk or they’re on drugs.”

When discussing the longterm effects and what this means to Jews in America, she’s rather more serious. Implying that this is a pattern repeated throughout history, she thinks it would be foolish to not take it seriously.

She believes that even if they are just drunk college kids: “You can’t afford to make assumptions.

“We should be worried, it’s getting more common. Ignoring the problem doesn’t make it go away.”

It goes without saying that Jewish students should be vigilant towards anti-Semitism, and bigotry in all its forms. But when the perpetrators aren’t even intelligent enough to be coherent in their racism, when they garble together the most offensive words and stereotypes just to provoke a response, isn’t overreacting exactly what they want?