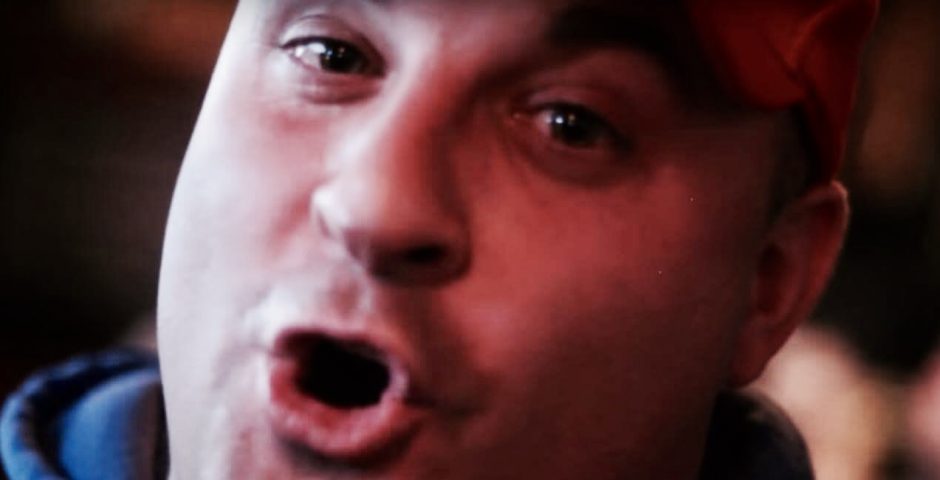 ‘Come together as one united people,’ Trump said. ‘Execute her!’ shouted a fan behind me

The party started late but picked up nicely. At 1am, the basement bar of Whiskey Trader in Midtown Manhattan was two deep with Donald Trump’s supporters, clad in polyester “Make America Great Again” hats, all drinking hard but cheering harder.

Trump needed 16 more Electoral College votes to complete his bloodless coup, and they knew it. “Sixteen more, sixteen more,” they chanted up at the TV screens. Then he added a small state to his tally and they shouted, “USA, USA, USA.”

“It’s happened,” one dude in a suit said to his friend, “I cannot believe we are watching this.”

The bar’s drunkest guy, tall and fratty looking, spotted me speaking to his friends and barged over to tell me how he felt.

The people who elected Trump – a new alliance of Americans led by a surprising turnout of rural and working class white men – will be the subject of endless scrutiny in the weeks and months ahead. Why did they support this extraordinary candidate? How did the pollsters and the political media miss them?

Those are legitimate questions, but I have a slightly different one. A week on, it’s now clear this election wasn’t about a fearsome and unstoppable new coalition of voters. After all, Trump has fewer votes in his column than Mitt Romney did, despite a sizable increase in the electorate since 2012, and more than a million votes less than Hillary.

The real story is about why America didn’t turn up to elect Hillary Clinton, and Trump’s supporters give you some clear answers on that – usually without needing to be asked.

Jon, a 26-year-old broker from LA who was wearing a gilet and a Make America Great Again cap, told me, “I think Hillary will fuck up the country more.” On top of that, he said Trump was more relatable to him. “He’s not a person of politics, he’s a guy like us,” he said. “He’s a sexist, he might be a little be crazy and compulsive. But you know what? I’m like that. And I honestly see a lot of similarities.”

After another result came in, the crowd pumped their fists and a few knelt on their barstools to drink in the room. “They said deplorable,” a stocky white guy bellowed into his friend’s ear, “DEPLORABLE!”

His comment reminded me of another Trump fan I’d met – outside a sports bar in Cleveland during the Republican National Convention. My Tab colleagues were tapping away at their laptops under the beating Ohio sun, and I was listening to Alysia Tamboubrides, 37, from Houston, who was drinking 32-ounce cans of Budweiser with her mum. They were friendly and in good spirits.

Formerly a Ron Paul voter, I asked Alysia when she started supporting Trump. “The day he said he would ban all Muslims from the United States,” she replied. She said her tax dollars were being wasted while America was falling apart. “It’s all gone to illegals,” she told me. 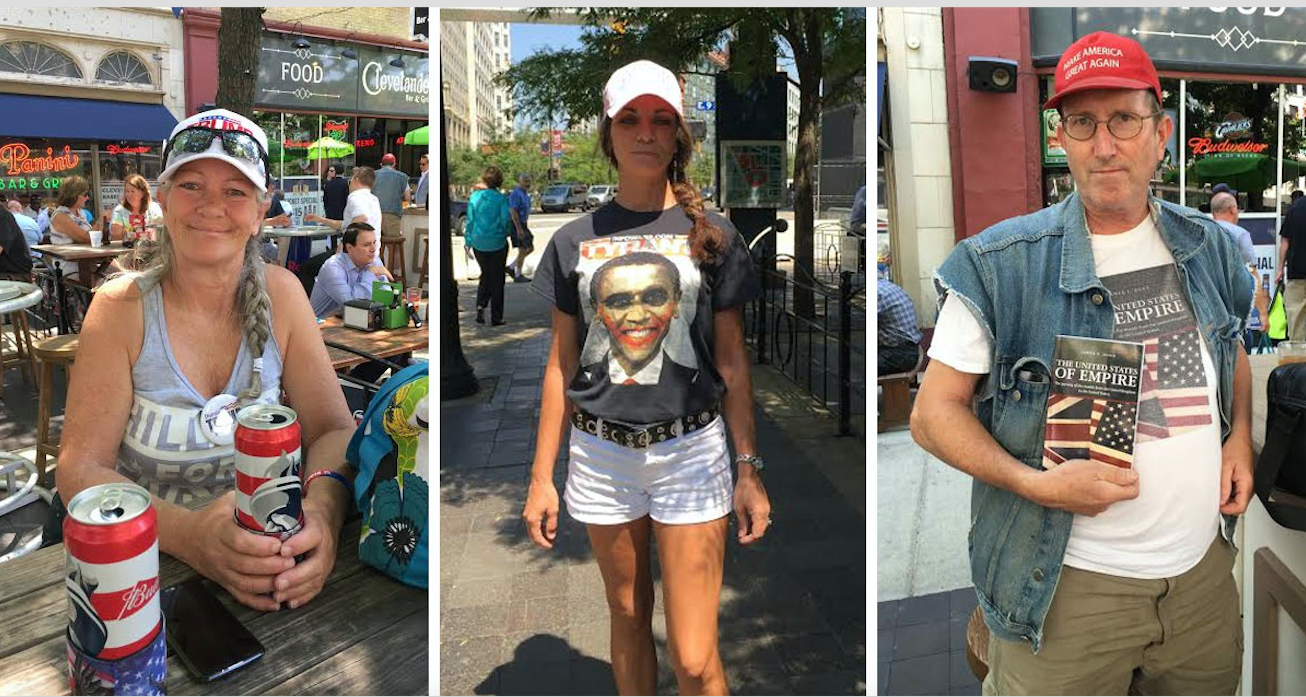 Nearby, James Dunn, 58, an amateur historian from Massachusetts, explained away Trump’s infamous speech about Mexicans (“They’re bringing drugs. They’re bringing crime. They’re rapists.”) with ease. “He’s inarticulate,” James told me. “He should have said some of them.”

Hillary would call Alysia and James deplorables, and many would agree. And lest anyone doubt their sincerity, the deplorables genuinely despise her back – a point many liberals don’t seem to compute: For whatever reason – and the reasons are legion – over 20 years these people have come to find Hillary as unacceptable a candidate for president as most of us came to find Trump.

What’s really always struck me about Trump’s supporters is how they only talk about him when you ask them to. They talk about Hillary unprompted.

In Whiskey Trader, three well dressed young guys from Pennsylvania arrived and downed a few shots. They didn’t want to appear on video talking about Trump, but their go-to explanation for supporting him was the same as the others. “After all the scandals, could you vote for her?” one of them asked me.

Hillary Clinton had clear deficiencies – secretiveness, idiotic closeness to Wall Street, lack of public charm bordering on what Toby Young once called “negative charisma” – none of which came close to the vices of her opponent. In the end she was the wrong candidate to beat Trump because she has been in the game long enough that voters could blame almost any problem on her.

Brits will recognize this phenomenon from their own political upheaval. By the time the referendum came, the EU people described was unrecognizable from the institution itself. “Europe” had assumed the role of stand-in for frustrations about Pakistani immigration in Bradford and the unfairness of French farm subsidies in the eyes of tweed-wearing farmers in Kent.

The same thing did for Hillary. To many young women I know, she was inspiring, but she was a bad candidate for a political epoch that demands freshness and a media environment that requires purity. In our anti-establishment times, Washington is the crime scene, and it doesn’t pay to be seen hanging around too long. 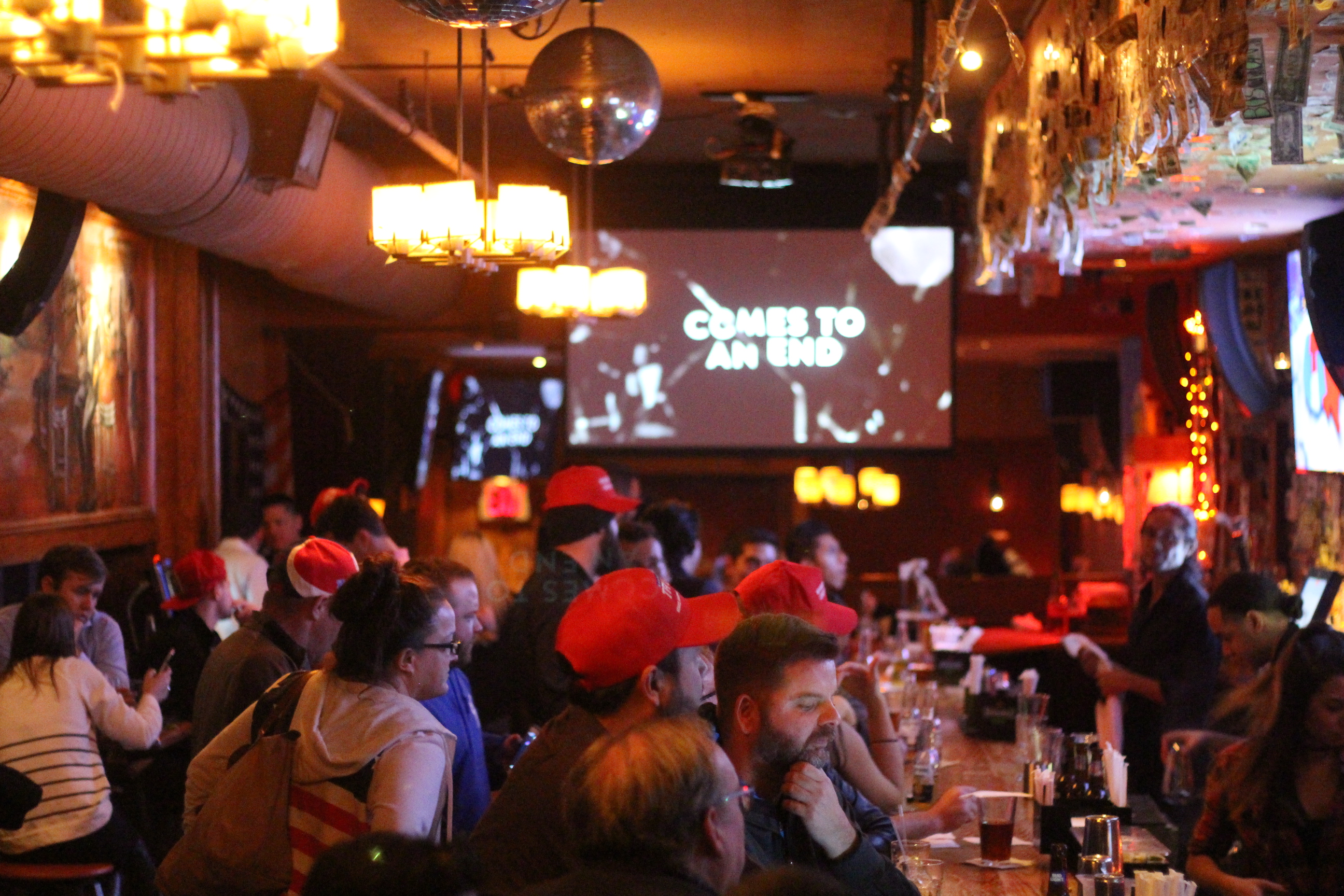 I’ve seen this illustrated many times – never more clearly than at 1am on election night.

A couple of guys from Yonkers, New York were drunkenly explaining their deep antipathy for Hillary. Then one of them got more specific. He asked me not to quote his name or film the company name on his work fleece.

Which people, I asked?

I don’t know what he meant about letting Hasidic Jews go – something about pardoning criminals, he said – and it doesn’t really matter as much as what the tangent shows: the ease with which voters like him could hang their highly specific grievances on the giant grievance peg that is The Clintons.

Worse was to come, and it came as Trump made his victory speech in the Hilton, a few hundred meters from our bar.

“I say it is time for us to come together as one united people,” Trump told his audience. “Lock her up, lock her up. Execute her,” shouted a voice behind me.

Estevan Sarmiento, a 60-year-old from New Jersey, with long hair and a rugged face, wasn’t finished there. “I’m going to be happy when the whore is in jail,” he told his friend. After the speech I asked him what his problem with Hillary was. “She’s a piece of shit,” he explained, “she needs to be executed.”

Which sounds like textbook misogyny, and on one level it is. But with Hillary-hating, there was always another layer. Always a layer that wasn’t anything to do with Hillary, but just to do with life and the perceived slights, unfairnesses and general bullshit it throws at people.

With people like Alysia and James at the RNC, I found out the real story a few minutes into speaking. With the man from Yonkers, it came out (“Bill Clinton let those people go…”) after a few more drinks, before his friends pulled him away in embarrassment.

With Estevan, a man who shouts about executing a presidential nominee in a packed bar on election night, the real thing came when I was googling his name last week. There I learned that he is a biologist, “noted for his work in primate anthropology,” who has appeared on TV and spent time as a Fulbright Scholar.

And then this detail on his Wikipedia. “Sarmiento filed a lawsuit against Queens College claiming that the college’s refusal to grant him interviews for associate professor employment was motivated by racial discrimination.” A US District Court said race had nothing to do with his rejection – other candidates were more qualified. He subsequently made a similar allegation against another university and was again rebuffed.

Only Sarmiento can say whether his politics has anything to do with his experiences losing out on jobs to minority candidates, but we can wonder. 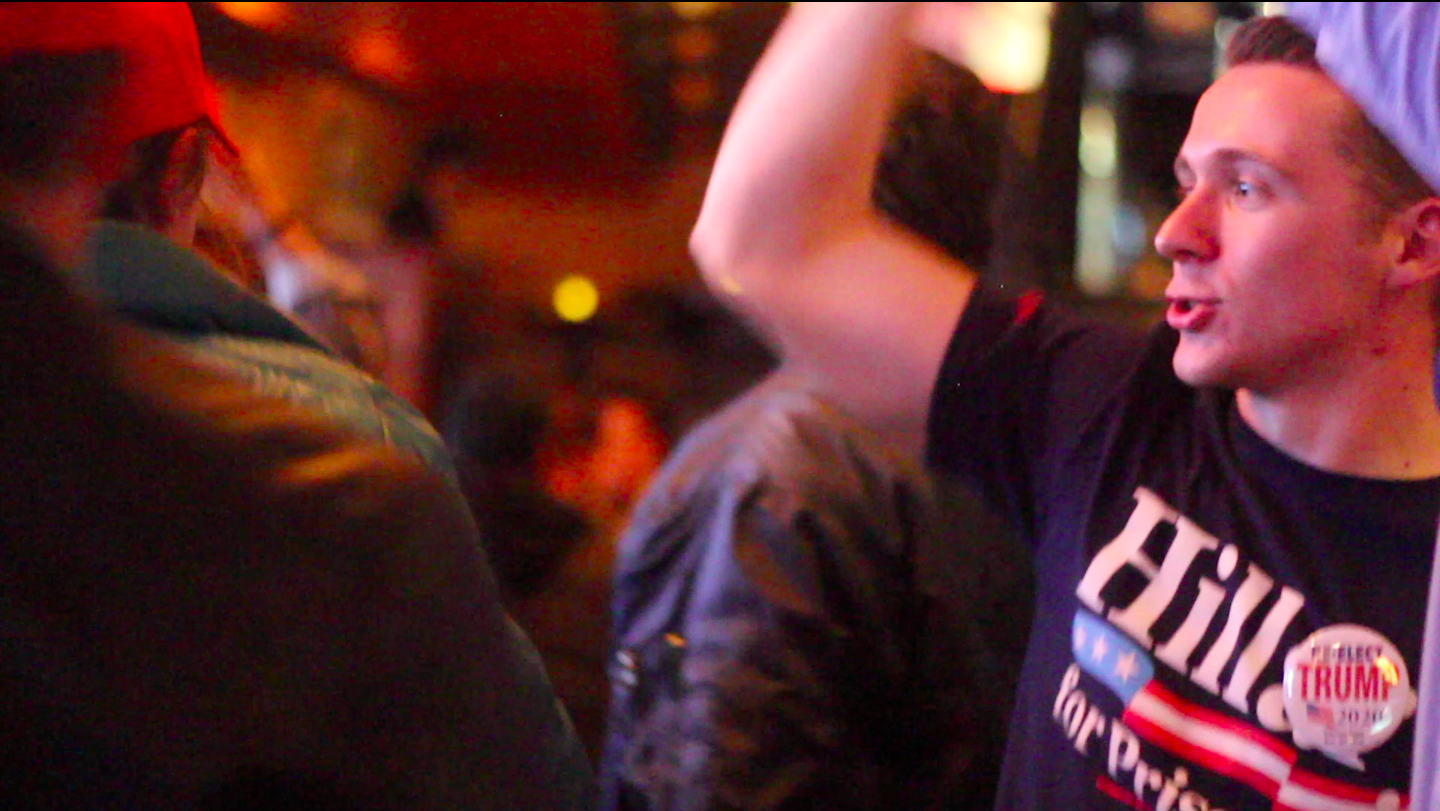 The man who rose to fame teaching America “the art of the deal” will now have to make good on the deal he struck with his electors. But the terms of the deal are unclear, and the thing his supporters agree on – the one match point in the Trump matrix – isn’t a program he can easily defund or a ruling he can appoint a Supreme Court justice to repeal in his first days in Washington.

In my experience, Trump’s supporters aren’t all racist, though a significant number seem to harbor noticeable racial bias. They’re also not all the working class victims of globalization either –  in fact some studies have found them to be wealthier, on average, than other Republicans. The Trump fans who turned out to be electorally decisive were rural and Midwestern, but his movement was well represented coast-to-coast. Some, clearly, were sexists who couldn’t abide the thought of a female leader, but it’s hard to apply that explanation to the majority of white women who voted for him.

Among the ones I met during the campaign, the only real thing they had in common was an unshakeable dislike of Hillary Clinton – the flawed but unlucky receptacle for the traumas and despairs of the new America. And now she’s gone.