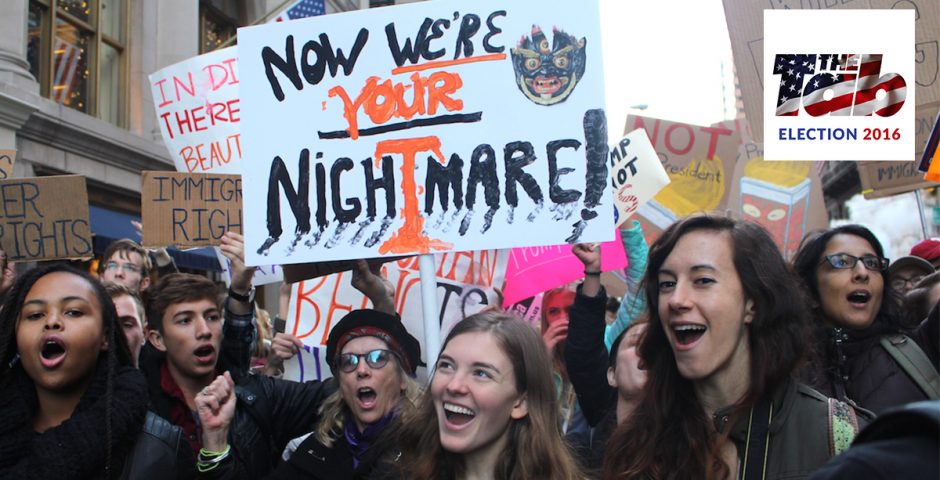 ‘We reject the president elect’

Four days into the reality that Donald Trump is the next president of the United States, and after a rash of post-election hate crimes, people are protesting across America.

Today’s “Trump is NOT my president” march in Manhattan saw thousands of New Yorkers, spanning a dozen city blocks, rally together against the President-elect. Many of them rejected Trump’s victory, citing Hillary’s lead in the popular vote, and labeled him a “fascist.”

So we followed them from Union Square, where they started, all the way up to Trump Tower. 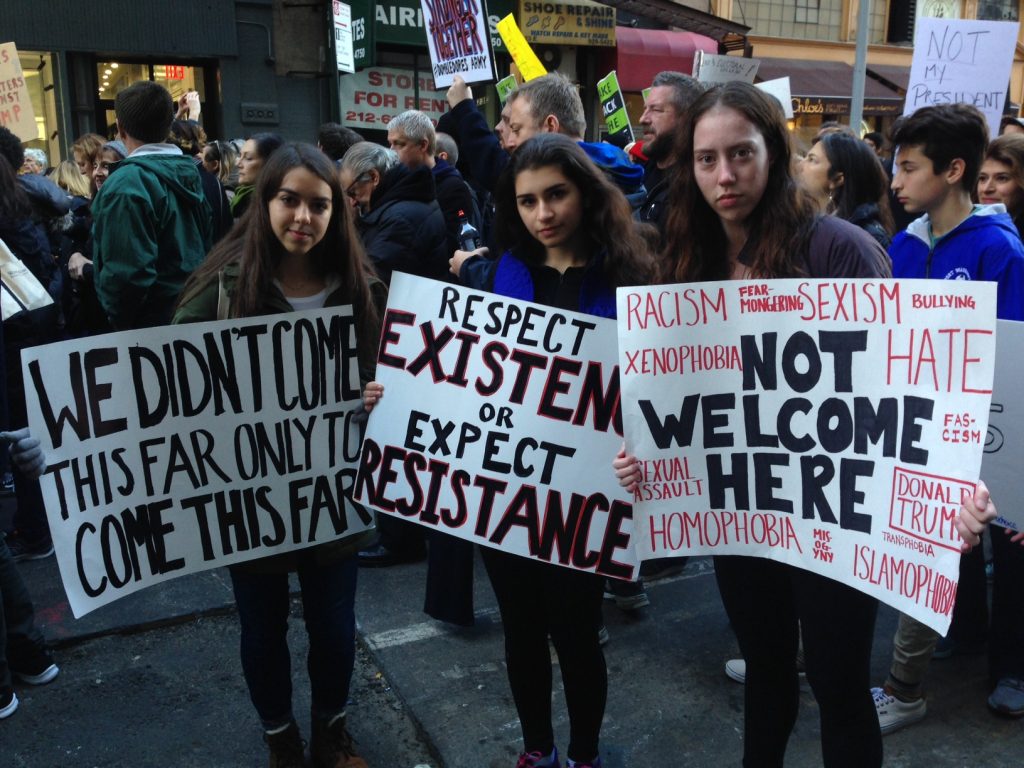 Bridget, 17, traveled down from Chappaqua, New York (where Hillary Clinton has a home) to attend the protest. “We’re devastated by Hillary’s loss,” she tells us. “We refuse to accept the hateful things that Donald Trump says. He is not a good role model.”

Joselyn, 23, says her reaction to the election was: “Devastation. Fear. After all the progress that’s been made, now we’re going back in time.” 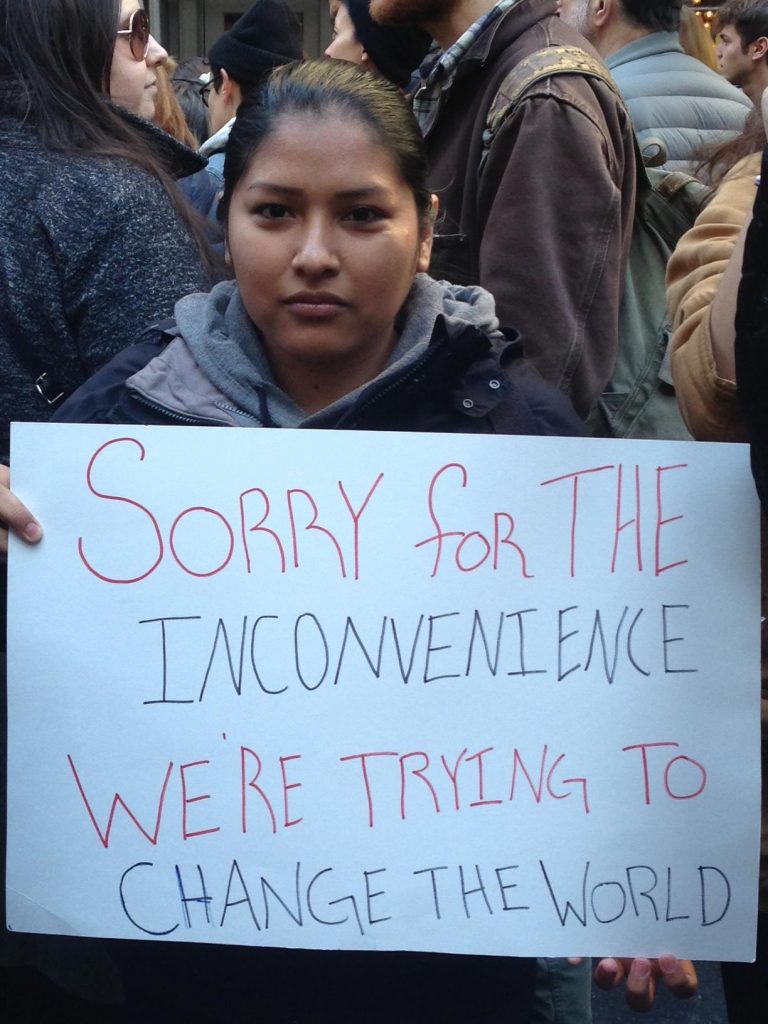 Protesters’ chants along the march up Fifth Avenue included “She got the votes,” “No Trump, no KKK, no fascist USA,” “We are nasty yes we are,” “New York hates you,” and “Hands too small, can’t build a wall.” 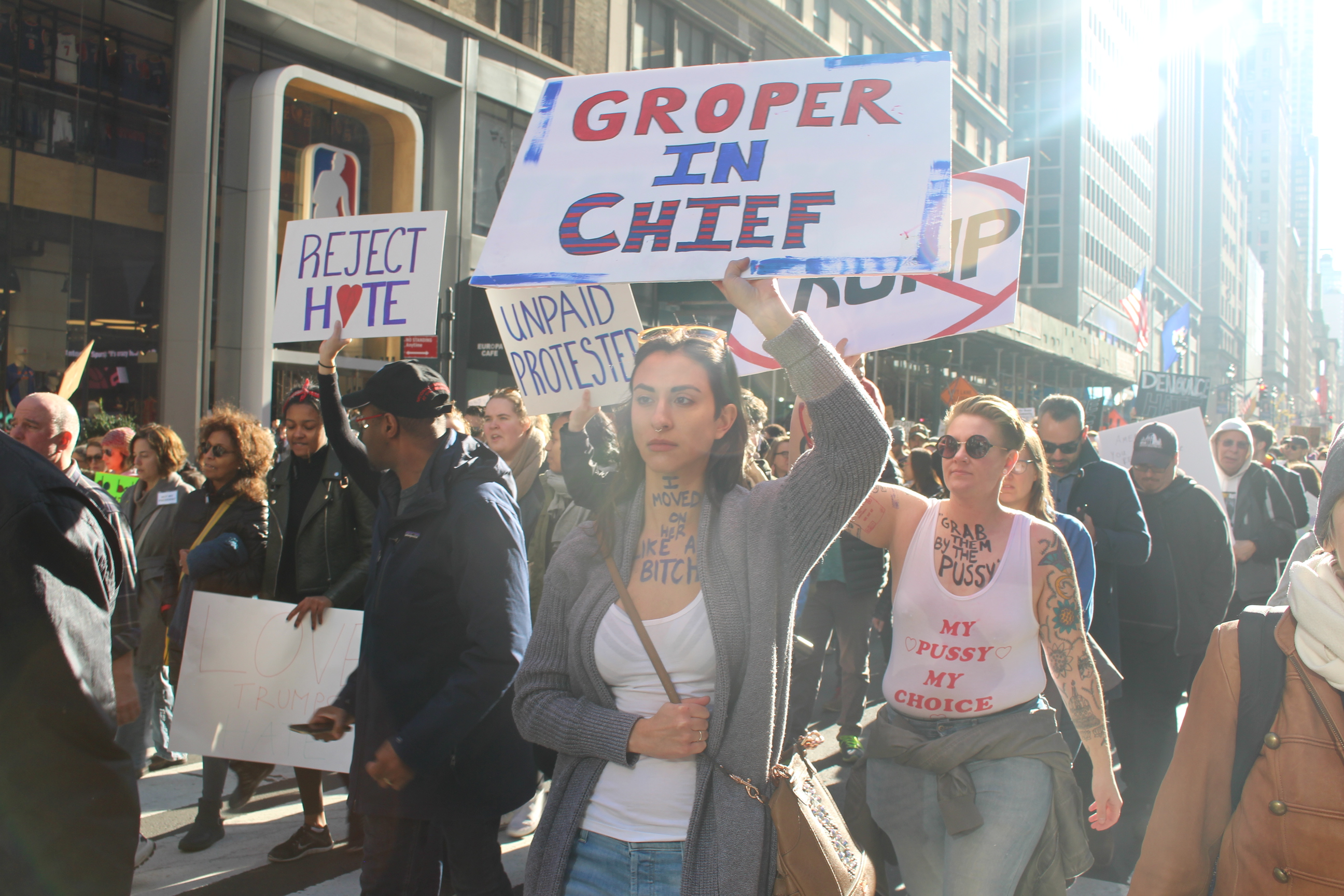 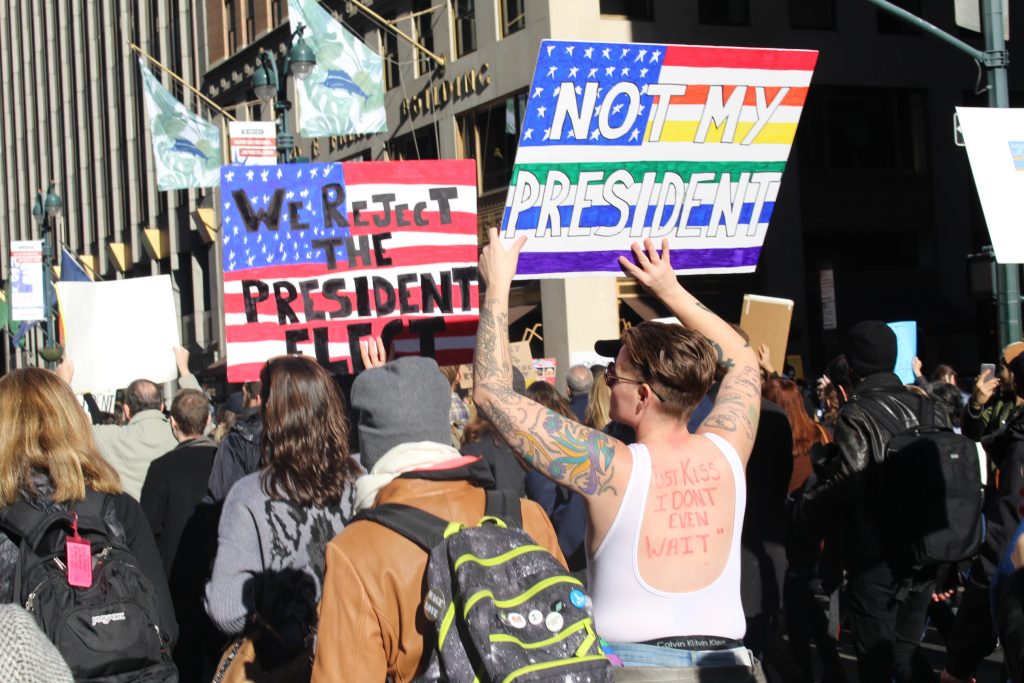 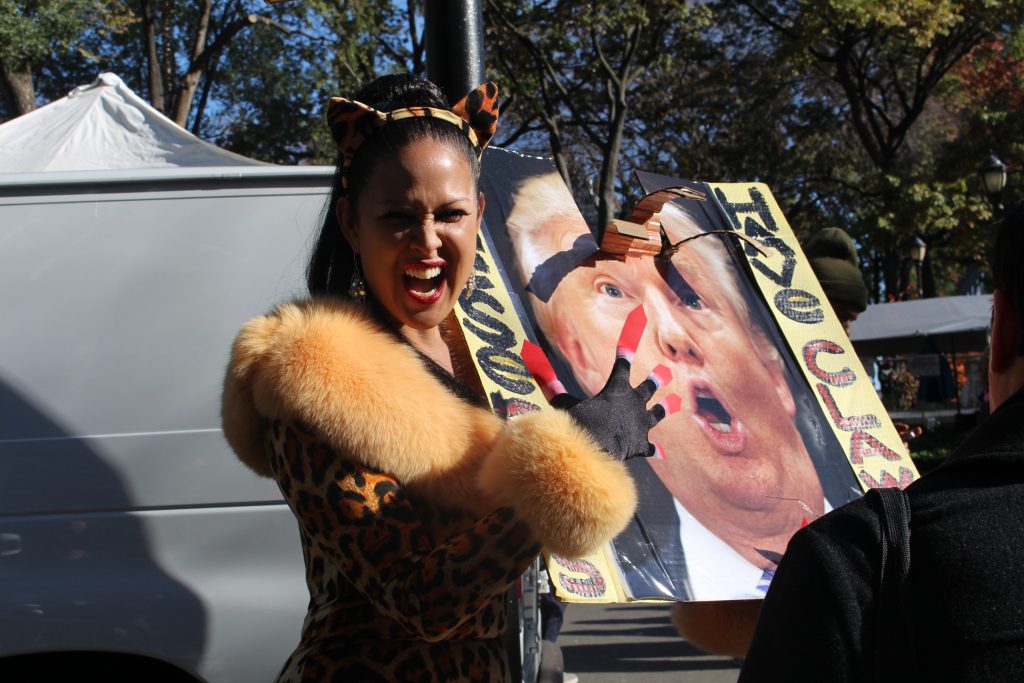 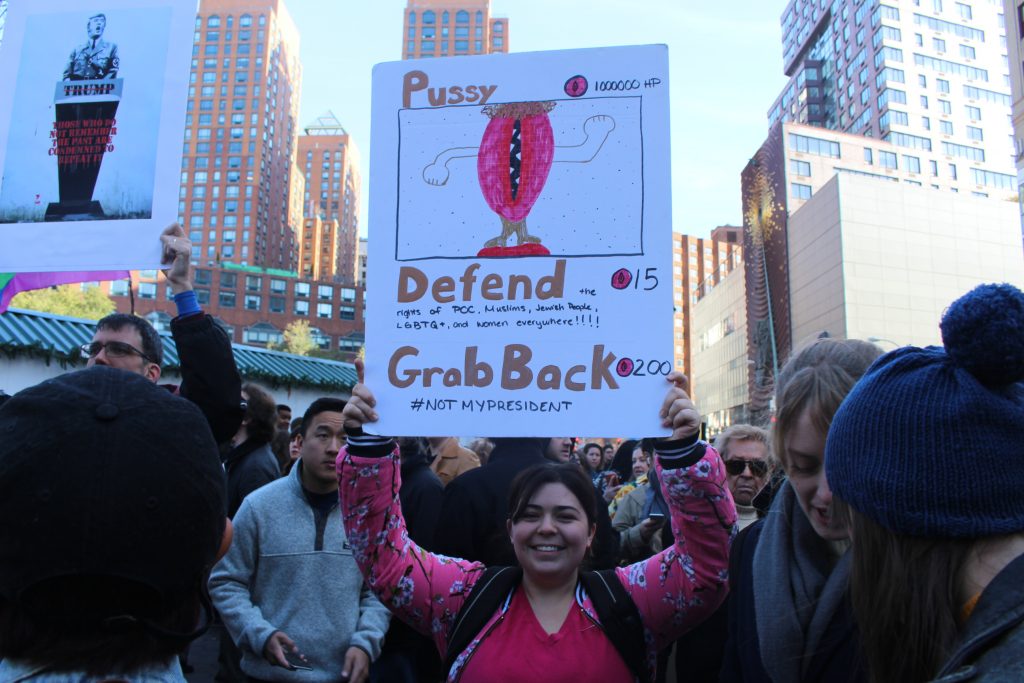 Burke, 18, holding a pride sign, tells us: “All the acceptance I’ve worked for from myself and from others, with Trump now it’s possible that it can all be taken away.” 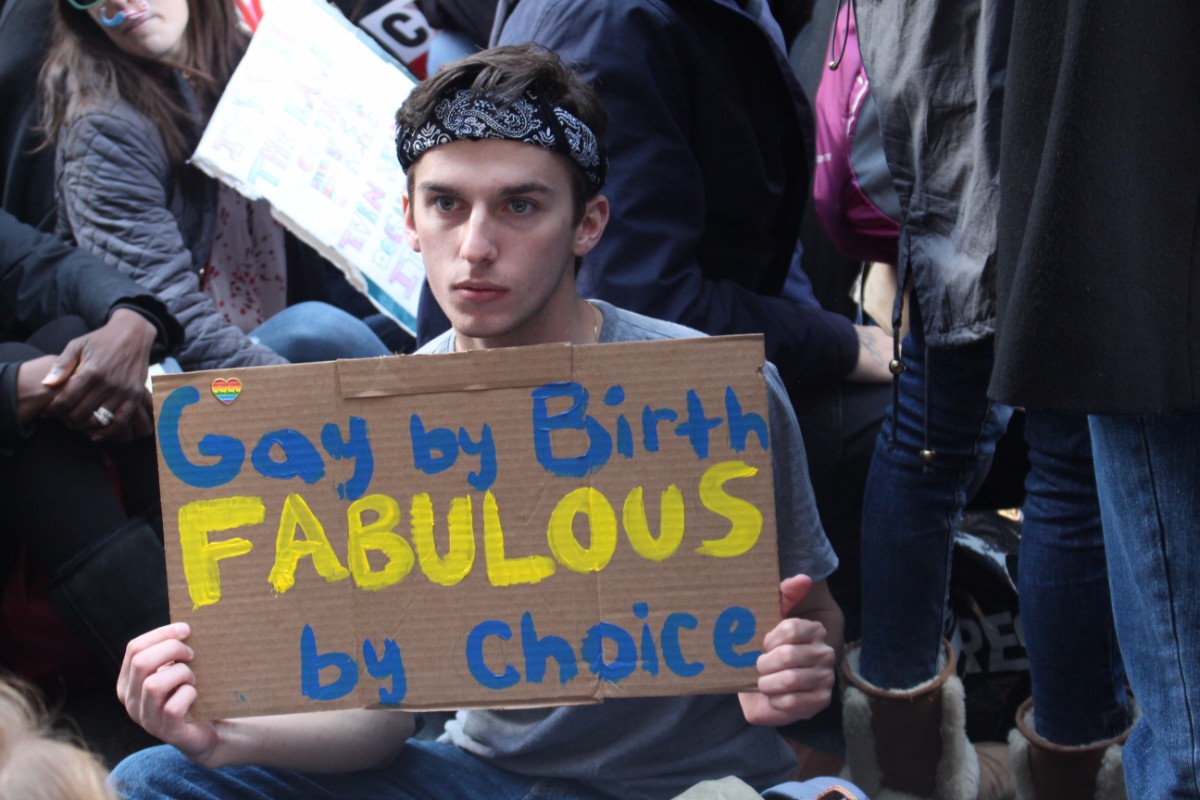 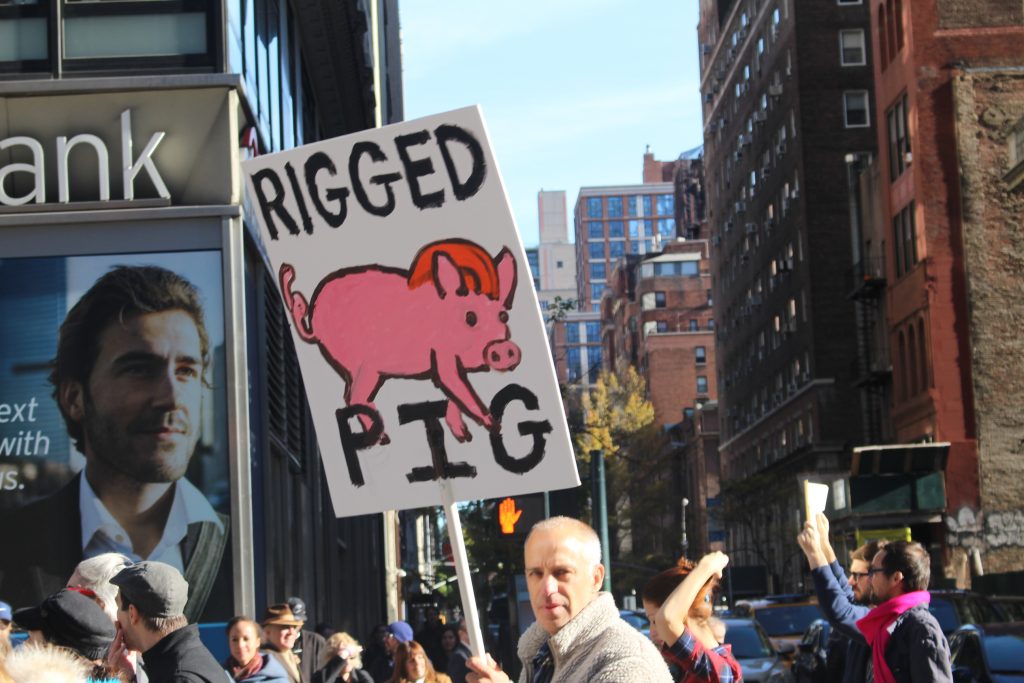 Johnson, wearing a Hillary Clinton cap, is terrified – and has some wild ideas about Trump.

“She won this election,” he says. “And a fascist has been put into office. His fascist regime will kill us. They will get rid of gay people, people of color, people with disabilities. He promised that on the campaign trail, why anyone thinks he won’t do that in office is fooling themselves. Be outraged.”

Jessica, wearing a t-shirt reading “the future is female” is next. “I voted for Hillary,” she says. “I’m a supporter of women’s rights, human rights, immigrants’ rights. And we won the popular vote. Trump will exclude half the population.” 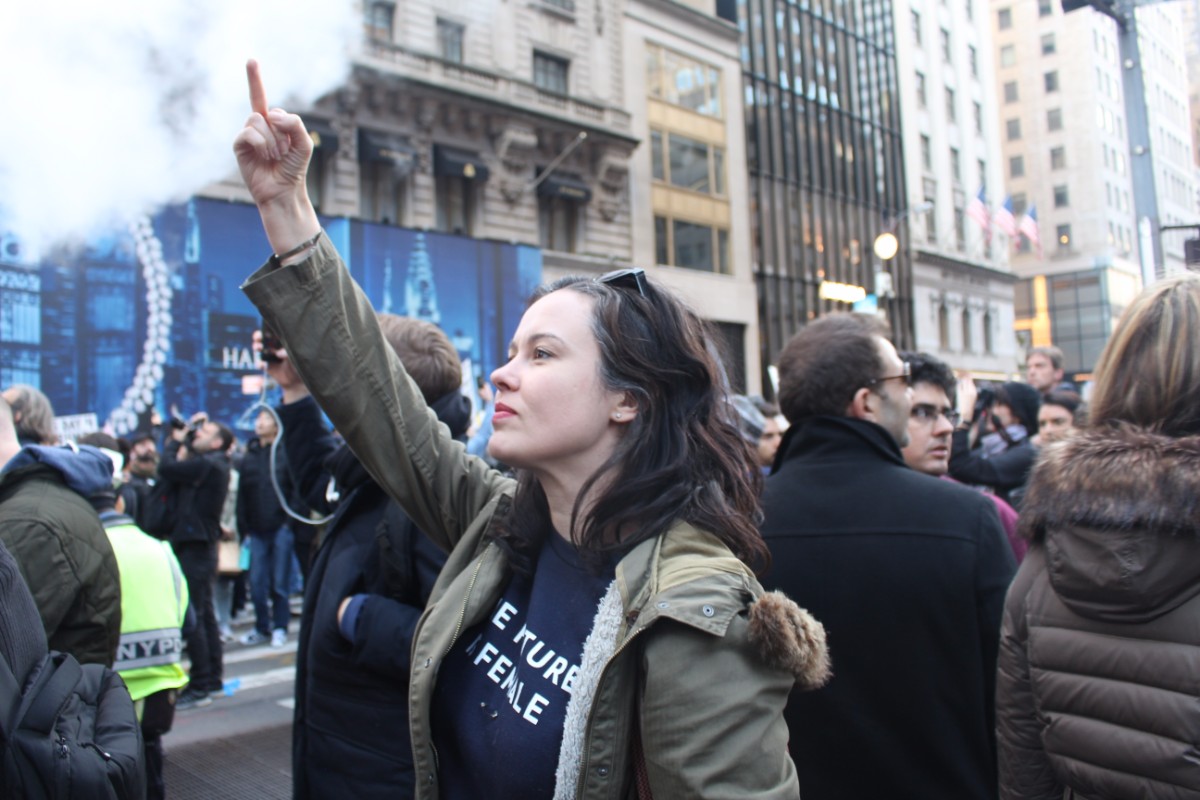 Emily and Octavio are hugging outside Trump Tower, and kiss as they pose for the camera. Why are they here today?

Emily starts. “I’m afraid Trump’s election has signaled to bigoted people that they can be open about their bigotry. We’ve seen attacks all around the country. That’s really scary. Putting Trump in office shows that’s OK.” 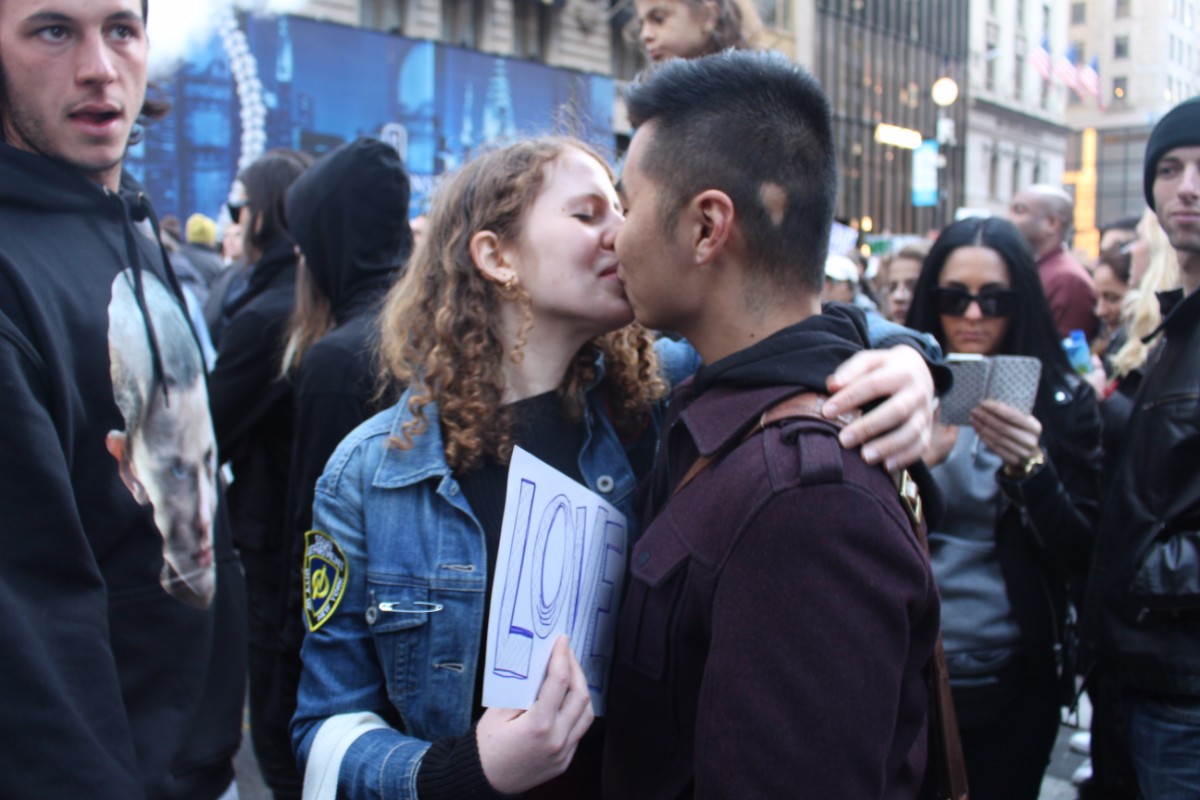 Octavio agrees. “He doesn’t know how to run a country. He has no foreign policy experience. He’s declared bankruptcy a bunch of times in his life. He ran a campaign based on hate and fear and he divided our country. Four more years of this scares me.”

A man in a Trump mask is offering photographs nearby. He’s wearing a gigantic penis outfit, and says nothing while passersby get their picture taken with him, thumbs up. Four more years to go. 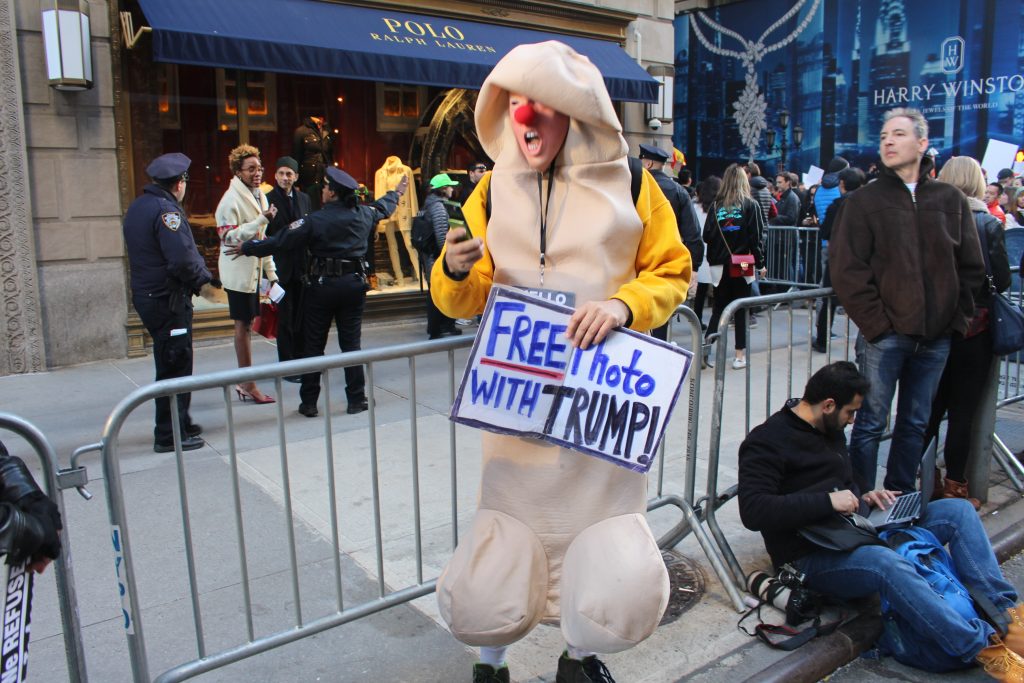