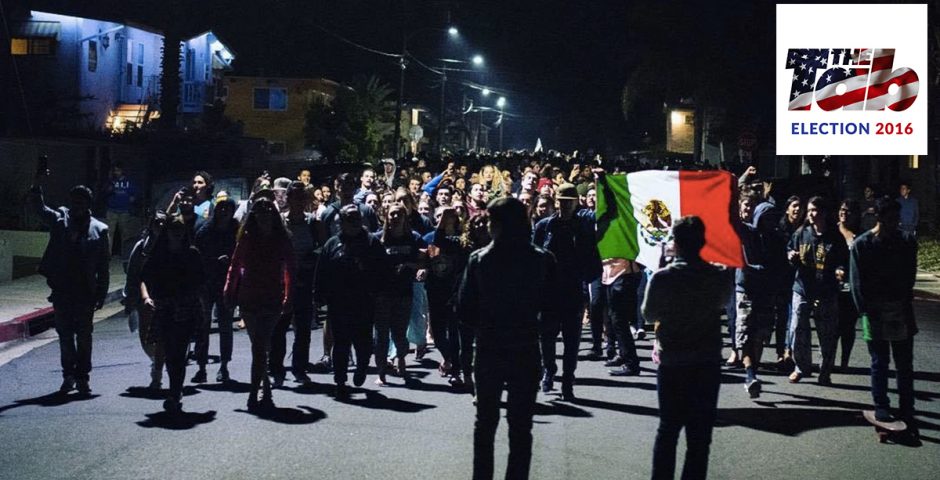 Not our President: College students fight back after shock Trump election

The kids are not alright

Donald Trump has been President-elect for less than a day- and already furious college students are taking to the streets to protest his victory.

A protester was hit by a car at UC Berkeley, where student activists chanted “not our president” and lit flares.

"Not our president"- People out on the streets of Berkeley, CA. protesting against Trump. Sigh, a little too late America…. pic.twitter.com/ZqSywDEr58

Chants of “No Trump, no KKK, no fascist USA” rang through the streets of Pittsburgh where Pitt students marched.

At the University of Oregon, hundreds of students gathered on campus, shouting “Fuck Donald Trump!”

“I’m fucking terrified of this whole thing. The mission is to raise support that Donald Trump cannot be our president,” freshman Margaret Gibson told The Tab Oregon.

“I think the whole point of this protest is to get awareness that Donald Trump just won. The whole world as we know it for minorities will be uprooted and destroyed as well as our whole economic system and morals being exposed to the world in such a bad way.”

Anti-Trump graffiti is appearing at the University of California, Santa Cruz, where Mac Miller’s “I Fucking Hate Donald Trump” can be heard playing all over campus.

Bridget Collver, a politics and history major, told The Tab UCSC: “I was supposed to be crying tears of joy over electing the first female president. Instead, I’m crying tears of anger, sadness and fear.”

Demonstrations are also taking place at UC Davis, a school well known for its activist roots.

The protests then spread further into California, with news emerging this morning of protests at UCLA, UCSB, and UC Irvine.  Hundreds of students took to the streets, burning mattresses, chanting and singing as results broke in the early hours.

As light broke, students organized themselves and created events for mass “cry-ins” and shows of solidarity with minority groups.

Back on the East Coast, there were protests in Philadelphia by Temple and Penn students, as well as rallies planned at Princeton and NYU.