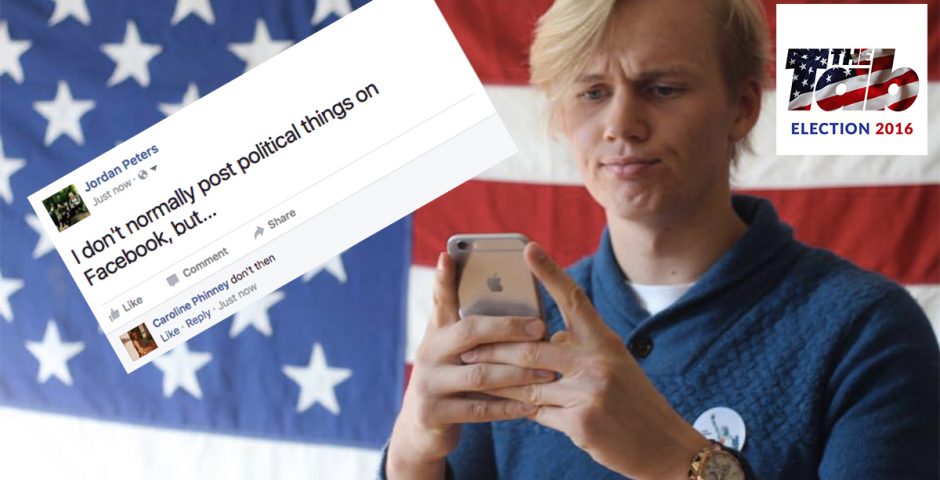 Every person you’ll see on the internet this Election Day

When will it end?

You’re sitting down, ready to watch the most controversial election in a generation, if not in the history of America, unfold. You’re ready for history to be made.

Then, after five minutes, CNN aren’t saying anything interesting, so you go on Facebook to see what’s going on.

Scrolling through your newsfeed you’re made furious by stupidity, emotional by feel good posts, and nervous by the amount of bullshit flying around.

Here is the definitive list of pretty much everyone on your newsfeed.

The one who complains about the electoral system

“Well actually if you look at our system, it discriminates against third party parties, and it means we only have a two party system. Just look at 2004, look at 2008.”

They’ll quote numbers of electoral college seats and compare them to the people who actually voted for each candidate nationwide. Two kids who did a class in political systems in their freshman year will argue about the various advantages of PR vs first past the post, pretty much just directly quoting their politics professor. They’ll drag up strange examples from European countries you’ve never heard of.

Voted. In this antiquated process where your votes don't matter, the electoral college can vote whatever way it wants. #electoralcollegesucks #2016election

Only appears in full if Trump wins. Tells stories about how he always knew Trump would win, but was keeping quiet out of courtesy. If Hillary wins he’ll come out with something diplomatic, but clearly scathing.

The same person that claims to have told you both global warming and Brexit would happen. They didn’t.

The ‘we are all fucked’

Also comments this on friends’ respective “we are all fucked” statuses.

They’ll type their status teary-eyed through their US flag face paint. They’ve know what they were going to say for weeks. Their post-election Facebook status will be perfectly worded, with every addition possible “Frank Gardner celebrating this special day with [all of his friends] at The United States of America”

The one who makes an actually funny joke

“Why can’t we all forget about the election and be friends again.”

The one who explains the issue with democracy

“Well you know it’s actually a tyranny of the majority, and also uneducated voters, but also people only look at their short term interests, and the media has too much power.” Because North Korea are setting the perfect example to accompany this argument.

The one who posts a de Tocqueville quote

“America is great because she is good. If America ceases to be good, America will cease to be great.” – Alexis de Tocqueville.

They’ll post it with no explanation and it’ll get 11 likes, three from family, the rest from people they don’t really know. Someone may call them out and just comment “pretentious idiot”

Has been lost since the beginning. Still lost. Posts an illusive photo somehow related to politics, possibly alongside a British media article.

I won't tell you who to vote for, but I will tell you to use your voice and your right to make a choice for the America you want to live in. PS: Voting third party is an option!! ✌?️?? #jillstein #imwiththeotherher

The person who has no idea about politics, but still has a go anyway

They’ll go with something safe, and clearly unfounded like “all politicians are corrupt anyway, it’s all fucked,” they’ll swear a lot to show their angry, because they feel like they should be.

“What you have to remember Sam, is…”

Sorry Frank, the last time you left your state was 1987, back down.

The one who shares literally every development in the race

“Oh my god, the mayor of Chadron, Nebraska has resigned in disgust.” “Guys have you heard, what Kiefer Sunderland said about Trump?” “BREAKING – Hillary has gone to bed after being away for 20 hours straight.”

The one who comments on everybody’s posts

“The thing about this election is…”

No one cares what they think, but they’ll tell you anyway.

The one who believes satirical articles

“OMG I didn’t know this,” they’ll cry as they post an article from The Onion. Their aunt will comment with “Shocking,” until someone who can’t hold back their righteousness will comment “I think it’s satire” 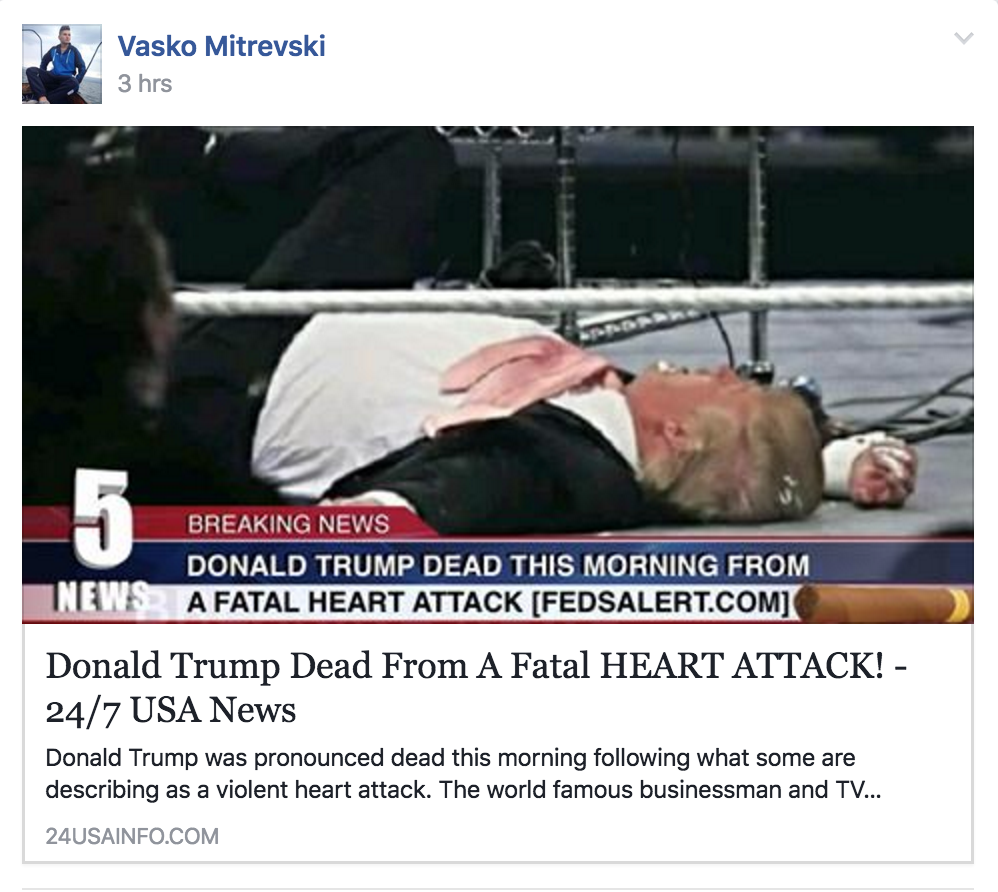 The one who shares clickbait articles

Trump Wins And You’ll Never Guess What Happens Next… – for once, true. No one could possibly guess.

The one who still believes Bernie can win

“Well actually if Hillary was found guilty of treason, and Kaine was found unfit, then it could go back to another convention, and Bernie could come out of retirement, and because the millennials and now engaged, they will vote for him, and there will be a revolution…” You won’t get to the end of their post until you decide to “Hide from my timeline” for once and for all.

But overnight, I became a leader of thought. Probably unsure of what thought that is, but sees everyone else posting so decides to go for the general consensus of their feed as it will probably muster a lot of likes. They’ll also promise to keep it short, only to post 250 incomprehensible words.

The one with the conspiracy theories

“If you translate Trump’s speech into Wingdings, the most common symbol is the triangle, which is also the symbol of the illuminati. Coincidence? I think not”

“Did anyone else see the blonde woman behind stage at Hillary’s party, that’s her body double, I know because my friend’s cousin works there.”

How i feel when i see people proud of being part of the circle of opression and voting for their new master. Stop being like every other rat in the maze. Cool story, they don't care about you. They're all the same. Same eagle, different wings of shit. ??? #Freakshow #Fuckemall #presidentialelection #ivoted #Voteordie #Tyranny #Opression #hillaryclinton #donaldtrump #neverhillary #Nevertrump #Voting #Unitedstates #Riggedsystem #taxationistheft #government #Partylikeits1776 #hillaryforprison2016 #makeamericagreatagain

The one who claims it was rigged

Of course, everyone knows Trump and Clinton are friends from a long time ago and they’ve been communicating in secret. Also the media was biased from the start, and there all the information that hasn’t been reported.

The one who fights with everyone

They’ll pick a fight with everyone just for the sake of it. They’re probably an international relations major, or at law school, but they definitely think they’re far smarter than anyone else. 114 comments later, they’ll agree with the person they’re fighting with that they were making the same point all along.

Can’t we all get along? Meow.

“Let’s all remember that every reason anyone could possibly be upset by any outcome of this election is down to the media. They have cheated us and we should be angry, here is why: [insert link to a Huffington Post blog]”

All they did was post “Damn, looks like I’ll have another beer,” and they’ve got 150 likes. People are tagging their friends, and even sharing it. You’ve spent all month crafting the perfect status and only Aunt Susan has commented.

The one whose views don’t match their newsfeed

They’re 19, at a liberal arts college, and from New York, but they’re a die-hard Trump supporter. They post three hundred words about why they love Trump, and they are thrown to the lions. Good luck my friend. If only you grew up in Grundy, Virginia.

“Can someone let me know when it’s safe to come out. See you on the other side.”