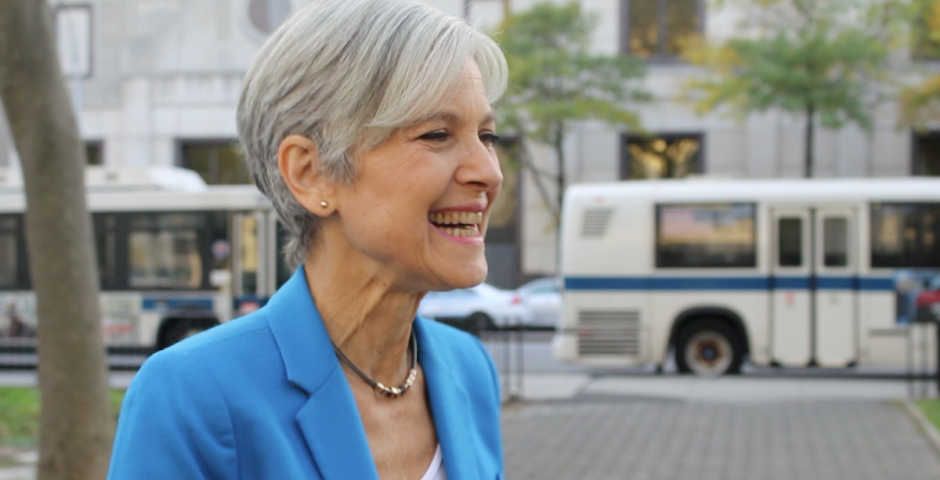 Jill Stein is polling at four percent. But she says she’s staying in the race

‘If millennials mobilized, we could take over this election’

We met Jill Stein, the Green Candidate for president, outside Hillary Clinton’s campaign headquarters in Brooklyn, a two fingers-up at her opponent.

A week ago this would have been an interesting interview, but it might have felt a bit peripheral to the main election story. Hillary was comfortably ahead in most polls, and no one was discussing Jill Stein and libertarian Gary Johnson as much.

Then the Great Tightening happened, and the polls narrowed. And suddenly the number of votes accrued by third party candidates feels very relevant indeed.

Averages have had Jill at about two percent recently, but the latest New York Times/CBS News poll released this week has her at four percent. That’s more than the gap separating Trump and Clinton in the same poll.

I asked her if she is willing to instruct her voters to back Hillary in key swing states. She said no.

“It is a race to the bottom with the greater and lesser evil,” she begins. “I urge people not to throw their vote away on the same political system that has thrown you under the bus. It’s very important to invest your vote in a real movement for change.” 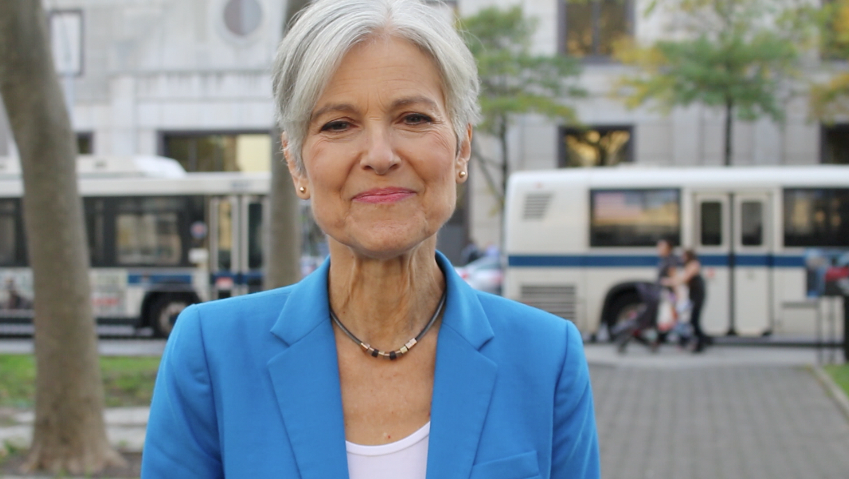 Even in crucial states where Green votes tactically given to Hillary could stop Trump from getting to the White House, Jill is adamant.

Ask her about why she doesn’t like Hillary, and she’s off: “I will not sleep well with Donald Trump in the White House, and I will not sleep well with Hillary Clinton in the White House. Hillary Clinton may have a much friendlier demeanor, and a certainly less overtly racist and anti-immigrant look. But while the Republicans are the party of hate and fear-mongering, the Democrats are the party of deportations, detentions, and night raids.”

While we’re on the subject of conspiracies, it’s worth pointing out Jill has raised her own concerns about a number of topics – 9/11 (“a new inquiry is necessary”), vaccines (“real questions needed to be addressed”), even WiFi (“red flags about possible health effects”).

Jill takes the subway (she was 35 minutes late for our interview, which could have been a ruse to prove she takes the subway). It’s the kind of character point that could help her with the student vote, where she spotted an opening among those unenthused by Hillary and scared of Trump.

Despite the polling, Jill remains convinced that she can win the presidency – and says it all comes down to young people. “We know we have the votes right now to win this election,” she tells me. “If millennials in debt mobilized and got the word out and said ‘come on out, now is the time,’ we can win it. There are 43 million young people – if word gets out among them that they could take over this election, they could actually do this.”

The mystical youth vote appears every election – back in the 70s it was claimed young people could unseat Nixon (they couldn’t) and more recently win Bernie Sanders the Democratic nomination (they didn’t). But Jill is confident she can entice a generation of young people involved in progressive causes. The protests at Standing Rock, which oppose the construction of the Dakota Access Pipeline on Native American land, are Jill’s cause célèbre – and one that she sees as a path to victory.

“Standing Rock is a microcosm of our struggle for water, for land, for indigenous rights, for our democracy and our right to protest, and our climate. It’s very exciting to see people mobilize around that. The key is that it’s millennials who are leading the charge on all of these struggles, and always have been the ones who lead the way on social issues. The gateway issue here is liberating a young generation from student loan debt.” 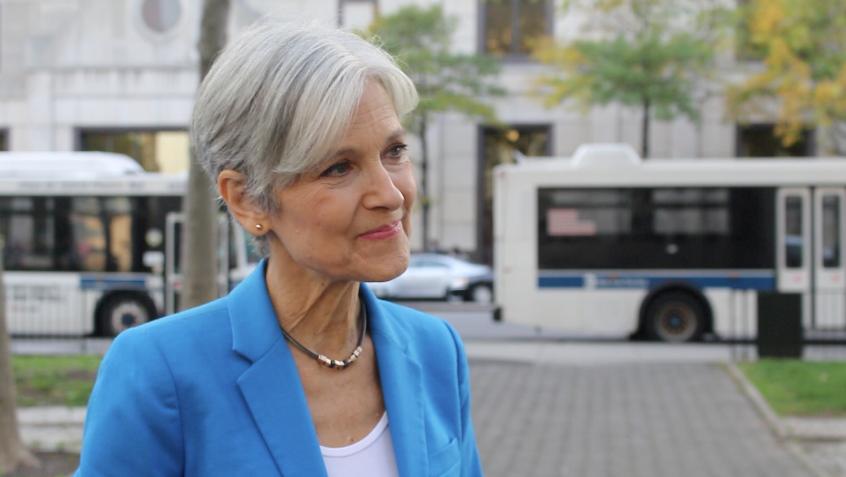 Despite the statistical unlikelihood of election – if you’re reading this in New York, you are more likely to have genital herpes right now than see Jill Stein elected President – Jill says she is “absolutely” looking forward to taking office. With a straight face, she tells me: “It would be a peaceful revolution in our time. It will be full of struggle.”

She’s so confident of her success, that she’s started planning what she’ll do with the White House: solar panels, and an organic garden. “I would love to explore community gardens in the grounds,” she adds. How charming.

On which world leaders she’d call up first as president, she’s on less firm ground (a similar question gave Gary Johnson his second car-crash interview, after not knowing what Aleppo is). She eventually settles on Bolivia’s Evo Morales, Ecuador’s Rafael Correa, and England’s Jeremy Corbyn (“who I regard as a world leader” – even though he remains unelected).

A parting shot at Hillary before we finish: “We just need not to let our guard down and to be deluded into thinking that Hillary Clinton is going to solve this crisis.”

And with that, we’re done. A man who has been watching us speak immediately approaches her to say how much he believes in her, and thanks her for running. One down, a couple hundred million more to go.