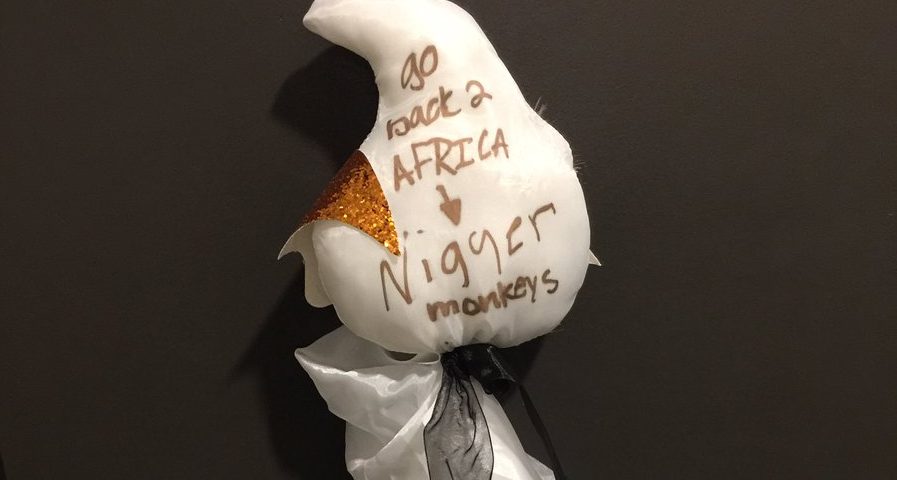 Someone hung a racist Halloween decoration outside LSU student dorms

A Black student at Louisiana State University was racially targeted with a Halloween decoration in her college dorms this week.

Clarke Perkins, a student at LSU from New Orleans, posted a photo on Twitter of a doll left outside her room, which read: “Go back 2 africa Nigger monkeys.”

This was left on my apartment door today at University House. Absolutely disgusting. pic.twitter.com/aBdjH8gRF1

The student reported the incident to their university and received a swift reply from LSU President Fieldon King Alexander, which read:

“I am so sorry this happened to you. University House is a privately-owned, off-campus property outside of LSU’s control, but does not mean LSU cannot take action.

“The Baton Rouge Police Department is currently investigating the crime. If the culprit is not a student, we will contract the district attorney for swift action.

“If an LSU student did this, they will be persecuted under the Student Code of Conduct, with ramifications including expulsion. Let me be clear: LSU will not tolerate this behaviour.

“Your safety and security is our priority. We’ll discuss further when we meet later this morning.”

Clarke said on Twitter she was pleased with the university’s reaction, posting: “They aren’t taking it lightly.”

I'm extremely pleased in the manner @lsu is handling yesterday's hate crime against myself and my roommates. They aren't taking it lightly.

Clarke speculated she was the target of the hate crime because of her vocal support of the Black Lives Matter movement online and in the LSU student paper, The Daily Reveille.

This comes just days afer someone spray-painted “fuck niggers” on the NAACP wall at Duke.