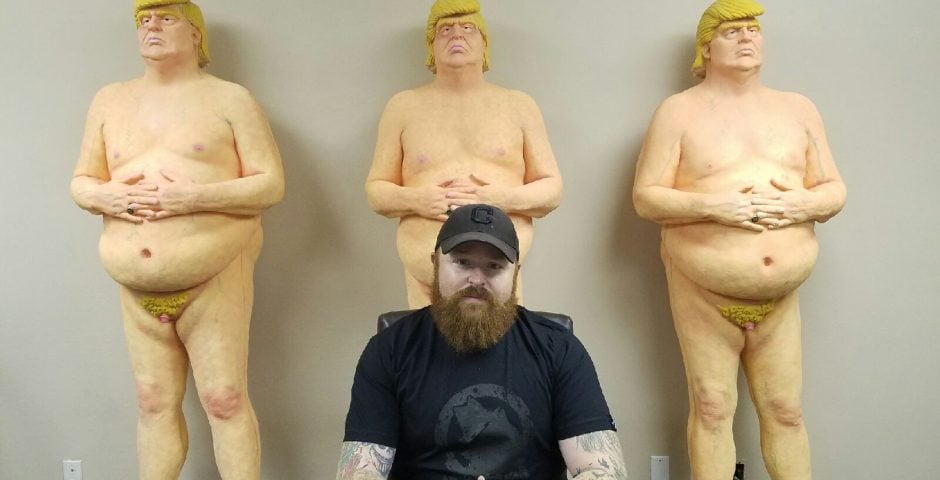 Meet the sculptor behind the naked Donald Trump statues

‘When I first started I was actually wanting to vote for Trump, because there were certain things he says he stands for I agree with’

Today, in New York’s Union Square and four other major US cities (LA, San Francisco, Cleveland, and Seattle), a naked statue of Donald Trump titled “The Emperor Has No Balls”, was erected (unlike his tiny flaccid penis) and quickly taken down.

The creator, Ginger, an artist originally from Cleveland, OH, discussed the project with us. 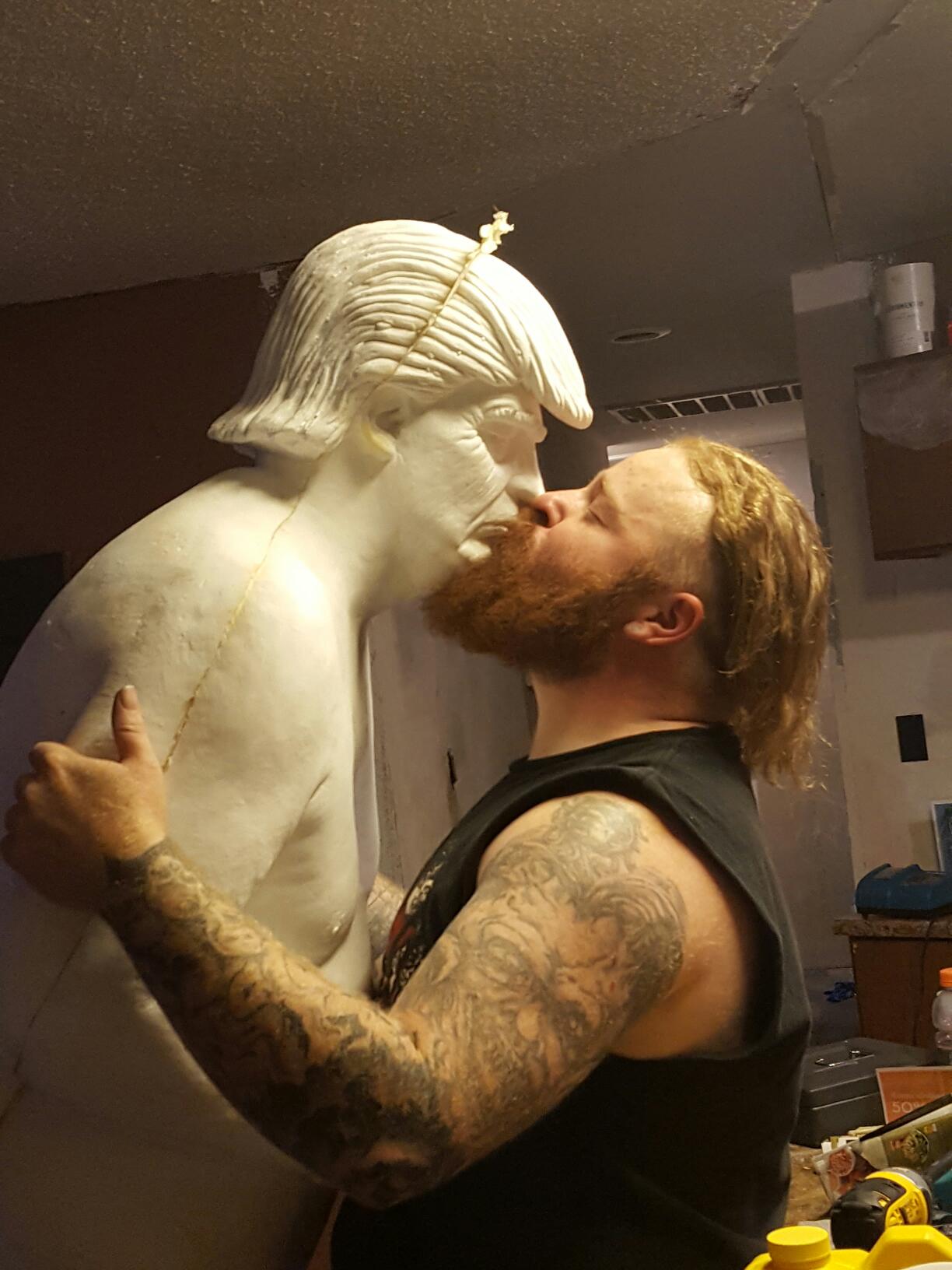 Could you explain your background?

I’ve been doing haunted houses since 1999, and after a while I became good enough to be invited to speak at haunted house conventions. I worked at the number one haunted house in the nation, Netherworld. I learned a lot from some really amazing artists. I was the director of Eli Roth’s Goretorium. The INDECLINE people were looking for someone who could make this project come to life, and one of my friends from Cirque Du Soleil put them in contact with me, and I said I would be happy do the project.

What was INDECLINE’s criteria for the project?

The criteria was he had to be naked, they wanted it to be pretty life-like, they wanted him to be chubbier than he is in real life, not that we were fat shaming him in anyway, you know he’s not that fat, and I’m not a skinny guy. He had to be in a regal, presidential stance. He had to have absolutely no testicles, and he had to have a very small manhood. There were a couple little things I personally put my artistic twist into and that was the saggy man bum, I was very proud of that ass, and the mason ring.

It took about four months to create this project – can you talk me through it?

The original sculpture is made out of Monster Maker’s clay, and weighed around 700 pounds. I had to sculpt every wrinkle and detail, and once I had every detail done I had to make a giant two-piece silicone mold of that sculpture. The statue you actually saw only weighed about 80 pounds, and was actually designed to be destroyed.

So you knew these statues would be destroyed?

I’m kind of heartbroken actually, the thing that upsets me the most is I did this project pro-bono. I own the mold though and I’m hoping we can sell some in the aftermath, but I told INDECLINE the only way I am going to do this is if you guys put one up in Cleveland, Ohio because that’s where I’m from. I’m heartbroken that was the quickest one to be put up and down with minimal fanfare. 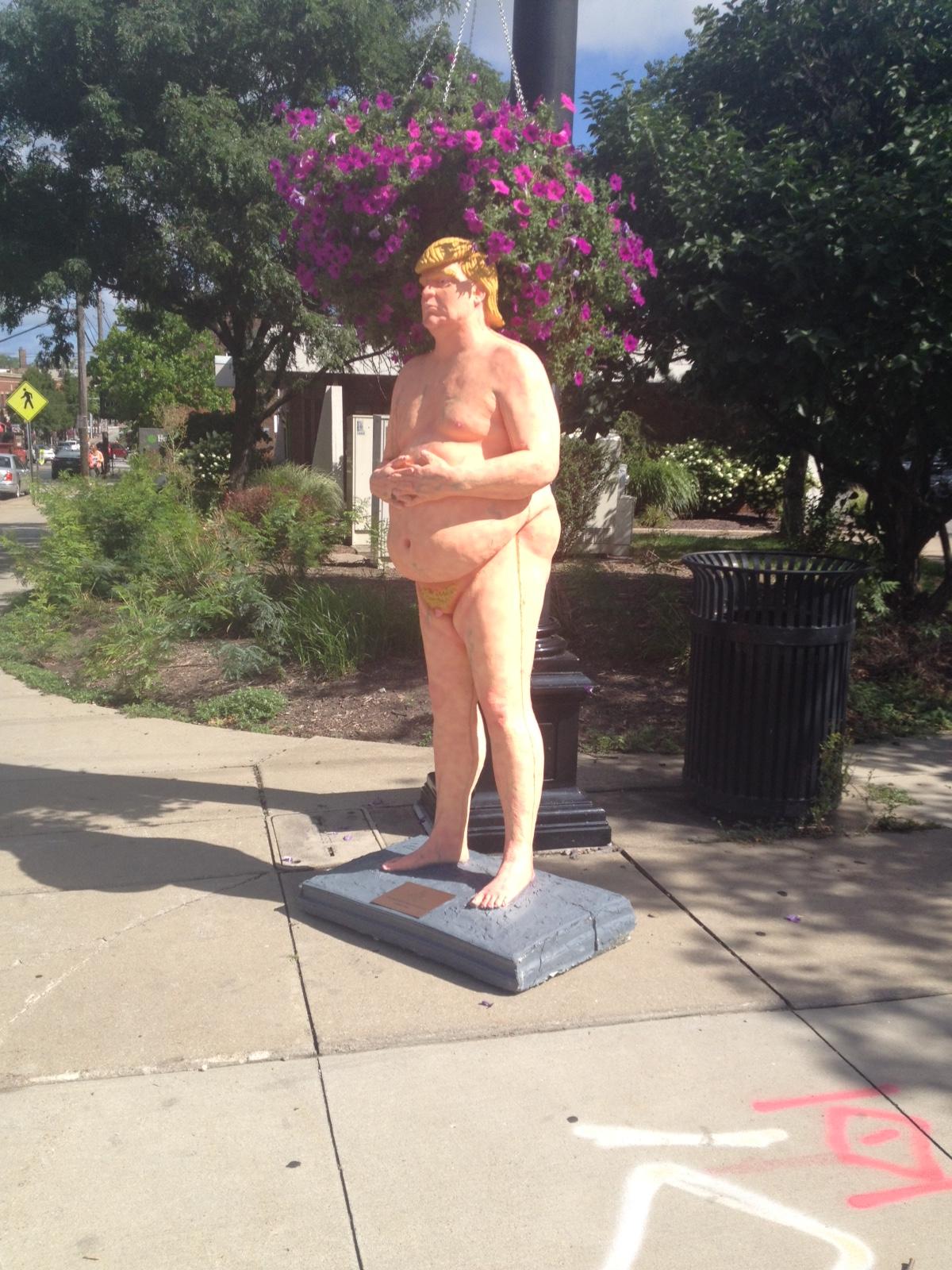 What responses have you been getting?

There were a few people I’ve seen that have ripped it apart. I knew there were going to be some negative reactions, but for every one person that hates it there are two or three people that love it. That’s exactly what art is supposed to be. Art is supposed to stir up emotions and get reactions out of people good or bad and this definitely has accomplished that and then some. I knew it would be a large reaction, because as an artist you want someone to see your work, but unfortunately for artists that often doesn’t happen until your dead. I knew the publicity of this was going to be huge, INDECLINE are the ones that installed it, they paid for all of the materials, so for them to put my art out there in the way that they did is massive. I couldn’t ask for better publicity. 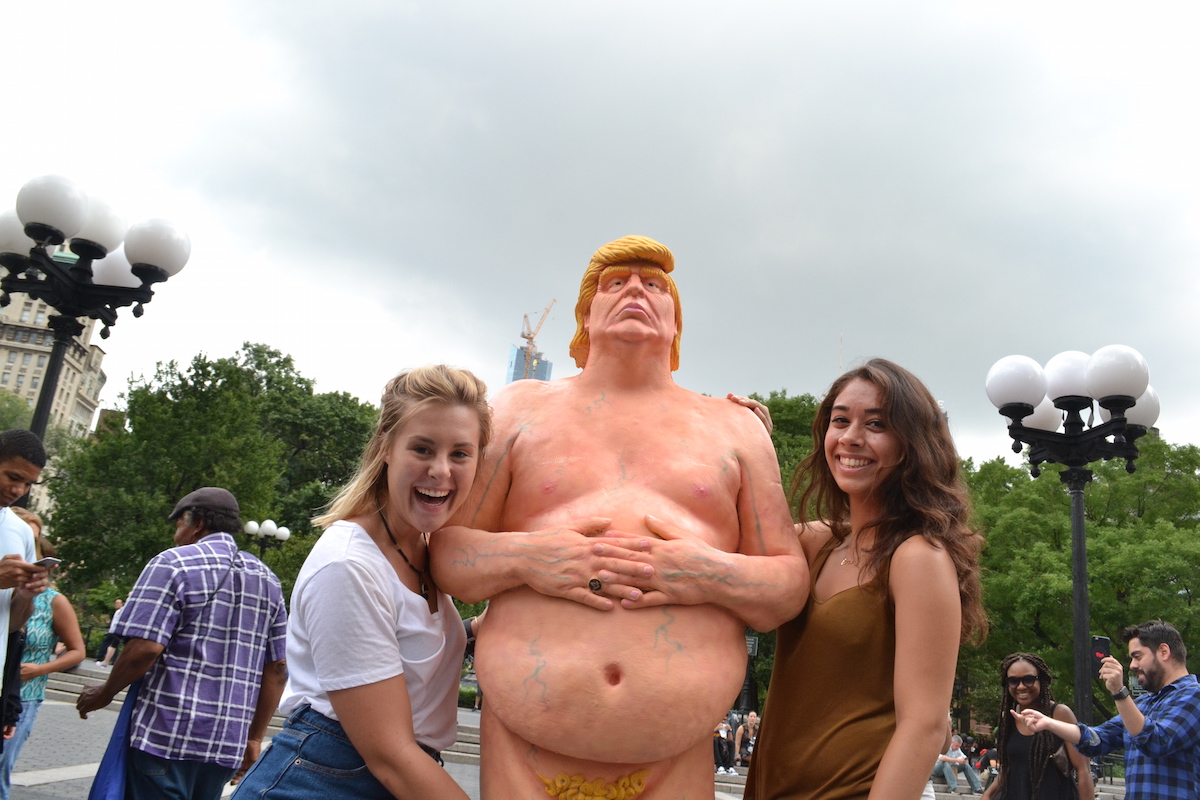 What are some of your favorite reactions about the piece?

When I woke up this morning, I knew it was going to be a bit of a circus. When I first woke up, there was nothing but slowly it just started getting more and more attention. I was seeing it go absolutely viral on Twitter and seeing some of the responses and the stuff people were posting was incredible. I think one of my favorite quotes I’ve seen so far is “Ginger’s naked Trump statue is what makes America great” and that made my day. People were making statements like “if this was about Hillary it would be torn down because of the misogyny” and I think that’s true. They are actually talking about having me do a Hillary statue which I would be so gung-ho about, and that one would actually get me a lot of hate mail because I detest Hillary. I detest her and everything her and husband stand for.

What kind of reactions did you want to come from the piece?

The piece wasn’t my political statement, it wasn’t my intentions I was just the artist that made it. Down the road I would like for this to hopefully open up some doors for me, where you know I don’t have to do my day job, and I can make a substantial living being an artist.

You have become a large advocate against Trump, how did this piece play a role in this?

I’m so burnt out from lack of sleep the stress of doing this ,and I have a very demanding job where I’ve been working extremely hard and instead of being able to go home and relax, I’ve been having to toil away on this statue. Looking at his face day in and day out at home has developed a little bit of resentment, and the things that come out of his mouth are just amazing.To hear the things he says, and the hate he says is ridiculous.When I first started I was actually wanting to vote for Trump, because there were certain things he says he stands for I agree with, but then some of the things he says are just way out of left field.The final straw for me was when he made fun of the disabled reporter. I have family members I love dearly are disabled and for him to sit there and act like that just shows his true character and what he is like as a human being, or lack there of. There is no way I could vote for him after he did that. 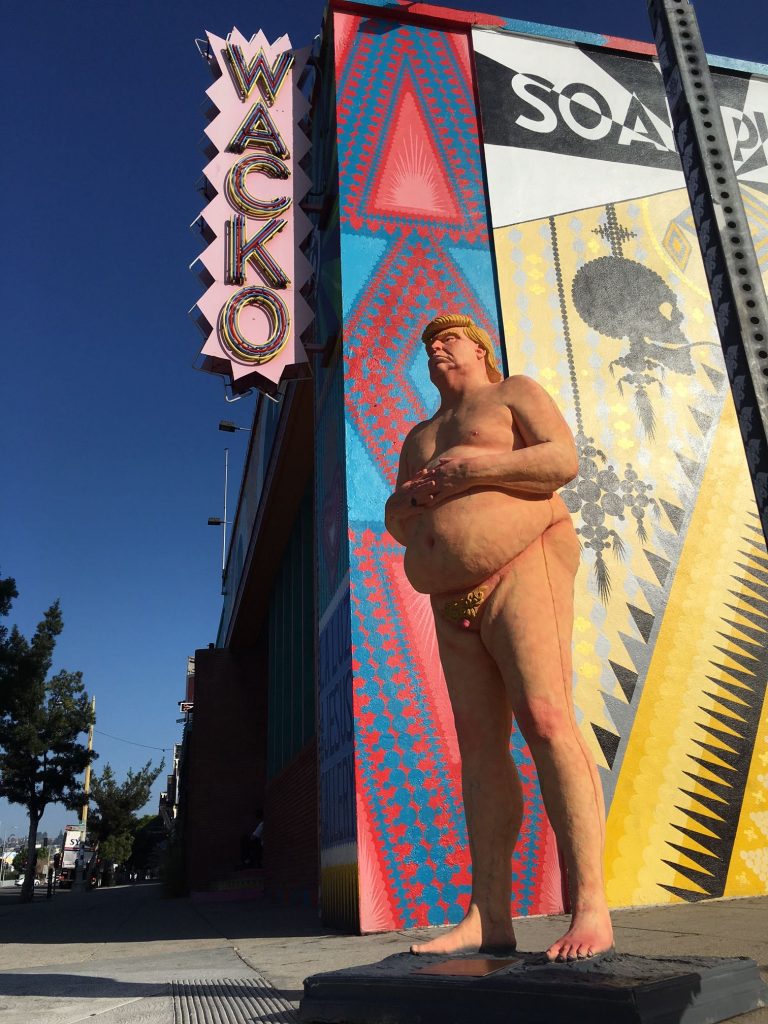 Have you done anything to speak out against him since creating the sculpture?

I’ve always been aware of the political realm and things going on. I have not posted anything anti-Trump until this point, because I wanted to keep this under wraps. I’ve actually been more of an anti-Hillary person. I am extremely anti-Hillary.

Who do you think the best candidate in this election is?

Gary Johnson is getting my vote. I would love to see a Rand Paul, but he was politically skewered by the media and the talking heads that don’t want someone like him running this country, because that would throw too much of a monkey wrench into their gears.

If you had to say something in response to Trump about the statue what would you say?

I’m hoping to get a response from him. I would love to see what he thinks about it. There is a sculpture from Georgia, that made a bust of him, and there were photos of him just gloating over the statue about how proud he was, because he is definitely an egomaniac and a megalomaniac. He loves himself, so let’s see what he thinks of this statue. I’m hoping to get a response out of him.

How is Trump related to the monsters you create in your previous works?

This was a learning process. I’ve never done a statue like this before, everything I’ve ever done is Halloween based. I’ve only ever really made monsters, and Donald Trump definitely is a monster. It was something I wanted to do, and I didn’t know I could pull it off, but obviously I did.  Everyone knows what Trump looks like, so I had to try to work very hard to get the face to look like Trump. That was probably one of the hardest aspects of doing the sculpture.

You just said Trump is a monster, could you explain?

Trump definitely generates a lot of fear in a lot of Americans and other people around the world. The things that come out of his mouth have definitely brought a lot more tears to people’s eyes than Freddie Krueger has. He is definitely a scary individual.