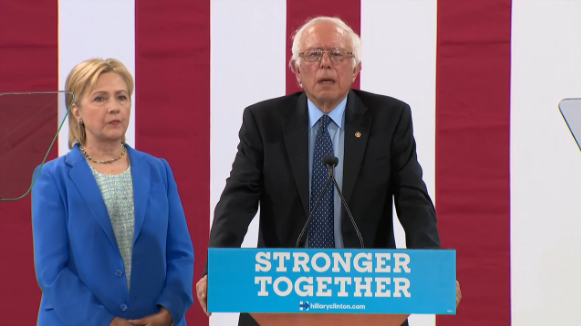 The dream is dead

Over a month after losing the Democratic nomination, Sanders today spoke at Portsmouth New Hampshire, a city and state he won by a wide margin, and endorsed Hillary Clinton to become the next President of the United States.

He told crowds: “This campaign is about the needs of the American people and addressing the very serious crises that we face and there is no doubt in my mind that as we head into November, that Hillary Clinton is by far and away the best candidate to do that.

“Secretary Clinton has won the Democratic nominating process, and I congratulate her for that.

“Hillary Clinton and I have disagreed on a number of issues, that is what this campaign has been about and that is what democracy is about.”

Hillary said: “This election is going to be much more enjoyable now that we are on the same side, because we are better together.

“And with your help we are working to defeat Donald Trump.

“Surely we can agree that weapons of war have no place on the streets of America.