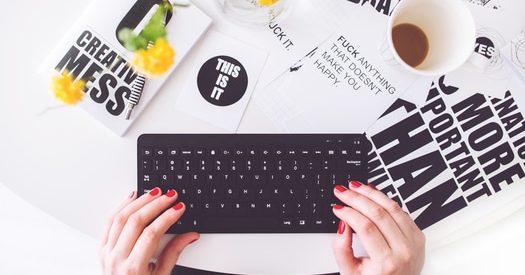 Did you even read my resume?

Like any recent graduate, I’m all for getting any advice I can on how to make my resume stand out among hundreds of other applications. It’s hard to talk yourself up and prove how valuable you can be when most of your job experience is from your summer job. But I’ve applied for more jobs than I can count at to this point. Actually, I can count. I have a spreadsheet. 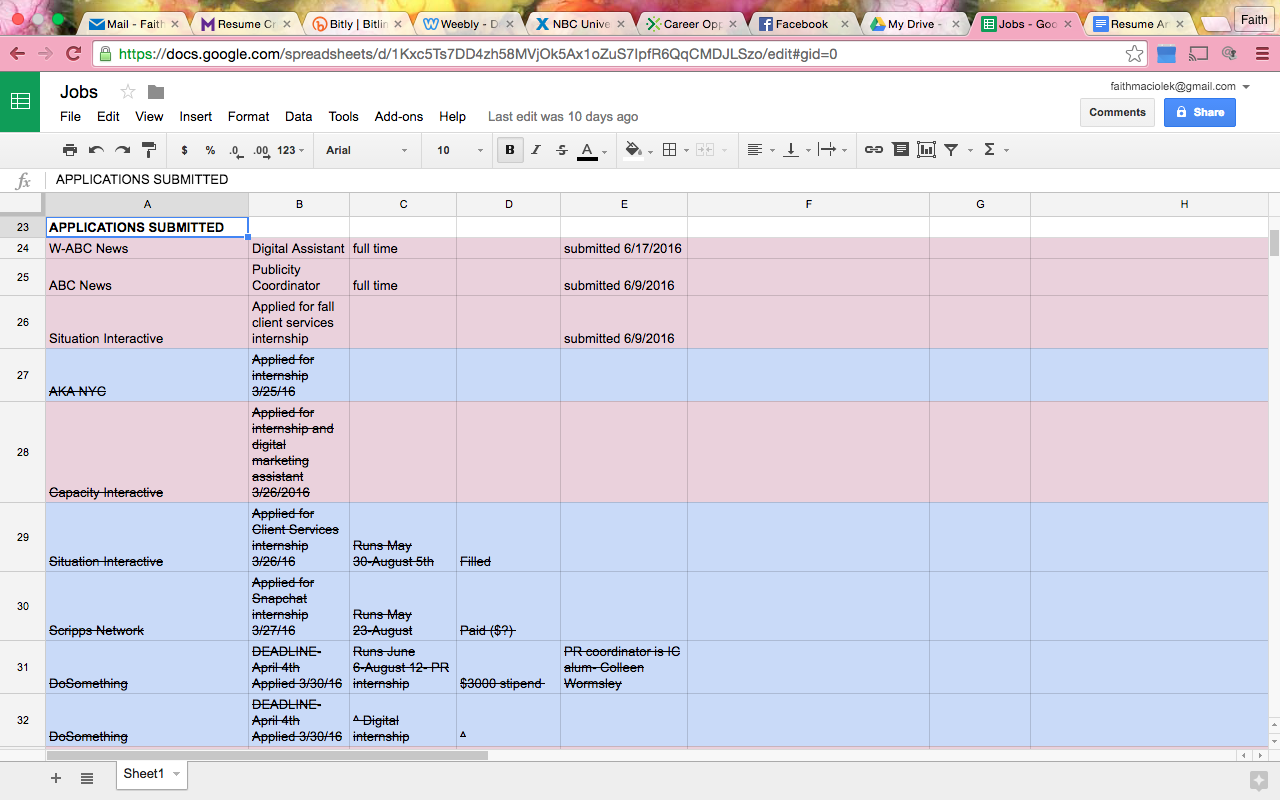 And those are just a few

And making three different resumes, picking different themes to fit different positions I’m applying for, and trying to fine tune my skills has gotten me a whopping: one interview. (Spoiler alert: I didn’t even get the position.) So when I saw that a job searching site offered what they call a “free resume critique,” I thought AWESOME! I couldn’t afford their “professional rewrite” on my glamorous guest services paycheck, but I figured I could take their presumably helpful advice and rewrite it myself.

Except no. What I thought was going to be a critique was actually mainly complete crap to try to get me to pay for a professional rewrite.

Right off the bat he mentions something called “The 30-second test,” which I had no idea what that was and he did not explain why I didn’t pass it. Upon a quick Google search I discovered it meant employers spend 30 seconds or less on your resume to determine if they want to interview you. Am I too wordy? Am I not wordy enough? Am I boasting? Am I too modest? I’ll have to figure out how to pass the test, no thanks to Mr. Critiquing Man.

Apparently the resume I uploaded to be critiqued was “visually uneven” and “not polished,” which is cool. I made three of them. Maybe I just won’t use that one. But all the templates were taken from resume building sites, so if they weren’t successful resume templates, I can’t imagine why they would still be on there.

He also said my phrases were too short, but I don’t really know of a way to explain “sold season passes” or “drafted press releases” in a way that “conveys something new or interesting” about me. And I’ve been told all my life to keep my resume to ONE page, that employers wouldn’t even consider anything more than that. So if I’m too brief, I don’t pass the 30-second test and I don’t get hired. If I’m too explanatory and over a page, I’m boring and excessive and I don’t get hired. Either way, I don’t get hired. (And the professional rewrite seeds have been sown…)

Now we get into the meat of my “you’re full of crap” story. And just to clarify, I don’t believe the advice was crap. I’m sure it’s helpful under the right circumstances to the right person. I just don’t believe it was tailored to ME.

Anyway, as an entry- level employee, I have an objective statement at the top of my resumes, which *hallelujah* he liked.

When he gets to my job duties, he says I’m a “do-er and not an achiever,” and “task-based and not results-based,” which (gasp!) is a common mistake for non-professional resume writers…

When I followed up with him and told him basically 80% of my work history is internships, so naturally I wasn’t really given a whole lot of impactful “results-based” work and how could I fix that, he said “I can understand that as a young professional, you may not have as many achievements you can market to a prospective employer, and that is ok if you are looking for an entry-level or associate position. As you progress in your career, remember to update your resume to reflect your achievements.”

… I am 100% an entry-level worker. Hence me coming to you for help, which I have received none of.

Next, he claimed he put my resume through the software that “93% of employers use,” which if true, would be invaluable to know. I could literally get inside the mind of the robot deciding if I make it past the chopping block. But given the skepticism I had felt up to this point already, I was a little hesitant to trust it. Then he says these were my results:

So apparently, this software COMPLETELY ignores my degree, previous work and job descriptions, and focuses solely on the five sentences of skills I have listed. Skills like Photoshop and Adobe Premiere are skills I need as a journalist, and my skills have been chosen based on the desired qualifications of jobs I’ve been applying to. Also, that seven years experience is so misleading, because it’s hardly relevant to my desired career. It was at a waterpark, not The New York Times.

And the real kicker: The top reason I’m so peeved about this pretty blatant advertisement for the expensive professional resume, is because as I was searching for whatever the hell the 30-second test was, I came across this on a woman’s blog: 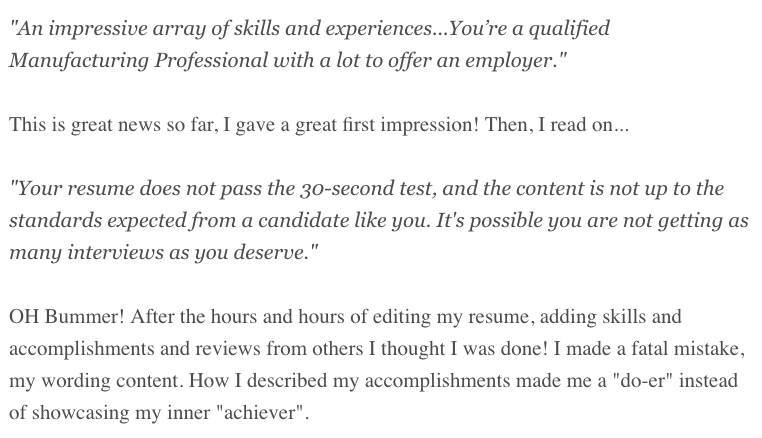 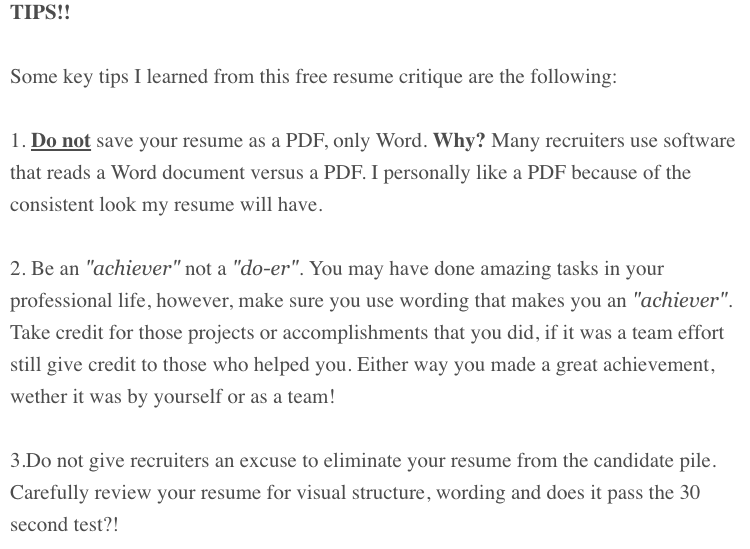 THAT sure sounds familiar! Almost verbatim what my critiquer told me. And it was from a different resume site than I had used no less. So basically I now get roughly four emails a week from this man trying to get me to buy their professional rewrite, when all he did was send me his handy-dandy critique resume. This is why I have trust issues…

I had been filled with so much hope when I thought I had finally found a professional to look over my resume. I was searching for any answer as to why, even though I seem qualified, I’m just not getting interviews. Sadly, it looks like my wondering will continue until that magical day someone says “You’re hired.” My advice to you (free of charge) is to just be smart, and be honest in your resume. Que sera, sera. Your skills will shine and your hard work will eventually pay off.

(But if you do happen to have a couple hundred dollars laying around for the professional rewrite, go for it, and then report back. I may be bitter, but I’m still unemployed. Help a girl out.)