Hillary vs Hillary: How she’s flip-flopped over the years

What does she stand for?

Politics these days leave a lot to be desired in terms of consistency. Luckily, with the help of modern media, it’s possible to make games of he said-she said very short, because the internet definitely has what they said. Hillary Clinton has come under fire a lot recently for her inconsistent views on important topics, so let’s take a look at what she said;

Present: Clinton’s website states that she wants to defend women’s health and reproductive rights, close the wage gap, confront violence against women, and increase the minimum wage so as to “help close the gender pay gap, lift millions of women out of poverty, and have a ripple effect across our economy.”

So she’s a woman for women’s rights, right?

Past:Her website also mentions that she helped start Arkansas Advocates for Children and Families and worked at the Children’s Defense Fund after attending Yale.

However, after she did all that work with Advocates and the CDF, there are spots on her record. Clinton allegedly had a different opinion about helping women when it came to defending her husband according to Carl Bernstein who wrote the Hillary Clinton biography “A Woman in Charge.” He described her reaction to the allegations of Bill Clinton’s adultery by Gennifer Flowers as “aggressive” and spoke about how she immediately took the campaign in a direction to discredit Flowers.

Not to mention that 1975 rape case to which Clinton was assigned involving a 12 year old girl. An audio clip from a 1980s interview about the case was released by the Washington Free Beacon in which Clinton talks about negotiating a plea deal that got the 41 year old suspect only 1 year in jail when he was facing up to 30 years and where she mentions that the suspect’s ability to pass a polygraph “destroyed [her] faith in polygraphs.” During the case, she also tried to explain the accusations by telling the court that victims the age of the girl had a tendency to exaggerate sexual experiences and that this particular girl had a tendency to seek out older men,. 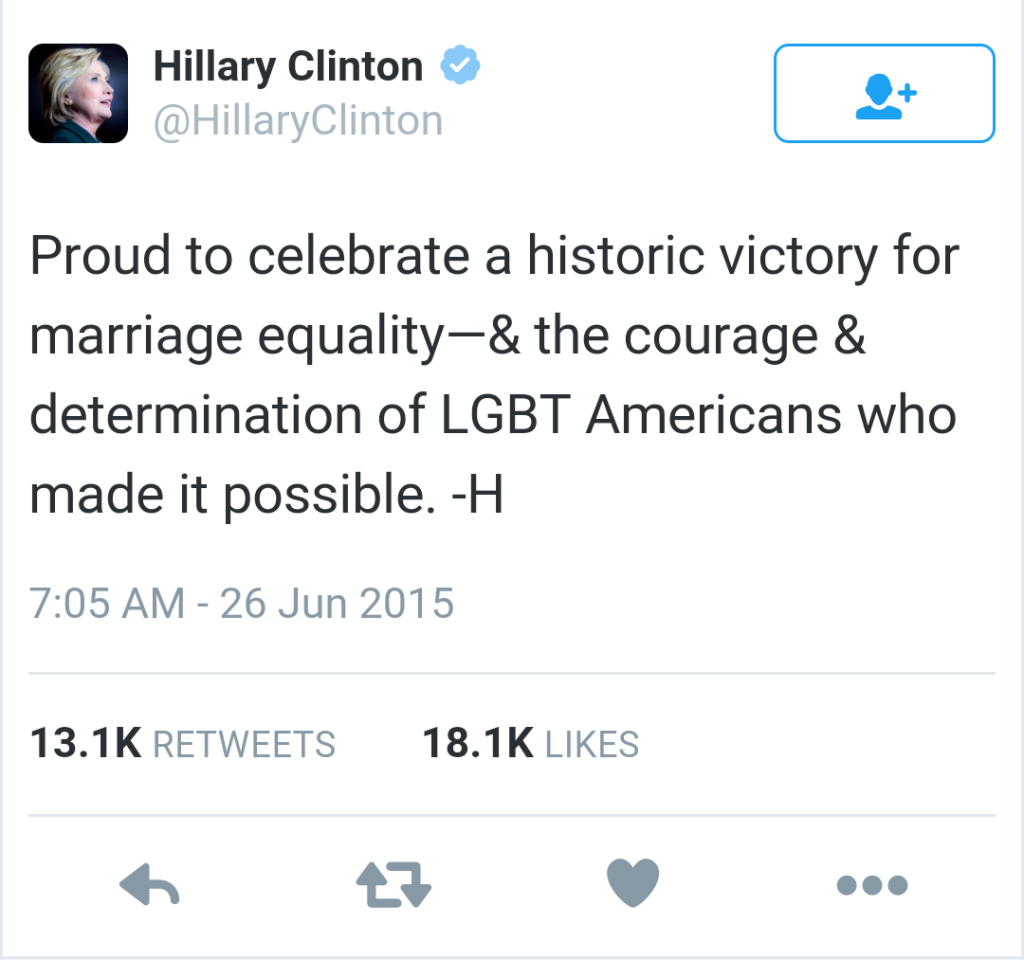 Past: In 2004, Hillary Clinton gave a speech to the senate opposing an amendment to the constitution which would have recognized same sex marriage, stating “I believe marriage is not just a bond but a sacred bond between a man and a woman” and attempting to convince the senate that high divorce rates were more of a problem.

Present:  In an an April 2016 interview with NBC news, Clinton supports her long held pro-choice views.

Past: Hillary Clinton has consistently stated that abortion should be “safe, legal, and rare,” a phrase that has been popularized by the democratic party.

Present: Her website currently states her intention to “Enact comprehensive immigration reform to create a pathway to citizenship, keep families together, and enable millions of workers to come out of the shadows.”

Past: She was a cosponsor of Senator Ted Kennedy’s 2004 bill, the S.O.L.V.E. Act which repealed barriers to reentry for unlawful presence in the U.S. and  created a “transitional status for certain aliens who do not satisfy earned adjustment requirements.” She also expressed, while running for president in 2008, her intention to pass immigration reform,

Past: Clinton gave several speeches starting in 2013, to Wall Street, starting at the Goldman Sachs “Builders and Innovators” conference. These speeches have never been well documented (media has even been refused entry) and Clinton is refusing to release them and has stated her reason for doing so as it not being the precedent which has been set.

Present: She has also accepted millions in campaign donations by bankers and Wall Street investors, though her website states her intention to ” tackle dangerous risks in the big banks and elsewhere in the financial system” and to “hold both individuals and corporations accountable when they break the law.”