I was probably the most embarrassing Facebook user of all time when I was 13. Excessive lettering, telling people to “txtttt it”, documenting my every move and more was my go to Facebook post. Did anyone actually care what I was doing? Probably not, but I went and exposed myself to the world in the only way a 13 year old knew how.

After a year or two of living through these truly awful Facebook statuses again thanks to the app Time Hop, I wondered what it’d be like if people today still posted statuses like we used to. Would people actually listen to me when I put “txt it” after my status? Would it get likes? Would any one ask me if I was OK and why my grammar was so bad? The questions were endless, and my intrigue got the best of me. So, I decided to pretend like it was 2010 on Facebook.

This was the first status I posted. I was going to the movies with my boyfriend, which I normally wouldn’t dedicate an entire post to.

The next day got a little more attention than my first post. 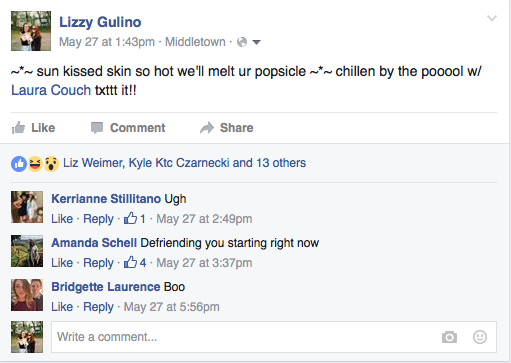 As you can see, my friends weren’t really into it. But I was determined to keep my statuses going despite them making fun of me.  I was resilient. 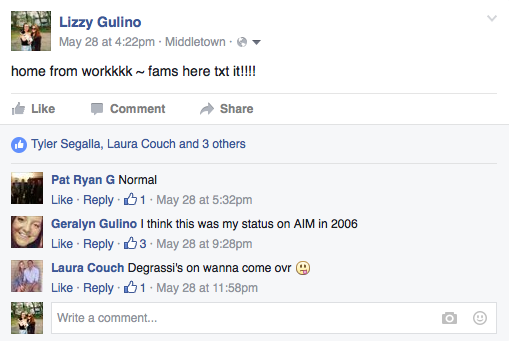 The statuses were slowly losing their shock factor and gaining less and less likes from friends. Sad day to be a Facebook status poster. Even my sister understood the time period that my status belonged in.

Another day, another sad Facebook status that gets no love. The only thing I have to look forward to from this experiment is watching Jojo try and find true love on The Bachelorette tonight.