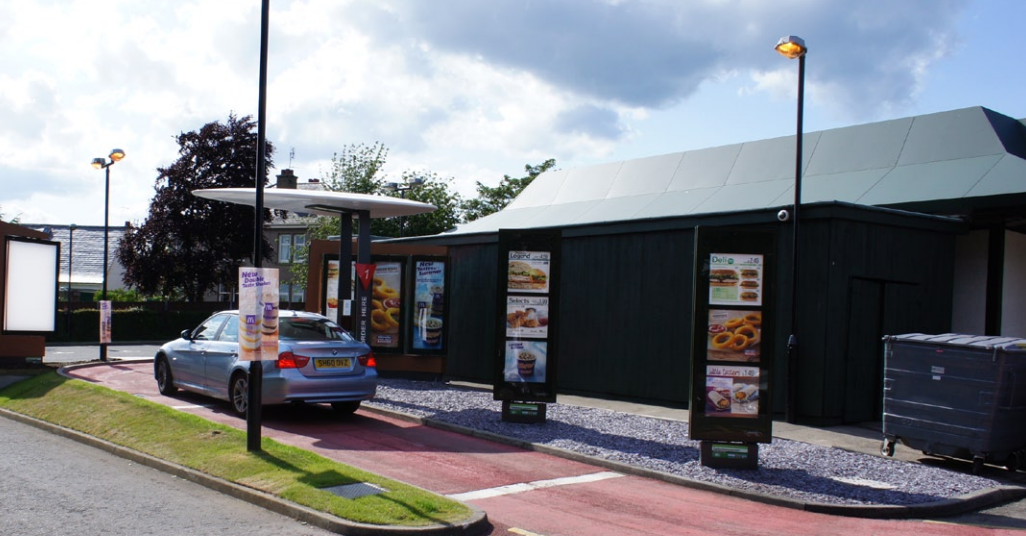 What it’s actually like to work in fast food

I’ve worked at Arby’s, Subway and Cook Out

With the strikes demanding the rise of minimum-wage popping up across the nation, fast food workers have been under extra scrutiny lately. I’ve seen people form arguments like, “would you come to my house, make me dinner, and clean up afterwards for $4? Probably not, but that’s what a fast food worker might do in half an hour,” and others point out any mistake in their order, using it as a reason to not raise minimum-wage. Society has a tendency to look down on fast food workers, labeling it as a remedial job that anyone could do, but what is it really like to work there?

I’ve worked in three fast food places: Arby’s, Subway, and Cook Out. I’ve also worked in two local bakery/café-combos and my parents’ antique shop. I can definitely say, without a shadow of a doubt, that the most stressful of these jobs were the fast food ones. Subway much less so than the others, but that’s mostly due to the lack of a drive-thru (the reason for the focus on speed).

While it is true that virtually anyone can be trained to do the work these jobs require, it takes training and ongoing improvements to do the job well. 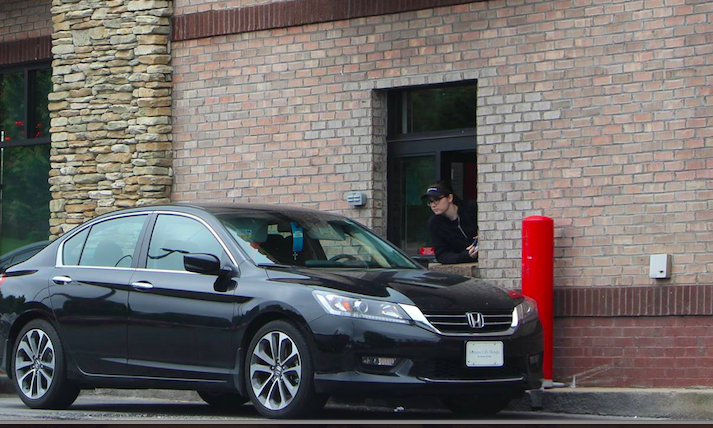 It should come as no surprise that fast food joints with drive-thrus are all about the speed. It’s crucial to get the order in accurately and as fast as possible so you can get the customer served and out within a reasonable time. Most of these places have timers hanging from the ceiling that start as soon as the car pulls up to the window and don’t stop until the car pulls away. Each store has a different speed goal (aka how long we should have the cars sitting at the drive-thru) and it’s very important to meet it.

Each store has certain call-outs (things you must yell back to the kitchen as opposed to just putting them in with the order) that are usually for the things that take the longest amount to cook. The purpose of this is to make the customer’s wait even shorter. At Arby’s our call-outs were for the side items that took a long time to cook in the fryer: mozzarella sticks, onion rings, etc. Cook Out, however, had several call-outs that all had to be memorized before you were allowed to train at the drive-thru.

As you can imagine, some people like to sit at the window before leaving. I remember one particular occasion the customer had his food and should have left, but instead sat checking his phone before his departure. My manager came running up to the window, “why are they still here? Do they need anything else? GET THEM OUT OF HERE!” So, I opened the window and tried to get the customer’s attention. He rolled down the window, said he was fine, then proceeded to still sit there checking his phone. My manager rushed back up to me, “why is he still here? You need to get him out of here!” To which, I sassily responded, “what do you want me to do, climb in there and press the gas pedal for him?”

The lobby is much more calm, however, there’s more work to be done. The larger-sized buildings will usually assign workers to clean the lobby instead of leaving it to the lobby register workers, however, the smaller ones expect the lobby cashiers to handle that.

In those places, the person working the register is expected to keep the lobby clean, take the trash out, keep the tea stocked, keep the bathrooms clean, keep the ice stocked in the soda machines, take the customer’s order, help bag orders for drive-thru and lobby, and help keep the drive-thru stocked, all while never missing a customer. It can be very stressful.

These fast food places were by far the most tiring jobs I’ve ever had. You spend all day on your feet, rushing around, doing heavy lifting and lots of cleaning. They aren’t difficult jobs, but are very tiring and stressful. Considering most workers in these places, like me, were going to school while working, the days can prove to be beyond long. You get home from a six- or seven-hour shift to finally tackle your mountain of homework while struggling not to fall asleep. As you can see in the picture below, the attempts to stay awake weren’t always successful. 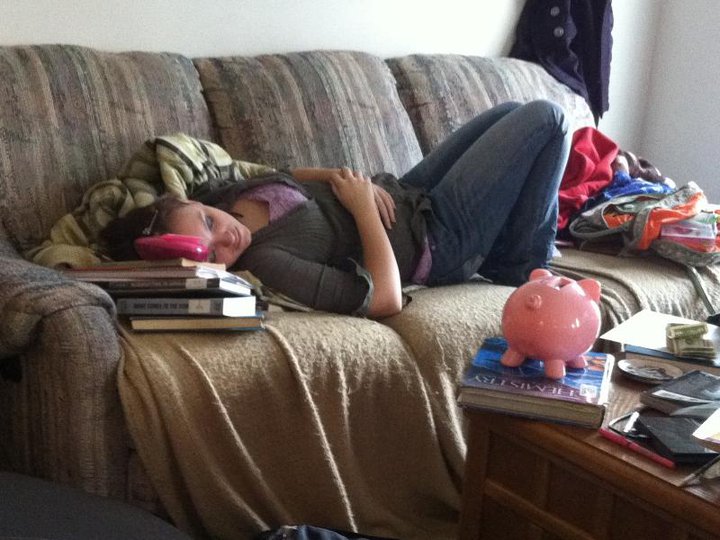 After an exhausting day of work, I fell asleep on top of my homework. 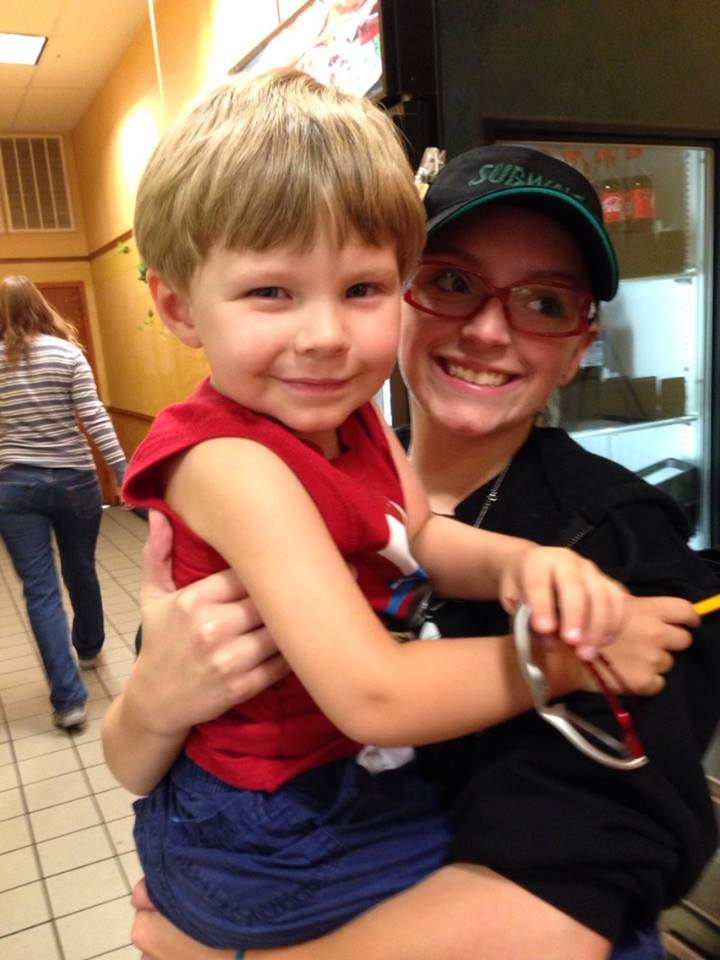 Subway was definitely a horse of a different color. Some Subways have drive-thrus and, I imagine, function much like the previous description. However, mine did not. Because I was in school, I hardly worked with our manager. She worked the day shift and I usually went in at three or four, after she was gone. That being the case, there’s a little more work required of you, but it’s much more relaxed. Speed is still important, you don’t want to be too slow or customers will leave, but no one’s breathing down your neck and yelling at you to move ever-faster.

A typical day at Subway involves making bread and cookies, stocking the cambros (little square containers holding the sandwich fixings), cleaning, charting temperatures for the food, and, of course, making sandwiches for the customers.

Like every other job, Subway has stresses, but overall it’s a terrific and chill place to work. They’re great to their employees, offer tons of raise opportunities, and typically are very flexible with schedules (perfect for students).

Though you don’t need a college degree to work in fast food, that doesn’t mean the employees are lesser people. Like all jobs, fast food takes training, hard work, and dedication. So next time there’s a mistake in your order, instead of complaining on social media that that’s proof they shouldn’t deserve more pay, remember that these employees are human and thus mistakes are possible.

Do not belittle them for their hard work, merely because you think it’s below you.